Or Give Me Death: A Novel of Patrick Henry's Family

"When do you tell the truth and when do you lie? Is it wrong to keep a secret, when if you tell, someone gets hurt?"

Sarah Henry, wife of the famous statesman Patrick Henry, is losing her mind, and she's secretly being kept in the cellar because she is a danger to herself and her children. Daughter Anne has a secret, too. She knows which child will inherit Sarah's madness, and she'll pay any price to protect her siblings from this information.
With insight and compassion, Ann Rinaldi explores the possibility that Patrick Henry's immortal cry of "Give me liberty, or give me death," which roused a nation to arms, was first spoken by his wife, Sarah, as she pleaded to be released from her confinement. Told from the point of view of Patrick Henry's children, Or Give Me Death eloquently depicts the secret life and tremendous burdens borne by one famous American.

I WAS THE FIRST ONE in the family to know when Mama started to go insane. Somewhere along the line, when Pa was away speechifying against all those laws and writs and resolutions, she took leave of her senses.

I didn't want to admit it at first. Mama's tired, I told myself. Too much time alone. But then one day she dipped baby Edward into the basin of water because he was fretful.

Dipping a baby in water is no reason to think somebody is addled. But Mama wasn't about to take him out.

Baby Edward was just two months old, and he'd been crying for hours already. Nothing Silvy or Pegg or any of the other Negro servants did would stop him.

"The water will becalm him," Mama said.

But she had that same look in her eyes that I'd seen the day I found her in the middle of the English garden trying to take all her clothes off, and talking about how the sun was her only friend. I got her inside right quick. That was the day she found out Pa was leaving once more.

"The House of Burgesses again." She looked mournful sad. And after that day she just went all inside herself.

Edward stopped crying, sure enough, when she put him in that water. He near turned blue.

"Mama," I said, "Mama." But gently. Lest she get a purchase on him that I couldn't break. She paid me no mind.

So I pulled my little brother out of the water. He was choking by then, and I did what Pa had taught me and John to do in case one of the other little ones fell into New Found River. I set him down on the wood table and pushed his chest until he got his breath.

"I can't abide his crying anymore," Mama was saying. She just kept saying it, over and over, while I set about getting Edward breathing, and Pegg, our cook, started praying to Jesus then and there.

Soon the commotion brought Pegg's children, who were always underfoot, anyway. From Shadrack, the oldest at twelve, to Nancy, Pleasant, Jessee, Reuben, and even Letty, the two-year-old.

"Get the children out!" I ordered.

Pegg shooed them out.

"Take Mama to the front parlor."

She led Mama away.

"And keep a still tongue in your head." I was stern but kind, the way Pa had taught me to be with the Negroes.

But Pa was away again. Likely riding through the countryside to stop and call at taverns, stores, and plantations to talk about the new evils sent to us by the king. While he did not know of the evil going on here at home under his own roof.

Nobody in the family did yet. Except MyJohn, my intended. My betrothed. So far I'd managed to keep it between me and MyJohn.

I wrapped Edward in dry clothing. He was making little wheezing sounds. I put him in his cradle and went from the detached kitchen to the main house. I ran in the back door, through the long hall, where there were bloodstains on the heart-pine floors because of a duel once fought here. I was careful not to step on the bloodstains. All of us children were convinced it was bad luck to step on them.

There was nobody in the front parlor. What had Pegg done with Mama? I stamped my foot on the wide floorboards.

All eight rooms and the great hall were empty.

I ran upstairs to the top floor from where you could see Carter's Mountain and the foothills around Charlottesville.

I ran back downstairs to the cellar. In the rear was the bricked-up dry well.

It wouldn't be the first time Pegg had put her in there. "Bring her around," she'd said, last time. "Freeze the devil inside her."

"There's no devil in my mother. And don't you ever do it again!" I'd shouted.

I heard Mama crying behind the old, thick wooden door.

The dry well was old, old as the house itself. Old as the devils that tormented my mother. Pegg was right about that, but I'd never admit it. It was deep, too. Twenty-five feet long. The food was stored there in terrible coldness.

"Pegg put me here. She said I near killed Edward. And I must pay for my sins."

"Mama, you haven't killed Edward. I've got him breathing right, and he isn't crying anymore. I'll find the keys and let you out."

"Then why don't you open the door, Mama?"

"Pegg said I must stay here an hour. And pray. You'll tell me when the hour is up, won't you?"

Pegg! How dare she order Mama about, the mistress of the place! I felt a stab of fear. "Pegg is wrong, Mama. She had no right to do this to you."

"She said she'd tell your pa when he comes home, if I don't stay here an hour."

I leaned my forehead against the rough, old, thick wood of the door. I must becalm myself. Tell Pa? How dare she? If it was anyone's place to tell Pa it was mine. I knew I should tell him. Maybe I should write to him now. What would happen if I told him?

What would happen if I didn't? Would Mama kill Edward some other time, when I wasn't around to protect him? Would she put a pillow over his face at night? What would I do then? Still keep her secret? Say he died in his sleep? Babies did sometimes. Dark, unexplainable things happened all the time in the outlands of Virginia.

Look what had happened to Charles Chiswell, who'd once owned this very house. His son John ran his friend through the heart with a sword at Ben Mosby's Tavern at Cumberland Court House. All over a card game. Got away with it, too. It's what Pa calls the corruption of the aristocracy.

Mama is aristocracy. She is descended from Alfred the Great. Also King Edward the First. She has fourteen barons in her family. Surely that's too many barons. One lady ancestor, Mary Shelton, was lady-in-waiting to Queen Elizabeth.

"Mama, please open the door. Please. I'm saying you can come out now. You are the mistress of the plantation. You don't have to mind Pegg. And I won't let her tell Pa."

From behind me then came a clattering of shoes down the wooden steps, voices like a flock of blue jays. My brothers and sisters, come to gawk.

"What's wrong, Patsy?" It was John, my brother, a year younger than I, a head taller. He'd be tall, like Pa, John would soon. The same blue eyes, too.

"Get the children out of here," I told him.

Beyond stood Will, eight; Anne, seven; and Betsy, two, all staring.

"Where's Mama?" Anne asked. She sensed things. I was convinced she had uncommon powers. She always did know things she shouldn't, and was alert to every superstition and old-religion belief of the Negroes. She was a special pet of Pegg's, always getting treats from her in exchange for information. I know Pegg used her against me.

No matter. I'd deal with Pegg and Anne both.

John ushered them up the stairs.

I waited until I heard them running through the hall overhead, screeching and laughing like the little barbarians they were. Pa spoiled them, let them all run wild. No wonder Mama was going daft.

Then I heard the creaking of the dry-well door as it opened. I turned.

Mama stood there, shivering so she couldn't stop. She'd catch the ague if I didn't warm her, just like I'd had to warm baby Edward.

I grabbed her by the shoulders, which felt thinner than they looked. "Mama, come on out of there right now," I ordered.

She obeyed. I slammed the door shut. The keys jingled when she handed them to me, she was shaking so. Quickly I locked the door.

She came along. Abovestairs I put her in the front parlor, where a fire burned in the hearth. I wrapped her in a blanket. Lordy, I was tired of a sudden. I wished somebody would sit me down and wrap me in a blanket and give me something comforting to drink. 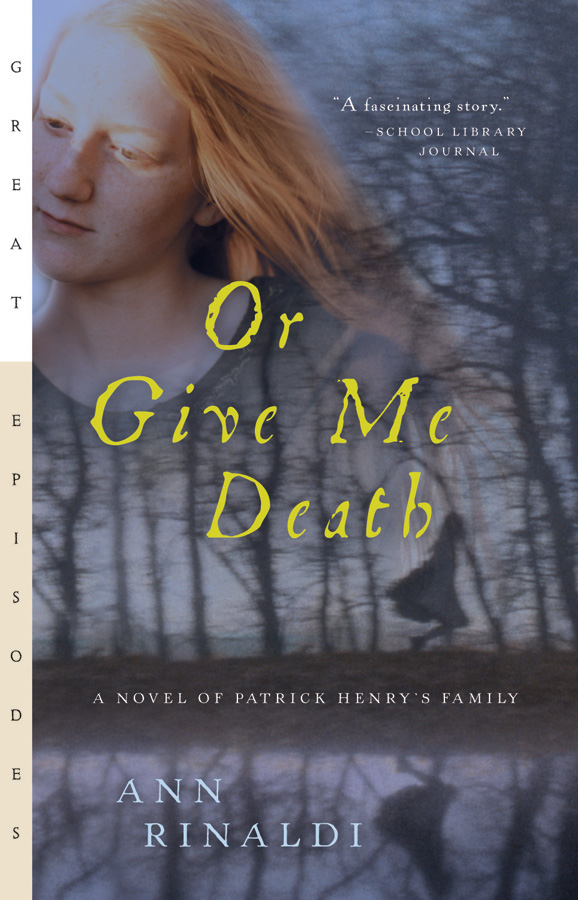