Once Upon a Marigold

Who knew love could be so amazing—and stupefying? Not Christian. He was clueless when he started spying on the royal family through his telescope. He lives in a cave with a troll for a dad, after all. If his dad had only warned him about all that mind-boggling love stuff, maybe things wouldn't be such a mess. But then, maybe, Princess Marigold would be dead.

But Christian wasn't warned. And now that he's fallen for the princess, it's up to him to untwist an odd love triangle—er, rectangle—and foil a scheming queen who wants to take over the kingdom, even if it means bumping off her own daughter.

With echoes of William Goldman's modern classic The Princess Bride, Jean Ferris's hilarious parody of "Once upon a time . . ." overflows with oddball characters and sage observations—and ends with a slapstick happily-ever-after that's full of surprises.

About the author
Jean Ferris

JEAN FERRIS has written more than a dozen novels for young people, including the popular Marigold trilogy. Once Upon a Marigold was named an ALA Notable Children's Book, an ALA Best Book for Young Adults, and a New York Public Library 100 Books for Reading and Sharing title. Ms. Ferris lives in San Diego, California. Visit her website at www.jeanferris.com.

Edric knew he should head for home. It would be dark soon, and even though he was as familiar with his part of the forest as he was with the back and the front of his hand, there were dangers when the lights went out-wild animals, evil spirits, big glowing eyes attached to who-knew-what, stuff like that. But Beelzebub and Hecate were having such a good time sniffing under every bush and barking all the grouse out from their hiding places that Ed was reluctant to spoil their fun. Besides, he'd been having a very good day of gathering.

Some days there was nothing; nobody passing through the forest dropped a thing. But today he'd found a ring with a big shiny pink stone, a collapsible telescope, a book of Greek myths, an almost-new leather jerkin, and a flask half full (he knew there were some people who would have said half empty) of a quite palatable wine-rather frisky, with some floral notes and a nice, lingering, jaunty sort of finish. It had been a very good day indeed.

He heard the dogs yapping their heads off up ahead. Not an encouraging sign. He could tell Bub was working himself into a state, trying to act as fierce as he looked, and Cate was overemoting, as usual. Whatever they were barking at must have gone straight up a tree, taken off for parts unknown, or had a coronary.

"Hey, you guys!" Ed yelled. "Cut that out!" He came through the trees and saw the two dogs-big shaggy Beelzebub and petite well-groomed Hecate-in front of a clump of bushes, carrying on as if they didn't have a brain in either of their heads.

Abruptly they stopped barking. But both noses were pointed at the bushes, both tails out straight and quivering.

"What's in there?" Ed asked nervously. The light was fading through the trees, casting long shadows that wavered and fooled the eye into thinking threatening things lurked in the gloom. Or maybe the shadows weren't fooling at all.

"Would you listen to me?" he pleaded, peering anxiously around as the light grew dimmer. If only he'd thought to bring along some squirrel knuckles, their favorite treat, he could have lured them away easily.

He wasn't supposed to be snaring squirrels, of course, since these were King Swithbert's woods, or maybe King Beaufort's-it was hard to tell where the boundaries between the two kingdoms lay-but who was going to miss a few squirrels when there were so many? Well, the other squirrels, maybe, but he didn't let himself think about that. Hayes Centaur, King Swithbert's gamekeeper, was conscientious (unlike King Beaufort's more laid-back Claypool Sasquatch) and would love nothing better than to catch Edric poaching a squirrel, but even he couldn't keep count of all the squirrels, or tell which were Swithbert's and which were Beaufort's.

Ed pushed his way between the dogs, who were quivering so hard that they sent up a faint hum. He extended the collapsible telescope and poked it gingerly into the bushes. "Hello?" he said tentatively.

Edric and the dogs jumped in unison.

"Who's in there?" Ed demanded gruffly, hoping he sounded seven feet tall instead of his actual three feet, four inches.

"Me," came the small voice. And a handsome little boy with big brown eyes and tousled brown hair-a few leaves clinging haphazardly to it-stuck his head out of the bushes. "Will those dogs eat me?" he asked solemnly.

Edric was so relieved, his knees went weak. "Naw," he said. "This one"-he put his hand on Beelzebub's shaggy neck and felt the dog's shivers of terror-"is a coward who hides behind his big bark. And this one"-he scratched Hecate's ears-"is a show-off who just wants to be the center of attention." Cate wagged her plumy tail vigorously and grinned.

"Who are you?" the boy asked, crawling farther out of the bushes.

"Edric's my name. But mostly I'm called Ed. And who are you?"

"Well, come out of there, Christian, and tell me what you're doing here."

Christian crawled all the way out from the bushes and stood up. "I'm almost as big as you," he said, surprised.

Ed pulled himself to his full height. "I'm tall for a troll," he said defensively.

Ed stuck out his hand and shook Christian's. "Now you have. And what about you?"

"Well, sure. I know you're a boy. What I want to know is, where are your folks? It's almost dark out here."

"I don't know where they are now. They looked for me for a long time, but their voices got farther and farther away until I couldn't hear them at all."

"You mean you were hiding from them?" Ed asked. "Why?"

"I don't want to live with them anymore. It's too hard."

"So you thought you'd live in the forest? Do you have any idea how hard that would be for somebody wearing a...a...What is that? A velvet suit?"

"What should I wear instead?"

"What I mean is, somebody like you doesn't know anything about living in a forest. That cup of tea is definitely not down your alley, if you know what I mean. What would you do for shelter? Food? Heat? Protection?"

"I was going to live in that bush." Christian gestured. "It has berries on it."

Ed rolled his eyes. "I can see I'm beating my head against a dead horse. There are berries now because it's summer. There won't be any in a few more weeks." He considered for about half a second and then said, "You'd better come home with me. I can take you back to your folks in the morning."

Christian's lower lip came out. "I'll go with you now, but I won't go home in the morning. I don't even know where home is."

Ed put his hand on Christian's shoulder. "Let's get out of here. It'll be pitch-dark in a few minutes, and I don't want to run into any more surprises. We can finish this conversation once we're inside. Come on, Bub. Get going, Cate. Let's get this show on the ball."

Cate scampered ahead, throwing herself into her performance as a courageous guide dog. Bub, sticking close to Ed, could feel a sick headache coming on-he always got one after he'd had to be brave-and he could hardly wait to flop down in front of the fire and pull himself together.

"What's that shiny blue stuff up there?" Christian asked after they'd wound along narrow rutted paths for a while, doing their bests not to run into any trees, fall in any streams, or become supper for anything else wandering around out there.

"Where?" Ed asked. "Oh, yeah. Great! That's the cave. We're almost home." The dogs ran ahead and disappeared into the shadows.

"It's blue, and red, and green, and pink, and purple, and yellow, too," Ed said. "It's a big cave with lots of rooms, and in each room the walls and ceilings are studded with a different kind of crystal. I don't know how, but they glow in the dark. Kind of pretty, don't you think?"

"Yeah," Christian breathed as they approached. "It looks like magic."

"Well, maybe it is. I don't know of another cave like it. When I discovered it, the entrance was all blocked by rocks and dirt. I was sick of being a nomad and knew I'd finally found my home. Trolls have to spend at least one hundred years of their lives in a cave; did you know that? It's a tradition. I've been here, oh, must be one hundred and seventeen years now."

In the large yellow-crystal room that Ed used for his main parlor, he built up the fire, stumbling repeatedly over Bub, who was laid out in front of it like a hearth rug, breathing deeply in relief at being safe at home.

For supper there was leftover raccoon ragout, seasoned with wild garlic, onion, parsley, sage, rosemary, and thyme. There were acorn-meal biscuits and new strawberries and the wine Ed had fo... 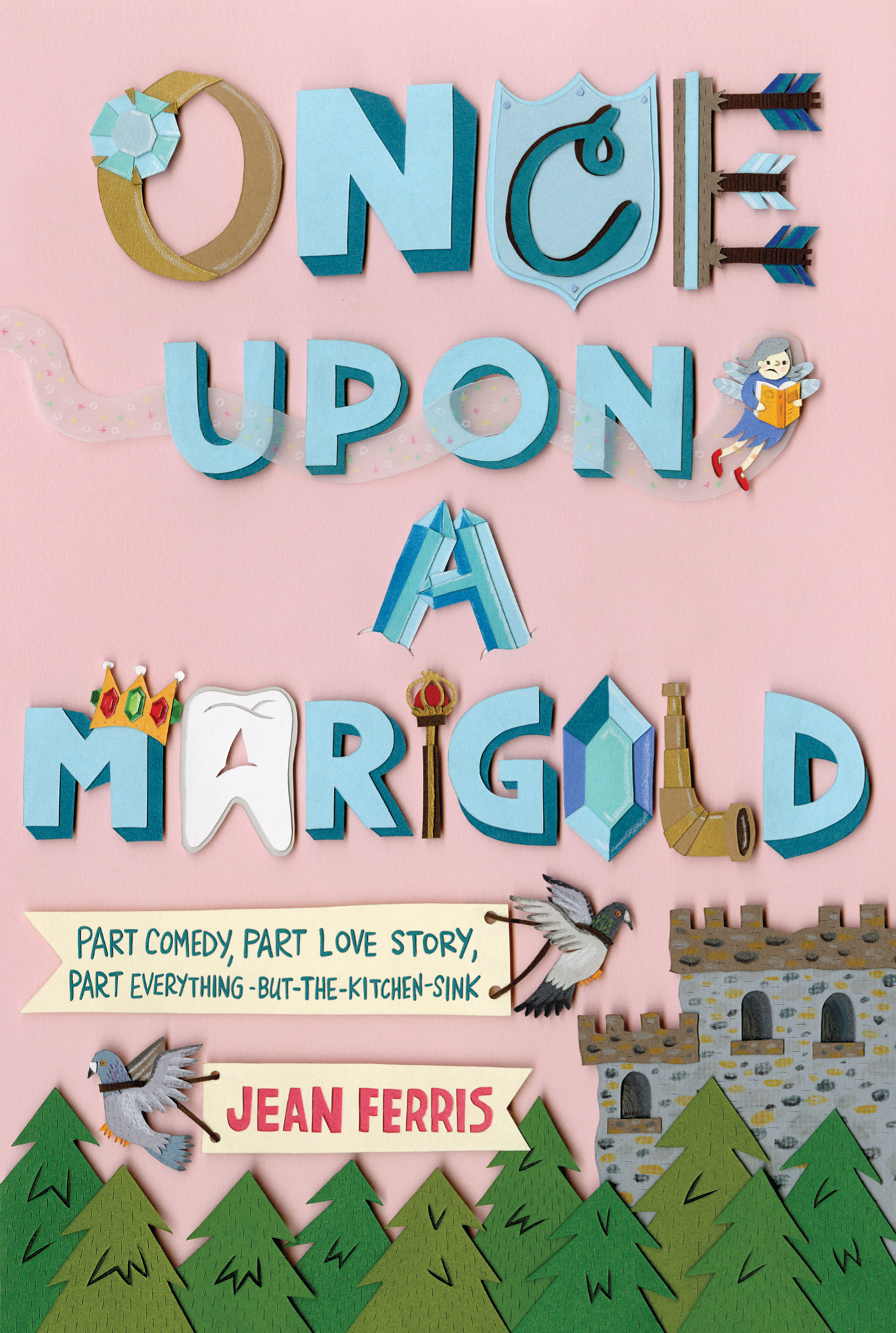