Off Course: Inside the Mad, Muddy World of Obstacle Course Racing

“Beresini uncovers the growing sport’s most compelling characters and provides the most authoritative insiders’ guide to date.” —Outside

“Obstacle course racing has taken the endurance world by storm, and in Off Course Erin Beresini gives us an insider perspective into the conflict and appeal of these masochistic suffer-fests, culminating in her quest to complete the granddaddy of them all, the Spartan Ultra Beast. A must-read for anyone currently competing in, or considering taking on, one of these newfangled racing events.” —Dean Karnazes, best-selling author of Ultramarathon Man

Everyone has seen the pictures on their social media feeds: friends or family wearing mud-spattered athletic gear, holding a medal to proclaim they’ve crossed the finish line of an intensely grueling race. Indeed, obstacle course racing is the fastest growing sport in U.S. history. Every week, thousands of athletes shell out money to run through mud and fire, crawl under barbed wire, scramble over ten-foot walls, and dodge baton-wielding gladiators.

Erin Beresini’s Off Course chronicles the author’s period of training and competition in obstacle course racing. As she investigates the world behind this military-inspired amateur competition and the industry surrounding it, Beresini meets the diverse characters who compete in these races and uncovers the sport’s biggest scandals, lawsuits, and rivalries. And through her own race training, Erin illuminates the history, science, and psychology of this sport that is taking the endurance world by storm.

“[Beresini’s] narrative has humor and heart, and a carnival of characters . . . By the end of her riotous narrative, I had to wipe mud from my glasses at least twenty-six times.”—Gary M. Pomerantz, author of Their Life’s Work: The Brotherhood of the 1970s Pittsburgh Steelers, Then and Now

About the author
Erin Beresini

ERIN BERESINI's sports journalism has appeared in the New York Times, Outside, Triathlete, Inside Triathlon, and espnW. She is the former senior editor of Competitor Magazine. She is a world champion triathlete.

I’m face-down in the mud. Sharp rocks are poking into my forearms, stomach, and thighs. I’m pretty sure I just lost a big tuft of hair to the barbed wire zigzagged inches above my head, and I don’t want to move because a sadistic man with an enormous hose will blast me again with arctic water if he thinks I’m advancing too fast. “You don’t roll in the Marines! You’ll get shot!” somebody barked at me moments ago. Then came the first icy spray.

Stay dry. That’s the only way I’ll survive out here in the cool autumn forest. Get wet, and hypothermia could set in fast. I’m already shivering, but I’m not soaked.

I’ve got at least thirty more feet of barbed wire to pass under before I can stand again, so right now I have a decision to make: roll forward and plunge into a chilly puddle, or crawl sideways where the ground is more mud than water and risk entering prime hose-blast range.

Those are not your standard Saturday morning choices. Oatmeal or pancakes? To get up or not to get up? That’s more like it. What I would do for a down comforter and a Tetley tea right now.

“Keep going!” someone inching up behind me says. Less than one hour and three miles after this torture began, it looks like we’re both about to get drenched. Even worse, we have twenty-four miles to go, and this suffering is nothing compared to what’s coming next.

I was a broken athlete. Physically, mentally, and spiritually, I had nothing left. I’d spent eight months in a melancholy funk, wondering when and how I would get my health and motivation back. And like most spectacular breakdowns, this one had been a long time coming.

I had raced my first triathlon in Tucson in 2005, and I sucked at it. The run was only three miles long but felt like thirty, and it nearly triggered a finish-line upchuck. But the mediocrity I displayed that day sparked something inside of me. I looked at my magnificently fit competitors whose muscles bulged through their spandex and decided I wanted to be like them. Not just like them — I wanted to beat them. I knew I could do better if I tried. And since I was about to graduate from college with a degree in French, I didn’t have a lot to look forward to career-wise.

After graduation, I moved to Los Angeles with visions of becoming a screenwriter — or maybe an advertising copywriter — and I started racing more triathlons. I learned to accept spandex as a valid category of apparel and found out the hard way why bike shorts are meant to be worn without underwear. I spent a lot of time at my local triathlon shop questioning the sales guy, Robert, about time trial bikes, aero bars, and neon foods that are neither liquid nor solid.

Perhaps to get me out of his hair, Robert took it upon himself to introduce me to other people, usually at the most inopportune times. Like at an Olympic distance triathlon in Ventura. I had just completed the race and was covered in my own sweat and snot. I still didn’t feel comfortable wearing spandex in public — it did nothing to enhance my figure, which was somewhat swollen from the stress of adulthood. Salt rings had formed in strange places on my tank top and shorts, emphasizing my jiggly bits. I was about to change clothes when Robert walked up to me with an incredibly hot male triathlete by his side.

“Erin!” Robert said. “I want you to meet someone.”

Oh God. I struck an awkward pose in an attempt to simultaneously cover up my tummy chub and elongate my legs.

“Jimmy, this is Erin. She also got second in your age group.”

That was it. That was all Robert had to say. Then he just stood there like he’d lit a bottle rocket and was waiting for the fuse to burn down.

When my car broke down a month later, I asked Jimmy for a ride to a race we were both doing in Flagstaff, Arizona. On the drive home, I called my mom to tell her I was going to marry Jimmy. He was fun, fit, fast, kind, and a little weird, and I loved him. He proposed seven months later.

Since Robert was clearly gifted at setting me up with like-minded people, even if his timing was a little off, I was excited when he introduced me to a group of athletes who were training to race Ironman Arizona. I didn’t know what an Ironman was, but I wanted in. I’d spent about half a year in Los Angeles and still couldn’t call myself anything other than an hourly-wage product description writer who worked in a freezing cold warehouse and lived off of the old, hard gumballs I’d found in a box under my desk. I desperately wanted to call myself an Ironman and give my parents something to brag about to their friends. Oh, your Jennifer went to Harvard Law and is now a partner at a prestigious New York law firm? Well, my daughter is an Ironman.

So, in April 2007, after twelve hours and one minute of swimming, biking, and running, I became an Ironman. I was elated to cross the finish line, but then I started wondering how much better I could do if I tried harder. And so began the cycle of training for and racing in endurance events, each a little bigger and a little badder than the next. Training became a way of life — and the way I continued to meet new friends as an adult.

When I went back to school to get a degree in the more useful but vaguely named field of “communications,” I joined the university’s triathlon team. Instant friends. While I interned after graduating, I competed in another Ironman and a 100-mile mountain bike race. Instant respect. By the time I landed my dream job at a San Diego fitness rag, there was only one thing left to do: Ultraman, a three-day, 320-mile triathlon.

“You do realize it’ll probably take you months to recover from this,” Jimmy warned when I called to tell him that I was going to sign up for Ultraman Canada. Jimmy was still working in Los Angeles, and we were living apart on weekdays. Ultraman training would help fill the void created by Jimmy’s absence and prevent me from replacing him with chocolate cake. It would also be my revenge on Race Across Oregon, a 516-mile cycling race that was the only event I’d ever quit.

It happened in July 2009. I had been riding my bike 376 miles straight into a headwind when something in my brain broke.

Why the hell are you doing this? a unicorn walking alongside of me asked.

I don’t know, I replied. Why are you talking to me?

Offended, my hallucination trotted into the trees while I climbed into the minivan with my crew for a break and never got back out. I’d felt guilty about quitting ever since. Ultraman would fix that.

The endurance gods smiled upon me during training, and I never once got injured. I did get pulled off of the Los Angeles Marathon course...

“Beresini uncovers the growing sport's most compelling characters and provides the most authoritative insiders' guide to date.” --Outside Magazine

"Beresini chronicles her personal journey as she prepares for her race, detailing the regimen and questioning, in an engaging, self-deprecating style, what such a sadistic undertaking says about the participants’ sanity. A fascinating insider’s view of endurance racing’s latest craze." --Booklist

"Obstacle course racing has taken the endurance world by storm and in OFF COURSE Erin Beresini gives us an insider perspective into the conflict and appeal of these masochistic suffer-fests, culminating in her quest to complete the granddaddy of them all, the Spartan Ultra Beast. A must read for anyone currently competing in, or considering taking on, one of these newfangled racing events." --Dean Karnazes, bestselling author of Ultramarathon Man and 50/50

"Erin Beresini has gone gonzo. In OFF COURSE, she puts herself to the ultimate test in an obstacle racer’s world of alphas and ultras, and Tough Mudders. Her narrative has humor and heart, and a carnival of characters. Her sharp reporting puts the reader there. By the end of her riotous narrative, I had to wipe mud from my glasses at least twenty-six times." --Gary M. Pomerantz, author of Their Life’s Work: The Brotherhood of the 1970’s Pittsburgh Steelers, Then and Now 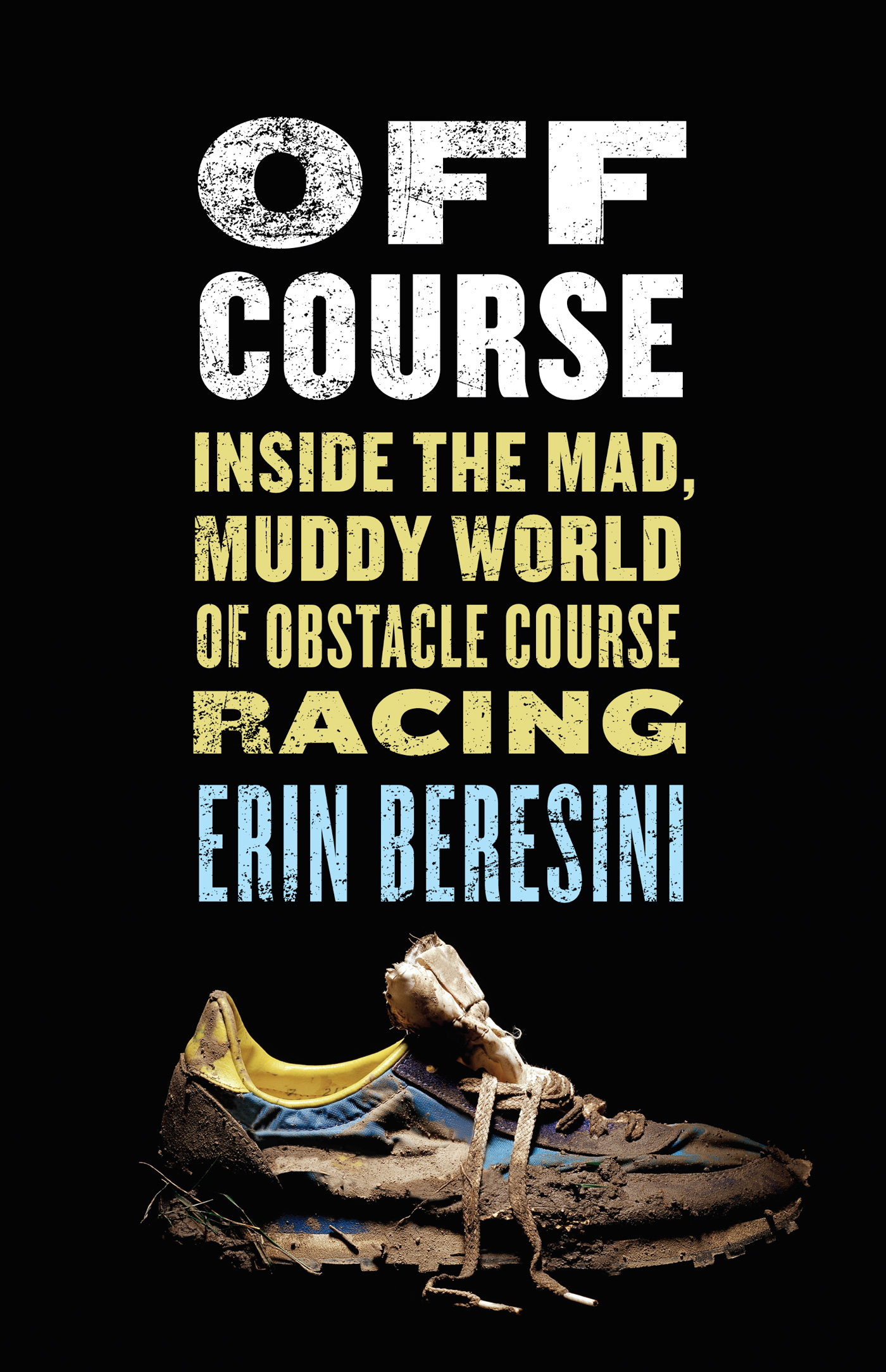