From the best-selling author of The Name of the Rose and The Prague Cemetery, a novel about the murky world of media politics, conspiracy, and murder

“One of the most influential thinkers of our time.” — Los Angeles Times

1945, Lake Como. Mussolini and his mistress are captured and shot by local partisans. The precise circumstances of Il Duce’s death remain controversial.

1992, Milan. Colonna, a depressed hack writer, is offered a fee he can’t resist to ghostwrite a book. His subject: a fledgling newspaper, which happens to be financed by a powerful media magnate. As Colonna gets to know the team, he learns of the editor’s paranoid theory that Mussolini’s corpse was a body double and part of a wider Fascist plot. It’s the scoop the newspaper desperately needs. The evidence? He’s working on it.

It’s all there: media hoaxes, Mafiosi, the CIA, the Pentagon, blackmail, love, gossip, and murder. A clash of forces that have shaped Italy since World War II — from Mussolini to Berlusconi. “Farcical, serious, satiric, and tragic” (Le Point, France), Numero Zero is the work of a master storyteller.

UMBERTO ECO (1932–2016) was the author of numerous essay collections and seven novels, including The Name of the Rose,The Prague Cemetery, and Inventing the Enemy. He received Italy’s highest literary award, the Premio Strega, was named a Chevalier de la Légion d’Honneur by the French government, and was an honorary member of the American Academy of Arts and Letters

About the author
Umberto Eco

UMBERTO ECO (1932–2016) was the author of numerous essay collections and seven novels, including The Name of the Rose,The Prague Cemetery, and Inventing the Enemy. He received Italy's highest literary award, the Premio Strega, was named a Chevalier de la Légion d'Honneur by the French government, and was an honorary member of the American Academy of Arts and Letters.

No water in the tap this morning.

Gurgle, gurgle, two sounds like a baby’s burp, then nothing.

I knocked next door: everything was fine there. You must have closed the valve, she said. Me? I don’t even know where it is. Haven’t been here long, you know, don’t get home till late. Good heavens! But don’t you turn off the water and gas when you’re away for a week? Me, no. That’s pretty careless. Let me come in, I’ll show you.

She opened the cupboard beneath the sink, moved something, and the water was on. See? You’d turned it off. Sorry, I wasn’t thinking. Ah, you singles! Exit neighbor: now even she talks English.

Keep calm. There are no such things as poltergeists, only in films. And I’m no sleepwalker, but even if I had sleepwalked, I wouldn’t have known anything about the valve or I’d have closed it when I couldn’t sleep, because the shower leaks and I’m always liable to spend the night wide-eyed listening to the dripping, like Chopin at Valldemossa. In fact, I often wake up, get out of bed, and shut the bathroom door so I don’t hear that goddamn drip.

It couldn’t have been an electrical contact, could it (it’s a hand valve, it can only be worked by hand), or a mouse, which, even if there was a mouse, would hardly have had the strength to move such a contraption. It’s an old-fashioned tap (everything in this apartment dates back at least fifty years) and rusty besides. So it needed a hand. Humanoid. And I don’t have a chimney down which the Ourang-Outang of Rue Morgue could have climbed.

Let’s think. Every effect has its cause, or so they say. We can rule out a miracle ?— ?I can’t see why God would worry about my shower, it’s hardly the Red Sea. So, a natural effect, a natural cause. Last night before going to bed, I took a sleeping pill with a glass of water. Obviously the water was still running then. This morning it wasn’t. So, my dear Watson, the valve had been closed during the night ?— ?and not by you. Someone was in my house, and he, they, were afraid I might have been disturbed, not by the noise they were making (they were silent as the grave) but by the drip, which might have irritated even them, and perhaps they wondered why I didn’t stir. And, very craftily, they did what my neighbor would have done: they turned off the water.

And then? My books are in their usual disarray, half the world’s secret services could have gone through them page by page without my noticing. No point looking in the drawers and opening the cupboard in the corridor. If they wanted to make a discovery, there’s only one thing to do these days: rummage through the computer. Perhaps they’d copied everything so as not to waste time and gone back home. And only now, opening and reopening each document, they’d have realized there was nothing in the computer that could possibly interest them.

What were they hoping to find? It’s obvious ?— ?I mean, I can’t see any other explanation ?— ?they were looking for something to do with the newspaper. They’re not stupid, they’d have assumed I must have made notes about all the work we are doing in the newsroom ?— ?and therefore that, if I knew anything about the Braggadocio business, I’d have written it down somewhere. Now they’ll have worked out the truth, that I keep everything on a diskette. Last night, of course, they’d also have been to the office and found no diskette of mine. So they’ll be coming to the conclusion (but only now) that I keep it in my pocket. What idiots we are, they’ll be saying, we should have checked his jacket. Idiots? Shits. If they were smart, they wouldn’t have ended up doing such a scummy job.

Now they’ll have another go, at least until they arrive at the stolen letter. They’ll arrange for me to be jostled in the street by fake pickpockets. So I’d better get moving before they try again. I’ll send the diskette to a poste restante address and decide later when to pick it up. What on earth am I thinking of, one man is already dead, and Simei has flown the nest. They don’t even need to know if I know, and what I know. They’ll get rid of me just to be on the safe side, and that’s the end of it. I can hardly go around telling the newspapers I knew nothing about the whole business, since just by saying it I’d make it clear I knew what had happened.

How did I end up in this mess? I think it’s all the fault of Professor Di Samis and the fact that I know German.

What makes me think of Di Samis, a business of decades ago? I’ve always blamed Di Samis for my failure to graduate, and it’s all because I never graduated that I ended up in this mess. And then Anna left me after two years of marriage because she’d come to realize, in her words, that I was a compulsive loser ?— ?God knows what I must have told her at the time to make myself look good.

I never graduated due to the fact that I know German. My grandmother came from South Tyrol and made me speak it when I was young. Right from my first year at university I’d taken to translating books from German to pay for my studies. Just knowing German was a profession at the time. You could read and translate books that others didn’t understand (books regarded as important then), and you were paid better than translators from French and even from English. Today I think the same is true of those who know Chinese or Russian. In any event, either you translate or you graduate; you can’t do both. Translation means staying at home, in the warmth or the cold, working in your slippers and learning tons of things in the process. So why go to university lectures?

I decided on a whim to register for a German course. I wouldn’t have to study much, I thought, since I already knew it all. The luminary at that time was Professor Di Samis, who had created what the students called his eagle’s nest in a dilapidated Baroque palace where you climbed a grand staircase to reach a large atrium. On one side was Di Samis’s establishment, on the other the aula magna, as the professor pompously called it, a lecture hall with fifty or so seats.

You could enter his establishment only if you put on felt slippers. At the entrance there were enough for the assistants and two or three students. Those without slippers had to wait their turn outside. Everything was polished to a high gloss, even, I think, the books on the walls. And even the faces of the elderly assistants who had been waiting their chance for a teaching position from time immemorial.

The lecture hall had a lofty vaulted ceiling and Gothic windows (I never understood why, in a Baroque palace) with green stained glass. At the correct time, which is to say at fourteen minutes past the hour, Professor Di Samis emerged from the institute, followed at a distance of one meter by his oldest assistant and at two meters by the younger ones, those under fifty. The oldest assistant carried his books, the younger ones the tape recorder ?— ?tape recorders at that time were still eno...

One of Vulture's "7 Books You Need to Read this November"

One of Bloomberg Business's "Eight Books for Your Holiday Reading"

“Witty and wry...slim in pages but plump in satire about modern Italy...it’s hard not to be charmed by the zest of the author.”—Tom Rachman, New York Times Book Review

"Frequently imitated for his amalgamation of intellect, conspiracism, and historical suspense, the author of In the Name of the Rose takes a more contemporary and satirical turn. In 1992, as Italy works to cleanse itself of corruption, a hack journalist is hired to ghostwrite a memoir about a never-to-be-published gossip rag in order to cover up the real rationale for its fakery. Eco’s warped parable is rooted in a very specific time and place, but readers of Elena Ferrante or Rachel Kushner will likely catch the barbs in his clever absurdities."—Vulture (New York), "7 Books You Need to Read this November"

"Colonna, the struggling ghostwriter at the heart of this story, is transfixed by a juicy scoop: that Mussolini was not killed by partisans in 1945, as most believe, but instead survived in hiding. This sly satire, borrowing from outrageous real-life Italian politics, features a larger-than-life leader, conspiracy theories and an almost-corrupt press."—New York Times, Paperback Row 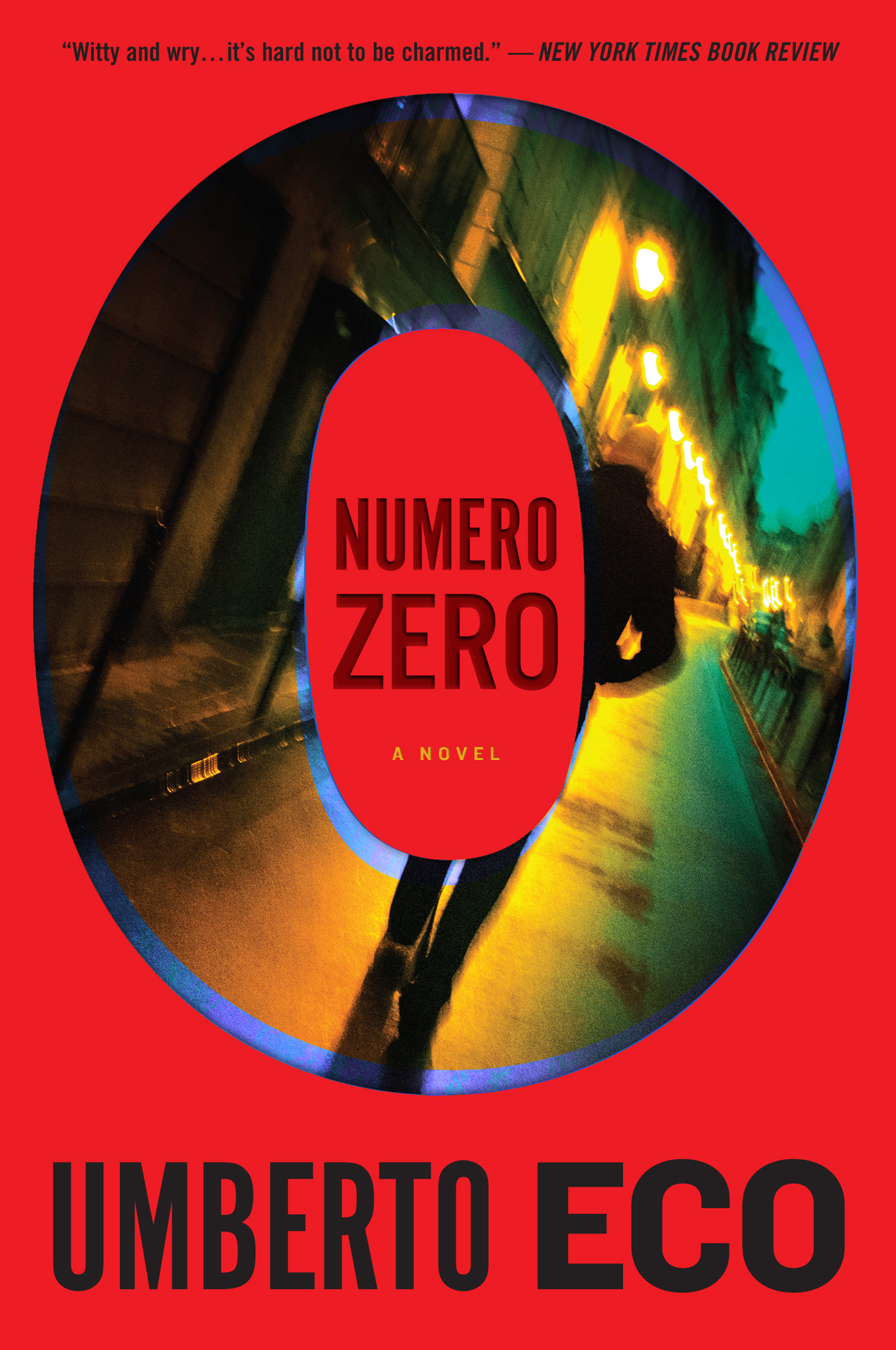