In this winner of the Crime Writers' Association John Creasey Dagger Award and the Guardian Best Crime and Thriller of the Year, a former Marine sniper and a newly orphaned boy race across the Norwegian wilderness, fleeing demons both real and imagined.

In this winner of the Crime Writerss Association John Creasey Dagger Award and the Guardian Best Crime and Thriller of the Year, a former Marine sniper and a newly orphaned boy race across the Norwegian wilderness, fleeing demons both real and imagined.

Sheldon Horowitz??—??widowed, impatient, impertinent??—??has grudgingly agreed to leave New York and move in with his granddaughter, Rhea, and her new husband, Lars, in Norway??—??a country of blue and ice with one thousand Jews, not one of them a former Marine sniper in the Korean War turned watch repairman. Not until now, anyway.

Home alone one morning, Sheldon witnesses a dispute between the woman who lives upstairs and an aggressive stranger. When events turn dire, Sheldon seizes and shields the neighbor’s young son from the violence, and they flee the scene. As Sheldon and the boy look for a safe haven in an alien world, past and present weave together, forcing them ever forward to a wrenching moment of truth.

A Financial Times Best Book of the Year, Kirkus Reviews Best Crime Novel of the Year, and an Indie Next Selection. You can find the coming-of-age story of Sheldon Horowitz in How To Find Your Way in the Dark. Additionally, this is the first novel in which Sigrid Ødegård appears. You can follow her to her next case in American by Day.

About the author
Derek B. Miller

DEREK B. MILLER has worked on international peace and security for think tanks, diplomatic missions, and the United Nations. His first novel, Norwegian by Night, was an Indies Choice Honor Book, an Economist "Best Book of 2013," and a winner of the CWA's John Creasey Dagger Award. His second novel, The Girl in Green, was published in 2017. Born and raised in Boston, Miller has lived abroad for more than fifteen years, in Norway, Switzerland, Britain, Israel, and Hungary. He now lives in Oslo, Norway, with his wife and two children.

"Has the brains of a literary novel and the body of a thriller."

"Derek B. Miller’s Norwegian by Night is one of those books that completely transcends its genre and offers us one of the most memorable characters — Sheldon Horowitz — that I’ve encountered in years.  If you like those other Scandihoovian thriller writers, this is your book."

—Richard Russo for The Millions

"Truly a page-turner...Norwegian by Night is about past wars and present-day ethnic strife, family, grief, guilt and, ultimately, redemption. Korea (and phantom Koreans), Vietnam, the Holocaust, ethnic identity — Serb, Norwegian, Muslim, and yes, Jewish — these are the true characters of the novel....Funny, moving and thoroughly gripping."

"A stunning examination of how our lives shape our character, and how our allegiances shape our destiny."

"Derek B. Miller's debut novel, Norwegian by Night, is about aging snipers. Or, it's about parenting and loss. Or, the lingering traces of the Korean and Vietnam Wars. It feels about as full as life itself, and almost as real."

"[A] beautifully-written contribution to Nordic noir with a twist. It cleverly avoids many the genre’s clichés and pitfalls and emerges triumphant as a fully-dimensional gem."

"Both an exciting chase thriller and a poignant story about a man who comes into his own again in his dotage."

"No brief plot outline can do justice to a book that deserves to find a place on a few best-of-the-year lists. Sheldon is a brilliantly imagined character, a true mensch, made of Greatest Generation stuff...Miller joins the ranks of Stieg Larsson, Henning Mankell, and Jo Nesbø, the holy trinity of Scandinavian crime novelists."

"Miller's affecting debut, about a cantankerous Jewish widower transplanted to Norway who becomes party to a hate crime, is an unusual hybrid: part memory novel, part police procedural, part sociopolitical tract and part existential meditation. Miller, an American living in Oslo...makes the setting a powerful character...The novel, first published in Norway, was worth the wait."

"A literate, thoughtful and unusual thriller...Our image of Scandinavia is one of tolerance — Miller doesn’t disagree with the image, but Norwegian by Night offers a fascinating fictional exploration of the meaning and implementation of that tolerance."

"Norwegian by Night has all the ingredients of a top-notch thriller, but it's the superb characterisation of the protagonist that fuels true suspense. Funny and moving as well as thoroughly gripping, this is crime fiction of the highest order." --The Guardian

"Much more than an enjoyable thriller. It is a beautifully written tale of love and loss...One of the best novels of the year."—Jenni Frazer, The Jewish Chronicle (UK)

"This highly visual storytelling reads like a first draft of the script for an action-packed, emotionally satisfying movie, one that will appeal to both sexes." —Jewish Book Council

Norwegian by Night'sn ot just a great title, it's also a soulful, humane, and sparklingly funny novel. Spend some time with Sheldon and company in the Scandinavian wilderness and you just might make peace with your god, your ghosts, and yourself. -- Gary Shteyngart, author of Super Sad True Love Story

"NORWEGIAN BY NIGHT is an outrageously intelligent thriller, and its philosopher-sniper hero, Sheldon Horowitz, is a character who'll stay in your brain for decades. You might come for the guns and the ruckus, but by the last page, with your heart still pounding, you'll be crying at all the goddamned beauty and love in the world." - Patrick Somerville, author of This Bright River  and The Cradle

"Norwegian by Night shifts along like an inquisitive wind, with characters who enter your mind so easily it’s as if they’ve been there all along, and a voice so confident you would follow it into a leaning house. Generous with its wit, dazzling in its cultural and historical reach, Derek Miller’s novel is the kind of sweep-you-up tale a reader always wants but rarely finds, the kind where you stand in the bookstore reading the opening pages and whisper, This is the one."—Leif Enger, bestselling author of Peace Like a River

"Have you ever lucked into one of those novels so taut and suspenseful that you can't turn the pages fast enough, yet, at the same time, so magnificently written and psychologically incisive that you find yourself unable to turn those same pages slowly enough? Such novels are as rare as great comets. Norwegian by Night, I'm happy to report, is one. Make sure you're in a comfortable spot when cracking this book; you won't be putting it down for an obscenely long while."—Jonathan Miles, author of Dear American Airlines

"Humane, blackly funny, heartbreaking, full of believable people and with a touching, magnificent hero in Sheldon, this is one of the best books I’ve read this year. Verdict: Brilliant."—Herald Sun (Australia)

"Norwegian By Night [is] ostensibly a Scandinavian thriller yet recalls Saul Bellow and Philip Roth’s more cerebral creations…A remarkably confident debut that is at once a rich psychological study, a political ­parable that seems to be about America’s compulsion to intervene abroad, and a moving story of an old man’s last chance to slay his demons."—John Dydale, The Sunday Times (UK)

"A stunningly good debut thriller, subtle and moving, with a truly original hero…Literate, elegant and compelling."—Marcel Berlins, The Times (UK)

"From the synopsis, it is impossible to harness all the themes and subtlety of prose that this book conveys to the reader. On one level, not only does the book contain all the quintessential elements of a Scandinavian crime novel, it also encompasses the Korean, Vietnam, and Balkan conflicts, and on a more emotional level, presents a poignant and meditative examination of aging and regret…I would urge everyone to read this exceptional debut, with its powerful and emotive themes…[as well as] all the tension of a totally authentic Scandinavian crime thriller. I cannot praise it highly enough, and Norwegian By Night could well be one of my top crime reads of the year. Outstanding." 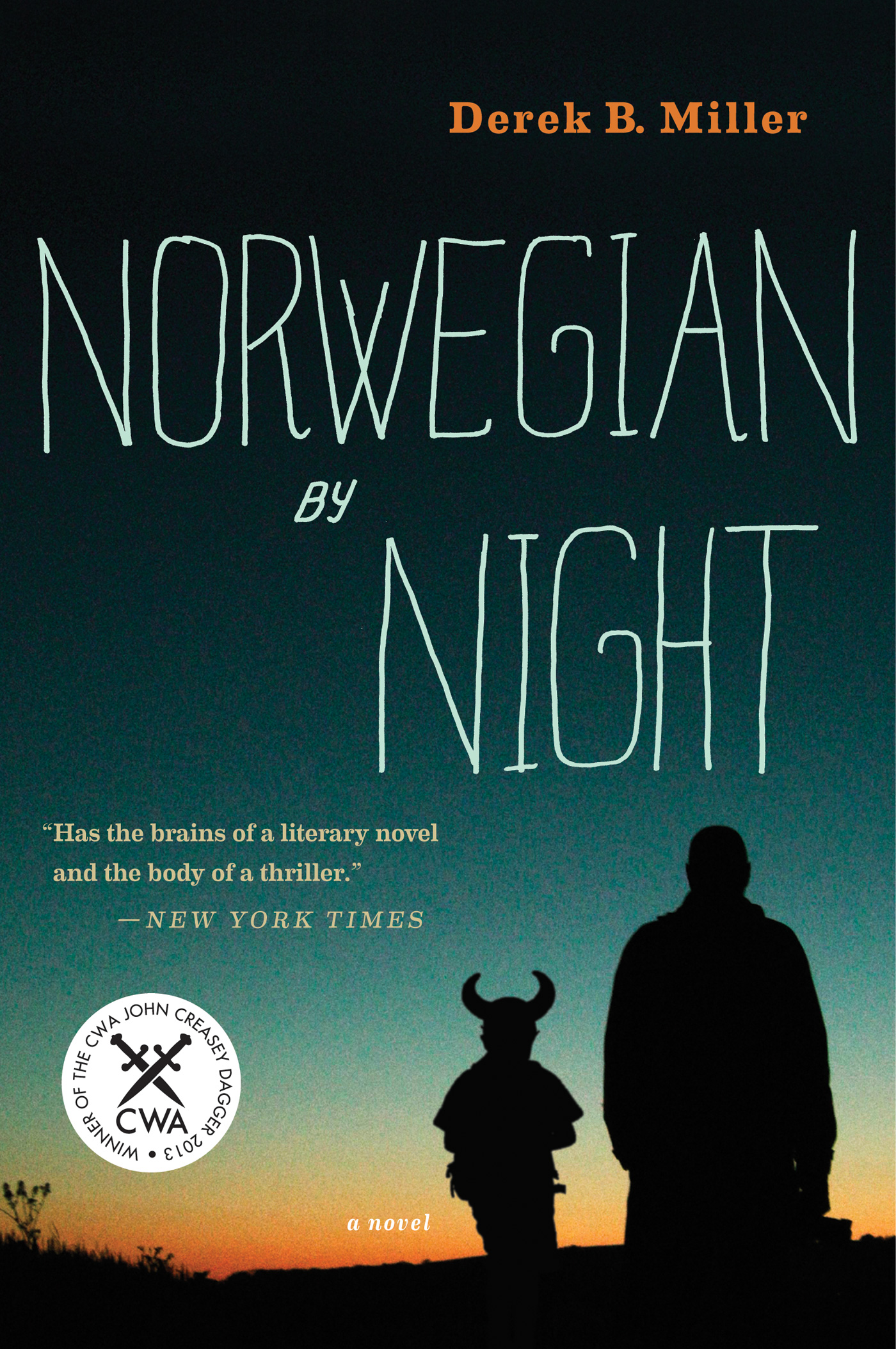