Noah Webster: Man of Many Words

An upper-middle-grade biography on Noah Webster, a controversial political activist, the primary shaper of the American language, and author of the famous dictionary that bears his name. Illustrated with archival images.

Noah Webster may be best remembered for the enormous and ambitious task of writing his famous dictionary, but for him, this accomplishment was a means to an end. His true goal was to streamline the language spoken in our newly formed country so that it could be used as a force to bring people together and be a source of national pride. Though people laughed at his ideas, Webster never doubted himself. In the end, his so-called foolish notions achieved just what he had hoped.

Here, in the only account of Noah Webster for teens, the seasoned biographer Catherine Reef guides us through Webster's remarkable life, from boyhood on a Connecticut farm through the fight for American independence to his days as a writer and political activist who greatly influenced our Founding Fathers and the direction of the young United States.

About the author
Catherine Reef

Catherine Reef is the author of more than 40 nonfiction books, including many highly acclaimed biographies for young people. She lives in College Park, Maryland. www.catherinereef.com.

A Boy Who Dreamed of Books and Words

The letter A is one kind of beginning; birth is another. Noah Webster, Jr., was born in the West Division of Hartford, Connecticut, in his family’s farmhouse, on October 16, 1758. Like his brothers and sisters, Noah was born in the best room, the one that served as a parlor during the day and his parents’ bedchamber at night. This room was furnished simply, with straight-backed chairs and a four-poster bed. A massive stone fireplace offered heat, and a black Bible sat on the writing desk, ready to be consulted. The Websters sought its guidance for even the simplest duties of daily life.

Noah’s mother, Mercy Steele Webster, had a great-great-grandfather who sailed to Plymouth Colony on the Mayflower in search of religious freedom. Like all farm women, Mercy Webster worked hard, making cloth, sewing and mending clothes, cooking and preserving food, gardening, and sweeping out the house. Somehow she had time to school the children in spelling and arithmetic. She read to them and taught them to play the flute. Beauty touched her soul, and she cried easily if she happened on a heartfelt phrase in a book or heard a well-loved melody. She passed along her loves to Noah. As a young man, he would turn to his books and flute whenever he felt low. In his diary he marveled that “the sound of a little hollow tube of wood should dispel in a few moments, or at least alleviate, the heaviest cares of life!”

Mercy Webster led the family in singing psalms every night. As good colonial parents, the Websters made their home a godly setting, to start the children on the path to salvation. Mercy’s husband, Noah Webster, Sr., had little formal schooling, but he was a bright man whose mind was open to new ideas. He was a founder of the local First Book Society, an early version of a public library. He served as a church deacon and justice of the peace.

Hartford in the 1750s was one of Connecticut’s two capitals; New Haven was the other. Hartford was a growing town, where twenty or more shops lined the main street, selling everything from sugar, tea, and flour to gunpowder, nails, and axes. Some merchants were so eager for profits that they built shops on top of Hartford’s old burial ground, which had been set aside as a graveyard in 1640. Others moved their businesses closer and closer to the road. In 1758, the year Noah was born, Hartford’s leaders halted this inching forward by ordering property owners in the center of town to put in brick sidewalks.

Nearly all of the town’s thirty-nine hundred people had English roots. About a hundred were African Americans, most of them enslaved. Slavery was legal throughout the colonies, although large-scale slaveholding never took hold in New England as it did in the South. A prosperous Connecticut family might own a slave or two, or possibly three.

In 1636, English settlers purchased the land that became the West Division from the Saukiog Indians. Generations of Saukiog had lived beside the Connecticut River, which teemed with fish. They hunted game and gathered nuts and berries in nearby forests and meadows. The Saukiog continued to live close to the West Division after the English came, because having armed settlers nearby offered protection from their enemies, the Pequot and Mohegan tribes.

In this setting, young Noah grew into a lanky boy. His gray eyes were flecked with brown, and his red hair never would behave. As soon as he was big enough, he joined his father and older brother, Abraham, in the fields. The boys pushed a plow and sowed seeds in spring, pulled weeds throughout the summer, and gathered the ready crops come fall. All children worked hard on a colonial farm, boys and girls alike. Noah’s sisters, Mercy and Jerusha, churned butter, gathered eggs, and spun linen and wool. They also looked after the youngest child, Charles, who was born in 1762. At night the children slept on straw mattresses, the boys in one of two upstairs rooms and the girls in the other.

Between the fall harvest and spring planting, the children attended the South Middle School. In colonial Connecticut, towns of seventy or more households were required to provide a school for half the year. Most of these “common schools” were small buildings where children of all ages sat together on backless benches. Pupils had few supplies or textbooks. Some families owned The New-England Primer, which was first published around 1690. This reader offered simple verses on religious themes for children to read and learn by heart.

Another book, A New Guide to the English Tongue, by the British author Thomas Dilworth, came into use in the 1740s. Dilworth’s book began with the alphabet and moved on to tables of two-letter syllables for pupils to memorize: “ba be bi bo bu.” Next came words of two and three letters, followed by simple religious readings:

No Man may put off the Law of God.

Teaching religion in school was just as important as teaching reading, colonial leaders believed. Children needed faith to protect them from “that ould deluder, Satan.”

Women taught in some small-town schools, but most colonial teachers were men. Schoolmasters needed no training, so just about any man could keep school. Some schoolmasters had college degrees, but many were drifters, drunkards, or indentured servants who had agreed to teach for a period of years if the community paid their passage from England. Towns wanting to get the most for their money often expected the teacher to serve in other ways, perhaps by leading the choir, cleaning the church, or digging graves. Keeping school was a tedious, low-paying job, so teachers tended to drift away as easily as they came. Indentured schoolmasters were known to run off to avoid serving their full term of service. In 1777, one Connecticut town offered a reward for the return of its schoolmaster, a man “of a pale complexion, with short hair” who had “the itch very bad, and sore legs.”

For Noah Webster, school meant boredom. During the months when school was in session, he spent five or six hours each day “in idleness, in cutting tables and benches in pieces,” he said, “or perhaps in some roguish tricks.”

Noah learned no history in school, although he was growing up in a momentous time. In 1754, four years before he was born, Great Britain and France went to war in North America to decide which nation would control the continent and its profitable fur trade. At the time the war broke out, nearly all land east of the Mississippi River had been claimed by Britain or France. The French had settled along the St. Lawrence and Mississippi Rivers and in some of the northern territory that would become Canada. They were greatly outnumbered by the English, whose colonies ran along the East Coast, between the Atlantic Ocean and the Appalachian Mountains. As English settlers began to push west, the French built forts, hoping to stop them. Borders were vague, though, and each of the two powers claimed the Ohio River valley as its own.

Native people battled on both sides of this conflict, which is known as the French and Indian War. Colonial militiamen fought for the British, and among them was Noah’s father. Leaving his wife to run the farm, he helped def...

* "Featuring a large font and images throughout, this attractive offering is an excellent look at a noteworthy individual. A first-rate addition to biography and history collections."

"Historical background gives context to this cradle-to-grave biography, and en epilogue discusses how our language continues to change." 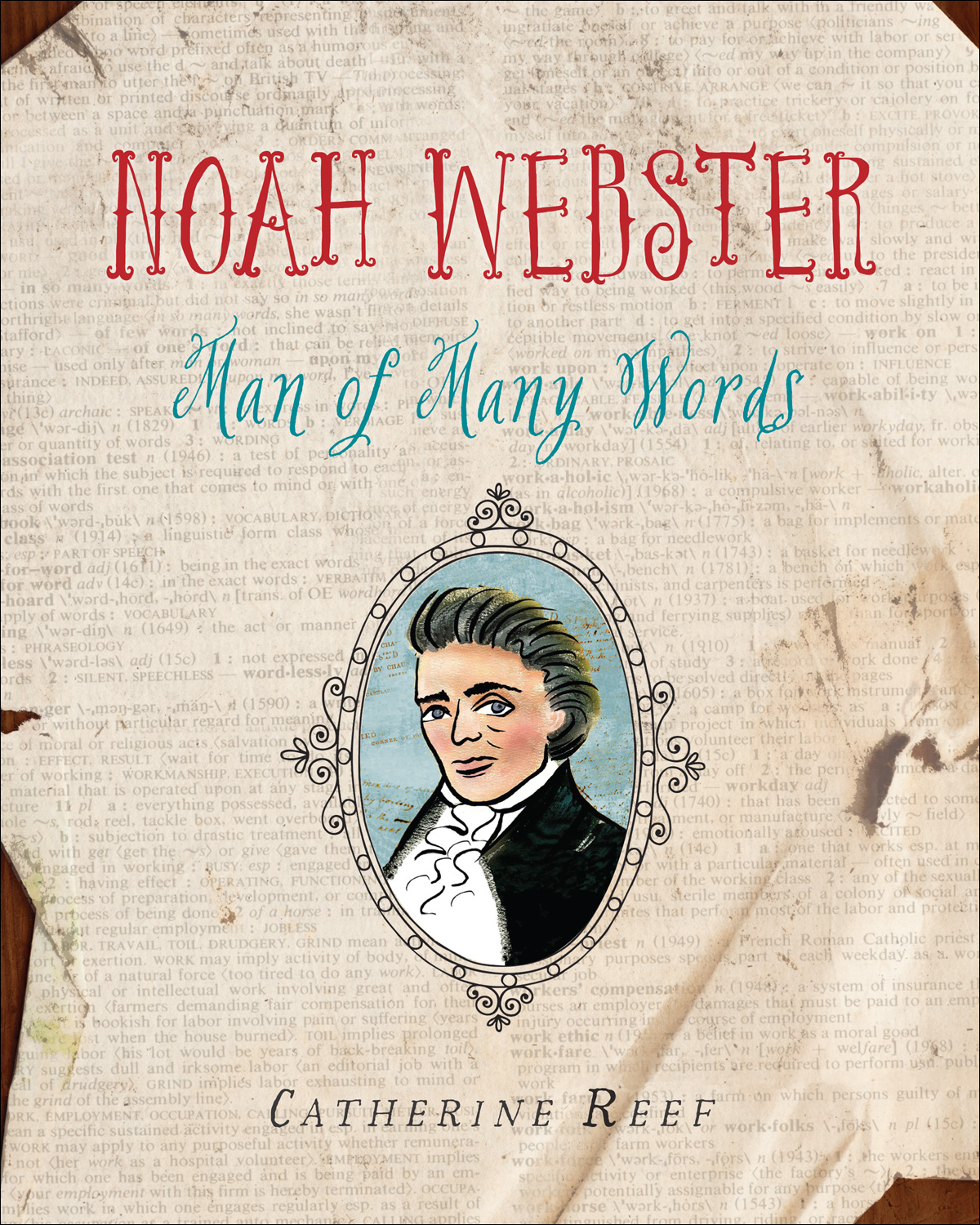