A contemporary gothic from an author in the company of Kelly Link and Aimee Bender, Mr. Splitfoot tracks two women—Ruth (a scam-artist foster kid), and, decades later, Cora (her pregnant niece)—as they march, each in her own time, toward a mysterious reckoning.

“An intriguing mystery with clues, suspense, enigmas galore, and an exhilarating, witty, poignant paean to the unexplainable, the unsolvable, the irreducibly mysterious.”

Ruth and Nat are seventeen. They are orphans. And they may be able to talk to the dead. Enter Mr. Bell, a con man with his own mystical interests. Together they embark on an unexpected journey that connects meteor sites, utopian communities, lost mothers, and a scar that maps its way across Ruth’s face.

Decades later and after years of absence, Ruth visits her niece, Cora. But while Ruth used to speak to the dead, she now won’t speak at all. She leads Cora on a mysterious mission that involves crossing the entire state of New York on foot. Where is she taking them? And who—or what—is hidden in the woods at the end of the road?

“An escapist adventure, a gothic page-turner that is also so finely crafted that you’ll feel enriched as well as transported for having read it.” — Esquire

About the author
Samantha Hunt

Samantha Hunt's novel about Nikola Tesla, The Invention of Everything Else was a finalist for the Orange Prize and winner of the Bard Fiction Prize. Her first novel, The Seas, a twisted tale of mermaids, won the National Book Foundation's Five under Thirty-five prize. She lives in upstate New York.

But Nat’s a preacher in a fever. His lesson continues with a new topic. “Baby deer have no scent when they are born.” Nat conducts the air. “Keeps those babies safe as long as their stinking mothers stay far away.” This is how Nat loves Ruth. He fills her head with his wisdom.

“Of course I do. She’s a veterinarian. She already had too many animals when I was born.”

“Where’s all the cash, then? Are you hiding it in some big cardboard box?”

So Ruth swerves again, returning to the version of a mother she uses most often. “I mean my mom’s a bird, a red cardinal.”

“No, she isn’t. She’s a stone. Bones. I spit on her.” Nat steals confidence from thin air.

Ruth pulls her long dress tight across bent knees. She doesn’t even know enough about mothers to fabricate a good one. Her idea of a mother is like a non-dead person’s idea of heaven. It must be great. It must be huge. It must be better than what she’s got now. “I’m just saying, wherever she is, she doesn’t stink.”

Nat flips the feathers of his hair. “Wherever she is. Exactly.” He holds his hand in a ray of sunlight. “I’m here now.” He lifts the hand that touched light up to her ear, squeezing the lobe, an odd, familiar affection between their bodies. Nat touches the scar on her face, tangled knots of tissue, keloids dots on her nose and cheeks. “Do you know how they deliver mail to the bottom of the Grand Canyon?”

“I taught you this before. Please.” Nat is cruel or Nat is gentle. Nat hates/loves Ruth as much as he hates/loves himself. He’ll say, “Sleep on the floor tonight” or “I’m taking your blue coat. I like it” or “Stop crying right now.” But he’ll also say, “Eat this” and “You can dance, girl” and “Stay the fuck away from Ruth, or I’ll slice your ear cartilage off and give it to a dog to chew on.” When the Father raises a switch, Nat gives his back. “Are you just someone who wants to stay stupid?”

She wrinkles her nose.

“I believe you. You’re the only shop in town.”

They are alone in Love of Christ!’s bright living room. They are happiest when they are alone together. “Tell me what you know about light.”

“It’s the fastest thing in the world.”

Dust turns before her eyes. “OK. I believe you.”

Nat looks right at her, smiles. “What killed Uncle Sam?”

She imagines a forgotten relative, an inheritance, a home. “Who’s that?”

“Samuel Wilson, the meatpacking man once called Uncle Sam. Symbol of our nation? He’s buried just down the road apiece. You didn’t even know Uncle Sam was dead.”

“I didn’t know Uncle Sam was a real person. What killed him?”

His, she wonders, or mine?

Nothing is near here, upstate New York. The scope of the galaxy seems reasonable. Light, traveling ten thousand years to reach Earth, makes sense because from here even the city of Troy, three miles away, is as distant as Venus. What difference could ten thousand light years make? Nat and Ruth have never been to Manhattan.

The Love of Christ! Foster Home, Farm, and Mission is a brick bear spotted with mange. Handiwork from days past? — ?ledge and brace doors, finger-joint chair rails, and hardwood floors? — ?is being terrorized by state-provided, institutional, indestructible furniture common to dormitories and religious organizations. The house’s wooden floors are smooth as a gun butt. In summer Drosophila melanogaster breed in the compost pile. Each snaggletooth of a homestead constructed during the Civil War pleases Father Arthur, lord of the domain, founder of Love of Christ! “Hand of the creator,” he says. Clapboards that keep out only some of the wind; sills that have slipped off square; splinters as long as fingers. The house is always cold with a useless hearth since the State frowns on foster home fireplaces. “Meddlers!” Father Arthur unleashed his rage against bureaucracy, using a sledge on the innocent, elderly chimney. Now once a day when the sun reaches alignment, a sliver of light shines into the house through the busted-up flue, a precise astronomical calendar if anyone knew how to read it.

At Love of Christ! children feel the Lord, and the Lord is often furious and unpredictable, so Father Arthur cowers from corrupting influences. No Walt Disney, soda pop, or women’s slacks pass his threshold. The children milk goats, candle and collect eggs, preserve produce, and make yogurt from cultures they’ve kept alive for years. Blessed be the bacteria. The children remain ignorant of the bountiful mysteries filling the nearby Price Chopper.

Boys at Love of Christ! wear black cotton pants and solid tops from a limited palette of white, tan, or brown. The girls wear plain dresses last seen on Little House on the Prairie reruns. Simple fabric, a few pale flowers, a modest length for working. Fingernails are clean and rounded. Teeth are scrubbed with baking soda. The old ways survive, and seasonal orders dictate.

But? — ?like the olivine-bronzite chondrite meteor that surprised a Tomhannock Creek farmer back in 1863? — ?corruption has a way of breaking through. New charges arrive with words from the outside: mad cow disease, La-Z-Boy recliner, Barbie doll.

“You know what Myst is?” Ruth asks Nat.

“M.I.S.T. Yes. A secretive branch of the Marines. Surprised you’ve heard of it.” He works with more confidence than facts.

“I thought it was a video game.”

When they had mothers, Nat’s read him books and fed him vitamins until a bad man bit off the tip of her right breast and told her he’d be back for the left one. She didn’t stop driving unti...

“Ethereal . . . The book deftly straddles the slippery line between fantasy and reality in a story that’s both gripping and wonderfully mystifying . . . [I]nterconnected chapters build suspense while keeping readers guessing about what crazy turn might happen next. Hints of what’s in store for readers include a cult of Etherists, a noseless man, a pile of lost money, and a scar-like pattern of meteorite landings. This spellbinder is storytelling at its best.”—Publishers Weekly, starred review

“A truly fantastic novel in which the blurring of natural and supernatural creates a stirring, visceral conclusion.”—Kirkus Reviews, starred review

“I get the chills. Is it a true story? Is it a sad story? It’s what people want. It has a lot of good energy and people, people will like it. They will keep reading it until they read the end of it. It’s intriguing because a person will know there’s something two-sided. Yeah. It’s a good one.”—Charlotte Brontë, speaking through a medium

“Part road trip, part gothic, Mr. Splitfoot belongs on the shelf beside The Haunting of Hill House and We Have Always Lived in the Castle. Samantha Hunt is astonishing. Her every sentence electrifies. Her characters demand our closest attention. Her new book contains everything that I want in a novel. If I could long-distance mesmerize you, dear reader, into picking up this book and buying it and reading it at once, believe me: I would.”—Kelly Link, author of Get in Trouble,Magic for Beginners, and many others

“I’m speechless. Mr. Splitfoot is so inventive, so new; I haven’t read anything like it in years. On the surface it's about false spirituality and the most demented road trip across New York State ever attempted, but it's also about the horrible ties that bind us and the small acts of redemption that make life almost okay. On top of that, it’s a thrilling page-turner. I couldn’t stop reading it.”—Gary Shteyngart, author of Little Failure,Super Sad True Love Story, and many others

“Mr. Splitfoot is lyrical, echoing, deeply strange, with a quality of sustained hallucination. It is the best book on communicating with the dead since William Lindsay Gresham's Nightmare Alley, but it swaps out that novel’s cynicism for a more life-affirming sense of uncertainty.”—Luc Sante, author of Low Life and many others

“Mr. Splitfoot is an absolutely thrilling book. Filial and maternal love are on display in all their complicated hugeness. But Hunt gives us plenty of humor amid the horror and awe—

and then turns on the lights and shows us what was looming above us the whole time. I can’t stop thinking about it.”—Sarah Manguso, author of Ongoingness, Two Kinds of Decay, and others 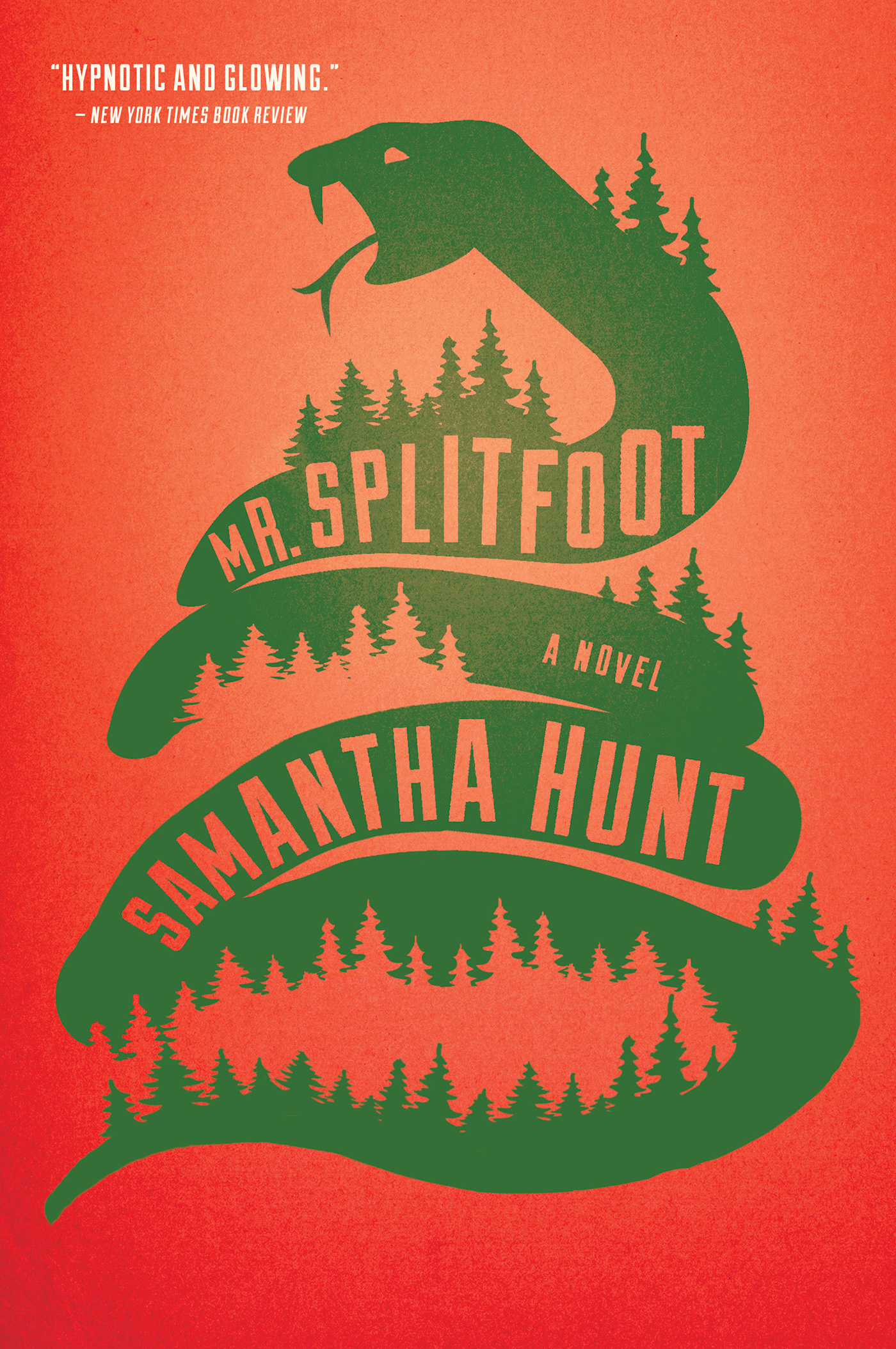