This fictional re-creation of a crime that happened in Mary Downing Hahn's Maryland hometown in 1955—the murder of two teenage girls—is at once a mystery and a coming-of-age story.  Told from several perspectives, including that of the murderer, this latest work from the award-winning and best-selling author is sure to captivate readers.

About the book
Based on an actual crime in 1955, this YA novel is at once a mystery and a coming-of-age story. The brutal murder of two teenage girls on the last day of Nora Cunningham’s junior year in high school throws Nora into turmoil. Her certainties—friendships, religion, her prudence, her resolve to find a boyfriend taller than she is—are shaken or cast off altogether. Most people in Elmgrove, Maryland, share the comforting conviction that Buddy Novak, who had every reason to want his ex-girlfriend dead, is responsible for the killings. Nora agrees at first, then begins to doubt Buddy’s guilt, and finally comes to believe him innocent—the lone dissenting voice in Elmgrove. Told from several different perspectives, including that of the murderer, Mister Death’s Blue-Eyed Girls is a suspenseful page-turner with a powerful human drama at its core.
About the author
Mary Downing Hahn

Party in the Park

Despite the summer heat, I’m sprawled on my bed, radio turned up loud to get the full benefit of Little Richard singing "Tutti Frutti." Dad’s not home from work and Mom’s outside hanging up the wash, so there’s nobody to scream "Turn that radio down!"

The window fan blows warm air on my face. I close my eyes and drift off into a daydream about Don Appleton, a boy in my art class. I’ve loved him since eighth grade. Not that he knows it. Not that he loves me. Anyway . . .

The car radio blasts "Tutti Frutti," and the wind blows through my hair. Don smiles at me as he slides one arm around my shoulder, and I move closer to him, till I’m practically sitting in his lap. The way Cheryl rides with Buddy, her hand on his thigh. He kisses me and someone blows a horn at us. "You’re so pretty," he whispers. "I really like you."

Up ahead is the frozen custard stand. Peggy Turner—Don’s real-life girlfriend—is there with her friends. They all stare. They can’t believe Don is with me. Right in front of them, he kisses me again, and then he—

"Nora, phone!" my little brother hollers up the steps. "Phone!"

Jolted out of my daydream, I holler back, "Who is it?" I’m too hot to move.

Dull from the heat, I go downstairs and take the phone from Billy.

It’s Ellie. "A bunch of kids are getting together in the park tonight," she says. "Can you come?"

My mood suddenly improves. "Sure," I say.

"Sleep over at my house," she says. "We’ll walk to school together tomorrow. Last day! Yay!"

"Who’s coming?" I cross my fingers and hope Ellie will say Don, Don will be there. Which is silly, because he isn’t in the same crowd. Don’s on the basketball team. He dates cheerleaders and majorettes. He lives in Dulaney Park, the rich part of town. I got Mom to drive me by his house last Halloween, just to see what it looked like. I was scared he might see me, so I crouched on the floor and peeked out the car window. His house was all lit up. Some trick-or-treaters were ringing the doorbell, and I told Mom to drive on in case Don came to the door.

"All the kids will be there," Ellie says. "Paul, Gary, Charlie, Cheryl, and lots more. You know how our neighborhood is."

"More exciting than mine, that’s for sure." As I speak, I see Mr. and Mrs. Clements drift past our house, their little dog trailing behind them. They’re old. Their dog is old. Old houses, old people—I guess they go together. Not a person on our block is under forty except Billy and me. Boring, boring, boring.

Ellie lives a mile away on the other side of Elmgrove, in Evergreen Acres. It used to be woods when I was little. Block after block, street after street of row houses built after the war for veterans and their families.

Everybody’s young there, even parents. Most of the dads fought in Europe and Africa and all those islands in the Pacific. My dad was too old for the draft, but Ellie’s father was in the navy. Joined up after Pearl Harbor, the first guy in his town, he told me.

And the kids there—dozens of them, from babies to teenagers. Bikes and wagons and sandboxes in every yard, hopscotch games drawn on the sidewalks, toys scattered on front steps, baby carriages and strollers on porches, ball games in the street, dances in the rec center, souped-up cars with loud radios. It’s never boring on Ellie’s street.

After dinner, I toss what I need into my overnight case, kiss Mom, make a face at Billy, and follow Dad to the old Buick parked in the driveway. He grumbles about driving me over there, but I’m thinking he doesn’t really mind because he can have a beer with his buddies at the Starlight on the way home.

When we’re near Ellie’s house, I tell Dad, "Just let me out at the corner of Thirty-Third and Madison. Then you won’t have to bother with turning around and all."

He glances at me and nods. I hope he hasn’t guessed how much the old Buick embarrasses me. Not only is it out of style, but it has dents on the side and the paint is faded and dull. Inside, the drab ceiling liner sags and the upholstery is torn and frayed. The scratchy old army blanket covering the back seat is disgusting. In the heat, it smells like dust.

Worst of all, the radio’s broken. If my parents ever think I’m responsible enough to get my driver’s license, I can’t possibly take my friends anywhere in a car that doesn’t have a radio.

The thing is, Dad’s an automobile mechanic. Not that you’d guess it. He’s English, and he has a posh accent to prove it. Most people think he’s a college professor at Towson State. Sometimes I let them go on thinking that.

Anyway, he keeps the Buick running like a top—to quote him. What does he care what the car looks like? What’s important is the engine.

"Here?" Dad pulls over on the shoulder and stops.

I open the door, eager to escape before anyone sees me getting out of the car. "That’s Ellie’s house right there, three doors down." I point at the brick row houses, each with its own small yard and its own chain-link fence. Where I wished we lived instead of in a poky old bungalow down at the wrong end of Becker Street, two doors up from the train tracks.

Ellie’s waiting at the door, ready to go. Like me, she’s wearing short shorts, a sleeveless blouse, and scuffed white Keds. Her red hair is pulled back in a curly ponytail. "Dump your stuff in the hall," she says. "The rec center just opened."

Mrs. O’Brien sticks her head out of the kitchen and smiles. "Good to see you, Nora."

"You, too." I smile at Ellie’s mother. She’s dark-haired and sweet-faced, younger than Mom and fun to be around. Best of all, she makes me feel welcome. Special, even. Ellie’s friend. Catholic like Ellie. Not the kind of girl you worry about. A nice girl.

In other words, a boring girl. A flat-chested, tall, skinny girl. Not the kind to sneak out or smoke or be a bad influence.

We cut across the ball field to the rec center, a low cinderblock building backing up to the woods. In the daytime, it’s a summer camp for little kids who sit at picnic tables and weave misshapen potholders on little metal frames, string beads on string, squish clay into lopsided bowls—the same old boring craft projects I hated when I was little. The kind of stuff adults think is creative.

At seven thirty, the sun is low enough to cast long shadows across the grass. The rec center’s white walls reflect the sky’s pink light. I hear the Penguins singing "Earth Angel." The song transforms the hot, dusty park into a place where a boy could fall in love with you—or break your heart.

"Oh, no. Look who’s here." Ellie grabs my arm and points at the parking lot beside the rec center. Buddy’s sitting on the hood of his old

* "An engrossing exploration of how a murder affects a community."—Kirkus Reviews, starred review

"Hahn emphasizes the universality of growing up and facing death."—Horn Book

* "This wrenching novel offers an aggregate portrait of the effects of loss and grief, including both the strengthening and dissolution of relationships."—Publishers Weekly, starred review

"This creepy tale slowly and craftily builds tension . . . It has the added feature of offering a unique snapshot of life in the 1950's."—School Library Journal

"The veracity of this tragedy raises the stakes for readers who are already fans of Hahn's supernatural fiction, and the coming-of-age component of Nora's shattered naïveté is all the more searing."—Bulletin 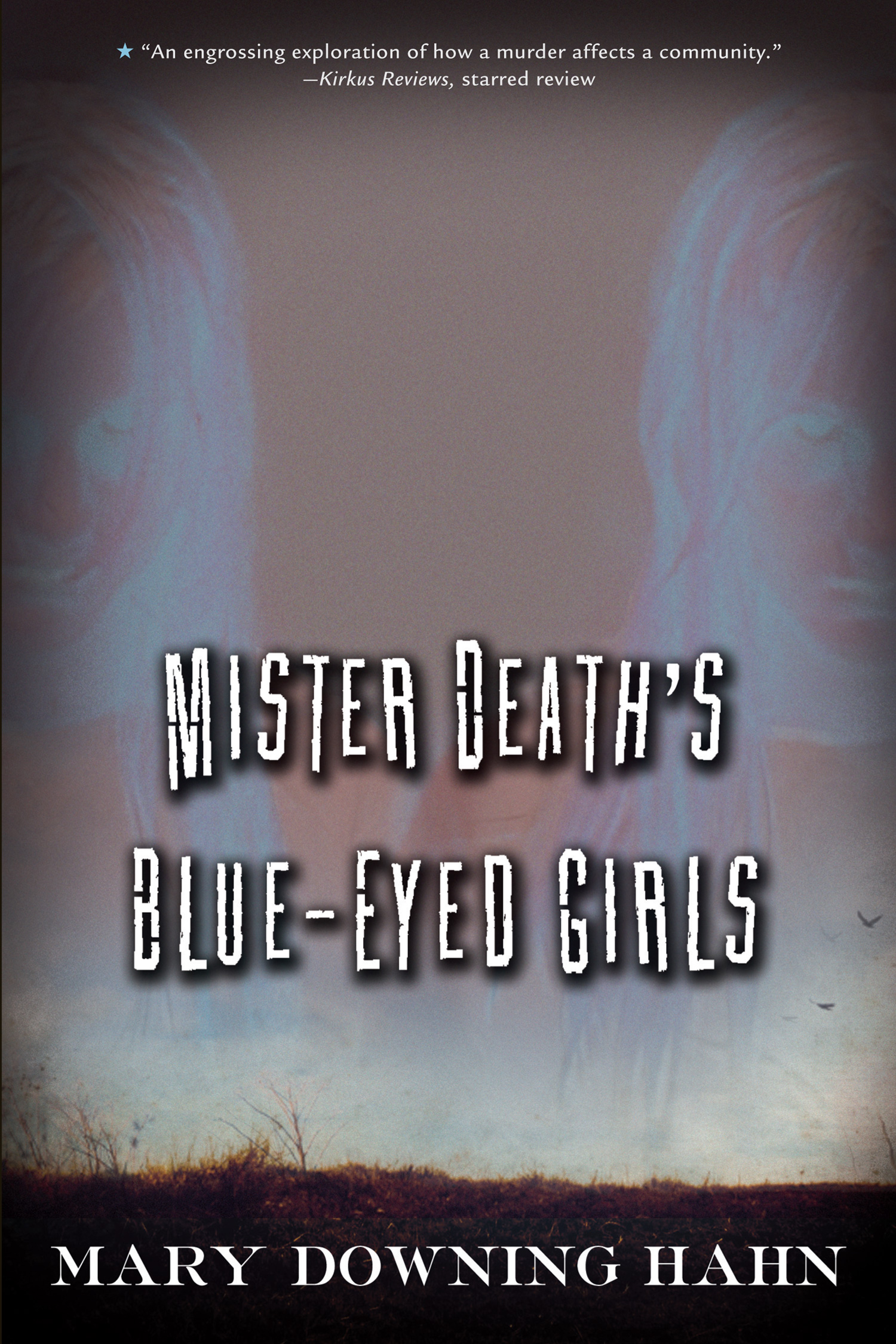