Mississippi Jack: Being an Account of the Further Waterborne Adventures of Jacky Faber, Midshipman, Fine Lady, and Lily of the West

Jacky's on the run ... and this time she's finding song and adventure on the mighty Mississippi.

The intrepid Jacky Faber, having once again eluded British authorities, heads west, hoping that no one will recognize her in the wilds of America. There she tricks the tall-tale hero Mike Fink out of his flatboat, equips it as a floating casino-showboat, and heads south to New Orleans, battling murderous bandits, British soldiers, and other scoundrels along the way. Will Jacky's carelessness and impulsive actions ultimately cause her beloved Jaimy to be left in her wake?

My name is spoken and the damning words are pronounced and I see the bayonets cross my chest, and all the fond hopes that were rising within that chest die. I am found out.

I drop my seabag. Maybe I can make it over the side and into the water, I think desperately and lunge for the side, but then two hard, heavy hands grasp each of my upper arms and I am held fast and then pulled back from the gangway, back from Jaimy and all my friends, and back to what I know will be my doom.

After my years of military service, it is my instinct to obey the authority vested in a British captain and yield myself up, but, No! Not this time, not with Jaimy not fifty feet away. No! No more Good Soldier Jacky, no more Obedient Midshipman Faber! I twist my head to the side, thinking to bite the hand that holds my right arm, and so be able to draw my shiv from its sheath hidden in my left sleeve, but it is all in vain—the marine senses my intention and pulls his hand out of range of my teeth by hauling my arm behind my back. Ow! Damn!

I squeal and squall and struggle and squirm and curse them all to Hell and back, ten times over, and while I try to bring my heel up into the left marine’s crotch, he is too tall for that, and the two just hold me all the tighter. All I can do now is watch as this all plays out around me, and cry out in total frustration and rage. So close. Oh, Jaimy, so close . . .

A stunned silence falls over the formerly festive crowd. What? What is going on? I dimly hear a parent say. Who? What? Piracy? I hear from another dumbfounded onlooker. She’s just a girl! Why are they holding her? How could—?

Clarissa Howe, being the last one down the gangway, is the first to react to my arrest. She turns and charges back up, crying, “Like hell she is! Run, Jacky! Run!” and she launches herself at Captain Rutherford, as it was he who uttered those damning words.

The crowd is now roaring its disapproval, and others come storming up the gangway.

“Get her off me, dammit!” shouts the Captain, flailing his arms against Clarissa’s onslaught of fists, fingernails, and teeth.

“Let her go, you!” snarls Clarissa, baring her teeth for an assault on Captain Rutherford’s defenseless nose. His nose, however, is spared that grisly fate as the arm of a burly Bo’sun’s Mate encircles her about the waist and hauls her to the rail.

“But what do I do with her, Sir?” bleats the obviously overmatched Bo’sun, as he endures a torrent of blows and curses from the struggling form he holds.

“Throw her overboard, that’s what you do!” roars Captain Rutherford, outraged at this unlooked-for chaos on his holy quarterdeck. “And pull up the gangway!”

Clarissa shrieks as she is tossed over the rail, a shriek that is cut short as she hits the water.

If the sound of the splash as Clarissa Worthington Howe enters the chill waters of Boston Harbor gave the Captain any cheer, that cheer would have been quickly dampened by the grim sight of Chrissy, Rose, Hermione, and Minerva, who had wrested themselves from their parents’ joyous embraces to string their bows at Katy Deere’s command of “Dianas! To me!” and now followed her up the not-yet-pulled gangway, arrows nocked and looking for targets.

I can see Katy’s eyes narrow as she sizes up the situation and pulls back and lets fly her arrow, which wings across the quarterdeck and thuds into the chest of the marine at my right hand. I expect him to drop my arm and fall to the deck, but he does not, for Katy’s aim was true, too true—it hit him directly in the middle of his chest where his two white leather belts cross on his breastbone. I doubt the arrow, which had a crude nail as an arrowhead, even pierced his skin. Even so, he stares down at the arrow in horror. I try to jerk free again, but his grip is still strong in spite of his amazement at the thing sticking out of his chest.

Chrissy King pulls and aims and lets fly at Captain Rutherford’s neck, but her father, charging up the gangway, shouting, “Christina! Whatever are you doing?” manages to jostle her enough to spoil her aim, and her arrow buries itself in the mast a scant few inches from the Captain’s outraged face. I know that this is a man who has faced murderous cannon fire, cruel clouds of flying splinters, and the peppering of bullets from enemy sharpshooters, but I know also that he has faced nothing like this.

“Cut the gangway!” he screams, and two men run up with knives and cut the ropes, sacrificing the Juno’s gangway to the riot. The gangway crashes down to the water, spilling the rest of the Dianas into the harbor and preventing any more arrows from being loosed in the direction of the Juno. Chrissy’s father, Mr. King, also joins his daughter and her friends in the muddy water.

Pandemonium rules on the dock. The rest of my Sisters, denied access to the ship, grab fruit and other things from the vendors on the wharf and wing them toward the officers on the deck of the Juno, often with great effect. But not, however, on my two restraining marines, who continue to hold me in an iron grip. I try stomping on their feet, but though they grunt, they do not let go.

“Arrest them!” shouts the Captain, rushing to the rail and shaking his fist at the crowd. “You, there! Constable! Do your duty,” he orders the confused Constable Wiggins, “or, by God, I’ll blockade this godforsaken harbor and starve you all to death!” The Captain then takes a well-thrown fish to his face and staggers back, his great dignity gone, and he is reduced to wiping the fish slime out of his eye and cursing the fact he ever picked up this pack of goddamned Amazons from the middle of the goddamned ocean.

I see Wiggins furrow his brow over his piggy little eyes, and I know he is thinking: The female in question, that Jacky Faber: bad. Authority in the person of the British Captain: good. He nods, then blows his whistle, and he and his henchmen wade into the crowd, swinging their rods.

“Get her below!” yells Captain Rutherford. “Put her in the brig! And keep watch on her. Yeow! Damn!” He ducks as another arrow whizzes by his head. It appears that not all of the Dianas went down with the gangway.

"The fun rolls on like the mighty Mississippi . . . Jacky continues to amaze readers with her clever plots, narrow escapes, and the uncanny ability to outwit thieves and bureaucrats, make money, and have some fun. Fans will look forward to the next installment."--VOYA (4Q) 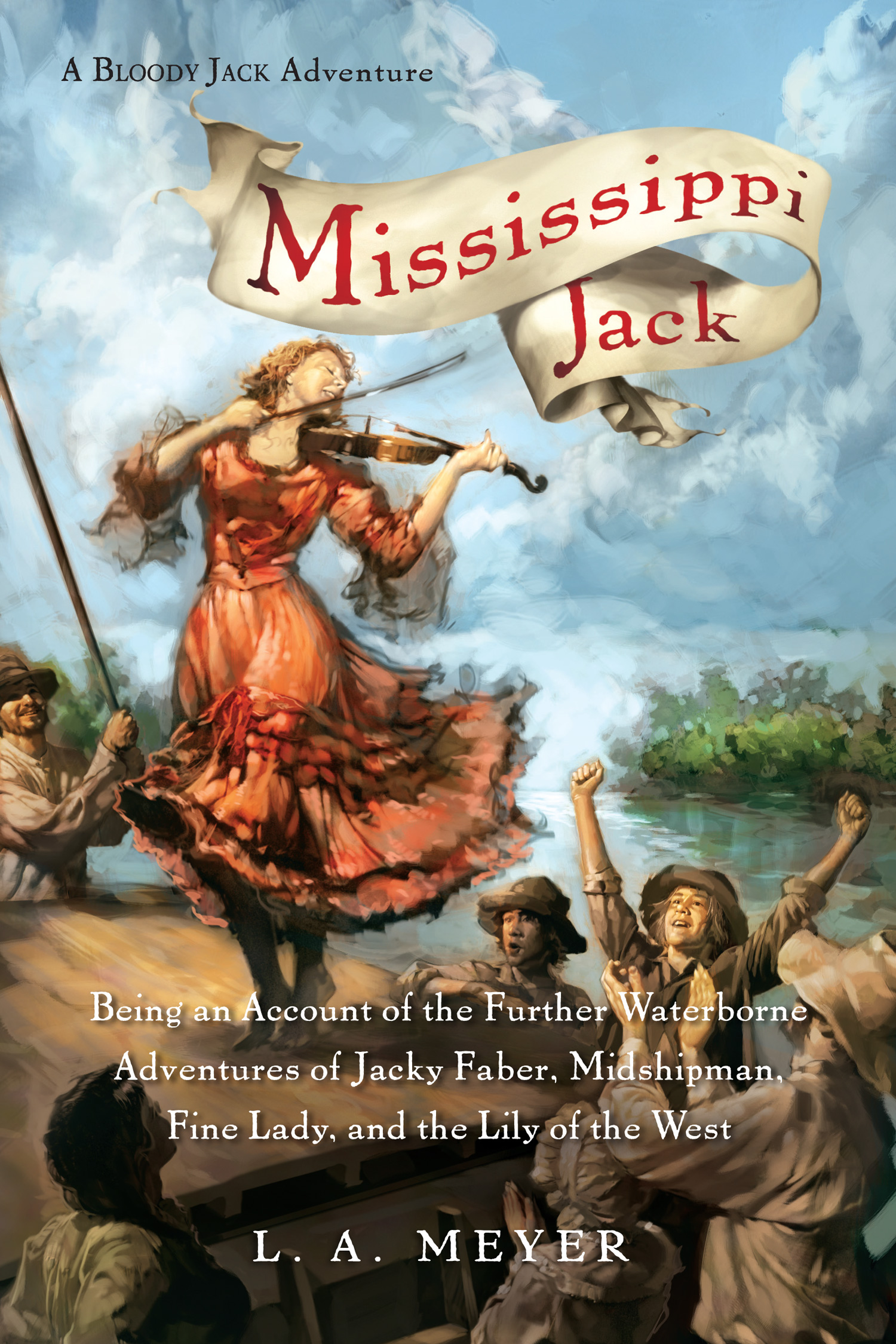