Mission to Pluto: The First Visit to an Ice Dwarf and the Kuiper Belt

Follow New Horizons, a spacecraft the size of a piano, on its first-ever mission to Pluto in this addition to the acclaimed Scientists in the Field series.

In July of 2015, a robotic spacecraft reached Pluto after a nine-and-a-half-year journey. Explore with New Horizons in this new-to-paperback book about the first mission to Pluto, which revealed the ice dwarf and its five moons as they had never been seen before. Images from the mission show a reddish surface covered in mountains of frozen water, moving glaciers, hints of possible ice volcanoes, and an underground ocean. Pluto is geologically alive and changing!

This addition to the Scientists in the Field series goes where no person or spacecraft has ever gone before. Journey with the team of scientists as they build New Horizons, fly it across the solar system, and make new discoveries about a world three billion miles away.

About the author
Mary Kay Carson

Mary Kay Carson and Tom Uhlman are married and live with their dog Ruby in a century-old house surrounded by deer, hawks, woodchucks, songbirds, and other creatures in Cincinnati, Ohio. Check out Mary Kay's other Scientist in the Field books including Park Scientists, Emi and the Rhino Scientist, The Bat Scientist, and Mission to Pluto.

Tom Uhlman has been a freelance photographer for more than 25 years. He photographs lots of news and sporting events, but enjoys shooting pictures of wildlife and the natural world most of all. Visiting Tom's photographs can also be seen in the Scientists in the Field books Park Scientists, Emi and the Rhino Scientist, and The Bat Scientists

* "[Carson's] enthusiasm shines through her clear, conversational narrative, and she quotes from personal interviews as well as press conferences and releases, extending the book's intimacy . . . A worthy companion to Catherine Thimmesh's Team Moon (2006) with similar appeal."

"Well-organized chapters keep the chronological narration flowing smoothly, while sidebars and “Mission Brief” insets supply scientific explanations and data at need-to-know points in the text. Pluto enthusiasts will be fascinated by the recent data that amends many previous assumptions about Pluto . . . readers who want to get in the ground floor of new discoveries will also appreciate this introduction to exciting information forthcoming from the 2014 MU69 flyby."

"Carson maintains a thrilling sense of immediacy, bolstered by Uhlman’s on-the-scene photos—and, of course, New Horizon’s dramatic images of Pluto and its fellow residents of the Kuiper belt."

"This enthusiastic, accessible look at both cutting-edge scientific discovery and the dynamic work behind the scenes will be an easy sell to spacemad kids . . ." 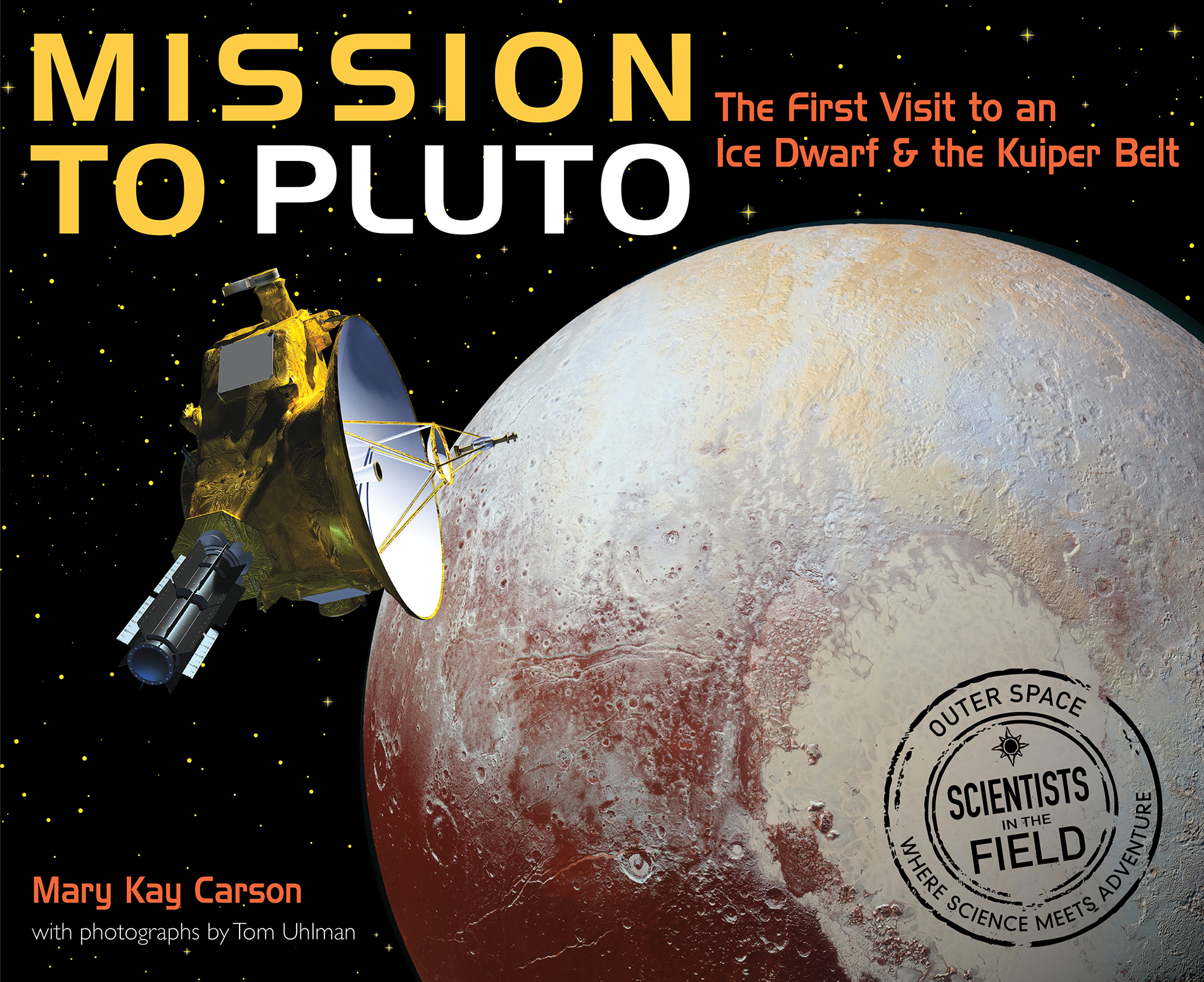