Mercy on These Teenage Chimps

Turning thirteen is not for wimps.

On his thirteenth birthday, Ronnie woke up feeling like a chimp—all long armed, big eared, and gangly. He's been muddling through each gawky day since. Now his best friend, Joey, has turned thirteen, too—and after Joey humiliates himself in front of a cute girl, he climbs a tree and refuses to come down. So Ronnie sets out to woo the girl on Joey's behalf. After all, teenage chimps have to stick together.

Acclaimed author Gary Soto tells a fun and touching story about friendship, understanding, and the painful insecurities of being thirteen.

I, Ronaldo Gonzalez, better known as Ronnie, was like any other boy until I turned thirteen and woke up as a chimpanzee. I examined my reflection in the bathroom mirror. What was this? The peachy fuzz on my chin? The splayed ears? The wide grin that revealed huge teeth? I played with my mouth, squeezing it as I had seen the chimpanzees do on Animal Planet, my favorite TV channel. I wiggled my ears. My nose appeared flatter than ever.

Mom noticed the change right away. Instead of eggs, bacon, and buttered toast, my usual morning pick-me-up, I had a bowl of Froot Loops and a banana, but not before I juggled three apples and a single orange. I seemed to have been charged with an uncanny ability to keep things in the air.

“What’s gotten into you?” She laughed. “You should be in the circus!”

“It’s my birthday,” I answered. I was glad that I had been born in spring. Spring was when the mountains appeared majestically in the distance and retirees got out their mowers to clobber the first dandelions sprouting on their lawns. Spring was when birds and flowers did their magic of lifting the souls of regular people.

I could see Mom registering in her mind that I was no longer a kid. She pulled at my cheek tenderly and told me that I was a young man and that soon she would lose me to some trashy girl. Of course, I promised never to move away and that the trashy girl could come live with us.

Mom playfully spanked my bottom thirteen times, my new age, and then asked me if I had hurt my leg. She had noticed that my gait seemed wider and was sort of rolling. She also inquired about my arms. They were hanging so low at my side that I could tie my shoes without bending over.

That morning I felt curiously different, and even older when Mom let me sit at the head of the kitchen table—ever since Dad had taken off, his place usually held piles of clean laundry. And that’s what I did that morning. I accepted my position as head of the table, whipping out the newspaper and muttering to myself that the San Francisco Giants were already four behind the Los Angeles Dodgers.

I was suddenly a teenage chimp. My best friend, Joey Rios, a few days older than me, had also turned into a chimp. For years we had been just like other boys—muddy, with scabs on our knees and elbows—until we both had growth spurts. Our arms, it seemed, hung a few inches longer and our ears sprung out from the sides of our heads. We caught ourselves beating our chests and jumping, especially Joey, who was a wrestler. Each time he pinned an opponent he’d jump up and down and circle the mat, pacing off his territory. He just couldn’t help himself.

And how we could climb! Joey and I often scaled the tall tree in front of his house, where we sat for hours. Most of our talk involved girls and food. We avoided talking about our looks, as we were doubtful that we were handsome. Indeed, I sometimes played a refrain in my mind: We ugly, we real ugly.

“Do you know the meaning of life?” On my birthday I’d asked Joey this question thirty feet up, with a chimp’s view of our small-town neighborhood.

“Not a bit,” Joey answered. He pursed his lips, spat at the ground, and wiped his mouth with the back of his hand. “Except I know spit takes three seconds to hit my cat.”

His cat looked around, mystified by the sudden presence of rain.

Joey didn’t answer. He just spat again, and again his cat, none too smart, looked around until a sparrow caught his attention. He pranced after the sparrow, who, blessed with keen sight and swift wings, lifted up and away.

A week later we were policing our school for the usual litter of potato chip bags, candy wrappers, and soda cups. We had detention for being tardy—on the way to school, we had stopped to swing on the monkey bars at the public playground.

“This is way nasty,” I groaned, wincing at the sight of a swollen hot dog. I poked it with a stick and deposited it in a plastic trash bag. It was a sickening sight. We were non-meat eaters, devoted vegetarians who loved fruits and veggies, plus what my mom called “monkey juice,” the fruity smoothies I concocted in the blender.

“Who’s this?” Joey held up a photo he had found on the ground.

We studied the photo, our heads nearly touching.

“She’s pretty,” I said longingly. Then, We ugly, we real ugly, repeated in my mind. The pang was like a fishhook in my heart.

Joey dropped the photo into his trash bag, and we continued with our task until we saw, in the distance, Coach Puddlefield approaching. Every dozen or so steps he slowed to hike up his pants—he was a big man whose stomach cast a shadow in front of him. Behind his back, we students called him Coach Bear. He was way hairy and growled a lot.

Coach Bear chugged across the lawn. “You two monkeys,” he bellowed. “I got a job for you.”

The last time Coach Bear had required our service was to put all the balls away in the gymnasium. Joey, an occasional show-off, had spotted a volleyball in the rafters. He spat into his hands and climbed the bleachers, pushed himself up on the window ledge, grabbed and swung from the exercise rope, shimmied up the rope, and boosted himself up onto an iron girder. Then his fingers tickled the ball from where it was caught behind the rafter. Coach had yelled at him for risking his neck, but Joey was just doing what any chimp would have done.

Now it seemed that Coach Bear required our services again. He halted in front of us, giving his pants one final tug. He wiped his brow with a thick finger.

“And what is that, exactly?”

“Picking up litter,” I said, jiggling the contents of the plastic trash bag. “We have detention.”

“We’re vegetarians,” I divulged. I had studied the diets and life spans of carnivores and noncarnivores, and was prepared to offer a litany of reasons why a person, young or old, skinny or fat, boy or girl, should avoid meat like the plague. “Vegetarians! No wonder you boys are so skinny. Not you, Rios.” Coach Bear corrected himself, as he was proud of Joey, the wrestler. Joey was anything but a weakling. The previous year he had captured the regional championship, and Coach had a soft spot for champions. Then his eyes slid over to me, and he held his tongue, which was muscled from yelling at kids for a dozen or so years. “Anyhow, I’m here to ask if you guys could help out with a banquet tonight. I need two more kids, and if you do it you can quit the trash pickup.” He told us that the regional sports awards banquet would be held at the high school down the street.

Joey turned to me. I wiggled my ears as an affirmative yes.

“What are we supposed to wear?” Joey asked.

Joey, biting his lower lip, hesitated and asked, “Do we wear pants?”

Coach Bear instructed us to get there by five thirty, hiked up his pants as he turned, and sized up trouble on another part of the school grounds. He waved a paw at two kids trying to shimmy up a drainpipe.

"[A] lighthearted, off-beat slice of life . . . Breezy and entertaining."--Kirkus Reviews

"This rollicking novel about the painful beginnings of adolescence should have wide appeal."--The Horn Book 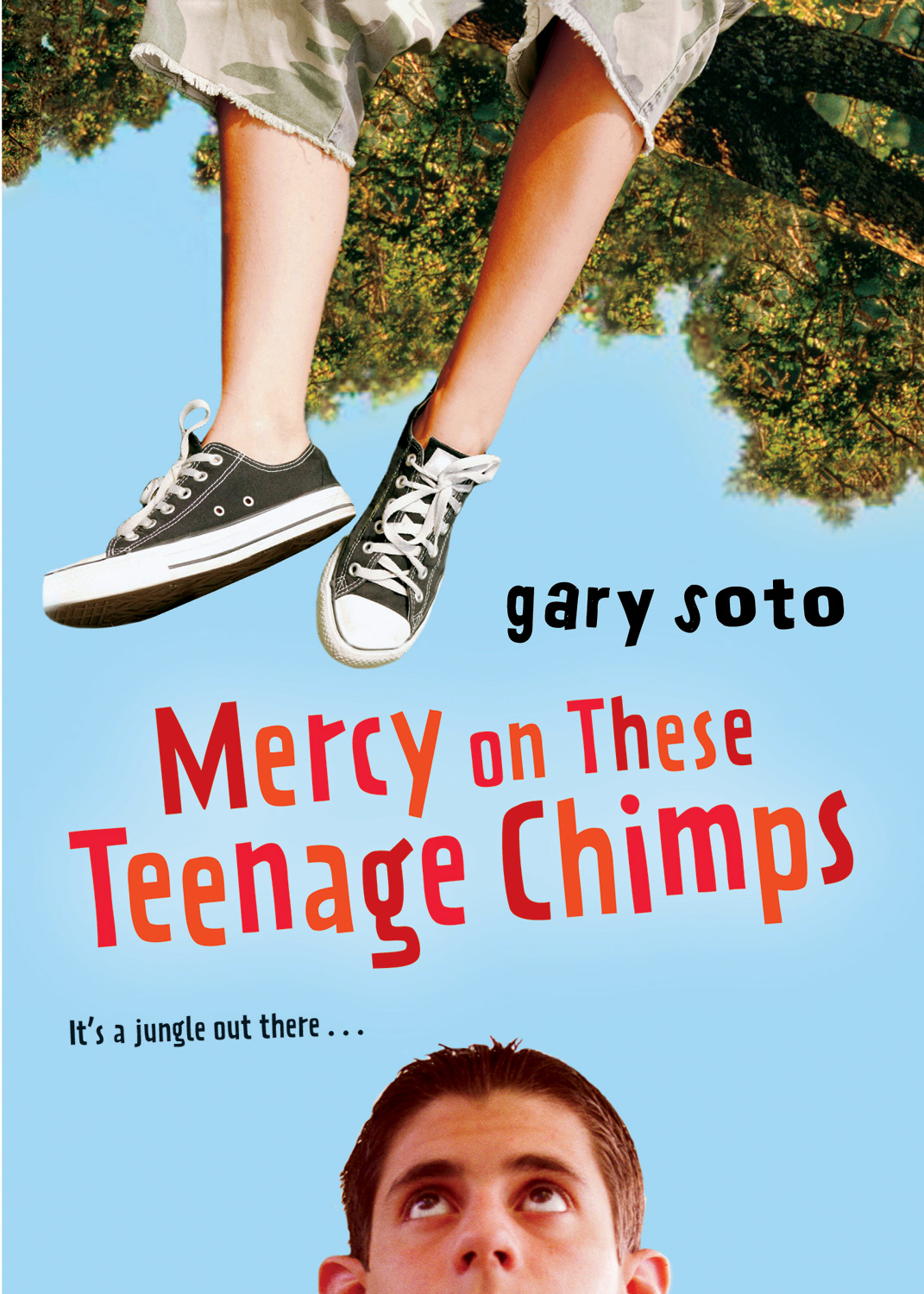