Ash by Malinda Lo meets Marissa Meyer’s Cinder: A YA retelling of Cinderella about an indomitable inventor-mechanic who finds her prince but realizes she doesn't want a fairy tale happy ending after all.

Nicolette’s awful stepsisters call her “Mechanica” to demean her, but the nickname fits: she learned to be an inventor at her mother’s knee. Her mom is gone now, though, and the Steps have pushed her into a life of dreary servitude. When she discovers a secret workshop in the cellar on her sixteenth birthday—and befriends Jules, a tiny magical metal horse—Nicolette starts to imagine a new life for herself. And the timing may be perfect: There’s a technological exposition and a royal ball on the horizon. Determined to invent her own happily-ever-after, Mechanica seeks to wow the prince and eager entrepreneurs alike.

Betsy Cornwell is the New York Times best-selling author of The Circus Rose, The Forest Queen, Mechanica, Venturess, and Tides. She graduated from Smith College and was a columnist and editor at Teen Ink before receiving an MFA in creative writing from Notre Dame, where she also taught fiction. She now lives in Ireland with her son. www.betsycornwell.com Twitter: @Betsy_Cornwell Instagram: @BetsyCornwell

Take the key from behind your grandmother’s portrait. I am certain your father still keeps it in the foyer—no one will have touched it in years, I hope. But you, darling, will be able to find the key.

Walk to the end of the hall and open the cellar door. It has no lock; do not fear closing it behind you. Go inside.

Be careful when you walk down the stairs; the wood is weak and treacherous. Bring a candle. The cellar is very dark.

At the bottom of the stairs, turn left. An old writing desk lurks there in the shadows. Push it aside. No doubt you’ve grown up a good strong girl and won’t need help.

Look: there is a door in the wall.

You won’t see a keyhole, but run a finger over the place where one would be. I know no daughter of mine will mind the dust.

Twist the key into the keyhole. You might need to worry it a little.

There, darling. You’ve found it. Use it well.

My mother was wrong about one thing: the cellar door did have a lock. Stepmother had locked me inside enough times for me to know.

She was right about everything else. I was plenty strong enough to push aside the writing desk; I only cursed myself for never having done so before.

Of course, I’d thought Mother’s workshop was long since destroyed. I’d seen the fire myself.

Besides, that desk had been my dearest friend. The first time Stepmother locked me in the cellar, a forgotten stack of brown and brittle paper in its top drawer and a cracked quill and green ink bottle underneath provided me with hours of amusement. I drew improbable flying machines and mechanized carriages; I drew scandalous, shoulder-baring gowns with so many flounces and so much lace that their creation would have exhausted a dozen of the Steps’ best seamstresses.

Not that Stepmother hired seamstresses anymore. I provided her with much cheaper, if less cheerful, labor. I sewed all of their dresses, though my fingers were not small or nimble enough for the microscopic stitching she and my stepsisters required. I took care not to show how much I preferred fetching water and chopping wood to sewing. Stepmother considered “hard labor” the most punishing of my chores, so she assigned it often.

I never told her how those chores offered me precious, rare glimpses into my memories of Mother. I could see her face, covered in a subtle powdering of soot, laughing at my disapproving father as she carried an armload of wood or a sloshing pail of water down to the cellar. Until recently, those memories, and a few of her smallest inventions, were all I had of her.

I needed to hide her machines from Stepmother, of course: the whirling contraption that dusted cupboards for me, the suction seals that kept mice out of the drawers, the turn-crank in one closet that polished shoes. Mother had taught me enough to keep her machines in repair. When she was alive, she’d dreamed of my going to Esting City for a real apprenticeship, as she herself had always longed to do. But Father would never hear of it.

Anyway, neither of them was able to help decide my future anymore. Now that they were gone, all I knew was that I could not abandon their house to the Steps.

I digress. Father always told me not to worry over things that can’t be helped, but I never took his instructions to heart.

He died on New Year’s Eve, the year I was ten. I wept noisily over the dispatch letter that announced his death, smearing tears onto the sleeves of what I didn’t know would be my last new dress for years. Stepmother stood silent behind me.

He had taken his new wife, with her two mewling, puny daughters, only a few months earlier. I’d tried to befriend Piety and Chastity at first, to beguile them into joining me for a horseback ride, a walk, or even a simple game of boules on the lawn.

I tried talking about books with them too. They responded with glazed expressions and derisive giggles, and when I finally had the chance to look at the beautiful collection of leather-bound books Stepmother had bought them, I found the pages ripped out, and replaced with magazines and catalogs.

Then I knew for sure we’d never understand each other.

After Father died, the Steps grew so much worse. Within a day of his death, they ousted me from my lifelong bedroom, and I was too stunned with grief to argue. My room was next to my stepsisters’, and Stepmother said they needed the additional boudoir space. She liked everyone to think that she would never grant her daughters any excess, but in private she spoiled them as if they were the Heir’s famously beloved horses.

On the night after she dismissed our housekeeper, she told me to wash the supper dishes. Then—the only time I’ve done it—I did rebel. I screamed at her like a child, like the child I still was. My position in the family was all I had left to tie me to my parents’ love. Though I’d felt it slipping away, until that moment I had chosen denial.

Clearing my eyes of tears, I stared my stepmother down. She looked back at me. Though I had only seen coldness and distance in her face before, I saw something else then. I saw challenge. We both knew what she was doing: she was making me a servant. But I began to think she might be testing me, preparing me for some sacred rite of entrance into her true family. Making sure I was a good daughter.

So I nodded, and I looked down, and I retreated to the kitchen. When your heart is broken, it’s easier to follow rules.

I kept waiting, too, hoping I might pass her test. I carried that hope with me like a rosary, counting the worn beads each time she assigned me some yet more menial chore.

If it was ever a test, I must have failed.

Despite what she had reduced me to since Father’s death, though, I still could not believe Stepmother was entirely evil. Do not mistake me: she was cruel and sharp, and she spoiled her own children to a fault while denying me any scrap of affection. She took a hypocrite’s great pleasure in her own abstinence. She enjoyed denying herself more than she ever relished an indulgence. I could list her flaws for days.

But she gave me my mother’s letter. I didn’t know why she did, or why she didn’t read it first. Perhaps, I thought, it was because she loved her own daughters too much to disrespect another mother’s wishes; perhaps I would never know the reason.

It must have been Stepmother, I thought when I found the envelope slipped under my door one autumn morning.

on her sixteenth birthday

She even gave it to me on the correct day.

Late that night, I crept through the hall to the portrait of Grandmother. She cut an imposing figure atop her huge black stallion, Jules. Mother’s family had long been famous for their hunt horses, and Jules was the greatest stallion they ever produced. There were even rumors that th...

“With a unique mix of steampunk and the maker movement, Mechanica introduces a smart, strong, talented heroine who may be able to find her prince, but doesn’t necessarily want to.”

“If you are a fan of fantasy or fairy tale retellings, you’ll love Mechanica.”

“Combines a feminist Cinderella story with a beautiful steampunk world.”

“Betsy Cornwell twists Cinderella to her own unique take, and Mechanica will definitely please readers.”

“Sure to appeal to fans of Marissa Meyer’s Lunar Chronicles. . . With a strong focus on making your dreams happen no matter what, this feminist fairy tale breathes new life into an old favorite.”

"Mechanica has a thoroughly modern theme and teaches young readers to find their passion and become self-reliant."

"Readers looking for an atypical fairy tale will find this refreshing because it relies less on traditional romance or happy endings, and more on living independently and unconventionally, loving freely, and being able to choose your own destiny."

"Fans of fairy-tale updates will find it easy to lose themselves in this bright, romantic story, whose hero shows she can not only have it all but also do it herself."

"Readers who can't get enough of the growing steampunk trend will happily pick this up."' 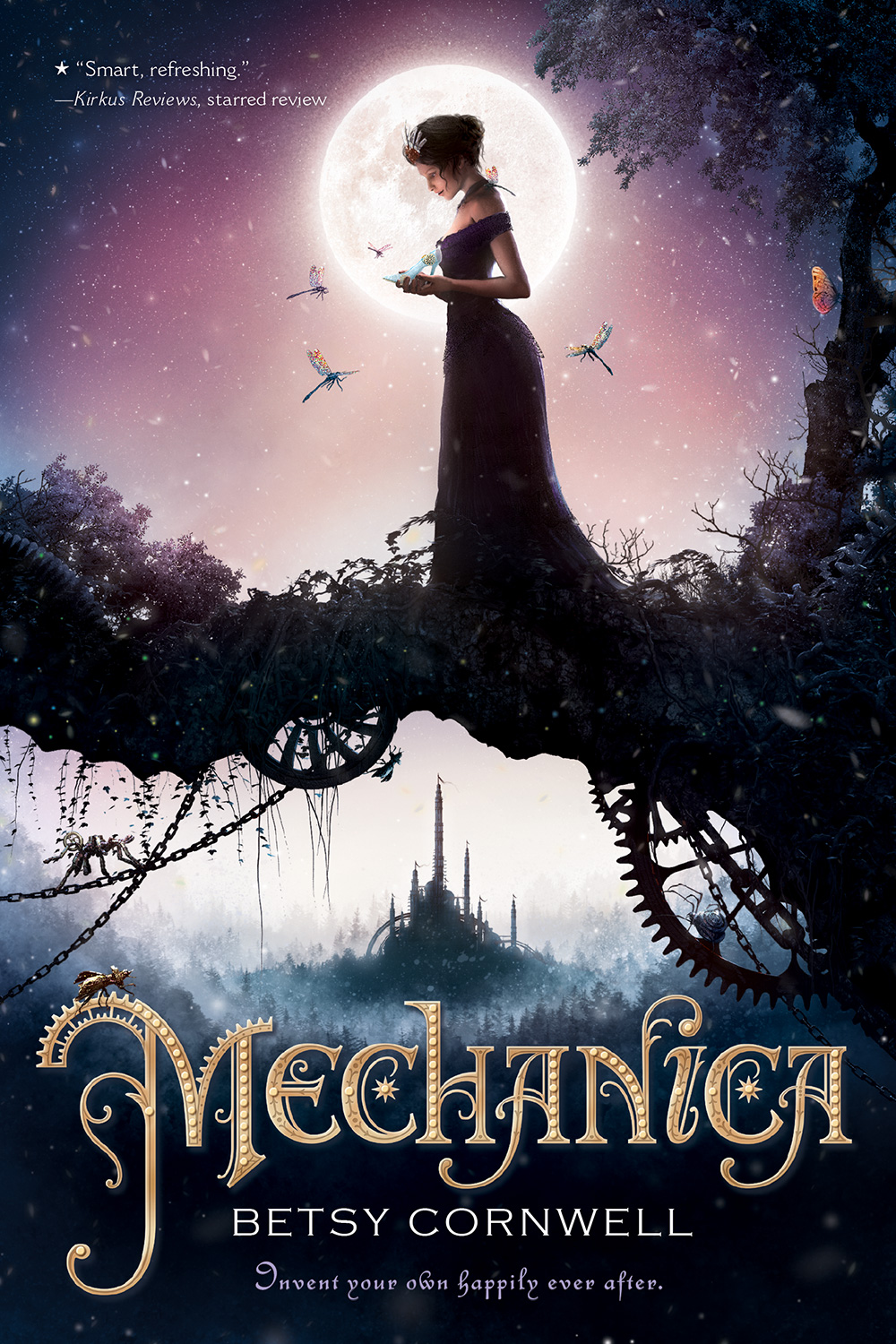