The first book about the beloved nanny Mary Poppins, who is practically perfect in every way!

From the moment Mary Poppins arrives at Number Seventeen Cherry-Tree Lane, everyday life at the Banks house is forever changed.

It all starts when Mary Poppins is blown by the east wind onto the doorstep of the Banks house. She becomes a most unusual nanny to Jane, Michael, and the twins. Who else but Mary Poppins can slide up banisters, pull an entire armchair out of an empty carpetbag, and make a dose of medicine taste like delicious lime-juice cordial? A day with Mary Poppins is a day of magic and make-believe come to life!

If you want to find Cherry­-­Tree Lane all you have to do is ask the Policeman at the cross­-­roads. He will push his helmet slightly to one side, scratch his head thoughtfully, and then he will point his huge white­-­gloved finger and say: “First to your right, second to your left, sharp right again, and you’re there. Good­-­morning.”

And sure enough, if you follow his directions exactly, you will be there—right in the middle of Cherry­-­Tree Lane, where the houses run down one side and the Park runs down the other and the cherry­-­trees go dancing right down the ­middle.

If you are looking for Number Seventeen—and it is more than likely that you will be, for this book is all about that particular house—you will very soon find it. To begin with, it is the smallest house in the Lane. And besides that, it is the only one that is rather dilapidated and needs a coat of paint. But Mr. Banks, who owns it, said to Mrs. Banks that she could have either a nice, clean, comfortable house or four children. But not both, for he couldn’t afford ­it.

And after Mrs. Banks had given the matter some consideration she came to the conclusion that she would rather have Jane, who was the eldest, and Michael, who came next, and John and Barbara, who were Twins and came last of all. So it was settled, and that was how the Banks family came to live at Number Seventeen, with Mrs. Brill to cook for them, and Ellen to lay the tables, and Robertson Ay to cut the lawn and clean the knives and polish the shoes and, as Mr. Banks always said, “to waste his time and my ­money.”

And, of course, besides these there was Katie Nanna, who doesn’t really deserve to come into the book at all because, at the time I am speaking of, she had just left Number ­Seventeen.

“Without by your leave or a word of warning. And what am I to do?” said Mrs. ­Banks.

“Advertise, my dear,” said Mr. Banks, putting on his shoes. “And I wish Robertson Ay would go without a word of warning, for he has again polished one boot and left the other untouched. I shall look very ­lopsided.”

“That,” said Mrs. Banks, “is not of the least importance. You haven’t told me what I’m to do about Katie ­Nanna.”

“I don’t see how you can do anything about her since she has disappeared,” replied Mr. Banks, “But if it were me—I mean I—well, I should get somebody to put in the Morning Paper the news that Jane and Michael and John and Barbara Banks (to say nothing of their Mother) require the best possible Nannie at the lowest possible wage and at once. Then I should wait and watch for the Nannies to queue up outside the front gate, and I should get very cross with them for holding up the traffic and making it necessary for me to give the policeman a shilling for putting him to so much trouble. Now I must be off. Whew, it’s as cold as the North Pole. Which way is the wind ­blowing?”

And as he said that, Mr. Banks popped his head out of the window and looked down the Lane to Admiral Boom’s house at the corner. This was the grandest house in the Lane, and the Lane was very proud of it because it was built exactly like a ship. There was a flagstaff in the garden, and on the roof was a gilt weathercock shaped like a ­telescope.

“Ha!” said Mr. Banks, drawing in his head very quickly. “Admiral’s telescope says East Wind. I thought as much. There is frost in my bones. I shall wear two overcoats.” And he kissed his wife absentmindedly on one side of her nose and waved to the children and went away to the ­City.

Now, the City was a place where Mr. Banks went every day—except Sundays, of course, and Bank Holidays—and while he was there he sat on a large chair in front of a large desk and made money. All day long he worked, cutting out pennies and shillings and half­-­crowns and threepenny­-­bits. And he brought them home with him in his little black bag. Sometimes he would give some to Jane and Michael for their money­-­boxes, and when he couldn’t spare any he would say, “The Bank is broken,” and they would know he hadn’t made much money that ­day.

Well, Mr. Banks went off with his black bag, and Mrs. Banks went into the drawing­-­room and sat there all day long writing letters to the papers and begging them to send some Nannies to her at once as she was waiting; and upstairs in the Nursery, Jane and Michael watched at the window and wondered who would come. They were glad Katie Nanna had gone, for they had never liked her. She was old and fat and smelt of barley­-­water. Anything, they thought, would be better than Katie Nanna—if not much ­better.

When the afternoon began to die away behind the Park, Mrs. Brill and Ellen came to give them their supper and to bath the Twins. And after supper Jane and Michael sat at the window watching for Mr. Banks to come home, and listening to the sound of the East Wind blowing through the naked branches of the cherry­-­trees in the Lane. The trees themselves, turning and bending in the half light, looked as though they had gone mad and were dancing their roots out of the ­ground.

“There he is!” said Michael, pointing suddenly to a shape that banged heavily against the gate. Jane peered through the gathering ­darkness.

“That’s not Daddy,” she said. “It’s somebody ­else.”            Then the shape, tossed and bent under the wind, lifted the latch of the gate, and they could see that it belonged to a woman, who was holding her hat on with one hand and carrying a bag in the other. As they watched, Jane and Michael saw a curious thing happen. As soon as the shape was inside the gate the wind seemed to catch her up into the air and fling her at the house. It was as though it had flung her first at the gate, waited for her to open it, and then had lifted and thrown her, bag and all, at the front door. The watching children heard a terrific bang, and as she landed the whole house ­shook.

“How funny! I’ve never seen that happen before,” said ­Michael.

“Let’s go and see who it is!” said Jane, and taking Michael’s arm she drew him away from the window, through the Nursery and out on to the landing. From there they always had a good view of anything that happened in the front ­hall.

Presently they saw their Mother coming out of the drawing­-­room with a visitor following her. Jane and Michael could see that the newcomer had shiny black hair—“Rather like a wooden Dutch doll,” whispered Jane. And that she was thin, with large feet and hands, and small, rather peering blue ­eyes.

"When Mary Poppins is about, her young charges can never tell where the real world merges into make-believe. Neither can the reader, and that is one of the hallmarks of good fantasy."--The New York Times 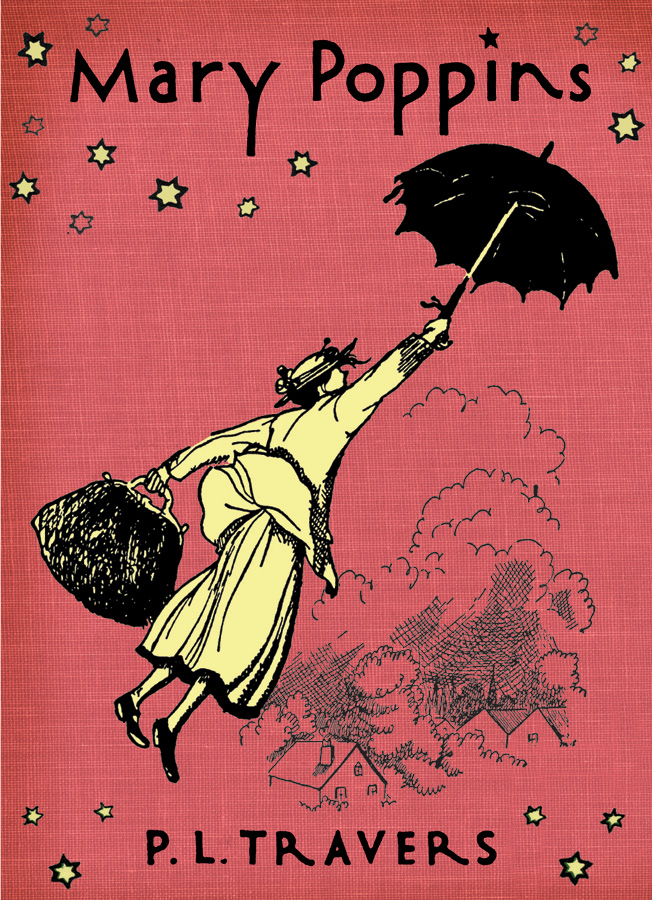