The second book about Mary Poppins and the children of Seventeen Cherry-Tree Lane!

Pulled down from the clouds at the end of a kite string, Mary Poppins is back. In Mary’s care, the Banks children meet the King of the Castle and the Dirty Rascal, visit the upside-down world of Mr. Turvy and his bride, Miss Topsy, and spend a breathless afternoon above the park, dangling from a clutch of balloons.

It was one of those mornings when everything looks very neat and bright and shiny, as though the world had been tidied up ­overnight.

In Cherry-Tree Lane the houses blinked as their blinds went up, and the thin shadows of the cherry-trees fell in dark stripes across the sunlight. But there was no sound anywhere, except for the tingling of the Ice Cream Man’s bell as he wheeled his cart up and ­down.

said the placard in front of the cart. And presently a Sweep came round the corner of the Lane and held up his black sweepy ­hand.

The Ice Cream Man went tingling up to ­him.

“Penny one,” said the Sweep. And he stood leaning on his bundle of brushes as he licked out the Ice Cream with the tip of his tongue. When it was all gone he gently wrapped the cone in his handkerchief and put it in his ­pocket.

“No. I collect them!” said the Sweep. And he picked up his brushes and went in through Admiral Boom’s front gate because there was no Tradesman’s ­Entrance.

The Ice Cream Man wheeled his cart up the Lane again and tingled, and the stripes of shadow and sunlight fell on him as he ­went.

“Never knew it so quiet before!” he murmured, gazing from right to left, and looking out for ­customers.

At that very moment a loud voice sounded from Number Seventeen. The Ice Cream Man cycled hurriedly up to the gate, hoping for an ­order.

“I won’t stand it! I simply will not stand any more!” shouted Mr. Banks, striding angrily from the front door to the foot of the stairs and back ­again.

“What is it?” said Mrs. Banks anxiously, hurrying out of the dining­-­room. “And what is that you are kicking up and down the ­hall?”

Mr. Banks lunged out with his foot and something black flew half­-­way up the ­stairs.

He ran up the stairs and kicked it down again. It spun for a moment on the tiles and fell at Mrs. Banks’ ­feet.

Trembling, Mrs. Banks stooped and picked up the hat. It was covered with large, shiny, sticky patches and she noticed it had a peculiar ­smell.

She sniffed at the ­brim.

“It is boot­-­polish,” retorted Mr. Banks. “Robertson Ay has brushed my hat with the boot­-­brush—in fact, he has polished ­it.”

“I don’t know what’s come over this house,” Mr. Banks went on. “Nothing ever goes right—hasn’t for ages! Shaving water too hot, breakfast coffee too cold. And now—this!”

He snatched his hat from Mrs. Banks and caught up his ­bag.

“I am going!” he said. “And I don’t know that I shall ever come back. I shall probably take a long sea­-­voyage.”

Then he clapped the hat on his head, banged the front door behind him and went through the gate so quickly that he knocked over the Ice Cream Man, who had been listening to the conversation with ­interest.

“It’s your own fault!” he said crossly. “You’d no right to be there!” And he went striding off towards the City, his polished hat shining like a jewel in the ­sun.

The Ice Cream Man got up carefully and, finding there were no bones broken, he sat down on the kerb, and made it up to himself by eating a large Ice ­Cream. . . .

“Oh, dear!” said Mrs. Banks as she heard the gate slam. “It is quite true. Nothing does go right nowadays. First one thing and then another. Ever since Mary Poppins left without a Word of Warning everything has gone ­wrong.”

She sat down at the foot of the stairs and took out her handkerchief and cried into ­it.

And as she cried, she thought of all that had happened since that day when Mary Poppins had so ­suddenly and so strangely ­disappeared.

Nurse Green had arrived soon after and had left at the end of a week because Michael had spat at her. She was followed by Nurse Brown who went out for a walk one day and never came back. And it was not until later that they discovered that all the silver spoons had gone with ­her.

And after Nurse Brown came Miss Quigley, the Governess, who had to be asked to leave because she played scales for three hours every morning before breakfast and Mr. Banks did not care for ­music.

“And then,” sobbed Mrs. Banks to her handkerchief, “there was Jane’s attack of measles, and the bath­-­room geyser bursting and the Cherry-Trees ruined by frost and——”

"There is an extraordinary charm about these books . . . They are whimsical, sentimental [and] also funny, imaginative, poetical and genuinely creative."--The New York Evening Post 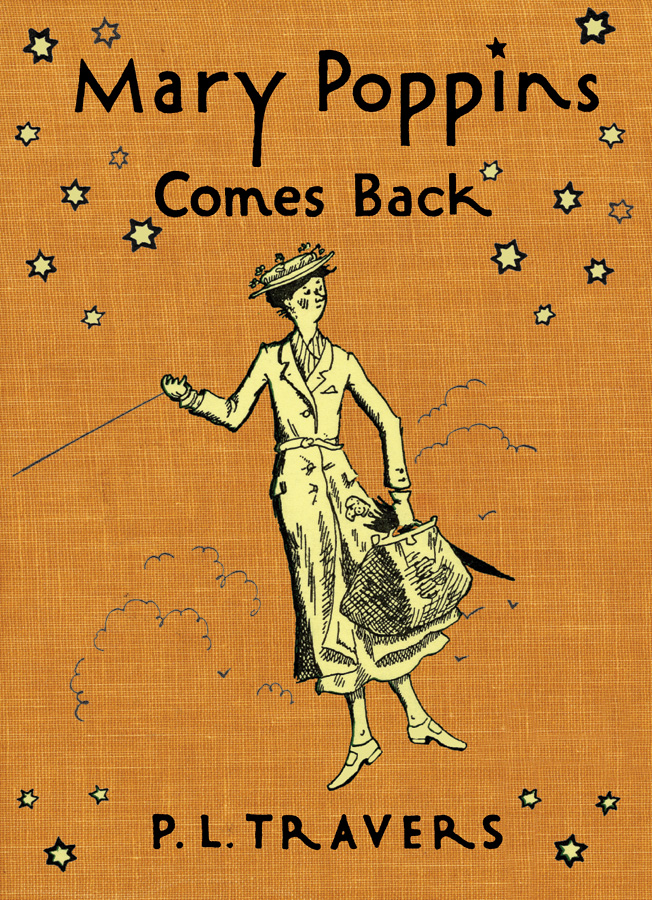