When is magic not magic? Laura is a girl who goes out of her way to find adventure. So when her family moves to a house with a well in the yard—a wishing well, according to Lydia, Laura’s opinionated new neighbor—Laura is all too willing to make a wish and see what happens. Plenty happens. Thanks to the well, Laura and her new friends help save Miss Isabella’s house from foreclosure, rescue the almost long-lost heir to a fortune, and even solve the mystery of the antique desk. But is the well truly granting wishes? Or is something else responsible for the adventures of that summer?

Laura sat looking out of the window, watching houses and barns and woods wheel slowly by, as the tiny train chugged uphill.

Her brother James came down the aisle and squeezed in next to her. “Seventeen minutes exactly,” he said, looking at his watch and answering her unspoken question. James always knew things exactly. If he didn’t know, he found out. Right now he had been in conference with the conductor.

“Seventeen minutes more, and a whole new life will unfold!” gloated Laura. “Oh, James, isn’t it going to be wonderful?”

“Wait and see,” said James. He was never one to commit himself.

“Oh, James,” said Laura again, in tones of disgust. Neither she nor anyone else had ever called James “Jimmy,” or even “Jim,” but it wasn’t for the reasons you might think. He wasn’t stodgy or prissy or no fun; James was a leader. With his broad shoulders and his steady blue eyes and his firm jaw he looked serious and practical and he was, but that wasn’t all there was to it. Behind the blue eyes his thoughts were deep.

“I found out all about it,” he went on. “There’re five stops before we get there. The trains aren’t always dinky little one-car ones like this; in rush hours there’re two cars and sometimes three. They leave every hour on the hour. Here. Have a timetable.”

Laura put the timetable in her pocket and stored the information away in her mind. She and James both liked useful facts; you could never tell when they might come in handy, though why, once they were really settled in the country, they would ever want to take a train away from it, Laura couldn’t imagine. To live in the country had been her heart’s desire ever since she could remember, and now they were actually moving there. Today was moving day. In seventeen, no, fifteen, minutes now, they would be there. Laura bounced in her seat again.

“Cemetery!” cried the conductor, and the one car that called itself a train ground to a halt. Laura wondered if a town could really be called Cemetery and what it felt like to live there. She caught James’s eye and giggled.

“Think how the people’s friends must feel, addressing Christmas cards to them there!” said James, just as if she had spoken aloud. He and Laura could often read each other’s minds. Maybe it was because they were twins, though not identical.

“Not exactly,” James would remind her. “Who didn’t get A in Arithmetic?”

But today her mind and James’s were like two hearts that beat as one, and she knew he was every bit as excited as she was, though he didn’t let on. It was exciting to be on the train by themselves, and it was exciting to be moving (though they had done that every October first, anyway, back in the city), but to be moving to the country was the excitement beside which all others paled.

The way they were moving was interesting in itself. First the big van had left early that morning with all the furniture, then the brand-new secondhand car with Mother and Father and Deborah who was the baby in the front seat, and all the suitcases piled in back. There were lots of suitcases, and that was why James and Laura had to come on the train.

“And which of us will get there first,” Father had said, “is in the lap of providence. You’ve got your key.”

Standing on the sidewalk in front of the apartment house and waving after the disappearing car, Laura had felt suddenly very empty and deserted, but only for a moment.

“Don’t look back,” James had counseled wisely, hailing a taxi in an offhand and independent manner. And then came Grand Central Station and crowds, and the fast express train, and changing at Stamford, which was in Connecticut but didn’t look like country at all, and now here they were on the last lap of the journey that was to bring them to their first sight of the red house.

All Laura’s friends thought she was perfectly foolhardy to be moving off to the country without looking at the house first, but Laura had wanted it that way.

After their first weekend of scouring the countryside with their parents, she and James had decided that house-hunting was not for them. “The trouble is,” said Laura, “we fall in love with each new place, and then there’s always something wrong with it, and we don’t take it, and we’re left wondering what would have happened if we had! We can’t go round all our lives being homesick for a lot of houses we’ve never lived in! It’s too much to expect.” And James had agreed.

“Remember the wonderful big yellow house with the lake?” said Laura to James now, as they rode along.

“It had termites,” said James.

“And the one that used to be a barn, with the three-story living room?”

“The porch sagged,” said James, “and there was a dead fox in the auxiliary well.”

“Do you suppose this one’ll be even half as good?”

“It’s older. It was built way back before the Revolution. George Washington had his Connecticut headquarters there,” James reminded her.

“It must be full of history,” Laura agreed.

“Or magic. Like Seekings House, where Kay Harker lived,” said Laura, looking down at her train book, which was The Midnight Folk, that wonderful story by Mr. John Masefield. She was rereading it for the third time.

“No.” James shook his head regretfully. “I guess that would be too much to expect. You never hear about magic happening to anybody anymore. I guess it’s had its day.”

“This latest book by the inventive and highly literate Mr. Eager is by all odds his best. The characters . . . are so alive they seem to step right out of the pages.”  —Chicago Tribune 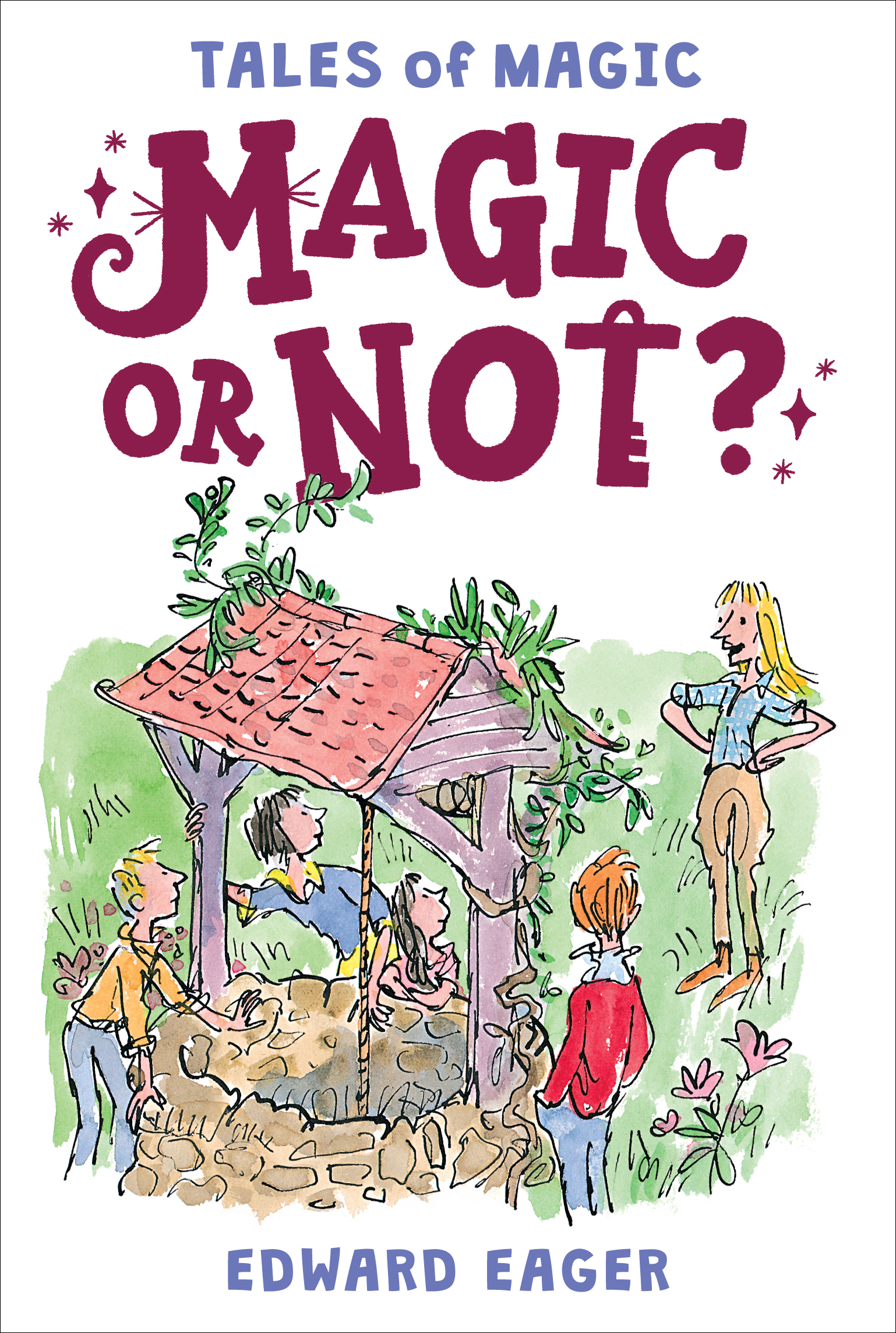