A collection of new and previously published stories by New York Times best-selling author Hugh Howey, including three set in his Wool universe

A new collection of stories, including some that have never before been seen, from the New York Times best-selling author of the Silo trilogy

Hugh Howey is known for crafting riveting and immersive page-turners of boundless imagination, spawning millions of fans worldwide, first with his best-selling novel Wool, and then with other enthralling works such as Sand and Beacon 23.

Now comes Machine Learning, an impressive collection of Howey’s science fiction and fantasy short fiction, including three stories set in the world of Wool, two never-before-published tales written exclusively for this volume, and fifteen additional stories collected here for the first time. These stories explore everything from artificial intelligence to parallel universes to video games, and each story is accompanied by an author’s note exploring the background and genesis of each story.

Howey’s incisive mind makes Machine Learning: New and Collected Stories a compulsively readable and thought-provoking selection of short works—from a modern master at the top of his game.

HUGH HOWEY is the New York Times and USA Today best-selling author of Wool, Shift, Dust, Beacon 23, Sand, and Machine Learning. His works have been translated into more than forty languages and have sold more than three million copies worldwide. Wool is currently in development for television at AMC, and Sand is in development at Amazon. Hugh lives aboard Wayfinder, a fifty-foot catamaran that he is sailing around the world.

It was difficult to sleep at night, wishing good men dead. This was but one of the hurtful things I felt in my bones and wished I could ignore. It was an ugly truth waving its arms that I turned my gaze from, that I didn’t like to admit even to myself. But while my bag warmed me with the last of its power and my breath spilled out in white plumes toward the roof of our tent, while the flicker of a whisper stove melted snow for midnight tea, I lay in that dead zone above sixty thousand feet and hoped not just for the failure of those above me, but that no man summit and live to tell the tale. Not before I had my chance.

It was a shameful admission, one I nearly raised with Hanson, my tent mate, to see in the wrinkles of his snow-beat face whether this was a guilt shared. I suspected it was. In the mess tents and around the yellow craters we dubbed latrines, the look among us was that only one would be remembered. The rest would die alone in the snow or live a long life forgotten — and not one of us would’ve been able to explain to a child the difference. Frozen to death by altitude or by time was all the same. The truth was this: History remembers the first, and only the first. These are the creeping and eternal glaciers, the names etched across all time like scars in granite cliffs. Those who came after were the inch or two of snowdrift that would melt in due time. They would trickle, forgotten, into the pores of the earth, be swallowed, and melt snow at the feet of other forgotten men.

It was a quarter past Eno’s midnight and time to get up. If Shubert and Humphries were to make it to the top, they likely would’ve by now. If any of their gear still worked, they would be radioing in their victory, taking the first pictures of starlit peaks wrinkling far past the limits of sight. By now, they would know how many fingers and toes it cost them, how much oxygen was left in their tanks, whether or not they would live to speak of the mountain’s conquest.

The faint odor of tea penetrated my dark thoughts. It must’ve been a potent brew to smell it at all. We had already scaled beyond the heights where taste and scent fade to oblivion. One had to remind himself to eat and drink, for the stomach is one of those organs that know when to quit. It is the first, in fact, to go. The mind of the climber is the last.

Hanson brought me tea. I wormed a single arm out into the cold, though my heating bag had become a feeble thing. I did not want to lose what little it held. I coughed into my fist, that persistent cough of the dead zone, and accepted the steaming mug.

There were no words spoken as we forced ourselves to drink. Every twitch was an effort at those altitudes. We were sleeping higher than all the fabled peaks of Cirrus VII. Our fourth camp along the Slopeson Ridge, at 42,880 feet, was higher than any speck of dirt on Hanson’s home planet. And when we arrived on this wasteland of a frozen ball, out here in a corner of the galaxy where men go either to not be found or to be remembered for all time, we set up a base camp very near to the highest peak of the place I grew up: Earth. Where men were first born and first began to scale to deadly heights.

I sipped my tea, burning my numb lips, and told myself it would be an Earth-born who scaled Mount Mallory first. This was a distasteful idea that I and many others were willing to share. The secret I kept to myself was that others could die if they dared climb her before me.

Two other private teams were making a go of it that season. Government expeditions and collectives of alpine clubs had given up decades ago. They now watched as men such as I took leave of our day jobs and, with borrowed funds and the best of gear and medicine at hand, set out to prove what was possible.

The window of opportunity for a summit was but a bare sliver of a crack. Half a day at most when the fearful winds of that dizzy world slowed to a manageable gale and before the monsoons buried the rock under drifts a hundred meters deep. The problem, of course, was in not knowing when that half-day would fall. Every climber across thirteen worlds studied the weather charts like day traders. As the season neared, predictions were logged on the net, men in their warm homes with their appetites intact and the feeling still in their fingers and toes would make guesses, watch reports from the satellites left behind by those government expeditions, and make bold claims.

I had been one of those prognosticators until recently. But now, after spending a night at camp 7 beneath the Khimer Ridge, I felt as though I had graduated to one who could sneer at the antics of those at lesser heights. By dint of my travel between the stars and my arduous climb thus far, I was now an expert. It lent Hanson and me the illusion that our guess was far more refined than the others.

Or perhaps it was the lack of oxygen that made us crazy this way. In the middle of that terrible night, rather than spend my last morning thinking of my wife and kids or dwelling further on the debts incurred to travel to frontier stars and hike up a murderous peak, I thought of all my fellow climbers who were safely ensconced in their homes as they followed our every move.

Right now, they likely followed Shubert and Humphries, two strong climbers who had knocked out all else the galaxy had to offer. They would also be keeping an eye on Hanson and me. And then there was the pairing of Ziba and Cardhil, who were also making a bid that year.

Ziba was an enigma of a climber, a small woman who looked far too frail in her heat suit and mask. When first I saw her navigating the Lower Collum Ice Falls above base camp, I mistook her oxygen tanks for double-aughts in size, such as they dwarfed her frame. The consensus was that there was little to fear in her attempt that year. I had done some digging before my uplink succumbed to the cold and read that Ziba had knocked out the peaks of her home planet, none of which top thirty thousand feet, but she had at least done them in style. No oxygen and swiftly, one of those modern climbers. It had been a private joy to watch her give in to the true mountaineering methods necessary on Mallory’s great face. The methodical lift of crampons, the bulging tanks of air, the fogging and frosted masks. These were the ways of the true climber. Mallory is an instructor to all, and Ziba did not seem too full of herself to submit, learn, and adapt.

Cardhil, I figured, was the great unknown. Ziba had chosen an odd tent mate in the android. And if it were a manchine that was the first to summit great Mallory, the consensus across the alpine forums was that nothing would have occurred at all. There would not even be an accomplishment to asterisk. And anyway, I had sent notes a week ago to an old climbing buddy, telling him not to worry. The cold was worse on the manchine’s joints than our own. Hanson and I had left camp 6 while Ziba was chipping away at Cardhil’s frozen ankles. And please don’t tell me that a man’s memories counted for the man himself, that the android lived because he remembered living. I have had many a conversation with Cardhil around base camp and watched him with the Sherpas. He is no different than the droid who cleans my pool or walks my dog. A clever approximation, but with movements too precise, too clean, to pass for human. The other day, Hanson nudged me in time to turn and catch Cardhil taking a great spill on the east face. The way he did even this was unnatural. Supremely calm and without a whimper, the manchine had

"Howey’s writing is taut and immersive, and his characters’ perspectives will fascinate, no matter how inhuman they are."--Publishers Weekly

"Each story is followed by insightful author's notes. A thoroughly engaging collection with a dark sense of humor but its finger always on the pulse of genuine human concerns."--Kirkus 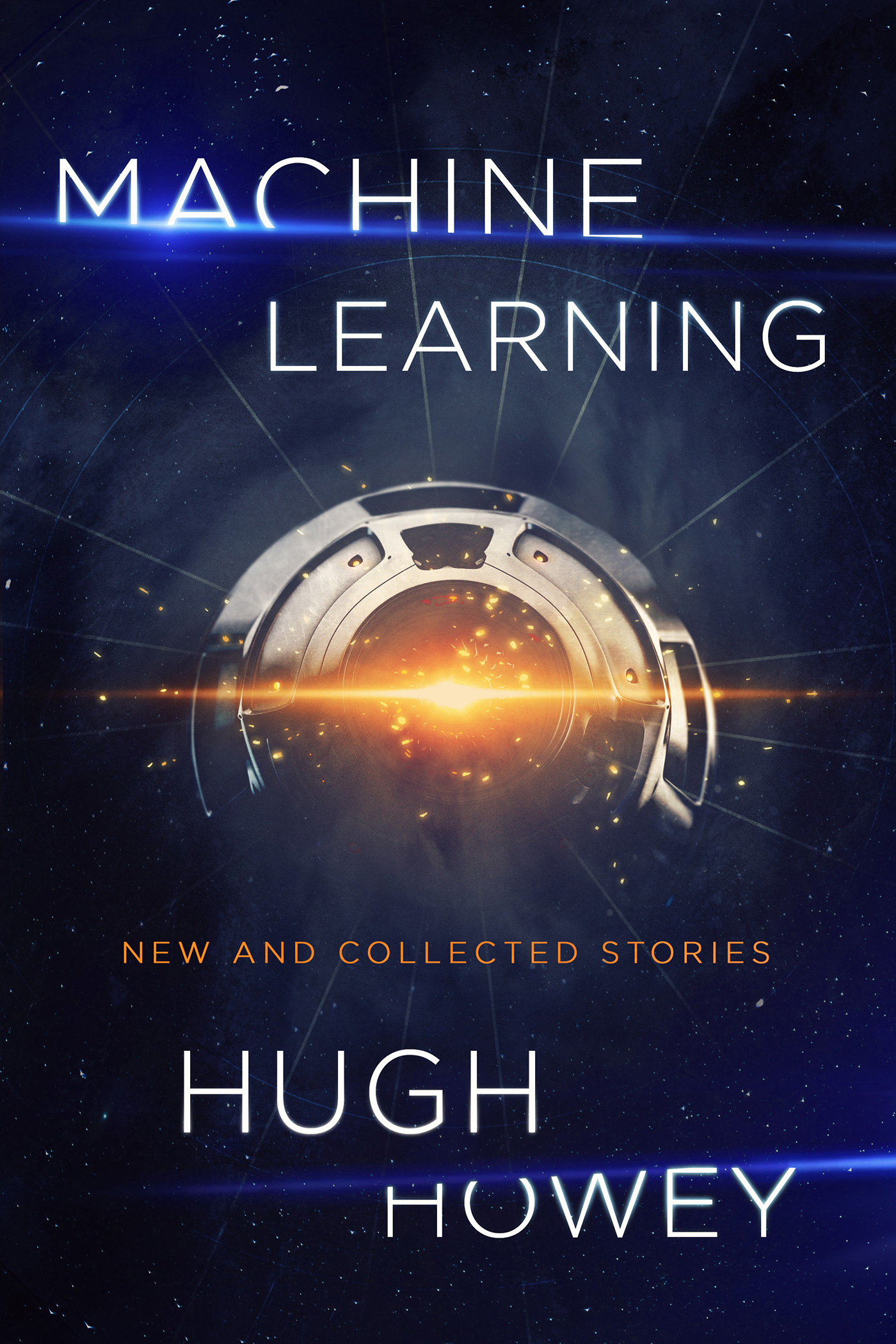