In the second installment in the Robots Rule series, George is thrilled to score his dream job at Tinker Tech Industries. But he and his best pal Jackbot soon realize that something does not compute. Gizmos and gadgets combine with mystery-by-the-megabyte in this rollicking robot adventure for readers ages 9 to 12.

Having defeated the rampaging robots in The Junkyard Bot, George is thrilled to score his dream internship at Tinker Tech. But he and his best pal, Jackbot, realize that something does not compute when a dangerous new invention threatens Terabyte Heights. As he and his friends search for answers, they uncover secrets about George’s past that may change his life . . . forever.

Robots, engineering, and buddy stories have never been this cool, or this much fun. Perfect for restless readers who crave gizmos, gadgets, and mystery by the megabyte! Visit www.robotsrulebooks.com to learn more.

About the author
C. J. Richards

C. J. Richards has loved tinkering with gadgets since he was a little boy. He remembers fondly the time he accidentally blew up his father’s radio after some experimental rewiring. Mr. Richards lives with his wife, his cat, and his eight televisions.

Goro Fujita has been fascinated by drawing since childhood. He was born in Japan and moved with his family to Germany when he was three years old. He now lives in California, where he works as an illustrator and visual development artist on feature films and TV commercials.

The pickup truck lurched sideways as Uncle Otto jerked the wheel, throwing George against the door.

“Out of the way, you metal moron!” Otto yelled, as they narrowly missed a mail-bot on the sidewalk.

“Look out!” George shouted. A robot-driven bus was heading straight toward them, its electronic horn blaring.

Otto braked hard with a screech of rubber, then swerved the truck back into its lane.

“That was close!” George said from the passenger seat, his heart pounding.

“Lucky for us I have good reflexes,” Otto said. He was wearing his usual dingy work shirt and jeans, which were dotted with engine-oil stains. “With all these robot drivers nowadays, sometimes I feel like I’m the only one on the road with a real brain in my head.”

“What was that, tin man?” growled Otto.

“Nothing,” George said quickly. If Otto and Jackbot started going at it, they’d never get where they were going. “But have you ever considered that maybe it’s time we got a smartcar too? Everyone else has one.”

Otto gripped the steering wheel until his knuckles went white. “You think I’d let a bunch of wires and batteries drive me around?” he said. “Ha! Not in a million years. Trust me, George. Robots aren’t the answer to every problem. I remember the days before all these tech geeks showed up—back when Terabyte Heights was just a little town called Termite Heights. Everything was so peaceful then . . .”

As Otto droned on about the joys of pre-robot life, George stared out the window and watched the town flash by. Goosebumps rose along his arms as he realized they were nearly at TinkerTech Headquarters. It was the first day of George’s apprenticeship, and he still couldn’t quite believe it was happening. All his life he’d dreamed of working in the cutting-edge robotics workshop there, and today his dream was coming true. He’d be partnering with the greatest technological minds in the country, helping design robots that could think for themselves—just like he had with Jackbot.

Plus, he’d be away from school for a while, which meant no more run-ins with his enemy Patricia Volt and her league of supersnobs. She’d never quite forgiven him for driving the garbage truck that demolished her house, and George was convinced that she was still plotting revenge.

“. . . Used to be you could take out your own trash without some recycling robot giving you a lecture,” Otto was saying. “You could roast marshmallows on an open fire without one of those panicky metal fire marshals coming along with a fire extinguisher . . .”

A traffic-bot strode into the road ahead, holding out its metal hand. Its eyes flashed from green to yellow. But instead of slowing down, Otto pressed his foot on the gas and the truck sped forward.

“I’m getting you to TinkerTech on time if it kills me!” Otto said.

The traffic-bot leaped out of the way as they surged by, shouting “VIOLATION!” and spewing pink tickets from its mouth.

“Oh, relax, George,” Otto said. “I haven’t had one accident in thirty years.”

“Well, there’s a first time for everything,” Jackbot said.

Thankfully, Otto did stop at the next light, but only because there was a traffic jam ahead and he didn’t have much of a choice. George checked his watch. Despite scolding Otto for his dangerous driving, he really didn’t want to be late. They were stopped next to a 3D hologram ad of a young woman in a business suit, with huge shiny eyes and a small white bud tucked into her ear. She beamed, displaying dazzling teeth, and said, “I’m connected. Are you?”

Next to her, a slogan hung in the air: “IT’S MODEST. IT’S MODERN. IT’S MOD™, TINKERTECH’S NEWEST INNOVATION. GET CONNECTED TODAY!”

“Wow,” said George, staring dreamily at the ad. He’d been hearing about the MOD for months—maybe he’d get to try one out before it went on sale!

The traffic started rolling again. “Not just any new gizmo,” said George. “It’s probably the coolest thing since the microchip. MOD stands for Multifunctional Ocular Device—it’s a wireless eye and earpiece combo that allows the wearer to access data just by thinking of it. It’s like your whole body becomes one big computer, with your eyes as the screen and your brain—”

“My brain wouldn’t touch that thing with a ten-foot pole!” said Otto. “It would probably fry me like an egg. If you want a burnt-up brain, my boy, that’s your choice—but you can leave me out of it.”

Whatever his uncle’s opinion on the topic, there was no way George was going to get left behind. He’d been saving from his weekend work at Otto’s junkyard, and would be lining up with everyone else to buy his MOD in a few days.

How could he resist? The MOD was revolutionary. The user wore what appeared to be a special pair of contact lenses but was actually a tiny screen implanted with nanotech circuitry. With just the power of thought, information could either be displayed visually or relayed through the earpiece. It was the gadget to end all gadgets. And fried-egg brain or not, George was getting one.

A buzz came from George’s pocket. He pulled out his battered old smartphone that Otto had finally gotten for him and saw a picture of Anne on the screen, with her white-blond hair and blue eyes. She was smiling and giving him a thumbs-up. “Knock ’em dead at TinkerTech, George!” the text underneath said. George smiled. Not only was it great to have a friend who wasn’t composed of screws and bolts, but being pals with the daughter of Professor Droid, the president of TinkerTech, had its perks too.

Finally, Otto pulled up to the soaring glass and steel offices of TinkerTech HQ—and not a moment too soon. The truck belched a cloud of black smoke, which drew hostile glances from the workers who were heading into the building. “Mark my words, George,” said Otto. “The machines are taking over.”

George sighed and unbuckled his seat belt. “Oh, don’t be so paranoid,” he said.

"Fans of the first book will uncover more of the same in the sequel. It is also well-suited for young readers looking for an accessible introduction to the science-fiction genre. More entry-level fun for the robot-loving set."

"Silly fun and high-tech intrigue on every page." 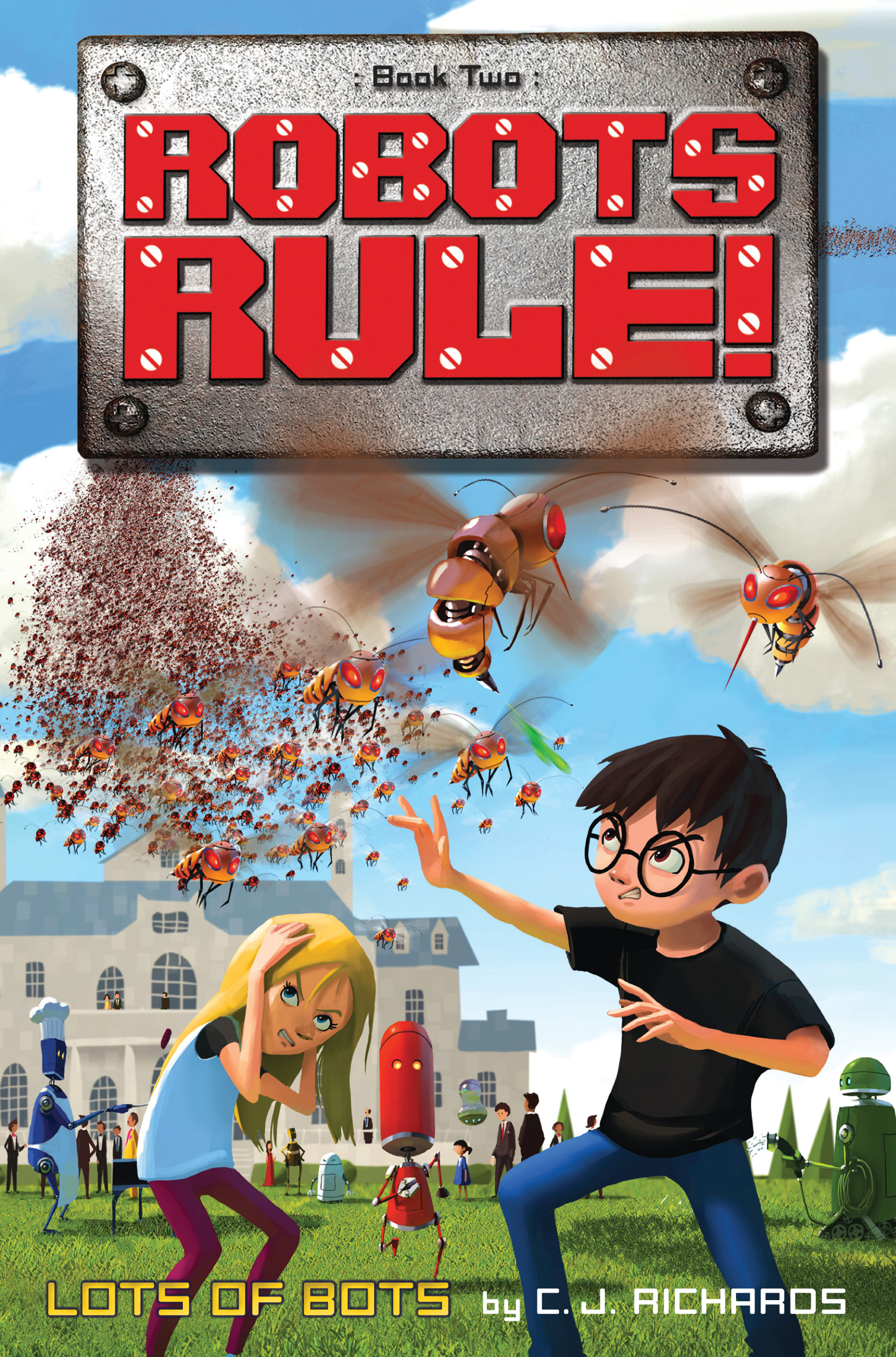