Looking for Spinoza: Joy, Sorrow, and the Feeling Brain

A "clear, accessbile" investigation into the philosophical and scientific foundations of human life, from one of the world's leading neuroscientists (San Francisco Chronicle).

A "clear, accessbile" investigation into the philosophical and scientific foundations of human life, from one of the world's leading neuroscientists (San Francisco Chronicle).

Joy, sorrow, jealousy, and awe??—??these and other feelings are the stuff of our daily lives. In the seventeenth century, the philosopher Spinoza devoted much of his life's work examining how these emotions supported human survival, yet hundreds of years later the biological roots of what we feel remain a mystery.

Antonio Damasio??—??whose earlier books explore rational behavior and the notion of the self??—??rediscovers a man whose work ran counter to all the thinking of his day, pairing Spinoza's insights with his own innovative scientific research to help us understand what we're made of, and what we're here for.

About the author
Antonio Damasio

ANTONIO DAMASIO is the David Dornsife Professor of Neuroscience and Director of the Brain and Creativity Institute at the University of Southern California. He is also an adjunct professor at the Salk Institute for Biological Studies in La Jolla. He is a member of both the Institute of Medicine of the National Academy of Sciences and the American Academy of Arts and Sciences. Descartes' Error was an international bestseller. The Feeling of What Happens has been translated into seventeen languages.

Feelings of pain or pleasure or some quality in between are the bedrock of our minds. We often fail to notice this simple reality because the mental images of the objects and events that surround us, along with the images of the words and sentences that describe them, use up so much of our overburdened attention. But there they are, feelings of myriad emotions and related states, the continuous musical line of our minds, the unstoppable humming of the most universal of melodies that only dies down when we go to sleep, a humming that turns into all-out singing when we are occupied by joy, or a mournful requiem when sorrow takes over.*

Given the ubiquity of feelings, one would have thought that their science would have been elucidated long ago-what feelings are, how they work, what they mean-but that is hardly the case. Of all the mental phenomena we can describe, feelings and their essential ingredients-pain and pleasure-are the least understood in biological and specifically neurobiological terms. This is all the more puzzling considering that advanced societies cultivate feelings shamelessly and dedicate so many resources and efforts to manipulating those feelings with alcohol, drugs of abuse, medical drugs, food, real sex, virtual sex, all manner of feel-good consumption, and all manner of feel-good social and religious practices. We doctor our feelings with pills, drinks, health spas, workouts, and spiritual exercises, but neither the public nor science have yet come to grips with what feelings are, biologically speaking.

I am not really surprised at this state of affairs, considering what I grew up believing about feelings. Most of it simply was not true. For example, I thought that feelings were impossible to define with specificity, unlike objects you could see, hear, or touch. Unlike those concrete entities, feelings were intangible. When I started musing about how the brain managed to create the mind, I accepted the established advice that feelings were out of the scientific picture. One could study how the brain makes us move. One could study sensory processes, visual and otherwise, and understand how thoughts are put together. One could study how the brain learns and memorizes thoughts. One could even study the emotional reactions with which we respond to varied objects and events. But feelings-which can be distinguished from emotions, as we shall see in the next chapter-remained elusive. Feelings were to stay forever mysterious. They were private and inaccessible. It was not possible to explain how feelings happened or where they happened. One simply could not get "behind" feelings.

As was the case with consciousness, feelings were beyond the bounds of science, thrown outside the door not just by the naysayers who worry that anything mental might actually be explained by neuroscience, but by card-carrying neuroscientists themselves, proclaiming allegedly insurmountable limitations. My own willingness to accept this belief as fact is evidenced by the many years I spent studying anything but feelings. It took me awhile to see the degree to which the injunction was unjustified and to realize that the neurobiology of feelings was no less viable than the neurobiology of vision or memory. But eventually I did, mostly, as it turns out, because I was confronted by the reality of neurological patients whose symptoms literally forced me to investigate their conditions.

Imagine, for example, meeting someone who, as a result of damage to a certain location of his brain, became unable to feel compassion or embarrassment-when compassion or embarrassment were due-yet could feel happy, or sad, or fearful just as normally as before brain disease had set in. Would that not give you pause? Or picture a person who, as a result of damage located elsewhere in the brain, became unable to experience fear when fear was the appropriate reaction to the situation and yet still could feel compassion. The cruelty of neurological disease may be a bottomless pit for its victims-the patients and those of us who are called to watch. But the scalpel of disease also is responsible for its single redeeming feature: By teasing apart the normal operations of the human brain, often with uncanny precision, neurological disease provides a unique entry into the fortified citadel of the human brain and mind.

Reflection on the situation of these patients and of others with comparable conditions raised intriguing hypotheses. First, individual feelings could be prevented through damage to a discrete part of the brain; the loss of a specific sector of brain circuitry brought with it the loss of a specific kind of mental event. Second, it seemed clear that different brain systems controlled different feelings; damage to one area of the brain anatomy did not cause all types of feelings to disappear at once. Third, and most surprising, when patients lost the ability to express a certain emotion, they also lost the ability to experience the corresponding feeling. But the opposite was not true: Some patients who lost their ability to experience certain feelings still could express the corresponding emotions. Could it be that while emotion and feeling were twins, emotion was born first and feeling second, with feeling forever following emotion like a shadow? In spite of their close kinship and seeming simultaneity, it seemed that emotion preceded feeling. Knowledge of this specific relationship, as we shall see, provided a window into the investigation of feelings.

Such hypotheses could be tested with the help of scanning techniques that allow us to create images of the anatomy and activity of the human brain. Step by step, initially in patients and then in both patients and people without neurological disease, my colleagues and I began to map the geography of the feeling brain. We aimed at elucidating the web of mechanisms that allow our thoughts to trigger emotional states and engender feelings.1

Emotion and feeling played an important but very different part in two of my previous books. Descartes' Error addressed the role of emotion and feeling in decision-making. The Feeling of What Happens outlined the role of emotion and feeling in the construction of the self. In the present book, however, the focus is on feelings themselves, what they are and what they provide. Most of the evidence I discuss was not available when I wrote the previous books, and a more solid platform for the understanding of feelings has now emerged. The main purpose of this book, then, is to present a progress report on the nature and human significance of feelings and related phenomena, as I see them now, as neurologist, neuroscientist, and regular user.

The gist of my current view is that feelings are the expression of human flourishing or human distress, as they occur in mind and body. Feelings are not a mere decoration added on to the emotions, something one might keep or discard. Feelings can be and often are revelations of the state of life within the entire organism-a lifting of the veil in the literal sense of the term. Life being a high-wire act, most feelings are expressions of the struggle for balance, ideas of the exquisite adjustments and corrections without which, one mistake too many, the whole act collapses. If anything in our existence can be revelatory of our simultaneous smallness and greatness, feelings are.

How that revelation comes to mind is itself beginning to be revealed. The brain uses a number of dedicated regions working in concert to portray myriad aspects of the body's activities in the form of neural maps. This portrait is a composite, an ever-changing picture of life on the fly. The chemical and neural channels that bring into the brain the signals with which this life portrait can be painted are just as dedicated as the canvas that receives them....

PRAISE FOR LOOKING FOR SPINOZA

"Clear, accessible and at times eloquent . . . Nothing less than a new vision of the human soul."-San Francisco Chronicle 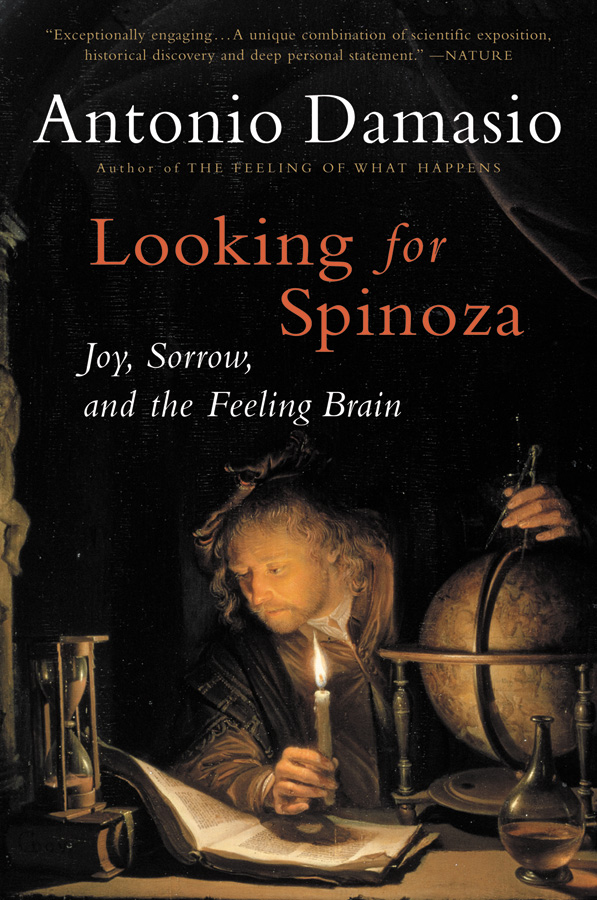