Lonelyhearts: The Screwball World of Nathanael West and Eileen McKenney

From the author of the acclaimed BOBBED HAIR AND BATHTUB GIN comes a joint biography of the author of The Day of the Locust and his wife, the Eileen of My Sister Eileen, set against the world of New York writers and Hollywood screenwriters in the 1930s.

Nathanael West was a comic artist whose insight into the brutalities and absurdities of modern life proved prophetic. He is famous for two masterpieces, Miss Lonelyhearts and the most penetrating novel ever written about Hollywood, The Day of the Locust. Eileen McKenney, accidental muse and literary heroine, fled Cleveland in search of romance and adventure, inspiring her sister’s humorous stories, My Sister Eileen, which led to stage, film, and television adaptations.

Until their tragic deaths in 1940, husband and wife were intimate with many of the literary, theatrical, and movie notables of the era, and in this dual biography, they provide a one-of-a-kind lens into a world that continues to capture artists’ imaginations. With trenchant insight and erudite charm, acclaimed biographer Marion Meade restores the star-crossed lovers to their rightful places in the rich cultural tapestry of interwar America and paints a lively tableau of one of the country’s most engrossing eras.

About the author
Marion Meade

MARION MEADE is the author of Dorothy Parker: What Fresh Hell Is This? and Bobbed Hair and Bathtub Gin: Writers Running Wild in the Twenties. She has also written biographies of Woody Allen, Buster Keaton, Eleanor of Aquitaine, Madame Blavatsky, and Victoria Woodhull, as well as two novels about medieval France.

THE LOBBY OF the Kenmore Hall Hotel was deserted at three in the morning. Its skylit lounge was shrouded in pearl shadows, the passenger lift stood wearily at attention, the night porter dozed in the vestibule. Sitting behind the front desk was the assistant manager, a long-legged youth of twenty-six in a Brooks Brothers, three-button wool suit. On this night he bent over the keyboard of a typewriter, pounding out a letter to his girlfriend, Beatrice, in Paris and puffing on a cigarette. “Nothing happens,” he wrote.

Kenmore Hall, a pretty redbrick residence hotel not yet two years old, was home to hundreds of young professionals who booked by the week or month. Prized for its desirable address near Gramercy Park, its reasonable rates, and amenities such as a pool and roof garden, the place always had a waiting list for vacancies, sometimes a long one. Nat was supposed to remember guests’ names, but he happened to know a great deal more, and not just gossip either. He knew exactly when they awoke and when they left for their offices, who got mail and from whom, what time they went to bed, and which ones couldn’t sleep, because the bleary-eyed were known to shuffle down to the lobby and fret about it, as if he could do anything. There were friendly women who found pretexts for inviting him to their rooms. To all proposals he would beg off with an easy smile and a general refusal worded to give no offense. He took fewer pains with the prostitutes, alone or in pairs, who constantly tried to sneak past the desk on their way to the elevator. Hookers—and stolen bath towels—were his biggest aggravations.

Otherwise, the position of assistant manager was not terribly taxing. Aside from charming everyone, the main requirements on the graveyard shift were staying awake and issuing orders in emergencies. Even at the best hotels, the worst things were liable to happen after midnight, and Nat had trained himself to take in stride noisy parties, fires, heart attacks, failed suicides, occasional corpses, and unscheduled checkouts of guests trying to jump their bills. As some anonymous hotelier once said, “Listen to everything and say nothing.” And so Nat had diligently learned to comport himself with a silky mixture of servility and severity.

But typically nights at Kenmore Hall were serene. From the tiled spa and pool below his feet rose the steady slapping of brilliant sapphire-colored water. Stacked on top of his head stretched the hushed building, seven hundred rooms, twenty-two stories, its long carpeted hallways mouse-quiet. He kept a room there and when nothing required his special attention he could, if he wished, slip upstairs to 207 for a short rest (but he could never close his eyes). Occasionally he invited people to drop by for a nocturnal swim. Alone, he was rarely in the mood to bother changing clothes and showering, returning to the desk with wet hair and the faint perfume of chlorine still in his nose. For a year now, he’d been saving his free time for his book.

Last winter, something like March—or maybe February—he had gone to eat at Siegel’s, a deli nestled under the Sixth Avenue elevated tracks in the Village. It was a friendly place smelling of pickles and pastrami, and Nat liked stopping there before work to meet two former classmates, Quentin Reynolds and Sidney Perelman, both of them writers and the latter his sister’s fiancé. One day Quent showed up with a handful of letters from readers of the newspaper where he was employed. Like most big papers, the Brooklyn Daily Times published an advice column, “Susan Chester Heart-to-Heart Letters,” which appeared on the women’s page, hemmed in by meat-loaf recipes and Modish Mitzi fashion cartoons. Signing theatrical pseudonyms (“Puzzled,” “Heartbroken and Blue”), the letter writers typically sought guidance on unrequited love or how to attract husbands sure to bring them lifetimes of misery.

Whether there ever had been a person named Susan Chester scarcely mattered; the Susan beat was rotated throughout the newsroom, to female and male staff alike. The only qualification for doling out advice was reasonable good sense. Not surprisingly, the assignment was viewed as an irritation, something to be endured without complaint, accompanied by prayers for speedy deliverance. Quent, keen to cover sports or straight news, was stuck with Susan for the moment. To Siegel’s he brought six letters the paper had discarded as too disturbing for its readers, thinking Sid might be inspired to do a satire on advice columns.

Midway through dinner the letters were passed around the table, but Sid handed them back with a shrug. A few showed “comic superficialities,” he told Quent, but where were the laughs? For that matter, were they true? It was hard to tell if the writers were real people. Some impressed Sid as stock characters, your average New York crackpot. What he needed were subjects lending themselves to subtle ridicule, like his lampoon of dental magazines, in which he offered a guide to performing one’s own extractions. The Dear Susan letters were quickly forgotten when the conversation shifted to more pressing matters. In recent months he and Quent had been collaborating on a humorous novel but had yet to agree on a suitable title, something catchy that might sell a million copies. Through the Fallopian Tubes on a Bicycle?

Nat, who had remained silent, began to look at the letters out of curiosity. One of them came from a woman identifying herself as Broad Shoulders, who claimed that her husband beat her and infected her with gonorrhea before abandoning her with a brood of kids. Another writer was a crippled sixteen-year-old who feared never being asked for a date. Still others described problems having to do with the evils of gin. To be sure, the situations sounded pitiful, but after a point it was really hard not to giggle.

Immediately Nat was intrigued by these freaky people who, claiming to be cheated of a normal life, kept busy reporting their sagas to anonymous editors, and to strangers who might bear witness to the ¬unfairness of their plights. How in the world did they manage to keep going, let alone write about it? Of course Sid could be right in suspecting the letters to be stunts. For all Nat knew, they came from aspiring writers in disguise, although there had to be easier ways to get ¬published.

As the men were leaving the restaurant, Nat decided to stick the letters in his pocket. It was possible that the material was wrong for satire but useful fodder for fiction. To begin with, the idea of Quent, a big guy who’d played varsity football at Brown, being shoved onto the lovelorn beat and forced to pretend he was Susan Chester, was good for a few laughs. With the addition of the crazed letter writers—a regular mulligan stew of loons, cripples, permanent deadbeats, and retards—the story became even more tempting. Imagine what complications might follow if the poor guy had to meet one of these screwy dames.

For weeks on end, Nat pondered the letters. Maybe something unpredictable could be done, perhaps a kicky cartoon story about a male advice columnist. Such an original concept would surely provide a lot of fun.

A whole year had passed since that evening at Siegel’s and he had made little progress on his story about a columnist he was calling Thomas. Later, of course, the columnist wouldn’t be called Thomas and Nat would forget he ever had writer’s block, even try to repress how he got the letters in the first place. But now he was bogged down in details... 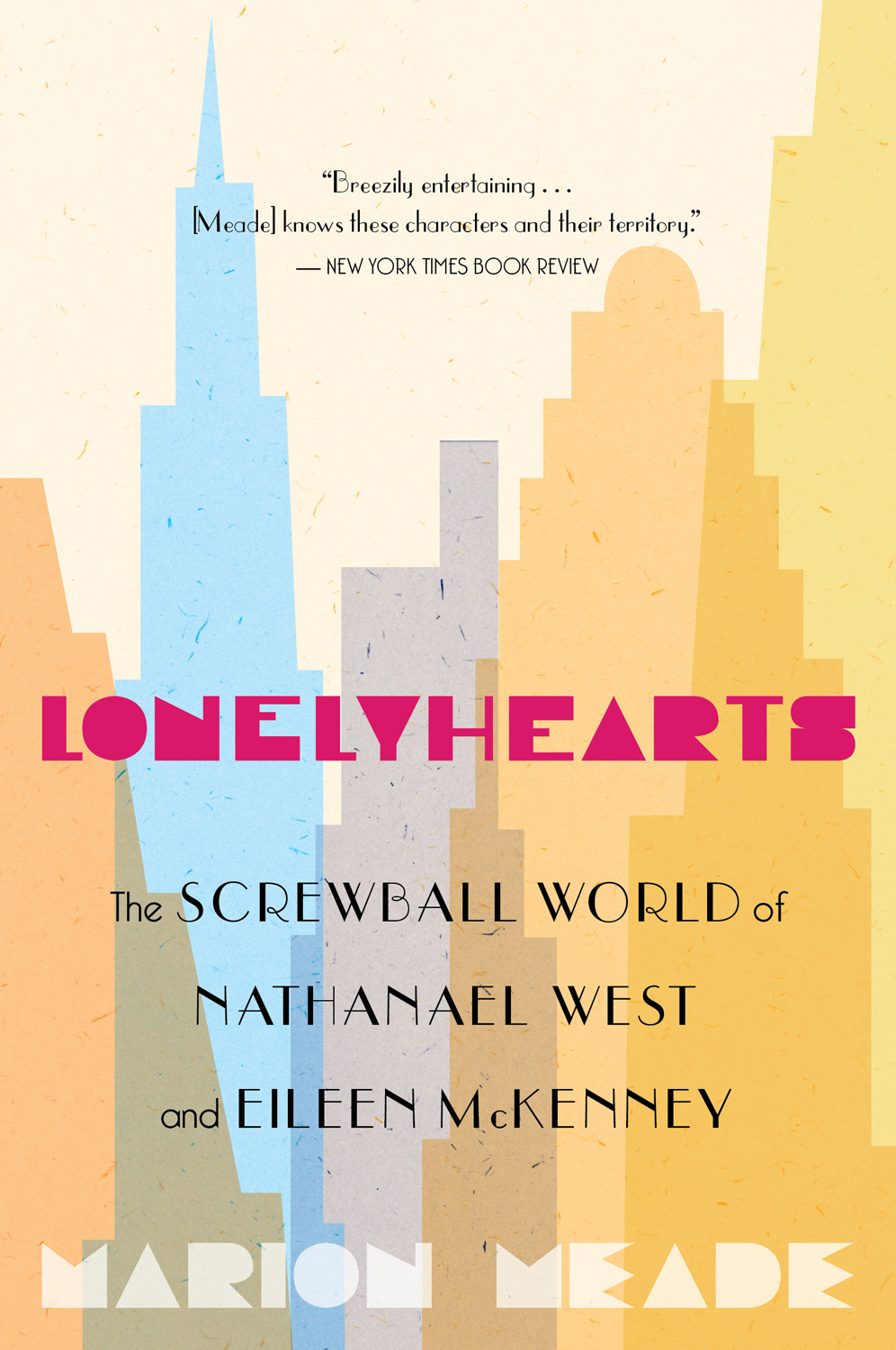