The bestselling author of Slammerkin vividly brings to life the Beau Monde of late eighteenth-century England, turning the private drama of three celebrated Londoners into a robust, full-bodied portrait of a world on the brink of revolution. In a time of looming war, of glittering spectacle and financial disasters, the wealthy liberals of the Whig Party work to topple a tyrannical prime minister and a lunatic king. Marriages and friendships stretch or break; political liaisons prove as dangerous as erotic ones; and everyone wears a mask. Will Eliza Farren, England's leading comedic actress, gain entry to that elite circle that calls itself the World? Can Lord Derby, the inventor of the horse race that bears his name, endure public mockery of his long, unconsummated courtship of the actress? Will Anne Damer, a sculptor and rumored Sapphist, be the cause of Eliza's fall from grace?

The angle from which a sculpture yields

its most pleasing and comprehensive view.

Some sculptures appear fragmentary or implausible

when seen from any angle but the primary view.

SEVERAL of our Correspondents have written to enquire exactly what is meant by that familiar phrase, the World. Allow us to reply that those who must ask the nature of the Beau Monde (alias the Quality, the Bon Ton, or simply the Ton) thereby prove themselves to be excluded from it.

This select band call themselves the World, being convinced that there is no other-or none that matters. Their number is composed of the great and grand: gentlemen and ladies of note (of family and name, of fortune and distinction, of fashion and figure). There are two points of controversy. The first, whether persons of no Breeding, who have achieved high fame and elevated station through their own merits, can be considered members of the World? The second, conversely, whether those members of the higher orders (by which we distinguish the Gentry and the Peerage) who have failed to inherit any of the fortune, elegance or other distinguished qualities of their Ancestors should be considered to have forfeited their membership? To put it in simpler terms, who is the true lady of the Beau Monde: the lovely Miss F-rr-n, whose birth is shamefully low but whose shining talents have won her unfading laurels on the stage of Dr-ry L-ne, or old Baroness Dung-Hill, who starves and mumbles in her brother's west wing and hasn't been to town for a new gown since the last Coronation?

THE THAMES WAS LOOSENING, ITS THIN SKIN OF ICE CRACKED open by thousands of small boats, as if spring were on its way. The carriage with the Derby arms gilded on the side forced its way down Whitehall through a tangle of vehicles and pedestrians. 'The traffic, these days.' The Earl of Derby sighed.

Eliza Farren leaned across her mother to pull open the blue velvet curtain. The sun splashed her face like water. 'The Richmonds must have a marvellous view, right across to St Paul's and south to Surrey.'

'Mm. I'd never choose to live anywhere but Mayfair myself,' said Derby, 'but I suppose the Duke needs to be close to Parliament.'

Only a few minutes to Richmond House, now; Eliza's stomach was as tight as a nut. Despite the fur-lined mask, her cheekbones ached with the cold; she withdrew into the hood of her cloak and her hands crept deeper into her muff. Had it been a mistake? She'd bought it only yesterday on Oxford Street; it struck her now as ludicrously large, like a fluffy, bloated dog squatting in her lap. Her mother was right that the muff was all the ton, but that didn't mean it would please the people Eliza was going to meet today. How fine the line between fashion and vulgarity and how easy to stray across it. Perhaps she should leave the thing in the carriage.

'Of course, the one I've been longing to have you meet is the Duchess's half-sister, Mrs Damer,' said Derby. 'She's an original; reads Latin better than most of us Etonians. Her parents were enlightened and hired the best of tutors for the girls. I've known Anne Damer all my life and never experienced a moment's tedium in her company.'

On Eliza's other side her mother pressed her lined face to the glass, then recoiled from its bite. The women's feet sat together on the pewter warmer; the daughter's in pointed yellow silks, the mother's in brown leather. Over the years, Eliza had pressed some recently fashionable skirts and bodices on Mrs Farren, calling them cast-offs, but she'd never been able to persuade her to give up her boots. Eliza untied her mask now, tapped her mother's wrist and mouthed the word mirror. Mrs Farren fished it out of her skirts, as blank-faced as a pickpocket. Head turned away from Derby, Eliza checked her face in the small oval of glass. Had she rouged a trifle too high for three o'clock? The handkerchief was ready in her mother's hand. Eliza gave each cheek a quick wipe.

Her stomach made a discreet grumble; she'd had nothing since her morning cup of chocolate, though her mother had brought up toast, devilled eggs and cold beef on a tray. Eliza, who had the benefit of her mother's constant service and company, often reminded herself to be grateful. Mrs Farren had seen two daughters in the grave already; fifteen years ago she'd thrown in her lot with Eliza, the one with a chance of making the family's fortune. Peggy, the other surviving daughter and a toiling actress up in York, quite understood.

Derby was still singing the praises of the Honourable Mrs Anne Seymour Conway Damer. 'They say she's the first female ever to take up sculpture in a serious way. Did you see her gorgeous spaniels in the last Exhibition? You're both such geniuses, I'm rather hoping you might become great friends.'

Eliza smiled, doubting it. She'd always been too busy for intimacy. Besides, she wasn't driving to Richmond House to make friends, exactly, but to step into a magic circle of protection. To spin herself a tough and glittering web.

Today was work, though the kind for which it was impossible to name a fee. In their initial interview the Duke of Richmond had murmured something about a recompense for Miss Farren's expertise, for the great deal of time she would be missing from Drury Lane. But Eliza's instincts hadn't let her down; she'd looked mildly offended and changed the subject. This had clearly gratified the Duke-a big spender with a frugal streak. So today she would step over the threshold of Richmond House not as a hired theatre manager but as a lady; she could mix with these titles and Honourables on equal terms, knowing that she hadn't been paid, and that they would know it too. Derby hadn't mentioned the matter-money was taboo between them-but she guessed he would be pleased.

Over the years she'd got to know some of the Earl's more easygoing friends-Party men like Fox and drinking companions from Brooks's Club-but the ladies were a different matter. When the very word actress still carried murky associations, how was someone who earned her living on the stage to shake them off? The thought caused Eliza a prickle of something like shame, which was ridiculous; wasn't she proud of having clawed her way up from her father's strolling troupe to reign as one of the three Queens of Drury Lane? The problem was her colleagues, that whole slipshod line of them stretching back more than a century to Nelly Gwyn.

Take Mrs Robinson, for instance, who rode around town in her own carriage with an invented coat of arms on it these days; when the Prince of Wales had offered an annuity of £500 a year, hadn't she given up the stage as quick as a blink, as if she'd only chosen it in the first place as a vast shop window where she could show off her goods to the bidders? And even more genuine talents, like Mrs Jordan-much as Eliza disliked her rival, she had to grant that the woman knew how to deliver a line-Dora Jordan, too, lived with a man who enjoyed only the courtesy title of husband. Actresses, apart from the odd drab wife or spinster-and, of course, the sternly virtuous Mrs Siddons, Queen of Tragedy-all had keepers; it was the done thing.

Eliza's objection wasn't a moral one. She rarely concerned herself with the state of her soul, or anyone else's, but what did matter to her was her dignity. She knew she was widely respected for her character as well as her professional talents; she'd carved herself a place in London society with considerable effort and she didn't mean to lose it.

This winter at last the Richmond House theatricals seemed to present the perfect opportunity for Derby to introduce Eliza to some of his oldest connections, letting her penetrate a closed circle of the well-born and well-bred. Everything depended on whether she could char...

"Mesmerizing. With the French Revolution raging in the background, Donoghue has lighted on another terrific story, and she pulls off a dazzling feat of choreography."--Julia Livshin, The Washington Post Book World

"Few will be able to put it down before its enthralling tales end."--Chicago Tribune 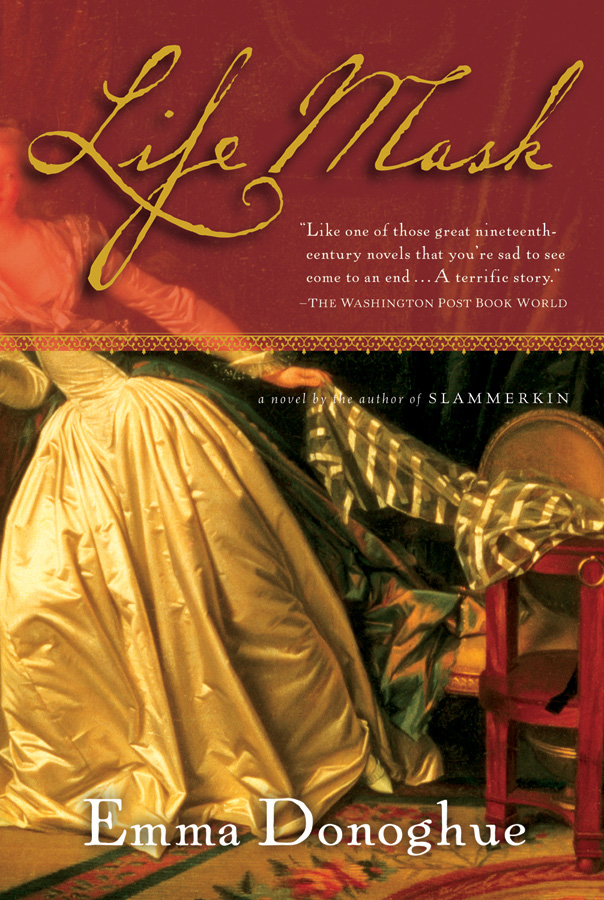