LANDING is an old-fashioned love story set in the early twenty-first century, a dark comedy about the peculiar pleasures and sorrows of keeping up long-distance relationships by plane, phone and Internet. Síle (pronounced like Sheila), an Irishwoman with an Indian mother, is a stylish citizen of the new (expensive, stressful, pomo) Dublin. A veteran flight attendant at 40, she is getting itchy in her career as much as in her domestic life. Jude, a 25-year-old archivist, stubbornly attached to the tiny town of Ireland, Ontario, has never been on a plane before. Two worlds touch and snag at Heathrow Airport on New Year’s Day, and over the course of a year, Jude’s and Síle’s lives, and those of their friends and families, will be drawn into a new, shaky orbit. The local collides with the eclectic, the historical with the global. LANDING is an allusive, sparkling, dialogue-based story about some of the biggest questions: Which things about you make you you? Does where you live matter more than who you live with? What would you give up for love, and would you be an idiot to?

Since the lovers are both women, it could be called a lesbian novel, but a post-closet one, which addresses its insights and jokes to the widest readership.

A delightful, old-fashioned love story with a uniquely twenty-first-century twist, Landing is a romantic comedy that explores the pleasures and sorrows of long-distance relationships—the kind millions of us now maintain mostly by plane, phone, and Internet.

Síle is a stylish citizen of the new Dublin, a veteran flight attendant who’s traveled the world. Jude is a twenty-five-year-old archivist, stubbornly attached to the tiny town of Ireland, Ontario, in which she was born and raised. On her first plane trip, Jude’s and Síle’s worlds touch and snag at Heathrow Airport. In the course of the next year, their lives, and those of their friends and families, will be drawn into a new, shaky orbit.

This sparkling, lively story explores age-old questions: Does where you live matter more than who you live with? What would you give up for love, and would you be a fool to do so?

DISORIENTATION (from French, désorienter, to turn from the east).

(1) Loss of one’s sense of position or direction.

Later on, Jude Turner would look back on December thirty-first as the last morning her life had been firm, graspable, all in one piece.

She’d been sleeping naked and dreamless. She woke at six, as always, in the house in Ireland, Ontario, where she’d been born; she didn’t own an alarm clock. In her old robe she gave her narrow face the briefest of glances in the mirror as she splashed it with cold water, damped down her hair, reached for her black rectangular glasses. The third and eighth stairs groaned under her feet, and the stove was almost out; she wedged logs into the bed of flushed ash. She drank her coffee black from a blue mug she’d made in second grade.

As Jude drew on her second cigarette it was beginning to get light. She watched the backyard through a portcullis of two-foot icicles: Were those fresh raccoon tracks? Soon she’d shovel the driveway, then the Petersons’ next door. The neighbour on the other side was Bub, a cryptic turkey plucker with a huge mustache. Usually her mother would be down by now, hair in curlers, but since Boxing Day, Rachel Turner had been away at her sister’s in England. The silence trickled like oil into Jude’s ears.

She’d walk the three blocks to the museum by seven so she could get some real work done before anyone called, or dropped by to donate a mangy fur tippet, because this afternoon was the post-mortem on the feeble results of the Christmas fundraising campaign. At twenty-five, Jude—the curator—was the age of most of the board members’ grandchildren.

The phone started up with a shrill jangle, and though she was inclined not to answer it, she did. It was the accent she recognized, more than the voice.

“Louise! Merry Christmas. Why are you whispering?” Jude broke in on her aunt’s gabbled monologue. “Not herself, how?”

“I just don’t think—” Louise interrupted herself in a louder voice: “I’m only on the phone, Rachel, I’ll be right in.”

As she stubbed out her cigarette, Jude tried to picture the house in England—a town called Luton—though she’d never seen it. “Put Mom on the line, would you?”

Instead of answering, her aunt called out, “Could you stick the kettle on?” Then, hissed into the phone, “Just a tick.”

Waiting, Jude felt irritation bloom behind her eyes. Her aunt had always liked her gin; could she possibly be drunk at, what—she checked the grandfather clock and added five hours—11:30 in the morning?

Louise came back on the line, in the exaggerated style of a community theatre production: “Your mother’s making tea.”

“She’d never complain, and I haven’t told her I’m ringing you,” her aunt whispered, “but if you ask me, you should pop over and bring her home.”

Pop over, as if Luton were a couple of kilometres down the road. Jude couldn’t keep her voice from cracking like a whip. “Could I please speak to my mother?”

“The yellow pot, “ Louise shouted, “the other’s for herbal. And a couple of those Atkins gingernuts.” Then, quieter, “Jude, dear, I must go, I’ve tai chi at noon—just take my word for it, would you please, she needs her daughter—”

The line went dead. Jude stared at the black Bakelite receiver, then dropped it back in the cradle.

She looked up the number in the stained address book on the counter, but after four rings she got the message, in Louise’s guarded tones: “You have reached 3688492 . . .”

“Me again, Jude,” she told the machine. “I—listen, I really don’t get what’s wrong. I’d appreciate it if Mom could call me back right away.” Rachel must be well enough to use the phone if she was walking around making tea, surely?

Jude cooked some oatmeal, just to kill a few minutes. After two spoonfuls her appetite disappeared.

This was ridiculous. Sixty-six, lean, and sharp, Jude’s mother never went to the doctor except for flu shots. Not a keen traveler, but a perfectly competent one. Louise was six years her elder, or was it seven? If there was something seriously wrong with Rachel—pain or fever, bleeding or a lump—surely Louise would have said? It struck Jude now that her aunt had sounded evasive, paranoid, almost. Could these be the first signs of senility?

Jude tried the Luton number again and got the machine. This time she didn’t leave a message, because she knew she’d sound too fierce. Surely the two sisters wouldn’t have gone out a minute after making a pot of tea?

Her stomach was a nest of snakes. Pop over, as easy as that. The Atlantic stretched out in her mind, a wide gray horror.

It wasn’t as if she were phobic, exactly. She’d just never felt the need or inclination to get on an airplane. It was one of those things that people wrongly assumed to be compulsory, like cell phones or gym memberships. Jude had got through her first quarter century just fine without air travel. In February, for instance, when much of the population of Ontario headed like shuddering swallows to Mexico or Cuba, she preferred to go snowshoeing in the Pinery. Two years ago, to get to her cousin’s wedding in Vancouver, she’d taken a week each way and slept in the back of her Mustang. And the summer her friends from high school had been touring Europe, Jude had been up north planting trees to pay for her first motorbike. Surely it was her business if she preferred to stay on the ground?

Your mother’s not herself. What was that supposed to mean?

Neither of them had called back. This whole thing, Jude told herself, would no doubt turn out to be nothing more than an inconvenient and expensive fantasy of her aunt’s. But in her firm, slightly childish script that hadn’t changed since grade school, she started writing out a CLOSED DUE TO FAMILY EMERGENCY notice to tape on the door of the one-room museum.

Rizla took the afternoon off from the garage to drive her to the airport in his new orange pickup. He was in a full-length shearling coat of Ben Turner’s; Jude had found it in a dry-cleaners’ bag in the basement, years after her father had decamped to Florida, and it gave her a shiver of pleasant spite to see Rizla wear it slung over a White Snake T-shirt stained with motor oil.

White specks spiraled into the windshield; the country roads were thickly coated with snow. Jude took a drag on the cigarette they were sharing. “So, how come when I called, it said ‘This number has been disconnected’?” “Just a temporary misunderstanding withthose dumb-asses at the phone company,” he said out of the side of his mouth.

“Uh-huh.” After a second, she asked, “What are your payments on the truck?”

“Isn’t she a beaut?” “She is, she’s a big gorgeous tangerine. What are your payments?”

Rizla kept his eyes on the road. “Leasing’s better value in the long run.”

“But if you can’t cover your phone bill—”

“Shit, if you’re planning to grill me on my budget all the way to Detroit, you can ride in the back.”

“Okay, okay.” Jude passed him the cigarette. “Why wouldn’t either of them have called me back? I left three messages,” she muttered, aware of repeating herself.

“Maybe your mom’s got something unmentionable,” he suggested. “She is British, after all.”

She flicked his ear, and Rizla yelped in pain. She took the cigarette back, and smoked it down to the filter.

“I bet the old gals are just getting on each other’s tits,” he said after a minute. “My sisters used to rip each other’s hair out, literally.”

“Mostly the middle ones.” Rizla came fifth in a Mohawk-Dutch family of eleven. An only chi...

"Every now and again, a writer comes along with a fully loaded brain and a nature so fanciful that she simply must spin out truly original and transporting stuff. To get lost in a book by one of these rare folks is to experience true happiness—and genuine relief that we can access such eccentric, untethered genius on a page, instead of, say, in person across the breakfast table. Emma Donoghue is such a writer."—THE SEATTLE TIMES 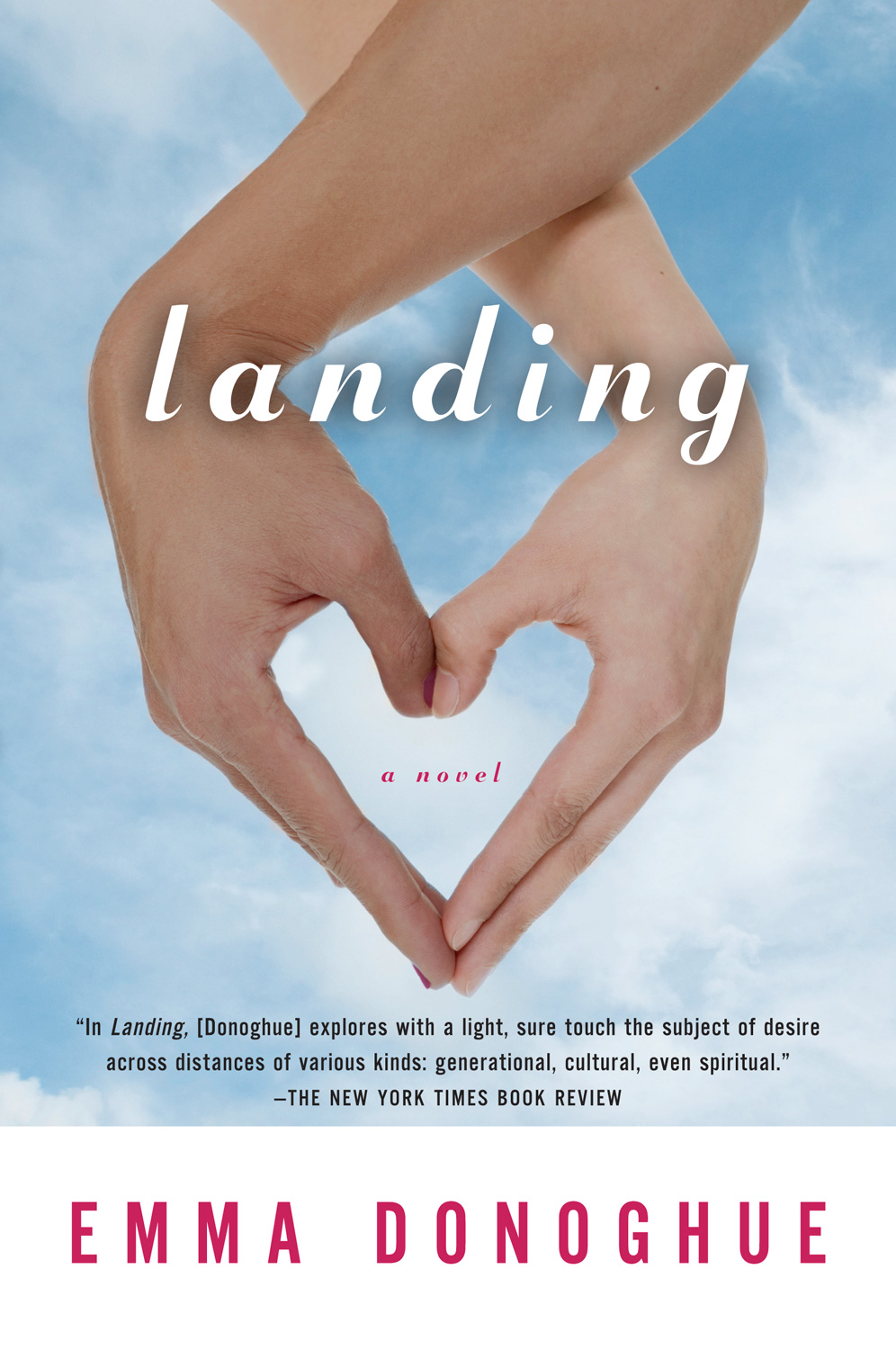