by Bruce Coville and Tony DiTerlizzi
$7.99

Shy Juliet Dove leaves Mr. Elives' magic shop with Helen of Troy's amulet--a virtual man magnet. Juliet doesn't know what she's got, but soon every boy in town is swoony for her. Yet, much as she'd like to lose all the unwanted attention, she can't: The amulet won't come off!

A sidesplittingly funny, heartbreaking whirlwind of a book about the high cost of loving, from the award-winning author of My Teacher Is an Alien and The Unicorn Chronicles.

About the author
Bruce Coville

BRUCE COVILLE is the author of over 100 books for children and young adults, including the international bestseller My Teacher is an Alien, the Unicorn Chronicles series, and the much-beloved Jeremy Thatcher, Dragon Hatcher. His work has appeared in a dozen languages and won children's choice awards in a dozen states. Before becoming a full time writer Bruce was a teacher, a toymaker, a magazine editor, a gravedigger, and a cookware salesman. He is also the creator of Full Cast Audio, an audiobook company devoted to producing full cast, unabridged recordings of material for family listening and has produced over a hundred audiobooks, directing and/or acting in most of them. Bruce lives in Syracuse, New York, with his wife, illustrator and author Katherine Coville. Visit his website at www.brucecoville.com.

"I don't have a boyfriend," she said softly.

That Bambi and Samantha had seen Juliet and Arturo walking together was no surprise. Arturo Perez was Juliet's across-the-backyard neighbor, and they had been walking to school together since first grade.

"Artureo and Juliet, the love story of the century!" cried Bambi. Clasping her hands she placed them against her cheek and fluttered her eyelids. "How Juliet does luh-uve that may-unn!"

Juliet flared. "Look who's talking, you pea-brained, metal-mouthed boy chaser! Did you ever see anything in pants that you didn't want? You'll probably have to wait to get the tin off your teeth, though. I hear boys don't like the taste of stainless steel!"

Juliet knew she'd made a mistake the moment the words left her mouth. Bambi had only been wearing braces since Monday and she was still sensitive about them. But Juliet had been desperate to turn the attention away from herself, and the blistering comments had escaped her lips before she even had a chance to think about them.

Explosions like this were what had earned her the ridiculous nickname Killer to begin with-ridiculous because, in truth, Juliet was the most painfully shy person in the entire Venus Harbor Middle School. Or the entire state, by her father's calculation. But Mr. Dove was given to poetic exaggeration.

Juliet hated the nickname, especially because the ferocious comments that earned it for her had never been spoken out of anger. It was just that the minute people started teasing her about personal matters, she felt such an acute panic that she would say anything-anything-to get them to leave her alone. Unfortunately, whenever she tried to explain that she did this because she was shy, people laughed.

"It's because you're too good at it," Arturo had told her once. "I mean, when you set your tongue on slice and dice, it's like you've got a Ginsu knife between your teeth."

Juliet might not have lashed out at Bambi quite so horribly if she hadn't already been upset over their language-arts teacher's announcement that they would be doing oral reports at the end of the month. As far as Juliet was concerned, doing an oral report was not much different from being slowly ground up in a sausage machine-except that, given a choice, she would have opted for the sausage machine. She could not think of anything more excruciating than having to stand up in front of people and speak.

All this was going through Juliet's mind later that afternoon as she pressed herself against the brick wall of the alley that ran alongside the Venus Harbor Cinema. She had ducked around the corner to hide when she saw Bambi and Samantha coming toward her. Though she kept telling herself that the simplest way to deal with the situation would be to walk up to Bambi and apologize, Juliet found the very idea terrifying. So she remained tight against the wall, barely breathing, wishing she could melt right into it, until the girls had gone by.

Unfortunately, Bambi and Samantha-Did either of them ever go anywhere alone? Juliet wondered-did not keep walking. Instead, they stopped to examine the poster for the weekend's big event, the Third Annual Venus Harbor Valentine's Day Poetry Jam.

The mental command didn't work. Bambi and Samantha stayed right where they were.

"My pathetic mother is totally jazzed because Scott Willis is coming to this," said Bambi.

"Who cares about a fat weatherman?" scoffed Samantha. "Corey Falcon is the one I'm excited about!"

"Just because you've got fifteen pictures of him on your wall?"

"You think he's hot, too!" protested Samantha. "Besides, did you ever read any of his poems? He's not just a great actor. He's got a beautiful soul!"

Juliet tried not to betray her hiding spot by making puking noises. The whole poetry jam was her father's idea and he had been grumbling for months about having to bring in "fake poets" like Scott Willis and Corey Falcon. She felt a twitch of irritation at Bambi and Samantha for even looking at the poster.

"So are you going to go?" asked Samantha, after a few minutes.

"Are you kidding?" said Bambi. "And miss a chance to see Corey Falcon in person? Besides, it's going to be fun. People are coming from all over. They even did a thing about it on Fox News last night." Suddenly she laughed.

"Remember what happened to Juliet the first year they did this?"

Samantha snorted. "That was so pathetic!"

Juliet's cheeks blazed nearly as red as the brick wall behind her as the unwanted memory swept over her. More than ever she wished she could just disappear.

"So-what are you going to do about her?" asked Samantha.

"Why should I do anything? Everyone knows what a jerk she is. I've got more important things to do than worry about getting back at Killer."

"I can't believe you're going to let her get away with saying those things," growled Samantha. "In fact, when I see her, I'm going to slap her face for you!"

The back end of the alley opened into the parking lot behind Cosgrove's grocery. Juliet raced across the lot, ignoring the hello called to her by Suzy Cosgrove. She shot behind the teddy-bear store, turned up Dell Street, then turned right, toward the beach. But somehow she must have gotten turned around, because the beach was only two blocks away, and she kept running and running. To her surprise, she found herself on a street she did not recognize-which seemed impossible, since she had lived in Venus Harbor all her life, and it wasn't that big a town.

Juliet slowed to a walk, pressing her hand against her side where a sharp pain had blossomed. She noticed that a mist had started to rise. Early fogs were not unknown in Venus Harbor, but this was thicker than usual, and the tendrils of it seemed to cling to her feet. She pulled her drab sweater more tightly around her shoulders and looked from side to side.

The street was lined with old-fashioned-looking shops. Like the fog, this was not unusual for Venus Harbor, where quaint was the official town style and nine-tenths of the stores-half of them selling either fudge or seashells-were designed to catch the eye of tourists. But the shop at the end of the street was even more old-fashioned-looking than the others. Its curved front window, divided into many panes, said in bold letters:

Where did that come from? wondered Juliet, finding it hard to believe Venus Harbor could possibly contain such a cool store-or that she had been unaware of it until now. Forgetting Bambi and Samantha, she waded through the fog, which was swirling around her knees now and seemed to get thicker as she approached the shop.

The door was made of carved wood instead of metal and glass like those of most of the stores in town. Juliet pressed on it.

The door swung open without a sound. A small bell tinkled overhead as she crossed the threshold.

She looked around for a clerk but there was no one in sight.

"Coville's easy style works well in a tale that has its share of both humor and heartache."—Booklist 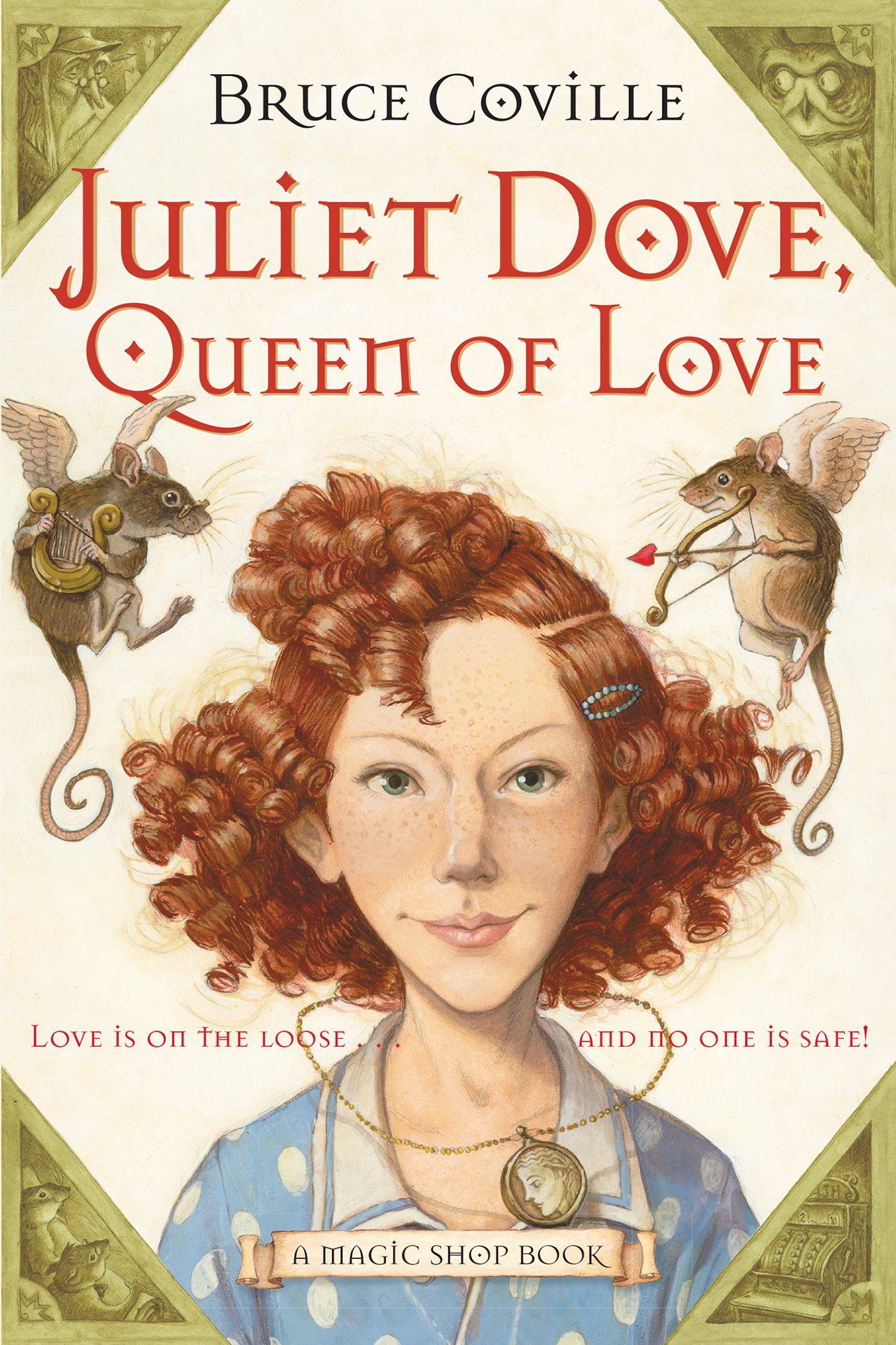