I'd Walk with My Friends If I Could Find Them

A powerful debut novel, set in and around the war in Afghanistan, that asks whether a single minute can change the course of a whole life

“Symphonic . . . One of the best works of literature to come from these wars.” — storySouth

“It’s almost like every aspect of life and loss is in there.” — NPR

Wintric Ellis joins the army as soon as he graduates from high school, saying goodbye to his girlfriend, Kristen, and to the backwoods California town whose borders have always been the limits of his horizon. Deployed in Afghanistan two years into a directionless war, he struggles to find his bearings in a place where allies could at any second turn out to be foes. Two career soldiers, Dax and Torres, take Wintric under their wing. Together, these three men face an impossible choice: risk death or commit a harrowing act of war. The aftershocks echo long after each returns home to a transfigured world. I’d Walk with My Friends If I Could Find Them is a vital meditation on the weight of war and a humane tale of love, family, and connection at any cost.

Jesse Goolsby’s fiction and essays have appeared in Narrative, the Kenyon Review, and elsewhere. He is the recipient of the Richard Bausch Short Story Prize, the John Gardner Memorial Prize in Fiction, and other honors. A U.S. Air Force officer, he lives in Tallahassee.

About the author
Jesse Goolsby

JESSE GOOLSBY is an Air Force officer and the author of the novel I'd Walk with My Friends If I Could Find Them. His fiction and essays have appeared in Narrative, Epoch, the Literary Review,Alaska Quarterly Review, the Greensboro Review, and other publications. He is the recipient of the Richard Bausch Fiction Prize, the John Gardner Memorial Award in Fiction, and a Holland & Knight Distinguished Fellowship from the Hambidge Center for the Creative Arts. He has earned honorable mentions in both The Best American Essays and The Best American Short Stories, and his work has been included in The Best American Mystery Stories. Goolsby was raised in Chester, California, and now lives in Tallahassee, Florida.

Be Polite but Have a Plan to Kill Everyone You Meet

Wintric Ellis, newly arrived, pushes his size 8 boot into the spongy ground and feels the subtle give of the earth run through the ball of his foot, up his leg, and settle in his camouflaged hip. Green grass in Afghanistan, he thinks, water somewhere. He smells damp soil and grass, unexpected but familiar — Little League center field, Kristen in a California meadow — and attempts to make this thick-bladed greenery stick alongside the everywhere, suck-you-dry desert he had imagined.

Although Wintric knows today is a low-risk humanitarian mission, the words slide him back into his default, visceral nervousness: Bombs, somewhere, everywhere. Already he has been told that roadside means nothing in this country. Big Dax and Torres have shared stories with him — everything from far-afield livestock to massive diesel trucks igniting the barely buried hell, not to mention the bombs strapped to men, women, children, dogs. Bombs the size of tennis balls, soccer balls, tackling dummies. Under the rising sun Wintric replays the refrain repeated among his platoon for each of his eight days in country: Don’t go looking for a fair fight.

Wintric watches the relaxed movements of the most experienced soldiers and he feels his body breathe. He pulls out his knife and crouches in the valley amid a mist of gnats. He plunges the blade into the soil and levers up a clump of grass. Silently he rises and collects his first sample of war in a plastic bag that he fists into a cargo pocket.

Nearby a group of mangy goats bleat in a grove of white-blossomed almond trees, their shepherd talking with the interpreter. For the first time since Wintric arrived the wind doesn’t howl, and he wonders if any kind of omen awaits in the warming air, but he pushes the thought from his mind when he can’t think of a single positive forecast. The size of tennis balls, soccer balls. He breathes and rubs his eyes. The shepherd laughs and nods and moves his hand to the interpreter’s shoulder, then hugs him.

Wintric observes the men start toward the small mountain of bottled water. Torres passes by and slaps his shoulder.

Wintric isn’t thirsty, but he keeps his mouth shut — when they say drink, he drinks. He straightens up, pats his cargo pocket, and steps and stops. He looks back at the straightening grass and watches the indentation of his boot print disappear.

Ten-thirty and the children and limbless adults are starting to arrive, and Wintric scans the group heading his way, wondering if he’ll be the one ordered to pat them down before the inoculation and prosthetic limb giveaway. He pushes his index fingers into his temples, then removes his camouflage blouse and tosses it on the hood of the dusty Humvee. Big Dax and Torres have been decent enough to keep him out of trouble for his first week, but they outrank him, and each has only a few months left, so he knows he’ll soon be the one palm-to-body with these incoming strangers.

Wintric studies his two superiors as they watch the arriving crowd. Big Dax towering and thick-shouldered, brick of a chin, dark, random freckles, scarred forearms, hands on his hips; Torres slim and handsome, black hair, sideburns, flat nose, outline of a mini-Bible in his pocket, hands interlocked on the top of his head.

Wintric nods and slowly walks over to the now settling group. The interpreter has his arms up, directing traffic, shouting at the dirty and quiet kids to stay in a single-file line along an outcropping of beige rocks. The adults are told to wait behind. On his short march over Wintric focuses on the adults, most missing a foot, a leg, or a portion of an arm. Light layers of clothing shield their bodies from the late-morning sun; various pant legs and shirtsleeves hang limp. He will have to touch all of these people.

“You know these people?” Wintric says.

“Thank you,” the man says before Wintric has touched him. Wintric glances back at the interpreter, who nods, then shakes his head.

“No problems here,” he says.

“What’s he doing here? He’s not missing anything.”

As with the others Wintric starts with the man’s shoulders, pats down his arms to his wrists, up his sides, down from his clavicle, chest, to his belly, where Wintric feels something bulging, soft, ball-shaped. He pauses for a moment, and when the bomb vision arrives, he whirls around, head down, and sprints. In the slow-motion frenzy he hears the man yell something, sees his own arms reach out in front of him, and he knows he will die, right now, that the searing blast will take him from behind, open up his back and skull, liquefy his body. He is all heartbeat as he screams “Bomb!” takes two more strides, and dives to the ground.

Behind him the man has lifted his shirt up to his neck, baring his torso, pointing at a fleshy protrusion.

Wintric lies face-down in the grass, eyes closed, body flexed. He hears skin and pushes himself up onto his elbows. Big Dax and Torres run toward him.

Wintric still hears his heart in his ears, and he squeezes his hands, then opens them. He cut his left hand during the dive and wipes the fine line of blood off on his pants. He stands, still dizzy, and peers back at the man, who cups the ball of flesh below his ribs. Wintric shakes his head and glances down at his palm, where fine dirt is mixed with coagulating blood.

Big Dax touches Wintric’s arm and Wintric shakes him off.

Longlisted for the Center for Fiction Flaherty-Dunnan First Novel Prize

"Traveling back and forth through time, Goolsby explores the challenges these men face before,during, and after their military tours, portraying their stresses vividly and palpably. While depicting realistic and personal images of the psychological traumas of war, he leaves...readers to draw their own conclusions."— BOOKLIST

"This bracing, riveting debut opens in Afghanistan, and actions there shadow the lives of Goolsby's characters. But it's the accidents, debts, and desires of the home front that continue to wreak havoc as war memories turn into just that — memories — and soldiers mired in the past realize that tackling the future may be their true struggle after all."—SIOBHAN FALLON, author of You Know When the Men Are Gone

"I'd Walk with My Friends If I Could Find Them offers a heartbreaking and humane lens into the lives of those connected to war, refusing to avert its gaze when confronted with even the most gut-wrenching situations. Jesse Goolsby recognizes that the battlefield stretches far beyond the demarcations of a combat zone, or the borders of Afghanistan. That said, this is not strictly a book about war — this is a book about the human heart. This is the news, rarely told, of the actual world we live in."—BRIAN TURNER, author of My Life as a Foreign Country

“Long after the combatants and non-combatants alike have vanished from this earth, the afterlife of war is a book, war’s only survivor, and every true book about war cries out, Stop, or at least, Remember. I’d Walk with My Friends If I Could Find Them, Jesse Goolsby’s ambitious, multi-layered, brutally honest debut novel, is such a book, an antidote to our nation’s disconnect from our misadventures overseas.”—BOB SHACOCHIS, author of The Woman Who Lost Her Soul

"Not only is Jesse Goolsby one of the very rare authors who writes with authoritative insight into the warfare of the 21st century, he does so with an even deeper insight into the profound yearning for connection, for identity, that drives us all.  Goolsby is a consummate artist, and the publication of I’d Walk with My Friends If I Could Find Them is a major literary event.”—ROBERT OLEN BUTLER, author of A Good Scent from a Strange Mountain

"Ijust read the most satisfying novel in years, Jesse Goolsby's I'd Walk with My Friends If I Could Find Them. Itis not just a war novel, but rather an earthquake-in-your-soul novel. That art that shakes you down. I am blown away."—MICHAEL GARRIGA, author of The Book of Duels 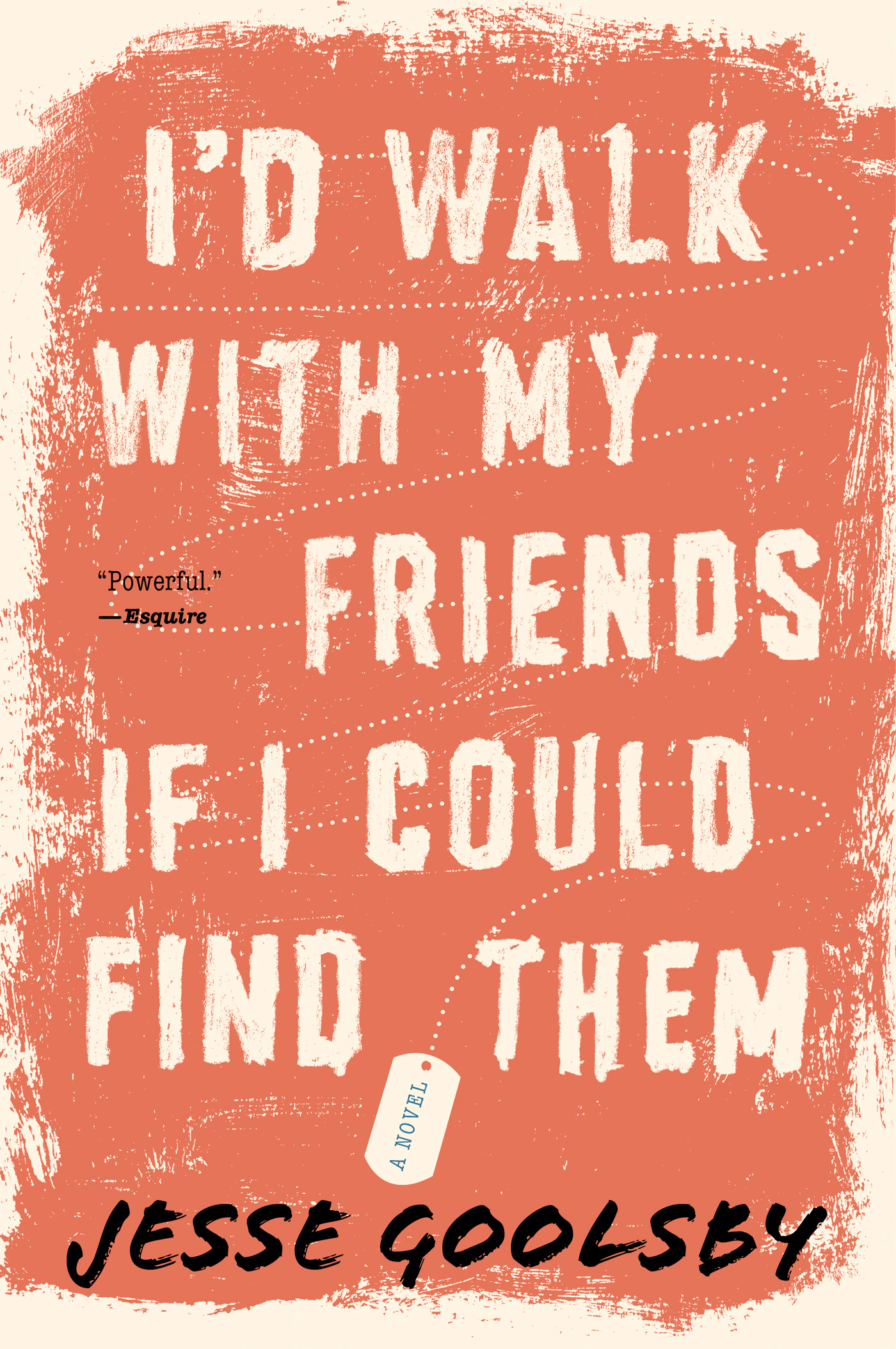