How to Write an Autobiographical Novel: Essays

From the author of The Queen of the Night, an essay collection exploring how we form our identities in life, in politics, and in art

From the author of The Queen of the Night, an essay collection exploring his education as a man, writer, and activist—and how we form our identities in life and in art.

As a novelist, Alexander Chee has been described as “masterful” by Roxane Gay, “incendiary” by the New York Times, and "brilliant" by the Washington Post. With How to Write an Autobiographical Novel, his first collection of nonfiction, he’s sure to secure his place as one of the finest essayists of his generation as well.

How to Write an Autobiographical Novel is the author’s manifesto on the entangling of life, literature, and politics, and how the lessons learned from a life spent reading and writing fiction have changed him. In these essays, he grows from student to teacher, reader to writer, and reckons with his identities as a son, a gay man, a Korean American, an artist, an activist, a lover, and a friend. He examines some of the most formative experiences of his life and the nation’s history, including his father’s death, the AIDS crisis, 9/11, the jobs that supported his writing—Tarot-reading, bookselling, cater-waiting for William F. Buckley—the writing of his first novel, Edinburgh, and the election of Donald Trump.

By turns commanding, heartbreaking, and wry, How to Write an Autobiographical Novel asks questions about how we create ourselves in life and in art, and how to fight when our dearest truths are under attack.

About the author
Alexander Chee

ALEXANDER CHEE is the best-selling author of the novels The Queen of the Night and Edinburgh, and the essay collection How to Write an Autobiographical Novel. He is a contributing editor at the New Republic, and an editor at large at Virginia Quarterly Review. His work has appeared in The Best American Essays 2016, the New York Times Magazine, the New York Times Book Review, the New Yorker, T Magazine, Slate, Vulture, among others. He is winner of a 2003 Whiting Award, a 2004 NEA Fellowship in prose and a 2010 MCCA Fellowship, and residency fellowships from the MacDowell Colony, the VCCA, Civitella Ranieri and Amtrak. He is an associate professor of English at Dartmouth College.

Praise for How to Write an Autobiographical Novel:

Named a Best Book by:

Finalist for the Lambda Literary Award for Gay Memoir/Biography

Longlisted for the Carnegie Medal of Excellence in Nonfiction

One of Min Jin Lee's Summer Reads in the Washington Post

One of Curtis Sittenfeld's Summer Reads in the Guardian

"If writing, too, is a form of drag for Chee, it is also an act of mystic invocation and transference...Chee leavens his heaviest topics—the decimation of the gay community in the late 1980s and early ’90s, the repressed memory of sexual abuse that inspired Edinburgh—with charming episodes like his stint as a waiter at William and Pat Buckley’s Park Avenue maisonette, a job that prompted a crisis of conscience given Buckley’s infamous proposal to brand AIDS patients on their wrists and buttocks...Even at his most mystical, Chee is generous; these pieces are personal, never pedagogical. They bespeak an unguarded sincerity and curiosity. Chee is refreshingly open about his sometimes liberating, sometimes claustrophobic sense of exceptionality...He reminds us that whomever a writer pictures as his audience, he is also writing into absence, standing in testimony for the sake of the dead. Like most of the essays here, 'After Peter' pulses with urgency, one piece from a life in restless motion. It is not necessary to agree that How to Write an Autobiographical Novel is itself a kind of novel in order to appreciate that Chee has written a moving and personal tribute to impermanence, a wise and transgressive meditation on a life lived both because of and in spite of America, a place where, he writes, you are allowed to speak the truth as long as nothing changes.'"

"Two-thirds of the way through Alexander Chee's How to Write an Autobiographical Novel, I abandoned my sharpened reviewer's pencil in favor of luxuriating in the words. Chee's writing has a mesmerizing quality; his sentences are rife with profound truths without lapsing into the didactic...Chee is a very special artist; his writing is lyrical and accessible, whimsical and sad, often all at the same time. No doubt he is an inspiring writing teacher as well. His views on writing reflect his own, thoughtfully examined life."

"As Chee’s gaze turns inward, he beckons readers to experience his private moments with such clarity and honesty that we’re immediately brought into his consciousness. At the same time, he asks us to contemplate the largest questions about identity, sexuality, family, art and war...[A] trailblazing collection...By the end of this moving collection, we learn through Chee’s experiences that to be a writer is to continuously reconsider the self, to find what drives you even in moments of despair."

"Alexander Chee’s marvel of a collection opens with the sting of clarity...The 16 essays that knit together his profound and resonant collection are a nimble study in radical self-invention...The revelations that follow crackle with the same glowing, essential truths."

"Chee’s insights about writing, love and activism are hard-won, honest and incredibly wise."

"The latest brilliant fiction writer to publish a new essay collection this year...Alexander Chee proves why he’s a master of the form. How to Write an Autobiographical Novel meditates on how art shapes who we are, unpacking its author’s own coming-of-age as a gay Korean man to craft persuasive, engrossing arguments."

"As profound as they are beautiful, Chee's essays impart wisdom from a life fully lived, and speak to what it means to be a writer and reader in contemporary times."

“Alexander Chee published Edinburgh, a singularly beautiful and psychologically harrowing first book that still stands as one of the best American novels of this century. Now, he’s published How to Write an Autobiographical Novel, a first book of essays that is just as good, and almost as singular, as his novelistic debut…How good is How to Write an Autobiographical Novel? It’s so good that I could fill my word count just with quotations…one of its beauties is how simultaneously shaped and flexible it is, both thematically coherent and varied in subject matter…Chee’s particular style of mind and habits of moral engagement hold the collection together; every essay, no matter the subject, exhibits warmth, rigor, tact…The mask conceals and it reveals; writing transfigures and it uncovers. That’s the gift that writing has given Chee, and it’s the gift that his wonderful new collection gives its readers.”

"A searing examination of the costs of writing...achingly vulnerable."

"A deeply probing exploration of being a writer, an activist, gay, and half-Korean all at once. Hewing to his own advice as a teacher, he places no limits on the questions he asks of himself and of the reader, which feel at once overwhelmingly intimate but strikingly universal...How to Write an Autobiographical Novel is filled with the uncertainty that comes with feeling your sense of self forming. It is, at once, a memoir and a survival guide for being your most authentic self."

"A knowing and luminous self-portrait."

"Chee’s essays convey the effect of new forms being invented before your eyes. His book is a fragmented portrait of the young artist donning and shedding various masks. Chee makes use of conventional vehicles — the memoir, the list, the litany of didactic aphorisms — to arrive at moral and aesthetic discoveries that you sense he... 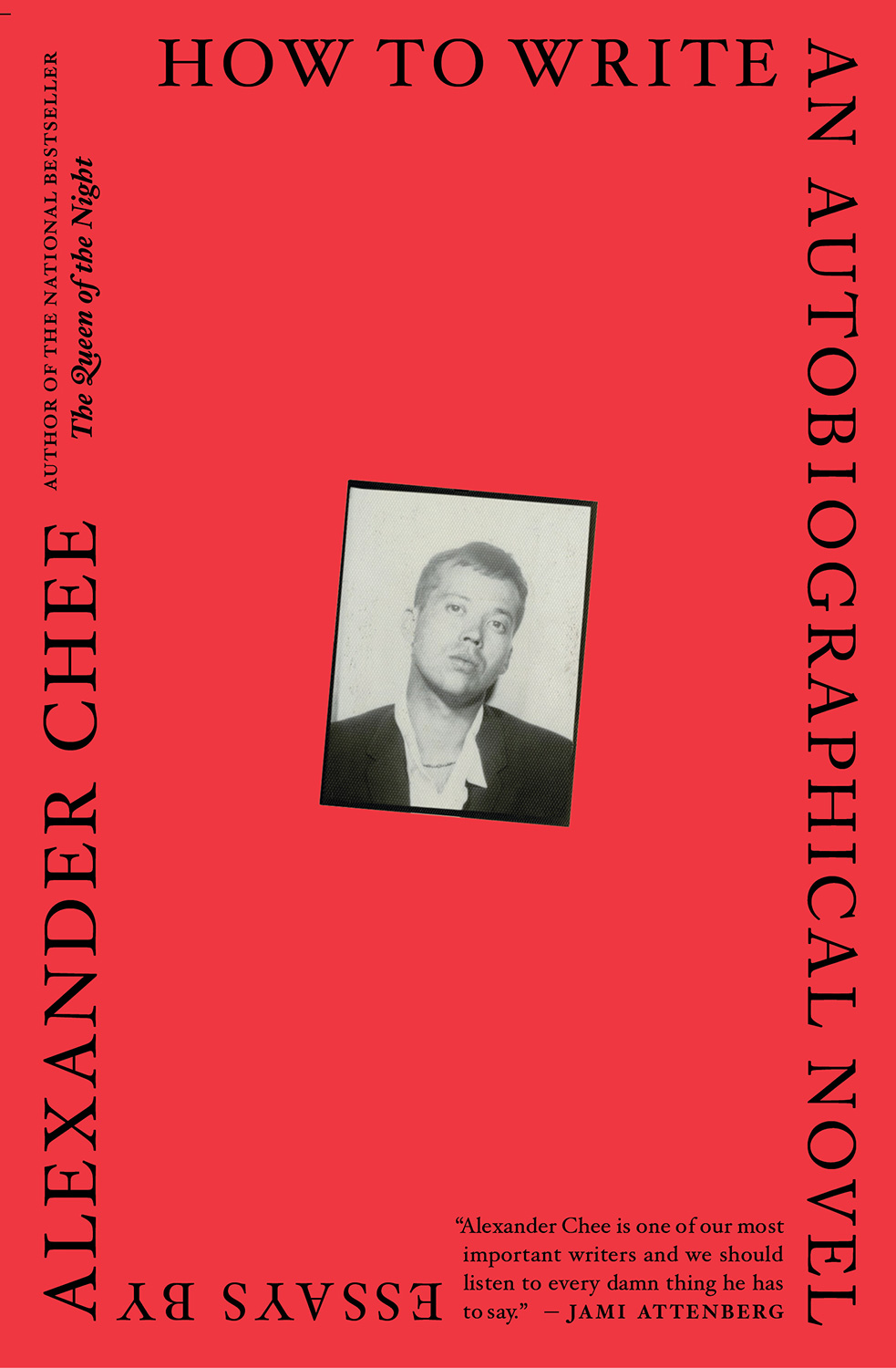