House of Stone: A Memoir of Home, Family, and a Lost Middle East

A crowning achievement in the career of revered journalist Anthony Shadid—who died while on assignment in Syria in February 2012—House of Stone tells the story of rebuilding Shadid's ancestral home in Lebanon amid political strife.

In the summer of 2006, racing through Lebanon to report on the Israeli invasion, Anthony Shadid found himself in his family’s ancestral hometown of Marjayoun. There, he discovered his great-grandfather’s once magnificent estate in near ruins, devastated by war. One year later, Shadid returned to Marjayoun, not to chronicle the violence, but to rebuild in its wake.

So begins the story of a battle-scarred home and a journalist’s wounded spirit, and of how reconstructing the one came to fortify the other. In this bittersweet and resonant memoir, Shadid creates a mosaic of past and present, tracing the house’s renewal alongside the history of his family’s flight from Lebanon and resettlement in America around the turn of the twentieth century. In the process, he memorializes a lost world and provides profound insights into a shifting Middle East. This paperback edition includes an afterword by the journalist Nada Bakri, Anthony Shadid’s wife, reflecting on his legacy.

“A poignant dedication to family, to home, and to history . . . Breathtaking.” — San Francisco Chronicle

“Entertaining, informative, and deeply moving . . . House of Stone will stand a long time, for those fortunate enough to read it.” — Telegraph (London)

About the author
Anthony Shadid

ANTHONY SHADID(1968-2012), author of Night Draws Near, was an unparalleled chronicler of the human stories behind the news. He gained attention and awards, including the Pulitzer Prize, for his front-page reports in the Washington Post from Iraq. As Middle East correspondent for the New York Times, he covered the Arab Spring from Egypt to Libya (where he was held captive in March, 2011) to Syria. In 2010, he earned his second Pulitzer. Tragically, on February 16, 2012, he died while on assignment in Syria.

The Arabic language evolved slowly across the millennia, leaving little undefined, no nuance shaded. Bayt translates literally as house, but its connotations resonate beyond rooms and walls, summoning longings gathered about family and home. In the Middle East, bayt is sacred. Empires fall. Nations topple. Borders may shift or be realigned. Old loyalties may dissolve or, without warning, be altered. Home, whether it be structure or familiar ground, is, finally, the identity that does not fade.

In old marjayoun, in what is now Lebanon, Isber Samara left a house that never demanded we stay or enter at all. It would simply be waiting, if shelter was necessary. Isber Samara left it for us, his family, to join us with the past, to sustain us, to be the setting for stories. After years of trying to piece together Isber’s tale, I like to imagine his life in the place where the fields of the Houran stretched farther than even the dreamer he was — a rich man born of a poor boy’s labors — could grasp.

In an old photo handed down, Isber Samara’s heavy-seeming shoulders suggest the approach of the old man he would never become, but his expression retains a hint of mischief some might call youthful. More striking than handsome, his face is weathered from sun and wind, but his eyes are a remarkable Yemeni blue, rare among the Semitic browns of his landscape. Though the father of six, he seems beyond proper grooming. His hair, apparently reddish, is tousled; his mustache resembles an overgrown scattering of brush. Out to prove himself since he was a boy, Isber would one day come to believe that he had.

By the time the photo of Isber and his family was taken, he was forty or so, but I am drawn more to the Isber that he became — a father, no longer so ambitious, parted from his children, whom he sent off to America to save their lives. I wonder if he pictured them and their descendants — sons and daughters, grandsons and granddaughters, on and on — moving through lives as unpredictable as his. Did he see us in years ahead, adrift, climbing the cracked steps and opening his doors?

At Isber’s, the traveler is welcome, befitting the Bedouin tradition of hospitality that he inherited. The olive and plum trees stand waiting at this house of stone and tile, completed after World War I. The place remains in our old town where war has often stopped time and, like an image reflected in clear water, lingers as well in the minds of my family. We are a clan who never quite arrived home, a closely knit circle whose previous generations were displaced during the abandonment of our country decades ago. When we think of home, as origin and place, our thoughts turn to Isber’s house.

Built on a hill, the place speaks of things Levantine and of a way of life to which Isber Samara aspired. It recalls a lost era of openness, before the Ottoman Empire fell, when all sorts drifted through homelands shared by all. The residence stands in Hayy al-Serail, a neighborhood once as fine as any in the region, an enclave of limestone, pointed arches, and red tile roofs. The tiles here were imported from Marseilles and, in the 1800s, suggested international connections and cosmopolitan fashionableness. They were as emblematic of the style of the Levant as the tarbush hats worn by the Ottoman gentlemen who lived in the Hayy, where the silver was always polished and the coffee came often in the afternoon. Old patriarchs — ancient and dusty as the settees — wiped rheumy eyes with monogrammed handkerchiefs. Sons replaced fathers, carrying on treasured family names. Isber was not one so favored.

In a place and time not known for self-invention, Isber created Isber. His extended family, not noteworthy, consisted of “less than twenty houses.” His furniture, though expensive and imported from Syria, was as recently acquired as his fortune, and his house stood out not just because of its newness. It was a place built with the labor of a rough-hewn merchant whose eye was distracted from accounts only by his wife, Bahija. It serves as a reminder of a period of rare cultivation and unimaginable tragedy; it announces what a well-intentioned but imperfect man can make of life. Isber’s creation speaks of what he loved and what sustained him; it reminds us that everyday places say much, quietly. The double doors of the entrance are tall and wide for men like Isber, not types to be shut in.

Isber, whose daughter Raeefa gave birth to my father, was my great-grandfather. I came of age with remembrances that conjured him back to life, tales that made him real and transported my family to his world, a stop gone missing on recent maps: Jedeidet Marjayoun. This is the way my family refers to our town, our hometown. Never Jedeida, never just Marjayoun. We use the full name, a bow of respect, since for us the place was the beginning. It was bayt, where we came to be.

Settled by my forebears, Marjayoun was once an entrepôt perched along routes of trade plied by Christians, Muslims, and Jews which stitched together the tapestry of an older Middle East. It was, in essence, a gateway — to Sidon, on the Mediterranean, and Damascus, beyond Mount Hermon; to Jerusalem, in historic Palestine; and to Baalbek, the site of an ancient Roman town. As such, this was a place as cosmopolitan as the countryside offered. Its learning and sophistication radiated across the region.

Yet lingering in small places is not in favor now; they no longer seem to fit the world. Yes, Marjayoun is fading, as it has been for decades. It can no longer promise the attraction of market Fridays, when all turned out in their finery — women in dresses from Damascus, gentlemen with gleaming pocket watches brought from America. At night, there are only flickering lights, which even a desperate traveler could overlook. In the Saha, or town square, there are dusty things — marked down for decades — for sale. No merchants shine counters, or offer sherbets made from snow, or sell exotic tobaccos. The cranky sheikh who filled prescriptions, if he cared to, is no more. The town no longer looks out to the world, and it is far from kept up. Everywhere it is scattered with bits and pieces, newspapers from other decades, odd things old people save. Of course, no roads run through Marjayoun anymore. A town whose reach once spanned historic Syria, grasping Arish in the faraway Sinai Peninsula of Egypt before extending, yet farther, to the confluence of the Blue and the White Niles, now stretches only a mile or so down its main thoroughfare.

Once, in this place, my family helped raise the cross and disturb the peace. We were known here, not for gentle natures or even temperaments, though we were among the town’s first Christians. We walked these streets, played a role in determining where they would go. And then we used them to leave. Although our family tree still has olives on its branches, we follow the tradition of remaining mastourin (hidden, invisible, masked) when it comes to emotions, yet there are sometimes tears when we look back.

Isber’s is one of the many houses left behind here, one of those we call mahjour, an Arabic word meaning abandoned, forsaken, lonely. The leftover houses — spindly, breaking down, haunted — speak of Marjayoun’s lost heyday. For many who have walked by them through many years and wars and passings, they are friends. In their shattered windows, those who pass by see shiny panes and all that hap...

Reviews
"This is not just the Arab world’s Year in Provence. It is as if Shadid has combined the breakthrough effects of Amy Tan’s The Joy Luck Club, William Faulkner’s As I Lay Dying, and Frances Fitzgerald’s Fire in the Lake into one enormously likeable book. It is a masterpiece." — John Freeman, Boston Globe "Elegiac, heartbreaking . . . A book conceived as an introspective project of personal recovery — as well as a meditation on politics, identity, craft, and beauty in the Levant — now stands as a memorial. It is a fitting one because of the writing skill and deep feeling [Shadid] unobtrusively displays." — Steve Coll, New York Times "An apt testament — a moving contemplation of how the dead stay with us, and how war scrambles the narrative of family life." — The New Yorker

"Profound, insightful, tragic, and funny . . . There is not space here to sell out all of this book’s many rewards . . . The prose is ripe, the biblical landscapes vividly rendered." — Telegraph (London)

"Shadid’s great skill as a journalist was that of a master storyteller, and he’s never been more effective than in his final book." — Bookforum

"An honest-to-god, hands-down, undeniable and instant classic . . . written with levity and candor and lyricism that makes the book, improbably, both a compulsive read and one you don’t want to end." — Dave Eggers, author of A Hologram for the King 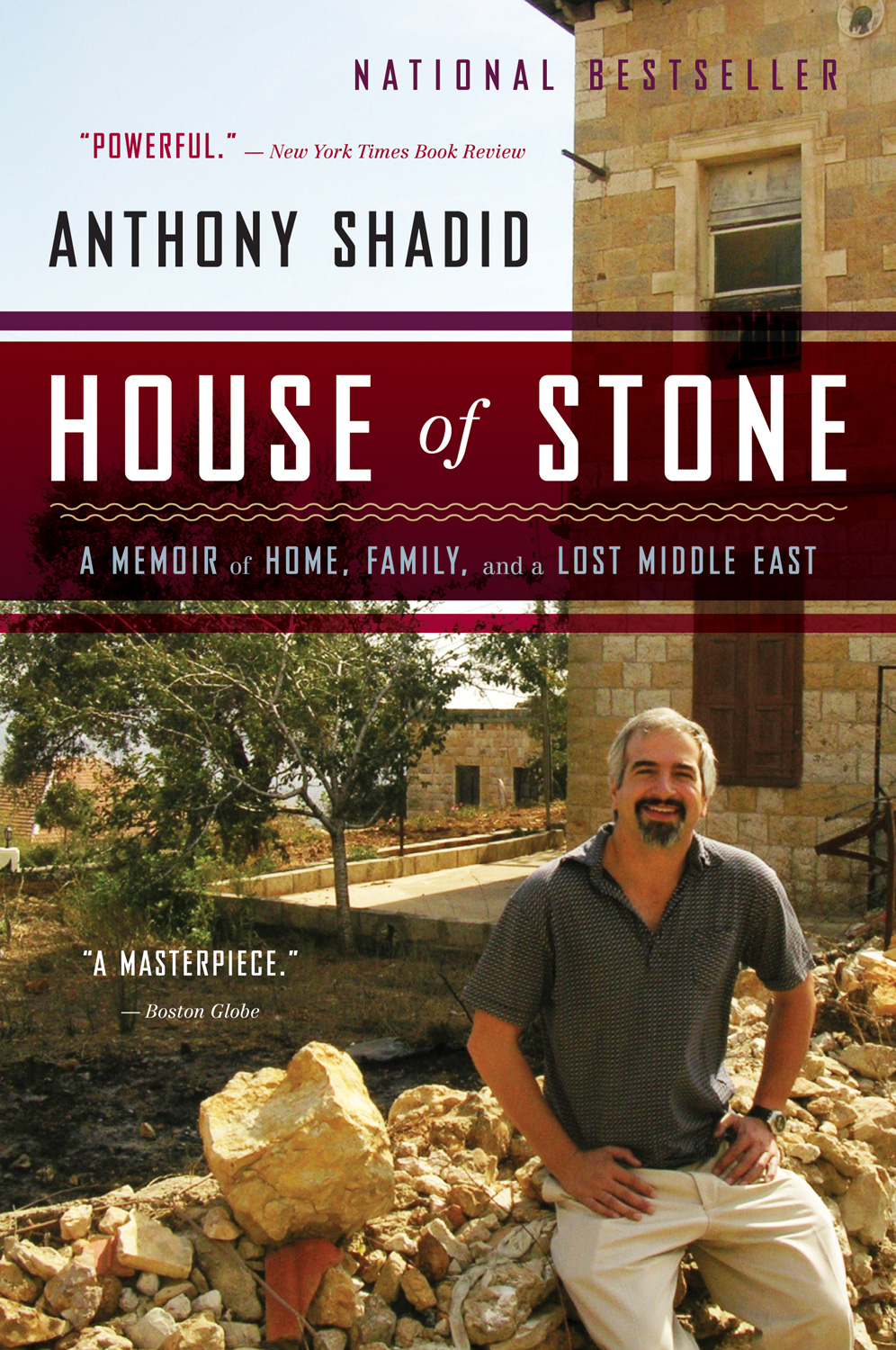