He Who Fears the Wolf

by Karin Fossum and Felicity David
$14.95

Inspector Sejer is hard at work again, investigating the brutal murder of a woman who lived alone in the middle of the woods. The chief suspect is another loner, a schizophrenic recently escaped from a mental institution. The only witness is a twelve-year-old boy, overweight, obsessed with archery, and a resident at a home for delinquents. When a demented man robs a nearby bank and accidentally takes the suspect hostage, the three misfits are drawn into an uneasy alliance.

Shrewdly, patiently, as is his way, Inspector Sejer confronts a case where the strangeness of the crime is matched only by the strangeness of the criminals, and where small-town prejudices warp every piece of information he tries to collect. Fossum once again provides extraordinary insight into marginalized lives and richly evokes the atmosphere she captured so brilliantly in Don't Look Back.

About the author
Karin Fossum

KARIN FOSSUM is the author of the internationally successful Inspector Konrad Sejer crime series. Her recent honors include a Gumshoe Award and the Los Angeles Times Book Prize for mystery/thriller. She lives in Norway.

A dazzling ray of light slanted in through the trees.

The shock brought him up short. He wasn't ready. He got out of bed, made his way slowly through the dark house, still half-asleep, and came out onto the front steps. And there he encountered the sun.

It struck his eyes like an awl. He raised his hands to his eyes, but the light kept coming, penetrating cartilage and bone, all the way into the dark of his skull. Everything turned blindingly white inside. His thoughts fled in all directions, shattered into atoms. He wanted to scream, but he never screamed because to do so was beneath his dignity. Instead he clenched his teeth and stood as still as he could on the steps. Something was happening. The skin on his head began to tighten; a tingling sensation that was getting stronger. Trembling, he stood with his hands on his face. He felt his eyes being pulled apart as his nostrils flared, growing as big as keyholes. He whimpered faintly and tried to resist, but he couldn't stop the violent force. Bit by bit his features were erased. All that remained was a naked skull covered with translucent, white skin.

He struggled frantically, moaning as he tried to feel his face, to be sure it was still there. His nose had turned soft and disgusting. He took his hand away-he had ruined what little was left, could feel it sliding off, losing its shape like a rotten plum.

And then it released him. Anxiously he took a breath, and then he felt his face slip back into place. He blinked several times, and opened and shut his mouth. But as he was about to move forward he felt a deep pain in his chest, the sharp claws of an invisible monster. He doubled over, wrapping his arms around his torso to restrain the force that was yanking the skin of his breast tighter and tighter. His nipples vanished into his armpits. The skin on his bare chest grew thinner, the veins stood out like knotty cables, pulsing with black blood. He was bent nearly double, and knew that he was no longer able to resist it.

Suddenly he split open like a troll in the sunlight. His guts and intestines poured out. He tried to keep everything in by seizing hold of the edges of the wound and pulling them together, but it seeped out and ran through his fingers, collecting at his feet like the entrails of a slaughtered animal. His heart was still beating, trapped behind his ribs, terrified, pounding. He stood like that for a long time, bent double and gasping. He opened one eye and cast an anxious glance down his body. His abdominal cavity was empty. The outpour had stopped. He clumsily began to gather up what had come out, stuffing it back in with one hand while he held on to his skin with the other, to prevent it from sliding out again. Nothing was in the right place; there were strange bulges everywhere, but if he could get the wound closed, no one would know. He wasn't made like other people, though this wasn't plain to see. He held on to the skin with his left hand, continuing to shove with his right. At last he got most of it inside again. Only a small spattering of blood was left on the steps. He pressed hard on the wound and felt it starting to close up, breathing cautiously so it would not open again. The sun was still shining through the trees, its white beams as sharp as swords. But he was whole again. Everything had happened too fast. He shouldn't have gone straight from bed out into the sunlight. He had always moved in a different space, seeing the world through a murky veil that took the sting out of the light and the sounds coming from outside. He held the veil in place by concentrating hard. A moment ago he had slipped up, had run out into the new day without taking stock, like a child.

His punishment seemed unreasonably harsh. Because as he slept on the dark bed, he had dreamed about something that made him sit bolt upright and then rush outside without thinking. He closed his eyes and recalled some images. He was looking at his mother at the bottom of the stairs. Out of her mouth gushed warm red blood. Fat and round, wearing a white apron with big flowers, she reminded him of a toppled jug, emptying red gravy. He remembered her voice, always accompanied by a dark velvety tone.

Then he went back inside the house.

This is a story about Errki.

It began like this: at 3 A.M. he left the asylum. We don't refer to it as the asylum, Errki, and even though you sure have the right to call it whatever you like in private, you ought to take other people into consideration and give it a different name. It's a matter of courtesy. Or tact, if you will. Have you ever heard of that?

She was so eloquent, God help her, that her words seemed to seep out of her like oil. After the words came her sound, a shrill electric organ.

"It's called the Beacon," he said, and gave an acid smile. "Those of us here in the Beacon are all one big family. The telephone rings, may I speak to the Beacon please? Could someone get the mail for the Beacon?"

"Precisely. It's all a matter of habit. Everyone has to show a little consideration."

"Not me," he replied in a sullen voice. "I was committed against my will, per Paragraph 5. Dangerous to myself and possibly to others."

He leaned forward and whispered in her ear.

"Thanks to me you can moon around on pay grade 27."

The night nurse shivered. This was the time of day when she felt most vulnerable. This no-man's-land between night and morning, a gray void when the birds stopped singing and you couldn't be sure that they'd ever sing again. When anything might have happened and she didn't yet know about it. She slumped a little, feeling faint. She didn't have the strength to see his pain, to remember who he was, that he was her charge. She simply found him repulsive, self-absorbed, and nasty.

"I realize that," she snapped. "But you've been here for four months now, and as far as I can tell, you seem to like it well enough."

As she said this her lips pursed like the beak of a hen. The organ struck a strident chord.

And so he left. It wasn't hard. The night was warm, and the window was nearly a foot open. It was locked with a steel bar, but he managed to remove the whole bar, using his belt buckle. The building was more than a hundred years old, and the screws came smoothly out of the rotting wood. His room was on the second floor. He jumped out the window as light as a bird and landed on the lawn.

He didn't cross the parking lot but instead headed through the woods toward the small lake, which they called the Well. It didn't matter which route he took. The point was that he didn't want to stay in the Beacon any more.

The lake was beautiful. It didn't put on airs, just lay there without a ripple, resting in the landscape, open and still. Didn't push him away, didn't lure him forward. Didn't touch him. Was simply there. The asylum was only a stone's throw away but invisible because of the trees. Nestor asked him to stop for a moment, and he did. He stared down into the black Well, and thought of Tormod, who was found floating face down in the water, wearing rubber gloves, as always, with his blond hair waving in the greenish black water. He didn't look very good, but then he never had. He was fat and sluggish with colorless eyes, and besides he was stupid. A disgusting, puddinglike fellow who went around asking people to excuse him, afraid of infecting them or of being in the way, afraid that someone would notice his contaminated breath. Now the poor man was with God. Maybe he was sloshing around on a cloud, freed at last from his clammy gloves. Maybe he'd met Errki's mother up there, maybe she was floating on the cloud next to his. Errki loved his mother. The thought of Tormod's fluttering eyes with the blond eyelashes made him swallow hard. He gave a couple of irritated shrugs of his thin shoul...

PRAISE FOR DON'T LOOK BACK

"You should be as delighted as I am to welcome to American book-shelves Inspector Konrad Sejer."-CHICAGO TRIBUNE

"Sejer belongs alongside the likes of Adam Dagliesh and Inspector Morse-a gifted detective and troubled man, whom I am grateful to have met and look forward to knowing better." 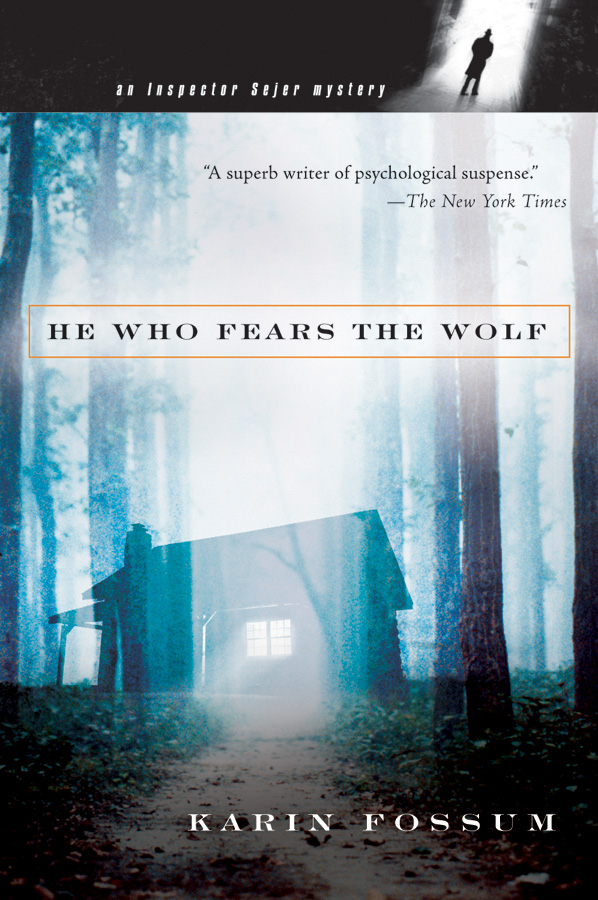