It all begins with a strange coin on a sun-warmed sidewalk. Jane finds the coin, and because she and her siblings are having the worst, most dreadfully boring summer ever, she idly wishes something exciting would happen. And something does: Her wish is granted. Or not quite. Only half of her wish comes true. It turns out the coin grants wishes—but only by half, so that you must wish for twice as much as you want. Wishing for two times some things is a cinch, but other doubled wishes only cause twice as much trouble. What is half of twice a talking cat? Or to be half-again twice not-here? And how do you double your most heartfelt wish, the one you care about so much it has to be perfect?

Alice Hoffman is the author of many books for children including Aquamarine, Green Angel, and Nightbird. Her books for adults include Practical Magic, The Museum of Extraordinary Things,The Dovekeepers and The Marriage of Opposites. Half Magic is her favorite book for children and Edward Eager is her favorite children's book author.

It began one day in summer about thirty years ago, and it happened to four children.

Jane was the oldest and Mark was the only boy, and between them they ran everything.

Katharine was the middle girl, of docile disposition and a comfort to her mother. She knew she was a comfort, and docile, because she’d heard her mother say so. And the others knew she was, too, by now, because ever since that day Katharine would keep boasting about what a comfort she was, and how docile, until Jane declared she would utter a piercing shriek and fall over dead if she heard another word about it. This will give you some idea of what Jane and Katharine were like.

Martha was the youngest, and very difficult.

The children never went to the country or a lake in the summer, the way their friends did, because their father was dead and their mother worked very hard on the other newspaper, the one almost nobody on the block took. A woman named Miss Bick came in every day to care for the children, but she couldn’t seem to care for them very much, nor they for her. And she wouldn’t take them to the country or a lake; she said it was too much to expect and the sound of waves affected her heart.

“Clear Lake isn’t the ocean; you can hardly hear it,” Jane told her.

“It would attract lightning,” Miss Bick said, which Jane thought cowardly, besides being unfair arguing. If you’re going to argue, and Jane usually was, you want people to line up all their objections at a time; then you can knock them all down at once. But Miss Bick was always sly.

Still, even without the country or a lake, the summer was a fine thing, particularly when you were at the beginning of it, looking ahead into it. There would be months of beautifully long, empty days, and each other to play with, and the books from the library.

In the summer you could take out ten books at a time, instead of three, and keep them a month, instead of two weeks. Of course you could take only four of the fiction books, which were the best, but Jane liked plays and they were nonfiction, and Katharine liked poetry and that was nonfiction, and Martha was still the age for picture books, and they didn’t count as fiction but were often nearly as good.

Mark hadn’t found out yet what kind of nonfiction he liked, but he was still trying. Each month he would carry home his ten books and read the four good fiction ones in the first four days, and then read one page each from the other six, and then give up. Next month he would take them back and try again. The nonfiction books he tried were mostly called things like “When I was a Boy in Greece,” or “Happy Days on the Prairie”—things that made them sound like stories, only they weren’t. They made Mark furious.

“It’s being made to learn things not on purpose. It’s unfair,” he said. “It’s sly.” Unfairness and slyness the four children hated above all.

The library was two miles away, and walking there with a lot of heavy, already-read books was dull, but coming home was splendid—walking slowly, stopping from time to time on different strange front steps, dipping into the different books. One day Katharine, the poetry-lover, tried to read Evangeline out loud on the way home, and Martha sat right down on the sidewalk after seven blocks of it, and refused to go a step farther if she had to hear another word of it. That will tell you about Martha.

After that Jane and Mark made a rule that nobody could read bits out loud and bother the others. But this summer the rule was changed. This summer the children had found some books by a writer named E. Nesbit, surely the most wonderful books in the world. They read every one that the library had, right away, except a book called The Enchanted Castle, which had been out.

And now yesterday The Enchanted Castle had come in, and they took it out, and Jane, because she could read fastest and loudest, read it out loud all the way home, and when they got home she went on reading, and when their mother came home they hardly said a word to her, and when dinner was served they didn’t notice a thing they ate. Bedtime came at the moment when the magic ring in the book changed from a ring of invisibility to a wishing ring. It was a terrible place to stop, but their mother had one of her strict moments; so stop they did.

And so naturally they all woke up even earlier than usual this morning, and Jane started right in reading out loud and didn’t stop till she got to the end of the last page.

There was a contented silence when she closed the book, and then, after a little, it began to get discontented.

Martha broke it, saying what they were all thinking.

“Why don’t things like that ever happen to us?”

“Magic never happens, not really,” said Mark, who was old enough to be sure about this.

“How do you know?” asked Katharine, who was nearly as old as Mark, but not nearly so sure about anything.

“Only in fairy stories.”

“It wasn’t a fairy story. There weren’t any dragons or witches or poor woodcutters, just real children like us!”

They were all talking at once now.

“They aren’t like us. We’re never in the country for the summer, and walk down strange roads and find castles!”

“We never go to the seashore and meet mermaids and sand fairies!”

“Or go to our uncle’s, and there’s a magic garden!”

“If the Nesbit children do stay in the city it’s London, and that’s interesting, and then they find phoenixes and magic carpets! Nothing like that ever happens here!”

It was Martha who said this, and the others turned on her.

Because of course the only way pretending is any good is if you never say right out that that’s what you’re doing. Martha knew this perfectly well, but in her youth she sometimes forgot. So now Mark threw a pillow at her, and so did Jane and Katharine, and in the excitement that followed their mother woke up, and Miss Bick arrived and started giving orders, and “all was flotsam and jetsam,” in the poetic

“Half Magic is a funny, charming, timeless book, as much a pleasure to read to a child now as it was forty years ago. Those who had it read to them then may even have an obligation to pass on the pleasure.”  —New York Times Book Review 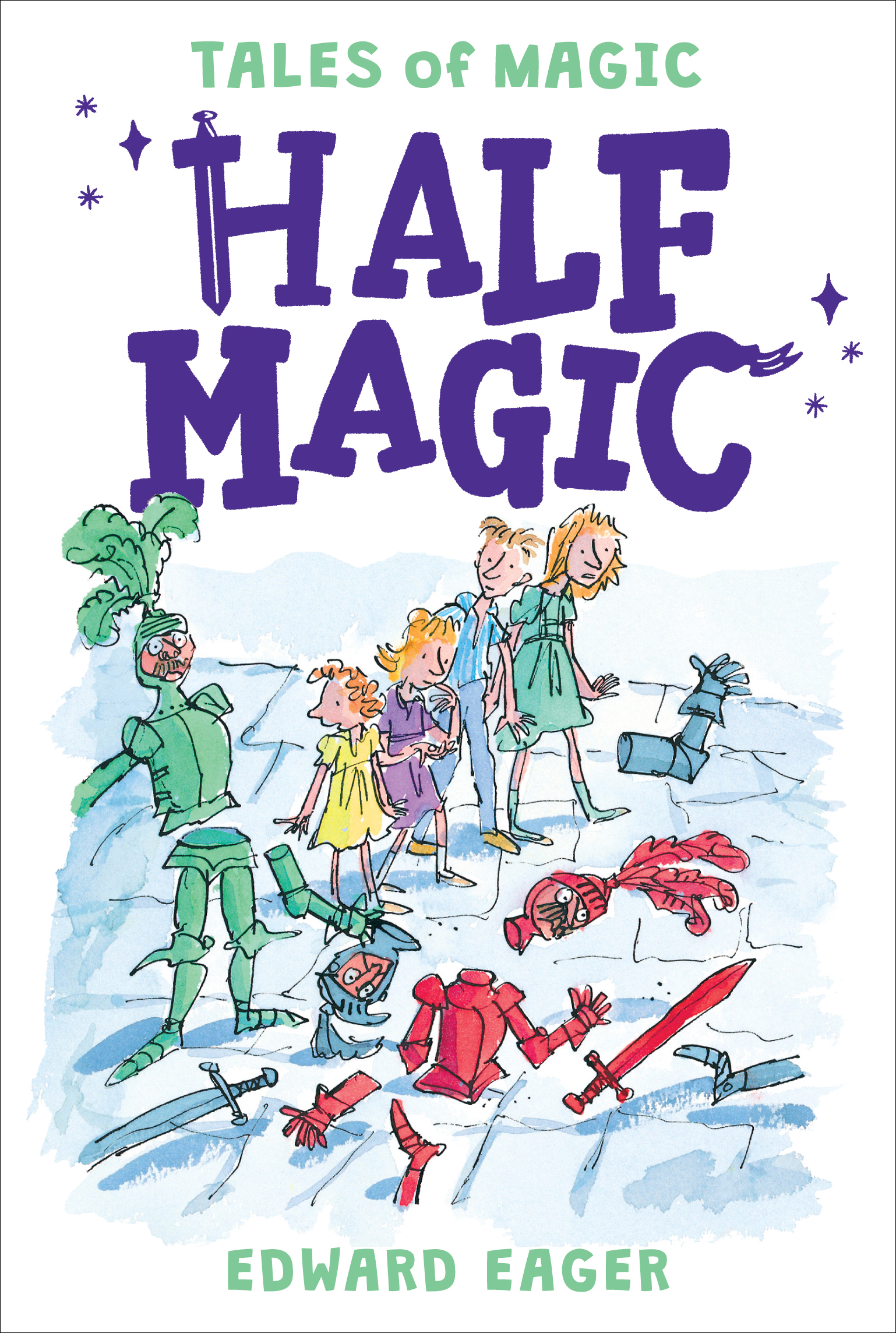