It was the dark of early morning; seventeen-year-old Lynne Cox was swimming her last half mile back to the pier after a long workout when she became aware that something was swimming with her. The ocean was charged with energy as if a squall was moving in; whatever it was felt large enough to be a white shark coursing beneath her body. In fact, it was a baby gray whale. Lynne quickly realized that if she swam back to the pier, the young calf would follow her to shore and die from collapsed lungs. On the other hand, if Lynne didn’t find the mother whale, the baby would suffer from dehydration and starve to death. Something so enormous—the mother whale would be at least fifty feet long—suddenly seemed very small in the vast Pacific Ocean. This is the story—part mystery, part magical tale—of what happened.

About the author
Lynne Cox

LYNNE COX has set records all over the world for open-water swimming. She was named a Los Angeles Times Woman of the Year, inducted into the International Swimming Hall of Fame, and honored with a lifetime achievement award from the University of California, Santa Barbara. She is the author of Swimming to Antarctica, which won an Alex Award. She lives in Los Alamitos, California.

There’s something frightening, and magical, about being on the ocean, moving between the heavens and the earth, knowing that you can encounter anything on your journey.

The stars had set. The sea and sky were inky black, so black I could not see my hands pulling water in front of my face, so black there was no separation between the sea and the sky. They melted together.

It was early March and I was seventeen years old, swimming two hundred yards offshore, outside the line of breaking waves off Seal Beach, California. The water was chilly, fifty-five degrees and as smooth as black ice. And I was swimming on pace, moving at about sixty strokes per minute, etching a small silvery groove across the wide black ocean.

Usually my morning workouts started at 6 a.m., but on this day, I wanted to finish early, get home, complete my homework, and spend the day with friends, so I had begun at 5 a.m.

There were vast and silent forces swirling around me: strong water currents created by distant winds and large waves, the gravitational pull of moon and sun, and the rapid spinning of the earth. These currents were wrapping around me like long braids of soft black licorice, and I was pulling strongly with my arms, trying to slice through them.

As I swam, all I heard were the waves, rising and tumbling onto shore, the smooth rhythm of my hands splashing into the water, the breaths that I drew into my mouth and lungs, and the long gurgling of silvery bubbles rolling slowly into the sea. I slid into my pace, and I felt the water below me shudder.

It wasn’t a rogue wave or a current. It felt like something else.

It was moving closer. The water was shaking harder and buckling below me.

All at once I felt very small and very alone in the deep dark sea.

Then I heard a sound. I thought it was coming from the ocean’s depths.

At first it seemed to be a whisper, then it grew louder, steadily, like someone trying to shout for help but unable to get the words out. I kept swimming and trying to figure out what was happening.

The sound changed. It became stranger, like the end of a scream.

In my mind, I quickly went through a list of the ocean sounds I knew and compared them with what I was hearing. There were no matches.

The hairs on my arms were standing straight out.

Whatever it was, was moving closer.

The ocean was charged with energy. It felt uncertain and expectant, like the air just before an enormous thunderstorm. The water was electric.

Maybe that was it; maybe the water was warning of an approaching squall. Maybe energy from distant winds and torrential rains was being transmitted through the water.

"Don’t believe in interspecies communication? Grayson, author Cox’s moving memoir about the lost baby whale she encountered when she was 17, just might change your mind."--People

"An account of courage and adventure artfully rendered with the joy, wonder, and suspense it deserves."—The Boston Globe

"A riveting adventure celebrating the mysterious bond between a champion swimmer and one wayward calf."--Elle

"Together [Cox and Grayson] journey to the eventual mother-and-child reunion through a fantastical world of giant ocean sunfish, bat rays with five-foot wingspans and a school of dolphins."—The New York Times 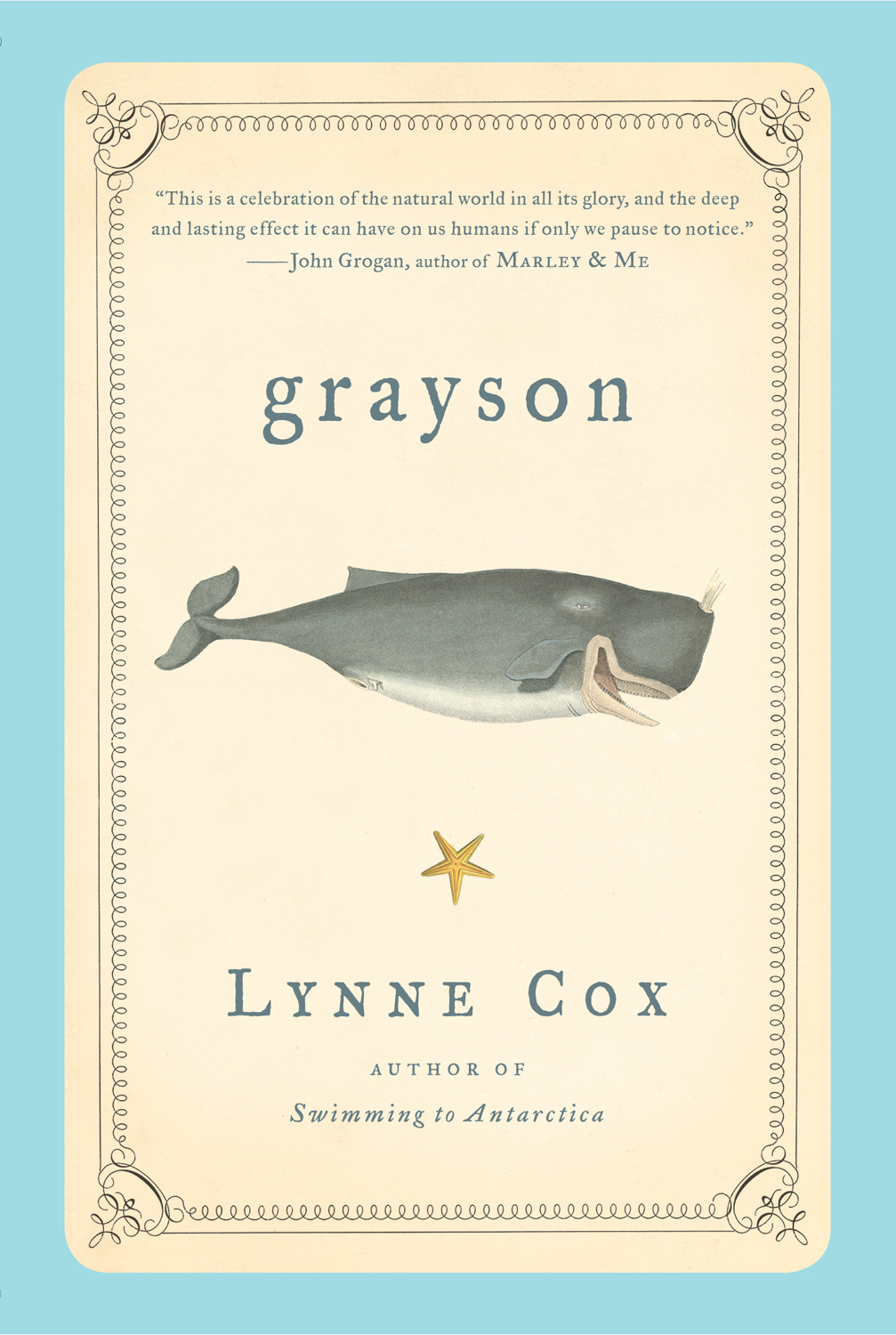