Girl on a Plane

This is a fictionalized story inspired by the amazing real life experiences of Miriam Moss, a fifteen year old English school girl who was held hostage on a plane hijacked by the Palestinian Liberation Front in 1970. Thrilling, gripping, true to life, and a heart-in-mouth adventure, you won't be able to put this survival story down.

After a summer spent with her family, fifteen-year-old Anna is flying back to boarding school in England when her plane is hijacked by Palestinian terrorists and taken to the Jordanian desert.

Demands are issued. If they are not met, the terrorists will blow up the plane, killing all hostages. The heat becomes unbearable; food and water supplies dwindle. All alone, Anna begins to face the possibility that she may never see her family again.

Inspired by true events in the author’s life, this is a story about ordinary people facing agonizing horror with courage and resilience. Includes Q&A with the author.

About the author
Miriam Moss

Miriam Moss was born in England but grew up in Africa, China and the Middle East and now lives in East Sussex with her family. In 1970, on her way back to boarding school in the UK, her plane was hijacked by Palestinian terrorists. Girl on a Plane is her story. Visit her website at http://miriammoss.com/

A Forces child, that’s what they call me.

It’s all I’ve ever known: living in rented houses and moving every few years to a different country. So being here in Bahrain, on this small teardrop of an island in the Persian Gulf, feels normal.

Moving so often means leaving friends, starting new schools halfway through the term, and being the new girl over and over again. Catching up with schoolwork can be a struggle too, so when I was eleven, my parents decided to send me to boarding school back in England. Now I travel out to see them for the holidays, when they can afford it.

My dad’s in the army. And my mother, who I’ve always called Marni, is a primary-school teacher.

It’s the last day of the summer holidays, and tomorrow I’m leaving Bahrain forever because we’re moving again. My two younger brothers are traveling back to school a couple of days after me, and my parents will go at the end of the week. Dad’s been stationed back in England for a while. We won’t be coming out to Bahrain again.

I’m supposed to be packing, but I refuse to engage. I’m staying put, right here on the roof, lying in the shade next to Woofa, our dog, and stroking his golden ears. He is looking at me with puzzled, toffee-colored eyes that say, So how come I’m suddenly allowed up here?

The house roof is flat, with a chest-high wall around it. It’s where we all come to catch the breeze. And on unbearably hot nights, we’re even allowed to sleep up here. Then the light in the pink sky and the doves cooing in the date palms and the muezzin calling everyone to prayer wake us early. By seven the sun’s so hot, you have to go back inside anyway.

The walls were once painted a blinding white. Now they’re smudged and pockmarked from the blows of endless cricket and soccer balls, especially around the goalmouth and the stumps my father painted on for the boys. The only things left up here now, stacked against the wall, are two green sun loungers. When you open them up, the sharp cogs pinch your fingers and the metal frame burns your bare skin.

Woofa is sending me waves of sympathy, as only dogs can. He knows that all I have to look forward to now are school and exams. He knows we’re leaving. He’s known for a while. He attached himself to our family after being abandoned by his previous one, so he’s seen it all before.

I lift one of his ears. The inside looks like curled pasta. “You’ll be all right, Woofa,” I say. “You only have to move next door this time, to live with the Adelmans. They’re really nice.” Mrs. Adelman is American and once taught me how to make cookies, half-plain, half-chocolate, in a roll that you cut into slices before baking.

Oh dear. Marni. I put my arms around Woofa’s neck and bury my face in the thick fur of his ruff, but then, hearing my mother’s footsteps on the stairs, I get up quickly.

“There you are!” Her eyes slide down to rest on Woofa. “Oh, Anna,” she says. Woofa sidles guiltily past her and down the stairs. “You,” she says to me, “are very naughty.” Her frown is disapproving, but her dark eyes don’t mean it.

“I know.” I smile at her. “I am.” She puts a firm arm around my shoulders, turns me, and gently guides me down the stairs in front of her.

But I still don’t go to pack. I sit down at the dining room table beside Sam, my nine-year-old brother. He’s drawn what I think is a hippo and is coloring it in purple.

“Anna?” Marni says as I settle down next to him.

“I’ll go in a minute. I promise,” I say. “That’s really good, Sam.” He goes on, concentrating, the tip of his tongue between his lips. The overhead fan whooshes the smells of wood chip and furniture polish around the room and flutters the pile of newspapers that Marni’s using to wrap up the glasses. She picks up a water jug, rolls it in Arabic newsprint, and packs it carefully into the silver foil-lined crate. She’s done this so many times before. Her brown hands move quickly, her engagement ring catching the light.

“At the party last night,” I say, “they said loads of planes have been hijacked.” My words hang in the air. The date-palm fronds finger the windowpane as if they’re trying to get in.

Marni rips a sheet of newspaper in half. “Ignore them,” she says. “They’re just trying to unsettle you before you fly.”

“No, Marni, they really have,” I insist. “Everyone was talking about it. They were all teasing me, saying it’d be my turn tomorrow. It was quite funny, really . . .”

Marni looks straight at me, her eyes intense. What Dad calls her still waters run deep eyes. “Well, you aren’t going to be hijacked.”

She reaches for the yellow and terracotta vase they bought in Venice on their honeymoon and starts wrapping it.

“Anna!” Marni shoots me a look.

“What does hijacked mean?” Sam pipes up, pulling a black crayon from the box and scribbling on a whiskery tail.

“Anna’s being silly, darling. It hardly ever happens, and usually no one gets hurt.”

“It’s when people hold up a plane to make it go somewhere else,” she says. Then she turns to me. “Now, have you got enough envelopes to write home with?” I don’t respond to this unsubtle attempt to get me to pack. I want to see if she’ll say, Anna, it’s time to gird up your loins. Or her favorite: Anna, I’m going to have to put a bomb under you. But it’s neither. She just says, “How much pocket money do you think you’ll need this term?” And that’s when I know she’s heard about the hijackings too. She’s thinking that we all have to fly this week and doesn’t want us to be worried about it, especially me, as I’ll be traveling alone. Anyway, she said it hardly ever happens, so I suppose I’ll probably be fine.

She tries another tack. “You know Dad brought your school uniform back from the cleaner’s when he came home for lunch?” She pauses. “It’s on your bed, ready to pack.”

"The accounts of terrorism during the 1970s are just as real as they are today, and teens will love this real-life account.  This title is highly recommended for both middle and high school collections."

"This is an intense, realistic, and absolutely gripping story ..."

"A unique glimpse into a pivotal point in world history."

"Historical fiction readers and lovers of history in general will enjoy this title about a time not often written about. It would make a good addition to a middle grade or young adult collection." 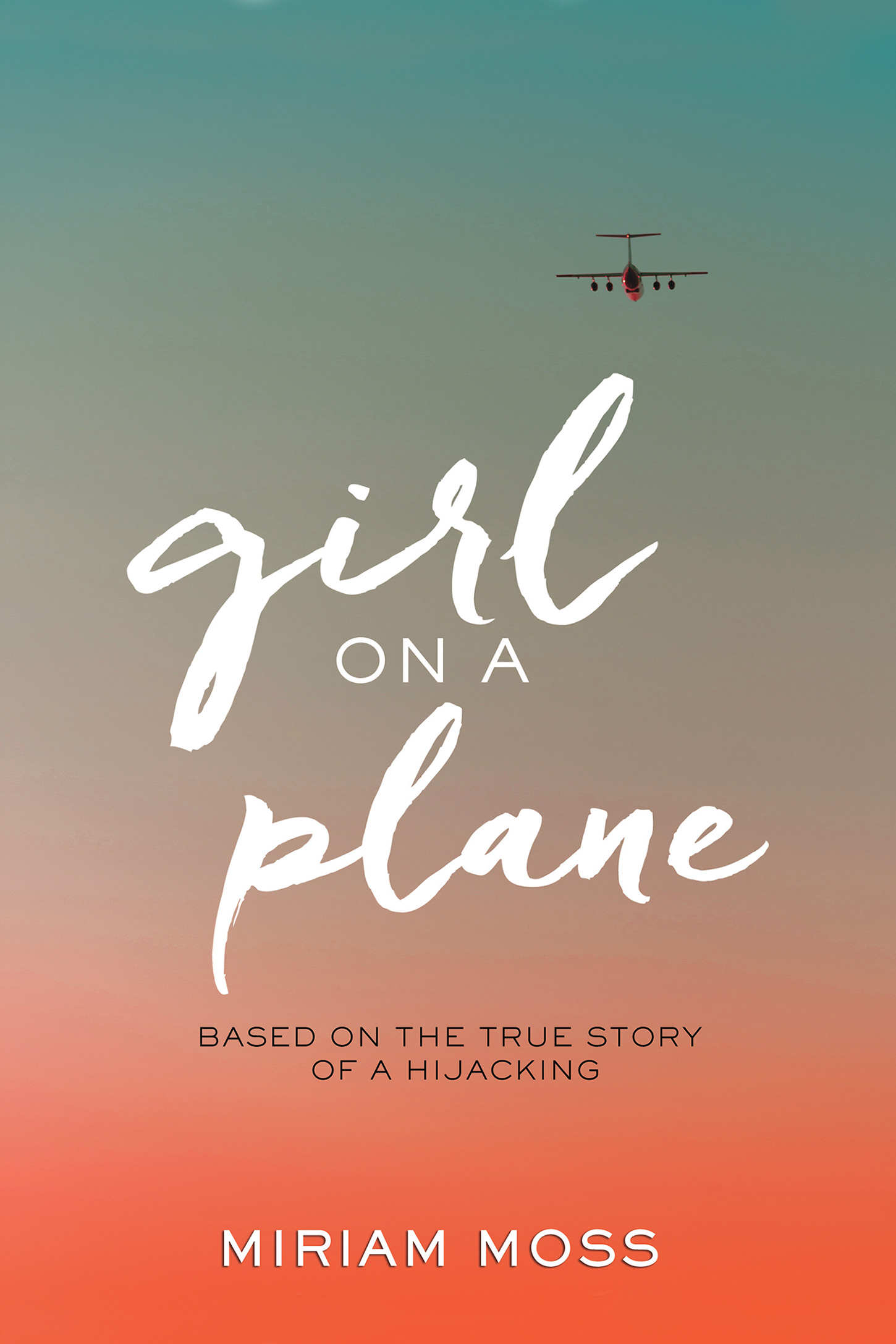