Ghost Fleet: A Novel of the Next World War

An acclaimed technothriller that envisions a high-tech war between America and China—a near-future conflict made all the more chilling by the real-world research that undergirds it.

"A novel that reads like science fiction but bristles with rich detail about how the next World War could be fought." —Vice

“A modern-day successor to tomes such as The Hunt for Red October from the late Tom Clancy.” –USA Today

Ghost Fleet is a page-turning imagining of a war set in the not-too-distant future. Navy captains battle through a modern-day Pearl Harbor; fighter pilots duel with stealthy drones; teenage hackers fight in digital playgrounds; Silicon Valley billionaires mobilize for cyber-war; and a serial killer carries out her own vendetta. Ultimately, victory will depend on who can best blend the lessons of the past with the weapons of the future. But what makes the story even more notable is that every trend and technology in book—no matter how sci-fi it may seem—is real.

The debut novel by two leading experts on the cutting edge of national security, Ghost Fleet has drawn praise as a new kind of technothriller while also becoming the new “must-read” for military leaders around the world.

“Ghost Fleet is a thrilling trip through a terrifyingly plausible tomorrow. This is not just an excellent book, but an excellent book by those who know what they are talking about. Prepare to lose some sleep.”—D. B. Weiss, writer of HBO’s Game of Thrones

About the author
P. W. Singer

P. W. SINGER is an expert on twenty-first-century warfare. His award-winning nonfiction books include the New York Times bestseller Wired for War.

AUGUST COLE is a writer and analyst specializing in national security issues and a former defense industry reporter for the Wall Street Journal.

"It is the kind of book that can educate and provide food for thought to a national security geek (not to mention the general public) as to some of the latest technical developments and their warfighting implications - and provide an excellent tool to research them, to boot.  In lawyerly professional terms, it’s the sort of book that helps a lawyer understand the ‘client’s’ thinking."--LawFareBlog.com

"Ghost Fleet is what Call of Duty would be like if it put on a tie and went to Capitol Hill."--Playboy

"A harrowing, realistic future of world war...Ghost Fleet also comes with hundreds of footnotes explaining how every single military technology, 'sci-fi' weapon and geopolitical trend mentioned in the book is grounded in reality. That's why, rather than simply a good read, Ghost Fleet can come across as a 400-page warning."--Wired

"When two experts on modern warfare get together to write fiction I get in line to read it...summer is fading fast and August approaches. Get Ghost Fleet to read on the beach."--Forbes

"Its often jaw-dropping explorations of how new technologies might be used should make this book required reading for all military personnel...Ghost Fleet is the best techno-thriller since Red Storm Rising."--War on The Rocks

"If colleges ever decide to offer courses on first-person shooter video games like Call of Duty and Battlefield, they should use the novel Ghost Fleet as the primary textbook.”--Forbes

“It’s easy to see why “Ghost Fleet” has captured the imaginations of foreign policy experts in the U.S. and abroad. The techno-thriller, by P.W. Singer and August Cole, not only tells a crackling-good story but also casts light on the warnings that have come from many quarters about the risks of offshoring U.S. defense procurement....A perfect summer read. If what you like is edge-of-the-seat action, you’ll have trouble putting it down. And even if thrillers aren’t your thing, the book will well repay a read, if only for the disturbing questions it raises.”--BloombergView

"Ghost Fleet is a strangely satisfying blend of storytelling and strategy, of fiction and non-fiction. In an era where most people prefer not to think about all the horrible things that could go wrong in the world, it's good to know that there are writers like Singer and Cole who not only think about them, but also do so in a readable and enjoyable style."--Huffington Post

"Beyond fast and fun reading, Ghost Fleet’s biggest draw is its unified, multi-domain vision of future warfare...the result is a vibrant vision of conflict in the information age—and hopefully the closest we’ll get to the real thing."--Business Insider

"Fascinating...Though it is fiction, the authors have taken great pains to keep their storytelling realistic....Ghost Fleet has a certain weight. Cole and Singer are so steeped in future wars that they depict the fighting — on the ground, in space and on the Internet –with an air of indisputable authority....Ghost Fleet is full of wonderful moments. It’s got space pirates, drug-addled hackers out of a William Gibson novel and American insurgents fighting occupation in Hawaii. Cole and Singer make these fantastical elements work, and weave them into the story."--Reuters

“Its like the Battlestar Galactica reboot meets Band of Brothers meets Hunt for Red October meets Call of Duty.”--Yahoo! News

"A novel that reads like science fiction but bristles with rich detail about how the next World War could be fought."--Vice

"With their new techno-thriller, Ghost Fleet, Peter Singer and August Cole take an unexpected twist on the classic Clancy formula, producing a book that is equal parts science fiction and science fact...The book is a ‘must read’, the kind of book you read in a day and relentlessly turn page after page."--Medium.com

"Ghost Fleet is not only a riveting novel, it is science fiction at its best. It helps us ask the right questions about our future - questions the answers to which might help us take advantage of technology while minimizing risk to humanity."--H. R. McMaster, Author, Dereliction of Duty, Lt General, US Army, Director, Army Capabilities Integration Center and Futures, U.S. Army Training and Doctrine Command

"It’s Tom Clancy for the twenty-first century, a rip-roaring, “near-futuristic” thriller...The book is peppered with real-life military facts and figures, but it moves so briskly you may hardly notice that you’re learning as you go."--Council on Foreign Relations

"Ghost Fleet Nails The Perfect Vision of World War III...a futuristic techno-thriller that’s as plausible as it is entertaining. Make no mistake, however, this is no technical slog — it’s a highly readable and engaging thriller that sets a new standard for techno-thrillers."--io9

"Singer and Cole have crafted an eminently readable novel, which is both highly entertaining and sobering. If you have ever wondered how today's tech trends might affect future conflicts there is no doubt about it; you will want to read this book."--Small Wars Journal

"A ripped from the headlines novel about war that’s just around the corner...Exciting."--Buzzfeed

"An absolute pleasure to read. It contains much of the same storytelling as a work by someone like Tom Clancy, but with an intensity, depth of knowledge, and vision infrequently found in those books. It is an expansive work in its scope, and one that will undoubtedly retain its relevance for years to come....Ghost Fleet is an enjoyable book. It is a fun book. What’s more, it is an insightful and prescient book, without forcing the reader to ever acknowledge that fact."--Medium.com

“Ghost Fleet is a gripping account of an all-too-possible future where America has lost its technological edge and US-China relations have deteriorated to the point of war. Although American decline and US-China conflict are by no means inevitable, this exciting techno-thriller provides an ominous warning of what might be coming our way if the forces of disorder get the upper hand.” -Jamie Metzl, author of Genesis Code and The Depths of the Sea

"Tom Clancy fans will relish Singer and Cole’s first novel, a chilling vision of what might happen in a... 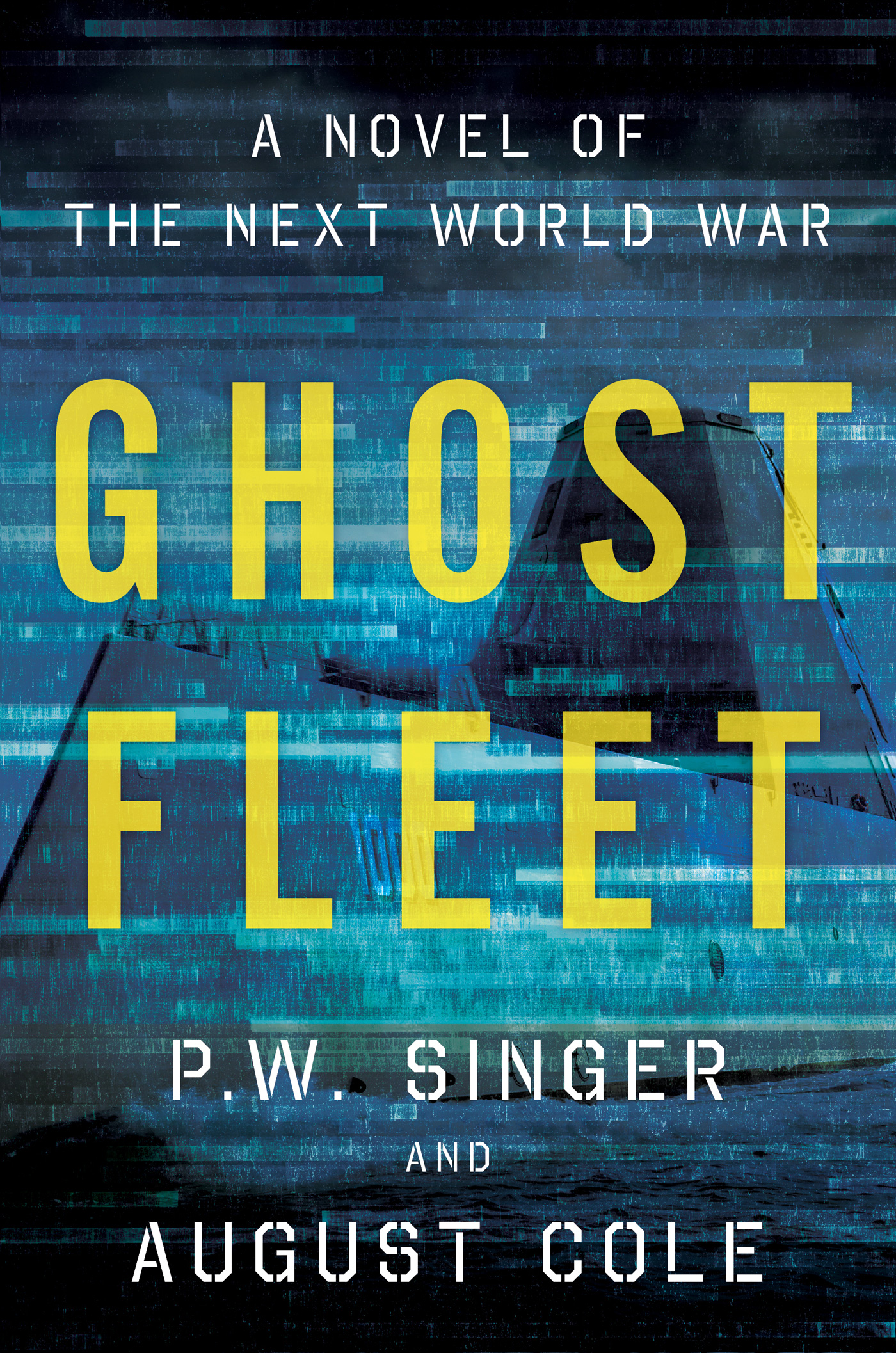