Once Cadel was going to take over the world. Now he's stuck in foster care.

Now that the Axis Institute for World Domination has been blown up; the founder, Dr. Phineas Darkkon, has died; and Prosper English (who enrolled Cadel in the first place) is in jail for myriad offenses, Cadel Piggott has round-the-clock surveillance so he'll be safe until he testifies against Prosper English. But nobody seems to want Cadel. Not Fiona, his social worker; not Saul Greeniaus, the detective assigned to protect him.

When he is approached by the head of Genius Squad--a group formed to investigate GenoME, one of Darkkon's pet projects--Cadel is dubious Genius Squad can offer him a real home and all the technology his heart desires. But why can't he bring himself to tell Saul what the group is really up to? And how can Genius Squad protect Cadel once Prosper English breaks out of jail?

Catherine Jinks grew up in Papua New Guinea and now resides in New South Wales, Australia. She is a three-time winner of the Children's Book Council of Australia Book of the Year award and has received the Centenary Medal for her contribution to Australian children's literature. Her popular works for young readers include the Evil Genius series, The Reformed Vampire Support Group, and the trilogy that began with How to Catch a Bogle. Visit her website at www.catherinejinks.com.

Cadel was in a very sour mood when he first met Detective Inspector Saul Greeniaus.

The day had started badly. To begin with, Cadel had been woken up at 3:00 a.m. by the sound of piercing screams coming from Janan’s bedroom. Though only six years old, Janan had the lung capacity of a whale. He also suffered from night terrors, and the combination was deadly. Cadel usually felt sorry for Janan, who had been living in foster homes for most of his life. But it was hard to sympathize with anyone at three o’clock in the morning, let alone a kid who could scream like a hysterical gibbon.

As a result of his interrupted sleep, Cadel was late for breakfast. Not that it mattered. He didn’t have to go to school, so Mr. and Mrs. Donkin never insisted that he be awake at a specific time. But Mace and Janan did attend school, and were finishing their eggs just as Cadel arrived in the kitchen. Had Cadel been feeling more alert, he would never have sat down to eat just then. He would have waited until Mace was out of the house and running to catch the bus, his gray shirt untucked and his thick legs pumping.

Had Cadel used his brain, he would have sensed trouble in the air, and tried to head it off.

The whole problem was that he couldn’t protect his own bedroom. There was a house rule about always knocking first, and another rule about respecting privacy. These rules were written in beautiful script on a piece of handmade paper that was pinned to the door of the pantry cupboard. (Hazel had done an evening course in calligraphy.) But both rules were quite easy to break, because Hazel had banned locks and keys from the Donkin premises.

Cadel could understand her point of view. One of her previous foster sons had locked himself in his bedroom before trying to set it alight. Leslie, her husband, had then been forced to smash through the door with a hammer. So although Hazel continuously said nice things about sharing, and everyone “always being welcome everywhere,” Cadel felt sure that her open-door policy was rooted in fear. She was afraid of what might happen if, during an emergency, she couldn’t reach any of the kids in her charge.

This was certainly Fiona’s opinion. Fiona Currey was Cadel’s social worker. She had told Cadel about the locked bedroom incident, after Cadel had finally complained to her about Mace, who liked to mess around with other people’s possessions. It was pointless complaining to Hazel, as Cadel had discovered. Her answer to every problem was what she called a “family conference.”

“I’m sorry, Cadel,” Fiona had said. “I know it must be hard, but it won’t be forever. Just hang in there. Mace isn’t nearly as bright as you are; surely you can handle him for a little while? Until things are sorted out?”

Most people seemed to jump to the same conclusion about Mace, whose real name was Thomas Logge. They thought that he was stupid. They looked at his lumbering form, his vacant grin, and his clumsy movements, and they made allowances. They heard his slow, awkward speech patterns and dismissed him as a big dumb kid. Whenever he smashed something, they called it an accident; cracked windows and broken doorknobs were explained away. Mace, they said, had badly underdeveloped fine motor skills for a fourteen-year-old. He didn’t know his own strength. He might have poor impulse control, but he wasn’t malicious. He wasn’t clever enough to be malicious.

Only Cadel had doubts about this interpretation of Mace’s conduct. In Cadel’s opinion, Mace was a lot smarter than he let on. Not brilliant, of course, but cunning. Had he been as stupid as everyone made out, Mace wouldn’t have been so quick to take advantage of the few minutes granted to him while Cadel was eating breakfast.

When Cadel returned to his room, he found his mattress wet and stinking.

“No, I didn’t!” That was another thing about Mace; he had perfected the art of sounding completely clueless. “I did not! He’s blaming me because he wet his bed!”

“Did you really wet your bed, Cadel?” asked Janan, who wet his own bed all the time. He sounded pleased—even excited—to discover that someone else shared his problem. Especially someone who had recently turned fifteen.

“There’s nothing wrong with wetting the bed,” Hazel assured them all, in soothing tones. “I have plastic covers on the mattresses, and I can easily wash the sheets. You don’t ever have to feel bad about wetting the bed.”

“I don’t feel bad,” said Cadel, through his teeth. “Because I didn’t wet it. Mace did.”

“Then why are my pajamas bone dry?” asked Cadel, holding them up for inspection. Mace blinked, and Hazel looked concerned. She never frowned; her wide, plump face wasn’t built for frowning. In situations where other people might have worn grim or angry expressions, Hazel merely looked concerned, dismayed, or disconcerted.

“He probably didn’t even wear his pajamas,” Mace remarked cheerily, demonstrating once again—in Cadel’s opinion—that he wasn’t as thick as everyone assumed.

“Those pajamas were clean last night,” Cadel pointed out, trying to stay calm. “Hazel, you gave them to me, remember? Do they smell as if I’ve worn them?”

Hazel took the pajamas. She put them to her small, round nose. Cadel knew that when it came to laundry, Hazel had the nose of a bloodhound. After bringing up four children and twelve foster children, she was thoroughly trained in the art of distinguishing dirty garments from clean ones.

A single sniff was all that it took. She turned to Mace, looking disappointed.

“Because you know what I’ve said about this, Thomas. Sometimes we feel angry and frustrated, and do things we’re ashamed of. Then we lie about them afterward, to protect ourselves. But most of the time, there’s no need to lie. Because it’s the lie that people find hard to forgive, not the offense . . .”

Cadel took a deep breath, willing himself to be patient. Hazel, he knew, was a really, really nice person. He admired her selflessness. He was grateful to her for cooking his meals, washing his clothes, and letting him use her computer.

But she was also driving him mad. Sometimes he could understand why Janan threw such terrible tantrums. Cadel was often tempted to throw one himself, after sitting through yet another gentle, stumbling lecture on why it was important not to kick a football at somebody’s face. He had to make allowances; he realized that. No doubt Hazel was used to dealing with kids who didn’t grasp how wrong it was to throw large, heavy objects at people. Or spit in their food. Or piss in their beds.

All the same, he found it hard not to lose his temper. Because Mace, he knew, needed no reminding about the proper way to behave. That dumb act was all a front.

“Okay, okay,” Mace finally conceded. It seemed that he, too, could only stand so much of Hazel’s well-meaning counsel. “I did it. I was joking. Can’t you take a joke?” 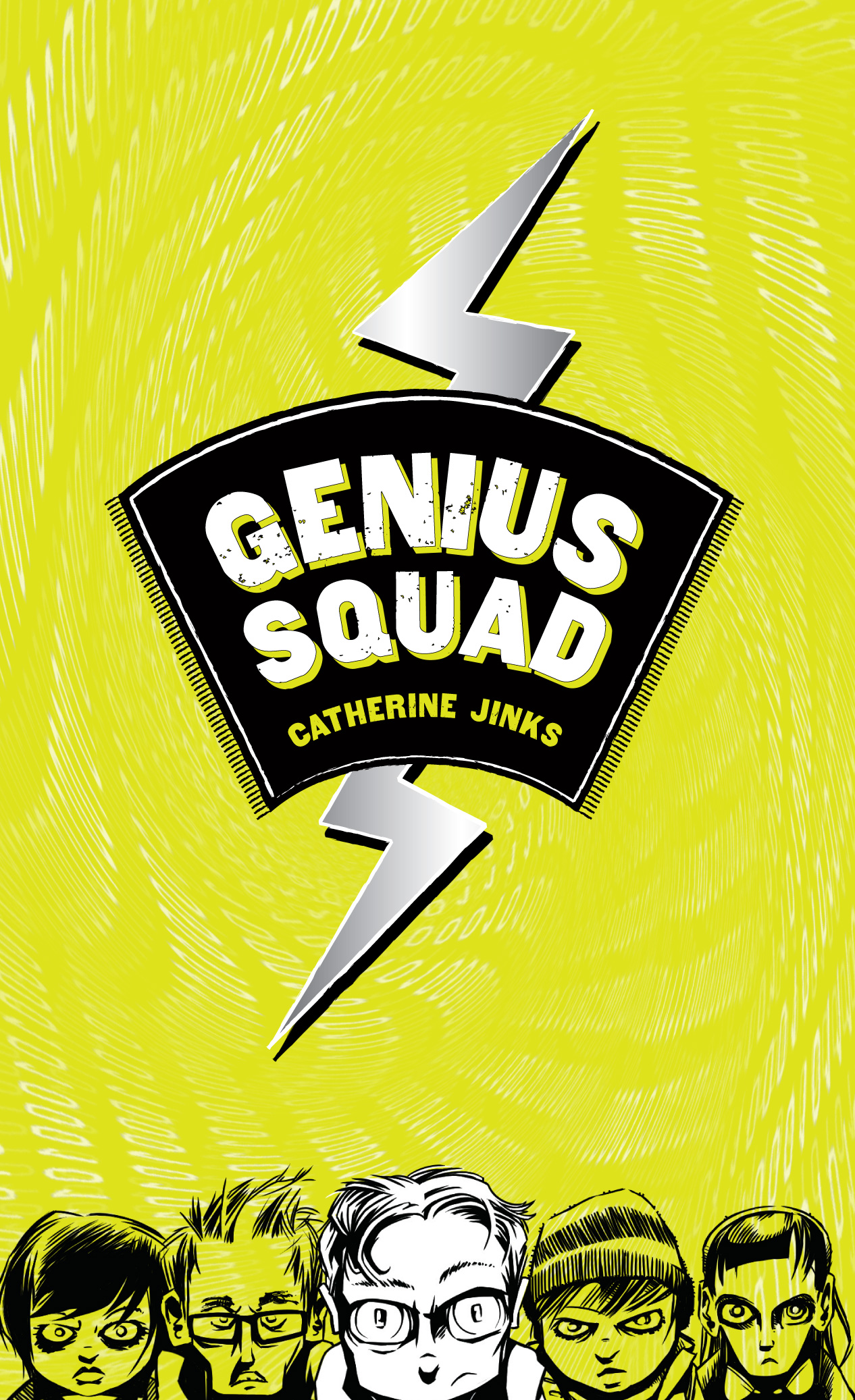