From Russia with Lunch: A Chet Gecko Mystery

Inventions, spells, and bullies—oh my!

It all begins when Chet’s favorite teacher is fired, only to be replaced by the mechanical invention of Dr. Tanya Lightov—a mysterious Russian scientist.
Suddenly, the school seems possessed by forces that are upsetting the natural order of things: Kindergartners are beating up sixth graders; teachers’ pets are talking back; and worst of all, Chet’s faithful partner and best friend, Natalie Attired, has abandoned him in his hour of need.
Will Chet be able to restore his friendship with Natalie and bring Emerson Hicky back to normal? One thing’s for certain: The crazy, mixed-up mastermind behind this case will be the last creature anyone expects.

Inventions, spells, and bullies—oh my!

It all begins when Chet’s favorite teacher is fired, only to be replaced by the mechanical invention of Dr. Tanya Lightov—a mysterious Russian scientist.
Suddenly, the school seems possessed by forces that are upsetting the natural order of things: Kindergartners are beating up sixth graders; teachers’ pets are talking back; and worst of all, Chet’s faithful partner and best friend, Natalie Attired, has abandoned him in his hour of need.
Will Chet be able to restore his friendship with Natalie and bring Emerson Hicky back to normal? One thing’s for certain: The crazy, mixed-up mastermind behind this case will be the last creature anyone expects.

All Booked Up I didn’t see it coming— not in the library. Library period is a cheery mountain hut on the long barefoot slog up Mount Everest that is a typical school day. You expect rest and recovery. You expect books and computers, maybe a little Dewey decimalizing. But you don’t expect mayhem and mystery. This particular library period, I was sitting on the matted green carpet with the rest of Mr. Ratnose’s fourth-grade class. We were waiting for Principal Zero to get to the point. ". . . And because of our school’s budget yada yada and fiscal blah blah blah," the big cat rumbled, "we’ve decided to take strong haminah-jaminah." Principal Zero was a tough but fair administrator with a massive gut and the sweet disposition of Ivan the Terrible with a toothache. But man, that kitty could gab. My attention wandered like a preschooler in a toy store. I eyeballed the draped shape beside the principal, as big as two refrigerators. (The shape, that is, not the principal.) Bo Newt leaned close and muttered, "Whaddaya think that is? A new soda machine?" "In the library?" I said. "Dream on, pal." "Shhh!" hissed Bitty Chu, teacher’s pet. Mr. Zero tossed a glare my way, but he didn’t stop flapping his gums. "And so to help with our cost cutting, we’ve hired an inventor." An inventor? My ears perked up. (Or they would have, if my ears hadn’t been just two holes in my head.) Inventor brought to mind Ben Franklin, Dr. Frankenstein, and other great men of science. I sat up straighter. "So let me introduce"— the burly tomcat paused dramatically— "Dr. Tanya Lightov." He clapped his paws together, leading the applause. A woodchuck in a white lab coat stepped out from behind the mysterious thingamabob. She was as stiff as a grasshopper Popsicle. Her furry cheeks were full and sleek, and her blue eyes were colder than a Siberian snowball. "A girl inventor?" I blurted. "Da," said Dr. Lightov. Shirley Chameleon poked me in the back. "Girls can do anything boys can, but better." "If you’re talking about spreading cooties at lightspeed," I said, "you’re right." This earned me another, harder poke. "Settle down," Mr. Zero growled. "Your class will be the first to see this new invention because Dr. Lightov is the aunt of your classmate Pete Moss." Every eye turned to Pete, who frowned and studied his toenails. If he weren’t completely covered by hair, he would’ve blushed redder than a cherry kissing a tomato. Here’s all you need to know about Pete Moss: If you take the world’s most average student and multiply by twelve— that’s Pete. He’d been in my class all year, and I barely knew the guy. "Peter, dahling," said Dr. Lightov, "vould you kindly help me?" The little brown groundhog shrugged. He looked like he’d rather perform dental surgery on a grizzly bear, but he rose and shuffled forward. His aunt told us, "Zhis machine vill automate all ze vork in ze library. Storytime, book selection, checkout— everyzhing." Bitty Chu’s hand shot up. "But what about our librarian, Cool Beans?" she asked. "What will he do?" Principal Zero cleared his throat. "He will be, ah, leaving us." "Leaving?" I said. "No way!" I turned to the huge possum leaning up against a bookshelf. He offered a sleepy smile. "Cool your jets, Jackson," said the librarian. "But what’ll you do?" I asked. "I’ll make the scene back in the bayou. Either banging the bongos in a jazz band or vampire hunting. Haven’t decided yet." No more Cool Beans? My jaw clenched. However nifty this invention might be, it wasn’t worth losing one of the school’s few decent teachers. But before I could protest, Dr. Lightov whipped the sheet off her invention. "Behold," she said, "ze amazing Bibliomalgamator!" "Ooh!" went my classmates. The gleaming silver contraption sported a bank of lights and switches and monitors. The doctor pressed a red button. Everything lit up and whirred. I hated to admit it, but it was pretty slick. "Ve insert ze books through zhis port," the woodchuck said. She and Pete lugged armloads of novels from a nearby shelf and slipped them one by one into a wide hole. "Zhen ve program ze readers’ choices on zhis keyboard," said Dr. Lightov. As Pete kept adding books, she asked several kids what they liked to read. "Mysteries," said Waldo the furball. "Romance," said Shirley. I shuddered. Jackdaw Ripper belched. "Anything with blood and guts in it," he said. The inventor’s fingers danced over the keyboard. She hit a blue button, and the machine went beep-boop-bop! Copyright © 2009 by Bruce Hale All rights reserved. No part of this publication may be reproduced or transmitted in any form or by any means, electronic or mechanical, including photocopy, recording, or any information storage and retrieval system, without permission in writing from the publisher. Requests for permission to make copies of any part of the work should be submitted online at www.harcourt.com/ contact or mailed to the following address: Permissions Department, Houghton Mifflin Harcourt Publishing Company, 6277 Sea Harbor Drive, Orlando, Florida 32887-6777.
Reviews 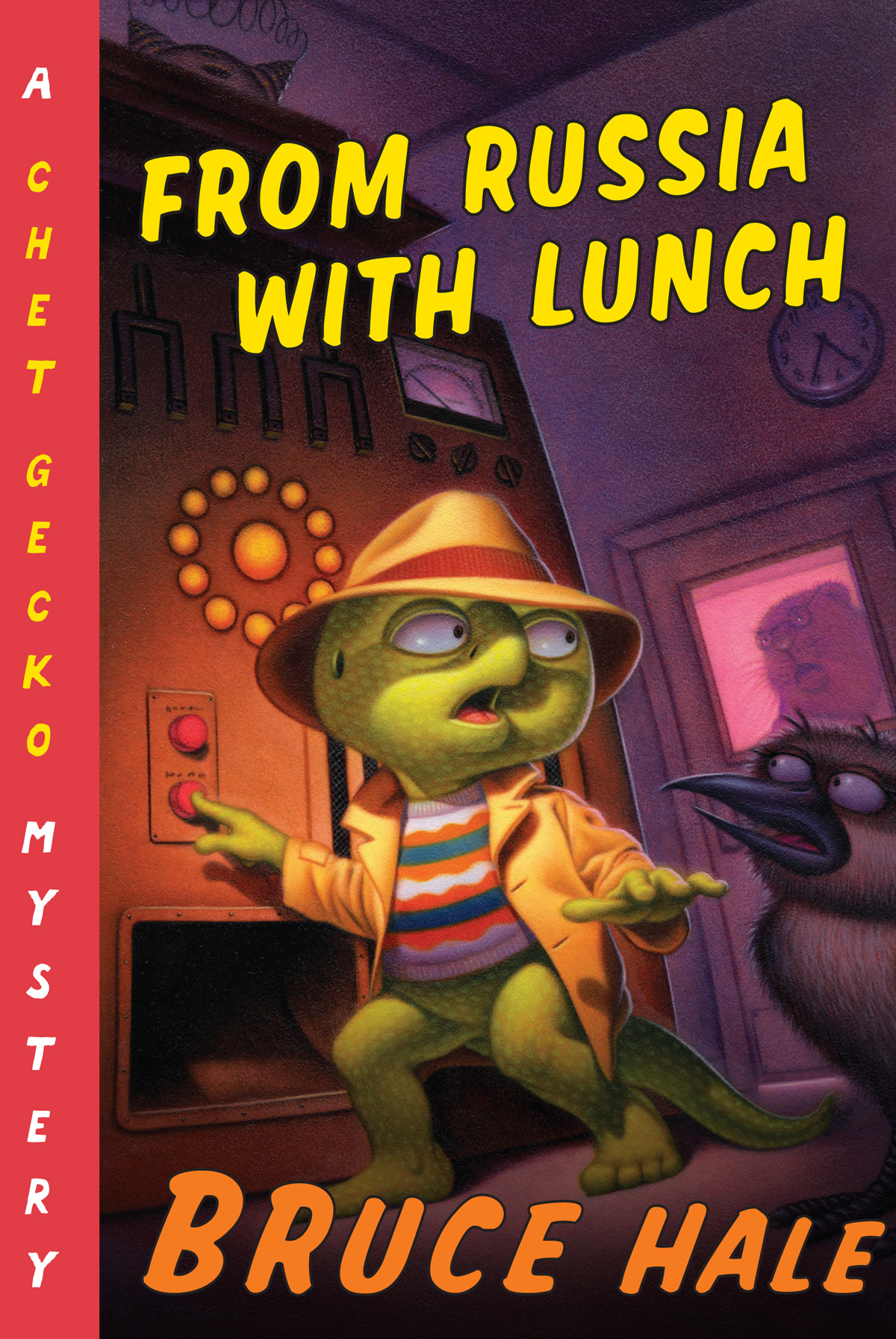