A wise and entertaining novel about a woman who has lived life on her own terms for seventy-five defiant and determined years, only to find herself suddenly thrust to the center of her family’s various catastrophes

Meet Florence Gordon, a blunt, brilliant feminist. At seventy-five, Florence wants to be left alone to write her memoir and shape her legacy. But when her son and his family come to visit, they embroil Florence in their dramas, threatening her coveted solitude. Marked with searing wit, sophisticated intelligence, and a tender respect for humanity, Florence Gordon is cast with a constellation of unforgettable characters. Chief among them is Florence herself, who can humble fools with a single barbed line, but who eventually finds that there are some realities even she cannot outwit.

“It’s such a cliché to say a book makes you laugh and cry, but this one does, in the deftest way.” — Emily Gould, Paste

About the author
Brian Morton

BRIAN MORTON is the author of four previous novels, including Starting Out in the Evening, which was a finalist for the PEN/Faulkner Award and was made into an acclaimed feature film, and A Window Across the River, which was a Book Club selection of the Today show. He teaches at New York University, the Bennington Writing Seminars, and Sarah Lawrence College, where he also directs the writing program. He lives in New York.

Florence Gordon was trying to write a memoir, but she had two strikes against her: she was old and she was an intellectual. And who on earth, she sometimes wondered, would want to read a book about an old intellectual?

Maybe it was three strikes, because not only was she an intellectual, she was a feminist. Which meant that if she ever managed to finish this book, reviewers would inevitably dismiss it as “strident” and “shrill.”

If you’re an old feminist, anything you say, by definition, is strident and shrill.

She closed her laptop.

Not much point, she thought.

But then she opened it up again.

She didn’t feel strident or shrill. She didn’t even feel old.

And anyway, old age isn’t what it used to be — or at least that’s what she kept telling herself.

This was her reasoning. Florence was seventy-five years old. In an earlier era, that would have made her an old lady. But not today. She’d been a young woman during the 1960s, and if you were young in the sixties — “bliss was it in that dawn to be alive” — there’s a sense in which you can never grow old. You were there when the Beatles came to America; you were there when sex was discovered; you were there when the idea of liberation was born; and even if you end up a cranky old lady who’s proud of her activist past but who now just wants to be left alone to read, write, and think — even if you end up like that, there’s something in your soul that stays green.

She wasn’t — this seems important to say — a woman who tried to look younger than she was. She didn’t dye her hair; she had no interest in Botox; she didn’t whiten her teeth. Her craggy old-fashioned teeth, rude and honest and unretouched, were good enough for her.

She wasn’t a woman who wanted to recapture her youth. In part this was because she found the life she was living now so interesting.

So she was a strong proud independent-minded woman who accepted being old but nevertheless felt essentially young.

Tonight she had finally begun, she thought, to crack the code. She’d remembered a moment that she hadn’t thought about in years. It was just a moment, not important in itself. But precisely because she hadn’t thought about it in so long, she was able to remember it now with a sense of freshness, and she was hoping she might have finally found the door that would lead her back into the past.

She was glad that she was free for the rest of the night. It was seven o’clock on a Friday in early May; she was through with her academic obligations and her mind was clear. And this evening, in which she’d finally, finally, finally, begun to make some progress — this evening was the happiest one she’d had in a long time.

Except that Vanessa kept calling.

Her friend Vanessa kept calling, and Florence kept not picking up. After the fifth call, she thought that Vanessa might be in some sort of trouble, and on the sixth, she finally answered.

“Nothing big. Nothing terrible. It’s just that I got pickpocketed, evidently, and I don’t have anything except my phone. I need some money to get back home.”

“That’s why I called you. I’m three blocks away.”

She named a restaurant.

“That’s nice of you. But it’s a little bit complicated.”

“The people I was having dinner with had to run, and I stayed to pay the check, and that’s when I found out my purse was gone. So the owner doesn’t want me to leave. He wants to be sure I’m not going to skip out on him.”

People, Florence thought as she put on her shoes. What do I need them for again?

He’s afraid she’ll skip out on him. As Florence waited for the elevator, she was muttering to herself. She reminded herself of Popeye

She crossed the street, still muttering. Muttering, and clenching and unclenching her fists.

She was doing this with her fists because she’d been having some trouble with her left hand. Carpal tunnel syndrome. Her fingers sometimes jumped around as if they had five little minds of their own. A neurologist had told her to get an ergonomic keyboard and an ergonomic mouse and an ergonomic splint for her wrist; she’d gotten all of it, and she’d faithfully done the exercises he prescribed, but none of it was working so far.

Muttering, clenching, unclenching: I must look, she thought, like a madwoman.

"Always a pleasure to read for his well-drawn characters, quiet insight and dialogue that crackles with wit, Morton here raises his own bar in all three areas." -- Kirkus, starred review

"Morton’s intelligent, layered portrait of a feisty, independent older woman is an absolute joy to read, not only for its delightful wit but also for its dignified appraisal of aging and living life on one’s own terms." --Booklist, starred review

"Morton (Starting Out in the Evening) has created an obstreperous, rebellious character who is likable for being true to herself." --Library Journal

“Combining a rigorous intellect and a deep humanity, this is the story of a feminist hero, a family coming together and apart, and the ways we interpret the past and attempt to face the future. Most of all, Florence Gordon shows how passion — of one type or the other — shapes a heart." —Alice Sebold, author of The Lovely Bones

“Perceptive isn't a strong enough word to describe Brian Morton's insight into family dynamics; psychic is more like it. From the nuances of a long marriage to the inevitable, infinitely sad divisions and tender connections between grandparents and parents and children, Morton nails it all. And somehow he still manages to be funny, even as he breaks your heart.”—Emily Gould, author of Friendship

"Florence Gordon is a marvelous creation. Like many great characters in English literature, she is a sacred monster, fully realized and richly present in the pages of this thoroughly enjoyable book."—Vivian Gornick, author of Fierce Attachments and Approaching Eye Level

"A marvelously wise, compassionate, funny, rueful and altogether winning novel.  Brian Morton knows inside-out this tribe of witty, thoughtful people who, for all their decent values and good intentions, can't seem to narrow the unbridgeable distance between men and women, young and old,  pride and compromise, solitariness and community. Florence Gordon is his most generously ample, humane and vital book."—Phillip Lopate, author of To Show and To Tell and Against Joie de Vivre

"Florence Gordon is one of contemporary literature’s most wondrous characters: flawed and brilliant, funny and serious, totally unforgettable."—Darin Strauss, author of Chang and Eng and Half a Life

“Florence Gordon belongs on the very  short list of wonderful  novels about older women. Florence, the brilliant, cranky, solitude-craving feminist writer, is an indelible character, and her New York—the fading city of books and writers and melancholy oddballs —lives on in these immensely pleasurable pages.”—Katha Pollit, author of Learning to Drive: and Other Life Stories 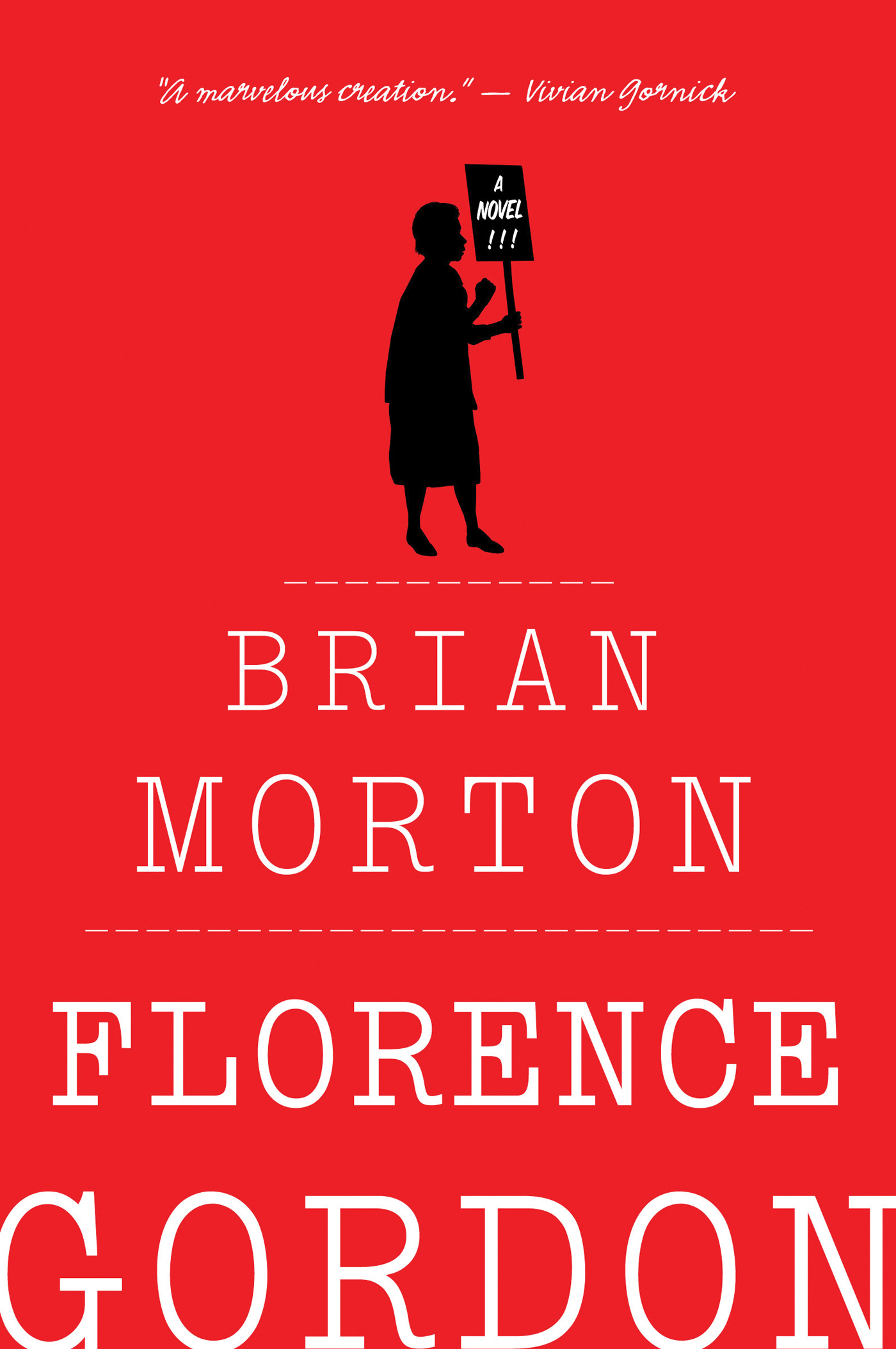