In a YA fantasy rich in intrigue, adventure, danger, and romance, a mixed-race teen heroine must decide which part of her heritage to claim: her privileged status, or her ability to become invisible—for which her kin are being persecuted.

Romance, intrigue, and plenty of action are woven into a rich and suspenseful narrative in this powerful YA fantasy. The mixed-race heroine Myra is a Flickerkin and can flicker (become invisible) at will. She hasn’t cultivated or revealed this ability, since Flickerkin are persecuted as potential criminals and spies. When invisible people become tricksters and then murderers, Myra’s Flickerkin heritage becomes a deadly secret, putting her relationship with the leader’s son—and her own life—in jeopardy. Loyalties shift and difficult choices are made before Myra understands who she wants to be.

About the author
Mary G. Thompson

Mary G. Thompson was born and raised in Cottage Grove and Eugene, Oregon. She was a practicing attorney for more than seven years, including almost five years in the U.S. Navy. She is a librarian in Washington, D.C. Visit her at www.marygthompson.com.

I didn’t know the Ability existed until the day I learned I had it, when I was five years old. I woke up from a nightmare and began to cry, and my father came into my room, but when he turned on the light, he couldn’t see me. In that way, he learned not only about me but also about my mother. She had sworn that she was an ordinary Leftie, that she had no blood of the Flicker Men, but she had lied.

My mother cried in silence. My father pounded his fist on the table.

“She has the Ability, Rhonda. You have the Ability!” my father yelled.

My mother said nothing.

“You lied to me. You entered the city. You had a child.”

“I never wanted a child,” my mother said. Her voice was soft, and for the first time I could recall in my short life, it wavered.

“You never thought to tell me why not? When I pushed for a family, you couldn’t tell me this might occur?”

“I hoped it wouldn’t,” my mother said. “She’s only one-sixteenth Flicker.”

“You lied!” my father raged. He turned his back to her, faced a window with the curtain closed. After this day, it would remain so.

“Would you have loved me if I hadn’t?”

My mother’s words hung in the air. She and my father didn’t know I was peeking around the corner of the hallway. I don’t think they remembered me at all. One thing I always knew was true was that my parents loved each other. Often their eyes would meet and they seemed to float upward, leaving me below. They spoke their own language, using only their eyes—?his dark brown and hers pale gray-blue.

“Rhonda . . .” The rage had left my father’s voice. He remained looking at the window. “What am I supposed to do now?”

“I’m the same woman, Donray,” my mother said. “Myra is the same child.”

“You know the Flicker Laws,” he said. “The penalty for a Flickerkin caught outside the Left Eye is Judgment by the Waters.” I didn’t know then what that meant. I thought the Waters judged us always, that in the scheme of life, they rewarded good children and punished bad ones. I didn’t understand that when citizens committed the worst of crimes, like murder or treason or being a Flickerkin outside the Eye, the Council would toss the criminals over the cliff’s edge, into the ocean, and the Waters would save them or let them drown.

“I do not intend to be caught,” my mother said.

“What of Myra?” my father asked. “How can a child control this?”

“I will teach her,” my mother said. “Children who suppress the Ability may go their whole lives without flickering. We have caught it in time.”

“You must go back to the Eye,” my father said. “You must take her and leave.”

My father turned around. Tears were rolling down his face. I jumped back into the hallway. I had never seen anything like that before. “It is not safe here,” he said. “I am only one vote on the Council. Some Members will not care that you are my wife or that she is my daughter. They will throw you to the Waters.”

I heard sobs from both of them. I didn’t see what they did, if they embraced or merely stared at each other, eyes meeting, floating in their own space. But I didn’t hear another word, and we did not leave. No one ever spoke of us leaving again.

So they taught me in secret about the Flicker Men: that they were a race who were like humans but with differences, that they had come to the Upland many generations ago and lived in the Left Eye with my mother’s people, who were called Lefties, that there had been a war, and that the Flicker Men had left with a cycle of the oceans and never returned. And that these Flicker Men could become invisible and had left this Ability with many of their mixed-blood descendants, who were called Flickerkin. This was before I knew what it meant to be a Leftie, to have lighter skin than the Plats and curlier hair, to be shorter than Plat women and to have more curves. I didn’t know that Plat men and Leftie women did not marry, that my parents had bought the necessary papers with my father’s money. Back then, I thought I might like to be invisible.

“You must never do it,” she said. She said it quietly, but with that look, with that tone that scared me more than someone else’s mother shouting. She held me by the shoulders and looked at me with cold, hard eyes. “If you cause yourself to flicker, the Ability will take control. You will be required to suppress it at every moment. I will help you to never flicker again. You must never try to flicker. Do you hear me, Myra?” She shook me.

“There are known Flickerkin in the Eye who have never flickered even once, and others like you, who accidentally flicker once but never again. If you do not trigger your Ability, you will be safe.”

I didn’t understand what she meant to keep me safe from. I only knew that I must protect myself from her cold, quiet anger.

“Good,” she said. She ran a hand through my hair and kissed my cheek. “You will not be like me.”

My father was with me every night after that. We would read together and play games, following a Leftie practice designed to help children control nightmares. I suppose my mother knew that if she were the one to help me, she might scare me more. The nightmares stopped, and I didn’t flicker. We didn’t speak of that awful night, and after a while, it was almost as if it hadn’t happened.

So it was that between the ages of five and sixteen, I lived like any other child of a Council Member. I can’t say that some didn’t see me as half Leftie or take long looks at me as I walked past. But after all the years of being normal, I no longer worried about flickering. I worried about ordinary things such as yo...

"...gripping characters, a sharp, quick pace, and a satisfying conclusion."

"Thompson’s imaginative descriptions of Flickering...and the sea-centered rituals of the island people combine to create a unique fantasy world with a rich history."

"This tale of mixed heritage and divided loyalties with an engaging heroine will appeal to fans of character-driven fantasy. "

"Filled with vivid, fascinating magic and set in an intriguing world, Flicker and Mist is an exciting, thought-provoking, haunting novel that lingers long after you finish the last page."

—Sarah Beth Durst, author of The Queen of Blood 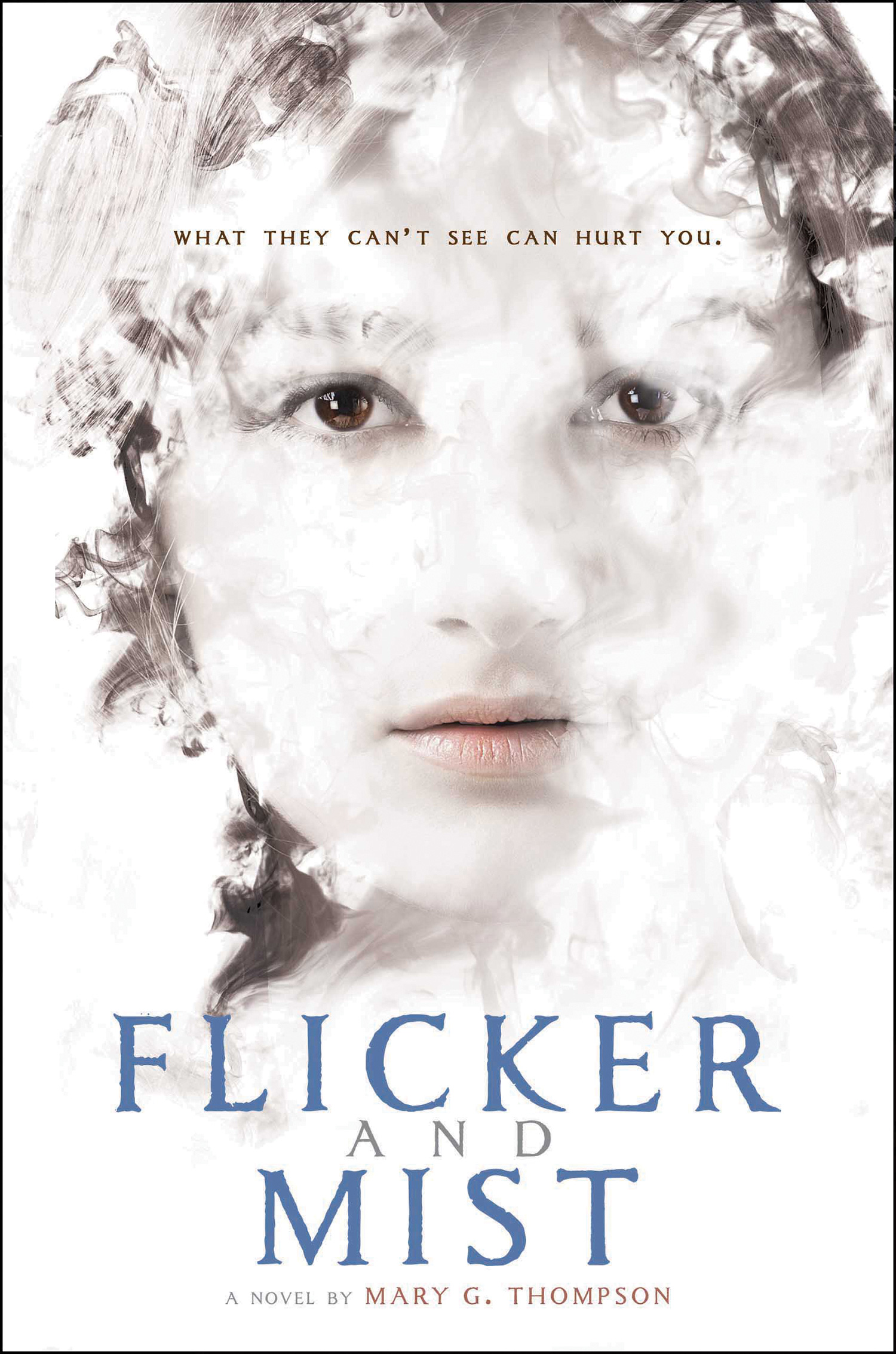