Clifford Allyn Abernathy III (just Cliff, for short) is the oldest of six kids in a family that does everything—fighting, laughing, playing, eating, telling stories, and celebrating the holidays—in a big, often outlandish, and sometimes poignant way.

Taking the family from Christmas to Christmas, the chapters of Fig Pudding, narrated by eleven-year-old Cliff, are complete short stories in themselves. Read together, they tell the tale of life in a large, loving family. Besides a fresh look, this edition includes a brand new story.

Clifford Allyn Abernathy III (just Cliff, for short) is the oldest of six kids in a family that does everything—fighting, laughing, playing, eating, telling stories, and celebrating the holidays—in a big, often outlandish, and sometimes poignant way.

Taking the family from Christmas to Christmas, the chapters of Fig Pudding, narrated by eleven-year-old Cliff, are complete short stories in themselves. Read together, they tell the tale of life in a large, loving family. Besides a fresh look, this edition includes a brand new story.

About the author
Ralph Fletcher

Ralph Fletcher is the author of many well-received books for children, including the novels Fig Pudding and Flying Solo, and the picture books Twilight Comes Twice, Grandpa Never Lies, and Circus Surprise. He lives with his family in New Hampshire. Visit him online at ralphfletcher.com.

My full name is Clifford Allyn Abernathy III, after my father and grandfather, but I leave off the III, the Allyn, and the ord. Call me Cliff. I’m in Mr. Beck’s class at the Bradford Bridges Elementary School in Ballingsford. I’ve noticed lately that lots of my favorite things seem to start with “B”: baseball (Baltimore is my favorite team), basketball, bacon, bluefishing, blue slush cones. Brad.

I’m the oldest of six kids. And that makes me different from the other kids. Dad and Mom sure treat me different. The other kids can whoop and scream and holler like a bunch of savages. They can sneak into Mrs. Montgomery’s vegetable garden and pick all her cherry tomatoes—no big deal. They can climb trees and get sticky pine pitch smeared all over their shirts and hair—what do you expect?

Dad and Mom expect more from me. I have to be Mr. Responsibility, Mr. Set-a-Good-Example. On certain days keeping the other kids out of trouble makes me feel more like a policeman than a brother. Some days it drives me nuts.

Take the time when a water pipe burst down the street and made a huge mud puddle on the Mcllreavys’ front lawn. Before I could say Baby Beluga the other kids had kicked off their shoes (Teddy kept his socks on) and waded deep into the mud-brown water. I stood at the edge yelling at them to get out, secretly wishing I could go in. When we got home it didn’t matter to Mom that my own clothes didn’t have a speck of mud on them. She took one look at the other kids, sat me down as if it was my fault, and demanded, “How could you let this happen?”

Don’t get me wrong, being the oldest has its advantages. I don’t have to wear a baseball glove somebody else stunk up with years of their old sweat. I don’t have any Monster Big Brother or Evil Big Sister to boss me around. I get to stay up later than anyone else. And I get to hear lots of grown-up stuff the younger kids never hear, like about why Uncle Ray doesn’t come to visit anymore (he’s drinking again).

“Being the oldest is special,” Mom is forever saying. But when you balance out the advantages with having to act like Mr. Almost-Perfect and all the rest, take it from me, being the oldest is not all it’s cracked up to be.

Living in a family with so many people can be pretty weird, too. Ever go to bed on a cold winter night with the heat turned down and your room so cold you have to pile a bunch of blankets on top of you? While you lie there you mostly feel the flannel sheet and quilt right next to you. With the other blankets, the ones added last, your body doesn’t notice whether those blankets are made of wool or cotton. All you know is that they’re helping keep you warm.

In a crazy way it feels like that, living in a family with so many kids: Nate, Cyn (short for Cynthia), Teddy, Brad, Josh. Nate is like my closest blanket. We’re less than a year apart. We share a bedroom. The other kids are my sister and brothers, but Nate is my best friend. And then there’s the baby, Josh. I was almost ten when he was born. He’s okay, as babies go, but most of the time I don’t pay all that much attention to him. He’s like that last blanket piled on my bed just before I fall asleep.

“We Abernathys always overdo everything,” Mom likes to say. True enough. I hate going with Mom to the supermarket—it’s embarrassing. We end up with two shopping carts overflowing with food. Mom buys the jumbo size of everything. When she cooks, she always doubles the recipe, but after supper it’s a miracle if there’s any food left on the table.

We Abernathys always overdo everything, but even for us this past year has been like nothing I’d ever thought possible. Like five years crammed into one. With plenty of stuff I want to remember forever. And stuff I wish I could forget.

I only know one way to start telling about a year like this: take a deep breath, begin at the beginning, and push right on through until the end.

It started a few days before Christmas. I was sitting in the kitchen, getting ready to dig into a steaming plate of French toast Mom had just handed me, when she asked: “Would you cut up Josh’s French toast first?”

“Oh, all right,” I grumbled. Josh wasn’t quite two. I cut a piece of French toast, and he popped it into his mouth. I cut another, and he gobbled down that piece, too.

“Don’t just swallow it,” I told him. “You gotta chew or you’ll get a bellyache.”

Josh started coughing hard. He had a bad cold: two fat jets of greenish snot were slowly making their way down his face from nose to mouth. He grinned up, but I tried not to look at him—it was too disgusting. Finally I got his toast cut up and his nose wiped, and had just drowned my own French toast in syrup when all of a sudden I heard something at the front door.

“Watch your step, Grandma,” a voice said. Dad! Grandma! A mad scramble for the front door. I jumped up first, but Teddy swerved in front of me, nearly knocked me over, and made it to the front door ahead of everyone else.

Grandma Annie stood there waiting for us, a little stooped over, holding a small shopping bag. Dad stood behind her carrying two suitcases. “Grandma! Grandma!”

All six kids wrapped Grandma in a big bear hug.

“Well, hullo! Hullo!” she cried. Her face was lit up, blue eyes sparkling behind her glasses. “Hullo! Look at you all! Just look at you! How tall you all are! Cliff, you’ve grown half a foot since last summer!”

“Just broke five feet,” I told her. I was the second-tallest kid in my class, three inches behind Melody Swift, a dorky blond-haired girl who had just moved from Tallahassee.

“Just as it should be,” Grandma told Mom. “Better to spend your money on food than on doctors’ bills.”

Josh tried to climb her leg like a squirrel. She reached down and picked him up. “Well, hello there, little monkey! Just look at that runny nose! That’s quite a cold you’ve got, young man.’’ 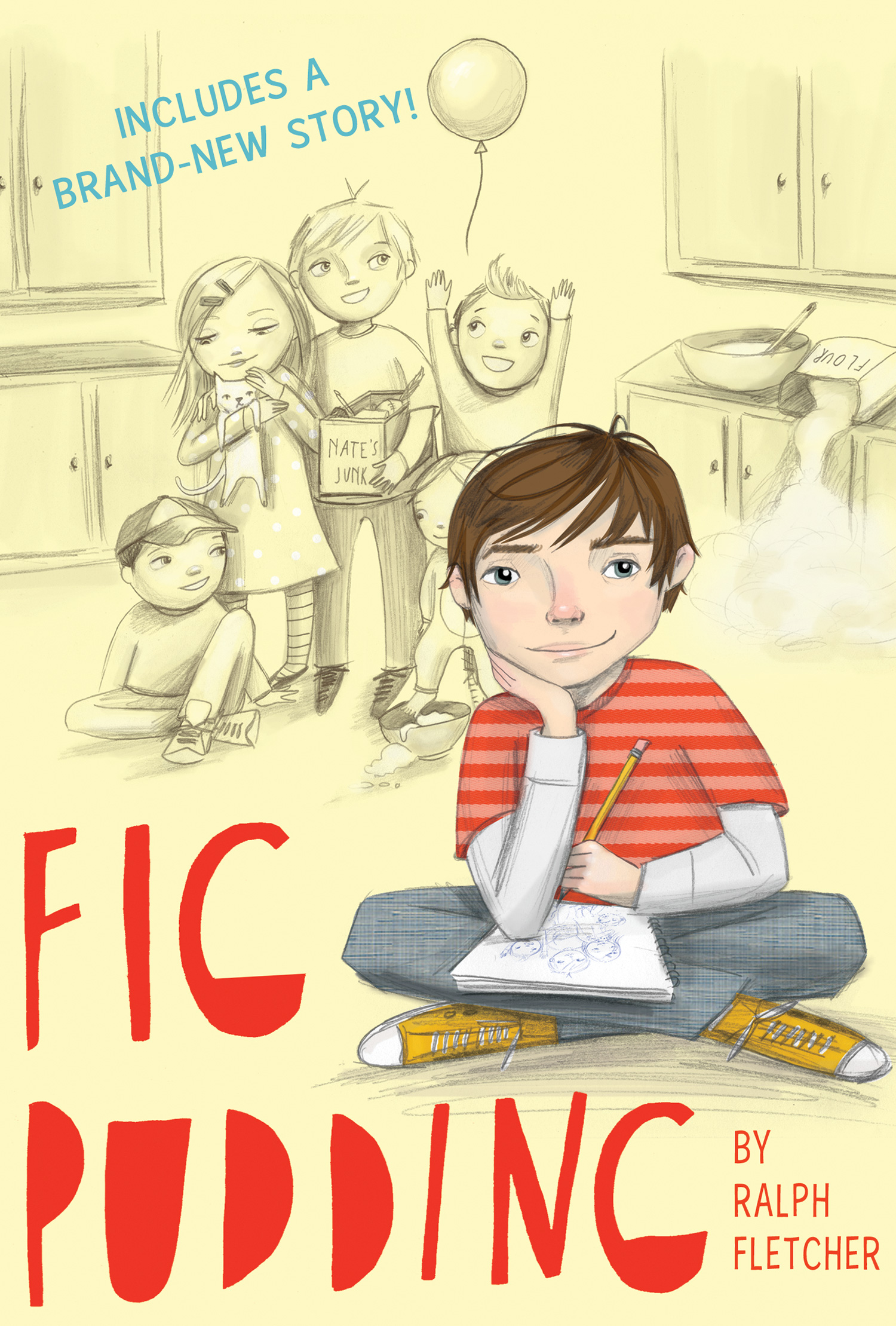