A Note from Ms. Shelby-Ortiz

Richard is watching the clock above the whiteboard. Four minutes until his weekend officially begins. Well, not technically, but in his mind. When the bell rings, that’s the signal for freedom. He only has to endure waiting for everyone at his table to straighten up and look “ready to be dismissed.” Those are Ms. Shelby-Ortiz’s words. She’s the teacher and she’s really nice and he likes her a lot.

When his table is called, he will have to hold himself back from jumping up and running out of there. First, he must get up and push his chair under the desk and stand behind it like a soldier. Mouth zipped. Then, he’ll have to walk in an “orderly fashion” to the line at the classroom door. He’ll have to make sure he keeps his lips together and doesn’t punch Ralph in the shoulder for fun. He’ll have to make sure he doesn’t make a fart sound with his hand in his armpit. He must try really hard not to pull one of Nikki’s fat braids. It’s truly difficult to be perfect.

He looks over at Gavin, his new best friend. Gavin can do all that being good stuff so easily. He doesn’t even look tempted to jump around or pull a braid or give a punch. He makes it look easy to be good.

The bell rings. It sounds like music to Richard’s ears. Ms. Shelby-Ortiz starts to look around. All the students are hurrying to put away their textbooks, load up their backpacks, check the floor around their desks, and then stand ramrod-straight behind their chairs. Richard is the best straight-as-a-ramrod stander at his table. He knows Ms. Shelby-Ortiz is going to compliment him. He can just hear the words: I really love the way Richard is standing. He looks ready to be dismissed. He waits for them. His table is the best, without a doubt. Ralph, at Table Four, is still picking up paper off the floor. Hah, hah.

Ms. Shelby-Ortiz begins her stroll. Walking slowly, checking desks, looking at the floor . . . “I like Table Three,” she says.

“Yes. They look all ready to line up.”

Come on, Ms. Shelby-Ortiz . . . More praise, please. Richard looks over at Gavin and smiles, but Gavin is busy looking straight ahead.

“Okay, Table Three. You may line up.”

Richard tries hard not to shoot out from behind his desk and fast-walk to the door.

“Except Richard—I want you to be seated for now.”

At first, he thinks he didn’t hear correctly. Did Ms. Shelby-Ortiz tell him to be seated? Did he hear her right? The other three students at his table quietly walk to the door. Richard sits back down and looks around as Ms. Shelby-Ortiz dismisses the rest of the class, table by table.

When the last student walks out, she goes to her desk and puts her grade book—the dreaded grade book—in the middle of it. She looks over at Richard, smiles, and says, “Come on over here, Richard, and have a seat.”

He doesn’t like the way the chair looks, facing Ms. Shelby-Ortiz’s desk. It looks like the chair of a person guilty of something. He hopes this doesn’t have anything to do with his accidentally not giving his part of the presentation about the habitat of the howler monkey last week. He was hoping she had just kind of forgotten about it.

Richard sits down and looks at his hands. Ms. Shelby-Ortiz settles into her chair. “We have a problem,” she says.

Richard keeps looking down at his hands.

Uh-oh. Richard swallows. He doesn’t like that grade book. He feels as if it contains a bunch of evidence against him. Bad spelling grades and test grades and things like that. He looks out the window and wishes he were one of the kids running for the bus or laughing and talking with friends.

“What happened to your part of the rainforest report? Weren’t you supposed to turn that in last Friday?” Ms. Shelby asks.

Richard stares at his hands some more and thinks. The class had broken up into groups. Each group had chosen a rainforest animal. He was in Group Howler Monkey, which included Erik Castillo, Yolanda, and Nikki. Richard was supposed to do the habitat; Erik was supposed to do what the howler monkey preys on and what its predators are; and Nikki and Yolanda were doing the visual aids: charts and pictures, some drawn and some copied from books and stuff.

The day of the presentation, Richard had been home sick. Kind of. Well, truthfully, he’d only had the sniffles and he supposed he could have gone to school. Except that he’d kind of spent too much time playing video games and just generally goofing off in the days leading up to the presentation. By the time he got down to work, it was Sunday night and the report was due on Monday. And he really was a little bit sniffly.

Ms. Shelby-Ortiz let Group Howler Monkey delay their report until that Friday, and it did seem as though he had plenty of time to get it together, but Friday came really fast and Richard still wasn’t ready. The group had to present their report without the part about the habitat of the howler monkey.

Ms. Shelby-Ortiz said she’d give him until Monday. Monday came really fast, too.

Now it’s Friday and she clearly hasn’t forgotten about the presentation. “I’m sorry, Richard,” she says. “You’ve not been doing your best work in other areas as well.” She runs her finger down her grade-book page and stops at his name. “Oh my,” she says under her breath as she moves her finger across the page, stopping every few moments to tsk-tsk to herself. She turns a few more pages, finds his name again, then runs her finger across that one. Every once in a while she shakes her head slowly. And sadly. “These spelling grades are not good. And your math quizzes . . . I know you can do better.”

Richard looks down again but hears Ms. Shelby-Ortiz open her drawer. He glances up to see her with that scary pad in front of her, the one for requesting that a parent or guardian come in for a conference. She begins to write on it.

Quickly, Richard starts making some calculations. If he brings the note home that day and gives it to his parents, there goes his weekend. There goes Gregory Johnson’s skateboard party next Saturday. There goes lounging around, watching TV and playing video games, and practicing his flat-ground Ollie, his favorite skateboard trick. And here comes a miserable weekend, with extra chores designed to make him learn responsibility and provide him with the opportunity to think about his bad choices. He doesn’t want a weekend of chores and thinking about how he can do better. What kid would? No—it would be better to hold off on giving that note to his parents as loooong as possible. Yeah, he thinks. That’s just what he’s going to do.

“So that’s what I’m going to do,” he tells Gavin on the way home from school.

"A welcome series addition that emphasizes familiarity instead of difference and treats its message with an affectionately light hand."

"Lots of kids will recognize themselves in this book...and teachers and librarians will be happy to have a series to recommend that stars a realistic, likable boy of color."

"This is a consistently fun read, complete with endearing characters, charming spot illustrations, and satisfying resolutions. Furthermore, it is a much needed story in which African American boys can see themselves visually and textually reflected in a positive light, completely free of the usual tropes of multicultural literature."

"The warm details of Richard's African-American family are tempered by the realism of life with a bunch of boisterous boys...English continues to earn her place as one of the most reliable early-grade authors, and readers who haven't discovered the Carver School kids will find this a satisfying entry point." 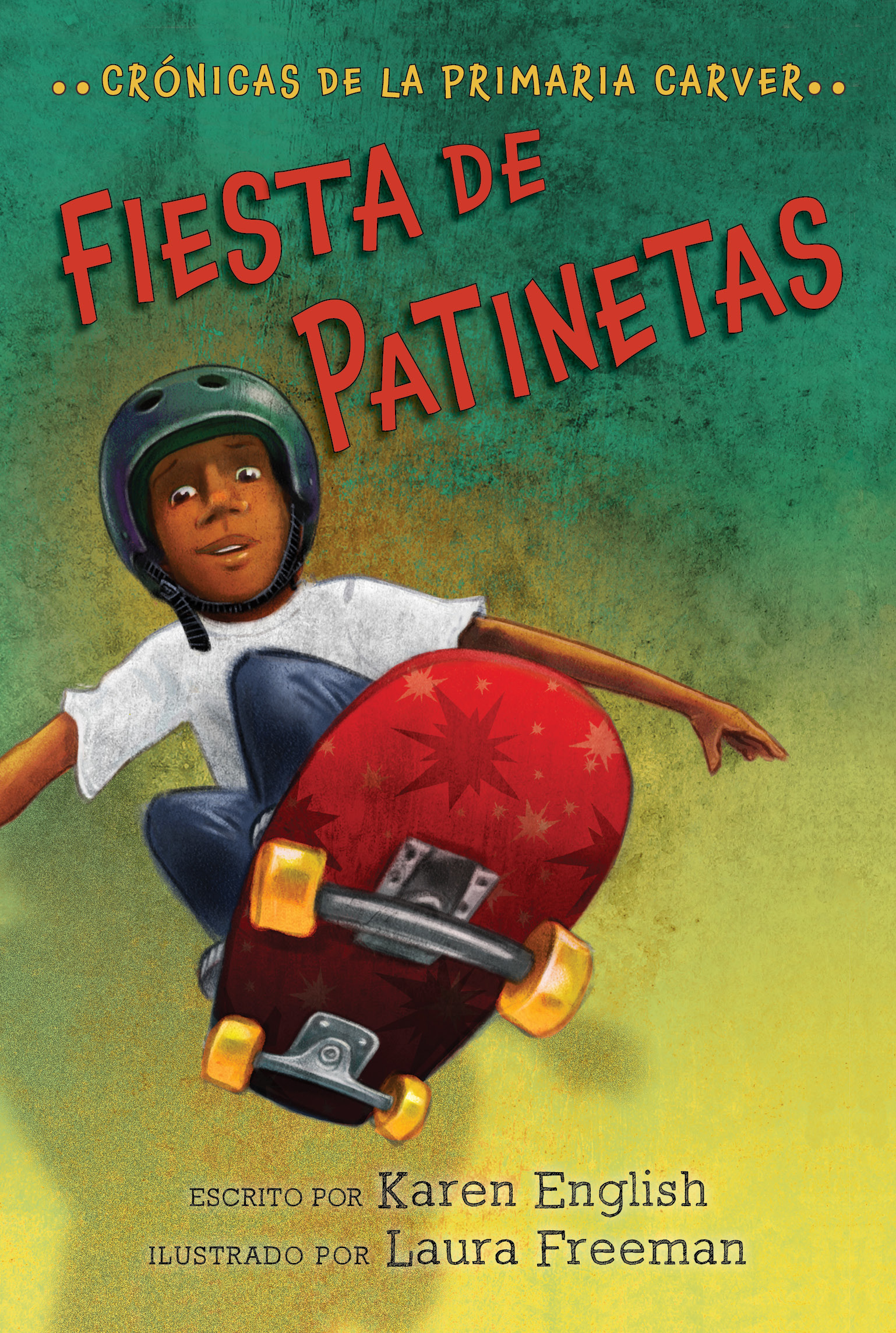