A Hollywood hummingbird rehabber will do nearly anything to save these tiny, fragile creatures, and readers following her adventures will learn just how astonishing and heartwarming these birds can be.

“I cannot believe what a gripping read this is.” —Robin Young, host of NPR’s Here and Now

“A book that will change forever the way you look at these little birds.”—Los Angeles Times

Before he collided with a limousine, Gabriel, an Anna’s hummingbird with head and throat cloaked in iridescent magenta feathers, could spiral hundreds of feet in the air, dive 60 miles per hour in a courtship display, hover, and fly backward. When he arrived in rehab caked in road grime, he was so badly injured that he could barely perch. But Terry Masear, one of the busiest hummingbird rehabilitators in the country, was determined to save this damaged bird. During the five months that Terry worked with Gabriel, she took in 160 orphaned and injured hummingbirds, from a miniature hatchling rescued by a bulldog to Pepper, a female Anna’s grounded on a film set. In their time together, Pepper and Gabriel formed a special bond and together, with Terry’s help, learned to fly again. Woven around Gabriel’s and Pepper’s stories are those of other colorful birds in this personal narrative filled with the science and magic surrounding these fascinating creatures.

“This is a charming and lively summertime read, something for the patio or balcony, glass of iced tea at hand, a hummingbird or two zipping around the azaleas.”—Dallas Morning News

“I was riveted, charmed, delighted, devastated, profoundly moved, and taken to a magical place few people ever get to glimpse.”—Stacey O’Brien, author of Wesley the Owl

TERRY MASEAR has been rescuing hummingbirds since 2005. Over the past ten years, she and a network of rehabbers in Southern California have rescued 5,000 hummingbirds, the majority of which have been released back into the wild. Terry received her Ph.D. from UCLA, where she teaches English as a Second Language. She has taken time off from teaching to focus on researching and writing about hummingbirds.

About the author
Terry Masear

TERRY MASEAR has taken time off from teaching English as a second language at UCLA Extension to devote time to researching and writing about hummingbirds. Terry and her network in Southern California rescue and rehabilitate over five hundred orphaned and injured hummingbirds each year.

Few circumstances lead to a person balancing precariously in a pine tree a hundred feet over the Pacific Ocean at dawn on a cloudless summer day. Bankruptcy, a messy divorce, an unmanageable addiction, a broken dream. Nagging guilt over some nameless transgression that can no longer be endured. Or the doctor explaining how you’ve got two months and they’re not going to be pretty. But Katie isn’t one misstep away from certain death for any of these mundane reasons. She’s on a mission. As she edges out over the rocky shoreline, the bowing branch quivers under her feet.

“What should I do next?” she whispers breathlessly into the phone. “I can almost reach it now.”

“Wait, you’re calling me from the tree?”

“Yeah, I’m on the branch just below them.”

“You’re on what?” I wrest myself from a dream. “Katie, get down and call me back. This is insane.”

“Terry, listen. Yesterday afternoon before I left my house I told you I was too busy and stressed out to deal with this kind of thing now. And remember what you said? You said, ‘If not now, when?’?”

I hesitate as the alarming image of what Katie is up to shifts into focus. From my distant, half-conscious state, I try to imagine the line of reasoning people walk themselves through before calling me at all hours: Maybe I’ll give Terry a call. After all, this is an emergency, isn’t it? I hope she doesn’t think I’m too weird calling her from thishookah lounge (the caller all pumped up at two a.m.), or gentleman’s strip club (the stripper calling, not the gentleman), or all-night Korean spa (while in a sweat), or Guatemalan village (¿Hablas español?). Still, despite this rich cultural variety, Katie is my first tree person.

“Yeah, I’m here.” I sit bolt upright in bed. “Okay, do you have the clippers I mentioned?”

Garden clippers came up purely hypothetically yesterday when a frantic Katie called me after discovering a hummingbird trapped in her home office. She had had the French doors to the backyard propped open, and the bird flew into the house in the late afternoon just as Katie had an industry event — which her entire career and life ambition depended on — to attend. Katie called me for advice but was unable to catch the terrified bird rocketing around the rafters, so she left the French doors open and went out. When she arrived back home after midnight, she didn’t see the hummingbird anywhere and assumed it had flown out, so she closed up the house and went to bed, despite my warning about checking the room carefully.

Now two chicks in a nest overhanging the steep cliffs of Malibu are screaming their heads off, and their mother is dead behind the filing cabinet. It’s just two tiny birds. But these little birds create big guilt. The nestlings will sit out there crying all day as they slowly starve to death. So for Katie, there is only one way out from under the crushing weight of self-recrimination.

“I have the clippers in my hand,” she confirms.

“I have a Bluetooth.”

“Great, then reach under the nest and cut the branch at the far end first, about two inches from the nest.”

An endless silence follows, punctuated by a few muted curses over the roar of wind and waves.

More silence, then: “Okay, now what?”

“Now cup one hand under the nest and cut the branch on the side closest to you.” I let out a deep breath, recognizing that these instructions leave no hands for holding on. “And for God’s sake, be careful.”

“Don’t worry. I competed in gymnastics in college. I have excellent balance,” a strained voice comes back.

“I finished first in the state in ’95 and competed in the nationals in ’96,” she continues, as if we’re conducting a casual, precompetition interview on ESPN.

“Even better.” That will be my first line of defense in court, I assure myself.

“I do a killer handstand.”

I hear the haunting wail of the eternal wind, and nothing else.

After a deafening silence that sends me vaulting off the bed and pacing around the room in panicked circles, I hear a faint voice drift back through a crackling connection. “A pinecone just fell on my head.”

Something they never prepare you for in gymnastics.

“I mean, do they look alarmed, like they’re about to fly away?”

“They look a little nervous” — she pauses reflectively — “but no, they’re just kind of staring at me with big eyes.”

“Good. Then cup your hand over them and make your way back, slowly. And if I were you, I’d ditch the clippers.”

“Got it.” She breathes heavily as I hear the sound of bark scraping under sneakers and try not to imagine the lead story on the evening news.

“Good idea. Put the nest in a box on some crumpled Kleenex when you get in the house and call me.”

“Oh, and Katie. One more thing.” I sigh, rubbing my eyes. “Just for the record, I never told you to do this.”

“Terry Masear’s charming account of saving hurt and orphaned hummingbirds grabbed my attention from the first paragraph and kept me riveted until the very last page. I loved this artfully woven story and am certain that animal lovers of all ages will as well.” — Michele Raffin, author of The Birds of Pandemonium

“This rare and lovely book is destined to be a classic. I was riveted, charmed, delighted, devastated, profoundly moved, and taken to a magical place few people ever get to glimpse. It’s one of the best books I’ve ever read about how rehabbers bond with the animals we save.” — Stacey O’Brien, author of Wesley the Owl

“This book is a delightful read. No one else could write such a wonderful memoir of care, compassion, and delight for these small creatures. Masear’s writing is enthralling and captivating—and I hated for it to end.” — Joanna Burger, author of The Parrot Who Owns Me

“Fastest Thing on Wings is an exaltation of hummingbirds, but it’s also the story of Terry Masear’s exceptional heart and heroism in saving these fragile and remarkable creatures. In her beautiful account, every rescue is a revelation. Hollywood is full of stars, but few shine as brightly as hers.” — Wayne Pacelle, president and CEO, Humane Society of the United States 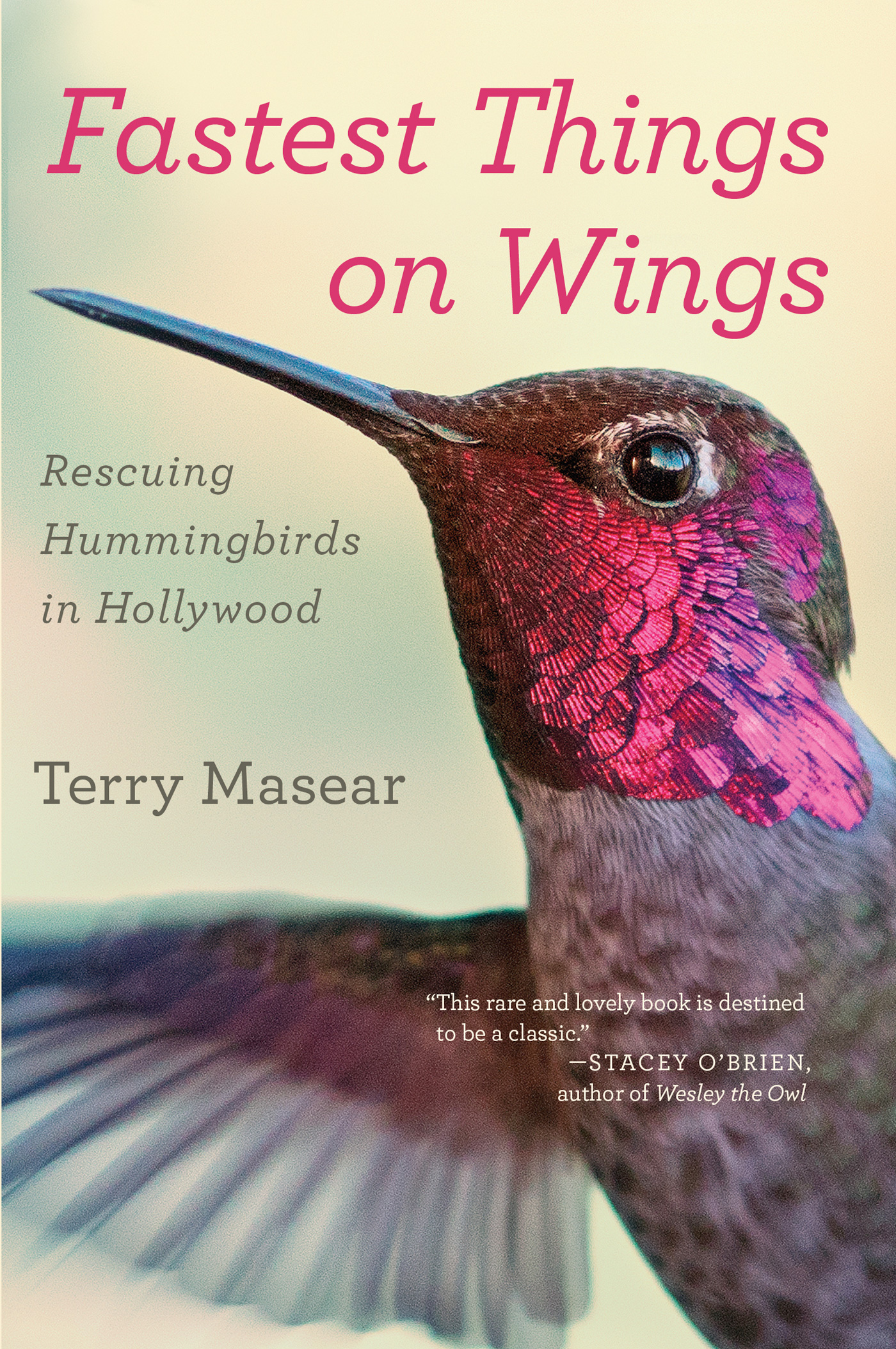