From a former poet laureate, a new collection of essays delivering a gloriously unexpected view from the vantage point of very old age.

“Deliciously readable . . . Donald Hall, if abandoned by the muse of poetry, has wrought his prose to a keen autumnal edge.” — Wall Street Journal

His entire life, Donald Hall dedicated himself to the written word, putting together a storied career as a poet, essayist, and memoirist. Here, in the “unknown, unanticipated galaxy” of very old age, his essays startle, move, and delight. In Essays After Eighty, Hall ruminates on his past: “thirty was terrifying, forty I never noticed because I was drunk, fifty was best with a total change of life, sixty extended the bliss of fifty . . .” He also addresses his present: “When I turned eighty and rubbed testosterone on my chest, my beard roared like a lion and gained four inches.”  Most memorably, Hall writes about his enduring love affair with his ancestral Eagle Pond Farm and with the writing life that sustains him every day: “Yesterday my first nap was at 9:30 a.m., but when I awoke I wrote again.”

“Alluring, inspirational hominess . . . Essays After Eighty is a treasure . . . balancing frankness about losses with humor and gratitude.” — Washington Post

“A fine book of remembering all sorts of things past, Essays After Eighty is to be treasured.” — Boston Globe

About the author
Donald Hall

DONALD HALL (1928-2018) served as poet laureate of the United States from 2006 to 2007. He was a member of the American Academy of Arts and Letters and a recipient of the National Medal of the Arts, awarded by the president.

Today it is January, mid-month, midday, and mid–New Hampshire. I sit in my blue armchair looking out the window. I teeter when I walk, I no longer drive, I look out the window. Snow started before I woke, and by now it looks to be ten inches; they say we might have a foot and a half. There are three windows beside me where I sit, the middle one deep and wide. Outside is a narrow porch that provides shade in the summer, in winter a barrier against drifts. I look at the barn forty yards away, which heaves like a frigate in a gale. I watch birds come to my feeder, hanging from a clapboard in my line of sight. All winter, juncos and chickadees take nourishment here. When snow is as thick as today, the feeder bends under the weight of a dozen birds at once. They swerve from their tree perches, peck, and fly back to bare branches. Prettily they light, snap beaks into seed, and burst away: nuthatches, evening grosbeaks, American goldfinches, sparrows.

Most days, squirrels pilfer from the birds. I’m happy to feed the squirrels — tree rats with the agility of point guards — but in fair weather they frighten my finches. They leap from snowbank to porch to feeder, and gobble my chickadee feed. They hang on to a rusty horseshoe, permanently nailed to the doorjamb by my grandparents, which provides a toehold for their elongated bodies. Their weight tilts the feeder sideways, scaring away the flightier birds while the bravest continue to peck at a careening table. No squirrels today. In thick snow, they hide in tunnels under snowdrifts, and a gaggle of birds feed at the same time.

As daylight weakens, snow persists. In the twilight of four p.m., the birds have gone, sleeping somewhere somehow. No: a nuthatch lands for a last seed. The cow barn raises its dim shape. It was built in 1865, and I gaze at it every day of the year. A few years ago, when we had an especially snowy winter, I thought I would lose the barn. A yard of whiteness rose on the old shingles, and I could find no one to clear it off. The roof was frail and its angles dangerously steep. Finally friends came up with friends who shoveled it, despite its precariousness, and the following summer I hired a roofer to nail metal over the shingles. Shingle-colored tin disposes of snow by sliding it off. Now I look at the sharp roof of the carriage shed at the barn’s front, where a foot of snow has accumulated. The lower two-thirds has fallen onto drifts below. The snow at the shed’s metal top, irregular as the cliff of a glacier, looks ready to slide down. In the bluing air of afternoon, it is vanilla icing that tops an enormous cake. A Brobdingnagian hand will scrape it off.

Suddenly I hear a crash, as the snowplow strikes the end of my driveway. High in the cab sits my cousin Steve, who expertly backs and lurches forward, backs and lurches forward. The driveway is oval, with Route 4 flattening one end, and Steve executes the top curve with small motions of snow-budging, building great drifts back far enough from the driveway so that there’s room for cars — and for Steve to pack away more snow when he needs to. It’s his first visit for this snowstorm, and his plowing is incomplete. He will return with exact skill in the middle of the night, when the snow stops, and tidy the path among the drifts. When he thuds into the driveway at three a.m., I will hear him in my sleep and wake for a moment, taking pleasure from Steve’s attack on drifts in the black night.

My mother turned ninety in the Connecticut house where she had lived for almost sixty years, and spent her last decade looking out the window. (My father died at fifty-two.) For my mother’s birthday, my wife Jane Kenyon and I arrived at her house early, and at noon my children and grandchildren surprised Gramma Lucy with a visit. We hugged and laughed together, taking pictures, until I watched my mother’s gaiety collapse into exhaustion. I shooed the young ones away, and my mother leaned back in her familiar Barcalounger, closing her eyes until strength returned. A few months later she had one of her attacks of congestive heart failure, only a week after her most recent. An ambulance took her to Yale–New Haven Hospital. Jane and I drove down from New Hampshire to care for her when she came home. She told us, “I tried not to dial 911.” She knew she could no longer live alone, her pleasure and her pride. We moved her to a facility attached to a hospital near us in New Hampshire.

She died a month short of ninety-one. Her brain was still good. A week before she died, she read My Ántonia for the tenth time. Willa Cather had always been a favorite. Most of the time in old age she read Agatha Christie. She said that one of the advantages of being ninety was that she could read a detective story again, only two weeks after she first read it, without any notion of which character was the villain. Even so, her last months were mostly bleak. Her arthritic knees kept her to bed and chair, and the food was terrible. We visited every day until she died. A year later, Jane, at forty-seven, was dying of leukemia, and showed me poems she had been working on before she took sick. One was “In the Nursing Home,” about my mother at the end. Jane used the image of a horse running in wide circles, the circles growing smaller until they ceased.

Twenty years later, my circles narrow. Each season, my balance gets worse, and sometimes I fall. I no longer cook for myself but microwave widower food, mostly Stouffer’s. My fingers are clumsy and slow with buttons. This winter I wear warm pullover shirts; my mother spent her last decade in caftans. For years I drove slowly and cautiously, but when I was eighty I had two accidents. I stopped driving before I killed somebody, and now when I shop or see a doctor, someone has to drive me. If I fly to do a poetry reading, my dear companion Linda Kunhardt, who lives an hour away, must wheelchair me through airport and security. I read my poems sitting down. If I want to look at paintings, Linda wheelchairs me through museums. New poems no longer come to me, with their prodigies of metaphor and assonance. Prose endures. I feel the circles grow smaller, and old age is a ceremony of losses, which is on the whole preferable to dying at forty-seven or fifty-two. When I lament and darken over my diminishments, I accomplish nothing. It’s better to sit at the window all day, pleased to watch birds, barns, and flowers. It is a pleasure to write about what I do.

Generation after generation, my family’s old people sat at this window to watch the year. There are beds in this house where babies were born, where the same babies died eighty years later. My grandmother Kate lived to be ninety-seven. Kate’s daughter, my mother, owed her “early” death to two packs a day — unfiltered Chesterfields first, then filtered Kents. My mother was grateful to cigarettes; they allowed her to avoid dementia. Before senescence my grandmother looked out the window at Mount Kearsarge, five miles to the south. As I gaze in the same direction, I see only a triangle of foothill, because softwood has grown so tall that it gets in the way. When Kate was a child here, elms blocked the foothill. They grew tall on both sides of Route 4, some of them high enough to meet over the center of the road. When she was ninety-four, she stumbled on the porch outside the window. Her fractured shin put her in the hospital — Kate, who had never taken to bed except to bear children. Her hospital stay affected her mind. Three years later, in the Peabody Home, I sa... 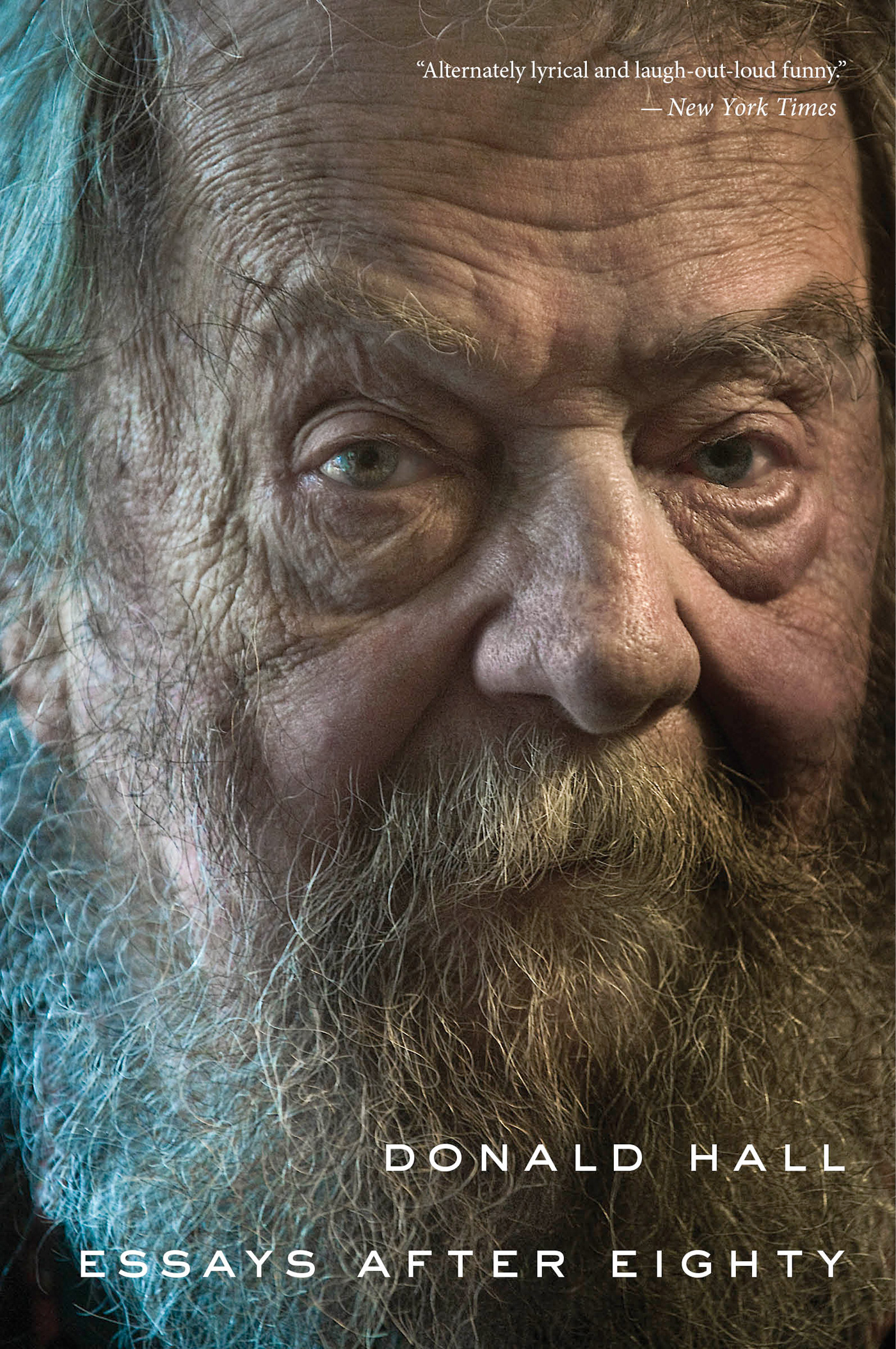