Emotional Success: The Power of Gratitude, Compassion, and Pride

A pioneering psychologist draws on fresh research to reveal the most effective—and least appreciated—route to achievement: our emotions.

A pioneering psychologist reveals how three emotions can provide the surest, quickest route to success in any realm.

A string of bestsellers have alerted us to the importance of grit – an ability to persevere and control one’s impulses that is so closely associated with greatness. But no book yet has charted the most accessible and powerful path to grit: our prosocial emotions. These feelings – gratitude, compassion and pride – are easier to generate than the willpower and self-denial that underpin traditional approaches to grit. And, while willpower is quickly depleted, prosocial emotions actually become stronger the more we use them. These emotions have another crucial advantage: they’re contagious. Those around us become more likely to apply them when we do.

As this myth-shattering book explains, prosocial emotions evolved specifically to help us resist immediate temptations in favor of long-term gains. Originally, they enabled us to build lasting relationships with other people, and they still do that brilliantly. But they can also be adapted to strengthen our bonds with our own future selves – who will benefit most from the grit we need to succeed in life. No matter what our goals are, EMOTIONAL SUCCESS can help us achieve them with greater ease and deeper satisfaction than we would have thought possible.

About the author
David DeSteno

DAVID DESTENO is a professor of psychology at Northeastern University, where he directs the Social Emotions Group. He is a fellow of the Association for Psychological Science and the American Psychological Association, for which he serves as editor-in-chief of the journal Emotion. His work has been repeatedly funded by the National Science Foundation and has been regularly featured in the media, including the New York Times, the Wall Street Journal, CBS Sunday Morning, NPR's Radiolab and Talk of the Nation, and USA Today. He is the author of The Truth About Trust (featured in articles and videos at Harvard Business Review) and coauthor of the Wall Street Journal spotlight psychology bestseller Out of Character. He frequently writes about his research for the New York Times, the Boston Globe, Harvard Business Review, Pacific Standard, and the Atlantic. At the broadest level, his work examines the mechanisms of the mind that shape vice and virtue. Studying hypocrisy and compassion, pride and punishment, cheating and trust, his work continually reveals that human moral behavior is much more variable than most would predict.

Me want cookie . . . but me wait. For almost anyone who was or lived with

a child sometime in the past forty years, the first part of that

sentence calls up images of a blue, fuzzy, grammatically challenged,

caught me off guard when I first heard it. Cookie, as his name implies,

was traditionally an embodiment of immediate gratification.

Sure, once in a while he was tweaked to accommodate the concerns

of the time. When the healthiness of kids’ diets was in question,

Cookie’s penchant for sweets was changed to include fruit. When

the dangers of food allergies in schools became apparent, he made

sure his cookies were nut-free. Yet across the years, one trait remained

he wanted it now. But in 2013, during Sesame Street’s forty-fourth

season, that changed; but me wait became part of Cookie’s Muppet

mantra and, as a result, part of a new generation’s early education.

Self-Control, Success, and the Road Not Taken

This change is evidence of our society’s continuing obsession

with success. And when it comes to achieving that success, whether

it’s at the office, in managing finances, in bettering health, or even

in pursuing an unlikely dream, decades of research has revealed that

self-control is key. By that, I mean the ability to resist urges for immediate

gratification in order to obtain greater rewards in the future.

Best-selling books such as Willpower, How Children Succeed,

and Grit all promise insight into how perseverance and patience can

affect our lives for the better. Not to be outdone, magazines from

the Atlantic to People routinely feature articles on the benefits of

self-control and how to obtain it.

the future. To the contrary, I think we need it. And while the

that this idea has moved from philosophy and theology into empirical

proof. The benefits of self-control aren’t a matter of opinion

anymore; they’re quantifiable. And what can be quantified can,

in theory, be maximized. The million-dollar question, of course, is

How? How can self-control be enhanced?

It’s here that I fear we have gone astray. For almost fifty years

we’ve been developing science-based strategies meant to help us

reach our goals. Yet on average, we are no better at delaying immediate

gratification than we were in the 1960s. If anything, our impatience

and desire for immediate satisfaction are on the rise. As

individuals and as a society, we’re spending more on impulse buys

and conveniences rather than saving for a rainy day or retirement.

smartphones rather than focusing it on learning and honing skills

we need. We’re satisfying our sweet tooth and, as a result, expanding

future well-being. And at a more macro level, many of us are resist-

that, though somewhat costlier in the moment, will help avoid

greater problems down the road. In short, we’re planning less for

the future, not caring as much about what that future will bring.

and shortsightedness stems from many factors, underlying

them all is a growing bias toward pleasure in the moment.

On any given day, most people fail to stick with their daily goals

they’re busy, tired, or stressed. That means almost one out of every

five times we try to work harder, eat better, save more, or prepare for

a test or performance evaluation, we’re going to fail to do it in favor

of something else that’s more fun in the moment. And when decisions

involve important goals — the ones that truly matter to people

— the success rate is even worse. Only 8 percent of New Year’s resolutions

are kept throughout the year. While 25 percent fail in the

first week. The result is that most of us frequently end up feeling

powerless to stick to our goals and, even worse, upset with ourselves

for loafing, splurging, bingeing, or otherwise giving in to a desire

for some short-term pleasure that will ultimately cost us.

This raises an intriguing and troubling question: If delaying gratification

and valuing the future are so important, and if we’ve been

using science-backed strategies for decades to help us do it, why are

most of us still so bad at it? One would think that our minds would

impulse control. After all, that’s one hallmark of evolutionary development:

the mind and body retain features that help us to thrive.

So, either the development of the human mind has a gaping hole,

as the need for self-control has been around since our species’s beginning,

or we’re doing something wrong. And as a scientist who

for decades has studied how humans make decisions, I can confirm

that it’s the latter.

Our minds do come equipped with the necessary tools to succeed,

but we’re forsaking them. We still have serious problems

because our notion of how self-control works is flawed.

Put simply, we’re seeing only half the picture. When we’re forced

to choose strategies for success, we tend to favor cognitive ones —

stoic approaches characterized by reason, deliberation, and force of

will. If you read those bestsellers I mentioned, page through popular

magazines, or even peruse scientific papers, you’ll find the same

in the face of challenges and temptations, we’re told to use what

psychologists term executive function — that part of the mind that

manages and controls “subordinate” processes such as memory, attention,

and feelings. The term executive wasn’t picked by accident.

This aspect of the mind is, in essence, the boss; it gives the orders

that the rest of the mind is supposed to follow. Executive function

allows people to plan, to reason, and to use willpower to keep focused,

that might get in the way of reaching their long-term aspirations.

And cognitive strategies such as these ...

“Emotional Success is as inspiring as it is practical. DeSteno shows us how to use our feelings of gratitude, compassion, and authentic pride to improve our lives—and the world.”—Arianna Huffington, author of Thrive and The Sleep Revolution.

"Are high achievers simply blessed with more willpower than the rest of us? DeSteno's provocative argument is that the science of success is, in fact, very much the science of social emotions like gratitude and compassion. I, for one, am convinced!"—Angela Duckworth, author of Grit.

“One of the leading psychologists of our time has discovered the keys to success: our emotions. They give us strength, they help us stick to our goals, they make us better friends and better people. DeSteno shows how gratitude, compassion, and—surprisingly—pride are essential to the good life. Emotional Success is a beautifully written and very important book.”—Paul Bloom, professor of Psychology at Yale University and author of Against Empathy: The Case for Rational Compassion

“If you think the key to self-control is overriding your emotions, think again. Moral emotions can strengthen your willpower—and this fascinating book uses the latest social science to explain how.”—Adam Grant, author of Give and Take, Originals, and Option B with Sheryl Sandberg

"A revolutionary way to achieve our goals that promises to make us happier, healthier, and more resilient along the way. Using persuasive prose and cutting-edge science, DeSteno shows how we can attain grit and grace—the perseverance to succeed combined with the qualities that inspire others as well."—Chade-Meng Tan, author of Joy on Demand and Search Inside Yourself

“Anyone who hopes to live a more meaningful and fulfilling life should read this book. DeSteno reveals the hidden power of “prosocial emotions,” feelings like pride (but without hubris), gratitude, and compassion. He relies on research rather than anecdote to convince us that these emotions underlie grit and emotional intelligence.”—Peter Salovey, Professor of Psychology and President, Yale University, and discoverer of emotional intelligence 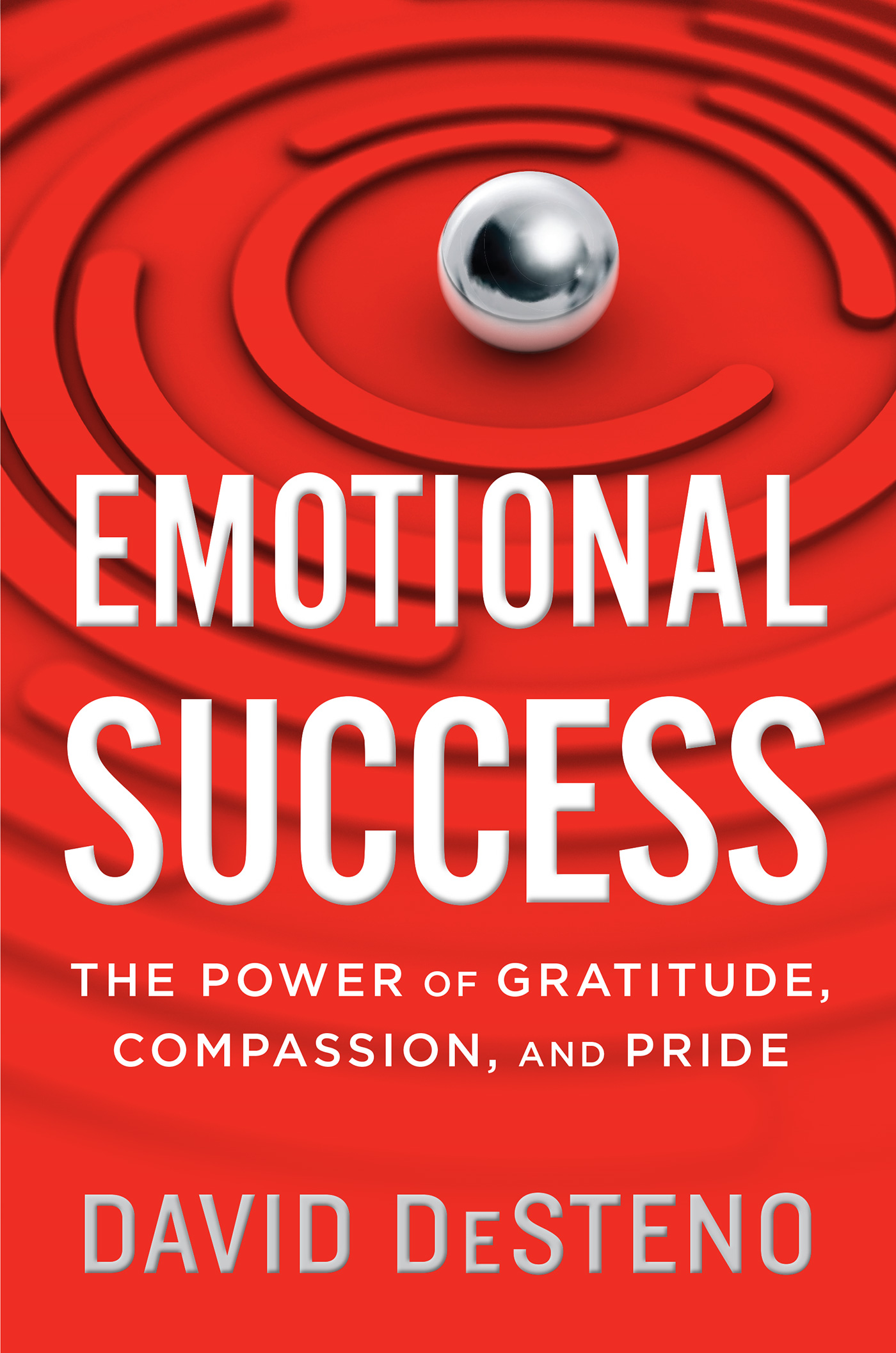