Sam has a large, close family: herself, her dad, and eleven elephants.

We Bought a Zoo meets Jurassic Park in a gripping story featuring the evergreen appeal of human-animal friendships and set in an elephant sanctuary, about a thirteen-year-old girl, a cast of elephants, and a surprising new arrival—a woolly mammoth.

Sam was born and raised in an elephant sanctuary. When a beloved elephant dies giving birth, Sam develops a connection with baby Woolly—who isn't actually an elephant but was cloned from woolly mammoth DNA. And the billionaire genius behind the cloning experiment will stop at nothing to protect his investment. Smart, determined, and loving, Sam stands up to this powerful adversary to protect the sanctuary and her herd. In the best tradition of child-animal friendship stories, Elephant Secret explores the strong and complex bond between Sam and her elephants while offering a fascinating, authentic glimpse into elephant—and human—behavior.

About the author
Eric Walters

Eric Walters has written nearly 100 children's books, which have been translated into 13 languages and won over 125 awards. He was named to the Order of Canada in 2014 for his contribution as an author of literature for children and young adults. Walters also runs The Creation of Hope, a charity providing care for orphans in the Mbooni District of Kenya. Visit him at www.ericwalters.net and on Twitter at @EricRWalters.

I lay on my back on the inflatable raft. The warm sun from above and the gentle rocking from below lulled me in and out of sleep. My arms hung down into the water, soothed and cooled. They needed it. Not just because it was a cloudless brilliant sky and the temperature was still above eighty, but because they were sore. I was sore in a lot of places. The tractor had broken down, and I’d pitched enough hay to feed an elephant. . . . Actually, a herd of elephants.

I hoped the tractor would be fixed by tomorrow, but there was no guarantee, nor that it wouldn’t be broken again in a week or two. So much of what we needed to run this place seemed to be held together by duct tape, baling wire, and hope. Sometimes it felt like hope alone kept it all going, and sometimes even hope was in short supply. I knew I shouldn’t complain. Things had been going a lot better since we got the—?

I felt something brush against my left hand, and my left arm was wrapped up in a tight grip.

I was dragged off the raft and pulled beneath the water, unable to escape, powerless to fight as I was going down. Mouth closed and eyes wide open, I found myself staring into a gigantic dark eye shining through the murky waters no more than a foot away. As quickly and powerfully as I’d been pulled under, I was thrust toward the surface, shot out of the water, and propelled into the air.

“You big stupid—?” I screamed before splashing back down into, and then under, the water.

I quickly rose to the surface to the sound of my father’s laughter. He was standing at the edge of the pond, laughing so hard he was practically doubled over. Beside him on both sides were elephants slowly moving into the water or standing half submerged.

“I’m glad you found that so funny!” I yelled as I treaded water. I reached out and grabbed my wet baseball cap, which was floating on the surface, and put it back on my head.

“It’s not just me, Samantha,” my father replied, still laughing. He was the only one who called me Samantha. Everybody else called me Sam. I pretended it bothered me. Really, I kind of liked it. “You know, even though the elephants didn’t laugh, they might have thought it was funny.”

Off to my side was the tip of a trunk, the snorkel, of the culprit. I could identify the trunk, but even if that weren’t the case, I’d know who had done this to me. It had to be Raja. Even if elephants don’t laugh, this one certainly liked to play jokes.

Slowly the trunk started to rise, followed by a domed forehead and two brown eyes. Of course it was Raja. He turned slightly to the side, and I could have sworn that he winked at me. He sank back down under the surface, his trunk disappearing with the rest of him. I saw the ripples and knew what was about to happen. Knowing it didn’t mean I could do anything about it.

Raja rose up beneath me, pushing against my feet and legs. I reached down to grab on, balancing, getting one leg on each side, until I was riding on his back. Floating forward toward the shore, Raja paddled along until I could feel the change in motion as his feet hit the bottom. His rolling gait carried him and me into the shallows, where he stood still.

“You’re going to stop here?” I asked him. “Couldn’t you at least take me to shore?”

He didn’t answer, but he didn’t move, either. I reached down and gave him a big scratch behind his left ear. That was his special spot, where he liked being scratched the best. Elephants don’t laugh and they don’t purr like cats, but if they did, Raja would have started to purr right then.

“If you keep rewarding bad behavior, you’re only reinforcing it, Samantha,” my father warned.

“Are you talking to me or Raja, Jack?”

“Well, if you can call me Samantha, I can call you Jack.”

“You know I’m going to keep calling you Samantha, so you have to decide what you’re going to call me. My preference would be Dad, or Daddy, or Pops, or even J-Dog.”

I couldn’t help but laugh. “You are the furthest thing from a rapper that I can even imagine.”

“Yeah? Toss me your baseball cap,” he said.

“Toss me your baseball cap—?you know, the thing that practically lives on top of your head.”

“You won’t die if you don’t wear it for a few seconds.”

I took off the cap and threw it down to him. He caught it and put it on his head—?backward. “Well, am I more rapper-like now?”

“That’s Daddy nut. Or you can just call me Dad.”

“How about you take off the hat and I’ll call you Dad?”

“I can agree to that,” he said as he took it off. “You know I probably have a better chance of training the elephants to do what I ask than I do of training you.”

“You don’t train a daughter.”

“Certainly not this one, anyway,” he agreed.

One by one, the entire herd, all eleven Asian elephants, had entered the pond. Some had disappeared completely. Others were snorkeling, only their trunks and the tops of their heads visible above the water. Some waded in with their backs breaking the surface.

There were so many sounds coming from the elephants. True, they didn’t purr or laugh, but they chirped, squeaked, squawked, clicked, and rumbled. People who get all their information from watching Disney cartoons think that elephants only trumpet. They do that—?and it’s amazing to hear—?but they make many other sounds as well.

Still standing in the shallows was Daisy Mae. I wanted to go and see her.

“Down!” I said to Raja. He reached back with his trunk and helped me slide down into the waist-deep water. I sloshed toward the shore.

“Hey, Daisy Mae, how are you doing?” I gave her trunk a gentle rub.

Daisy Mae was a terrible name for an Indian elephant, but it was the name she responded to. Every elephant that wasn’t born on the pr...

"Walters’ depiction of the bond that exists between Sam and her elephants is captivating. The elephants, who are presented as majestic and intelligent creatures with humanlike characteristics and rich emotional lives, will leave readers awestruck."--School Library Journal

"Walters interweaves his beautiful family story with a thorough description of elephant behavior—their intellect, compassion, and loyalty—and factual scientific possibilities of cloning an extinct species...A must-read for anyone with an interest in elephants and their welfare."--Booklist

"Walters packs in numerous details about these magnificent and highly intelligent creatures while raising complex ethical questions regarding humans’ relationship with animals."--Publishers Weekly 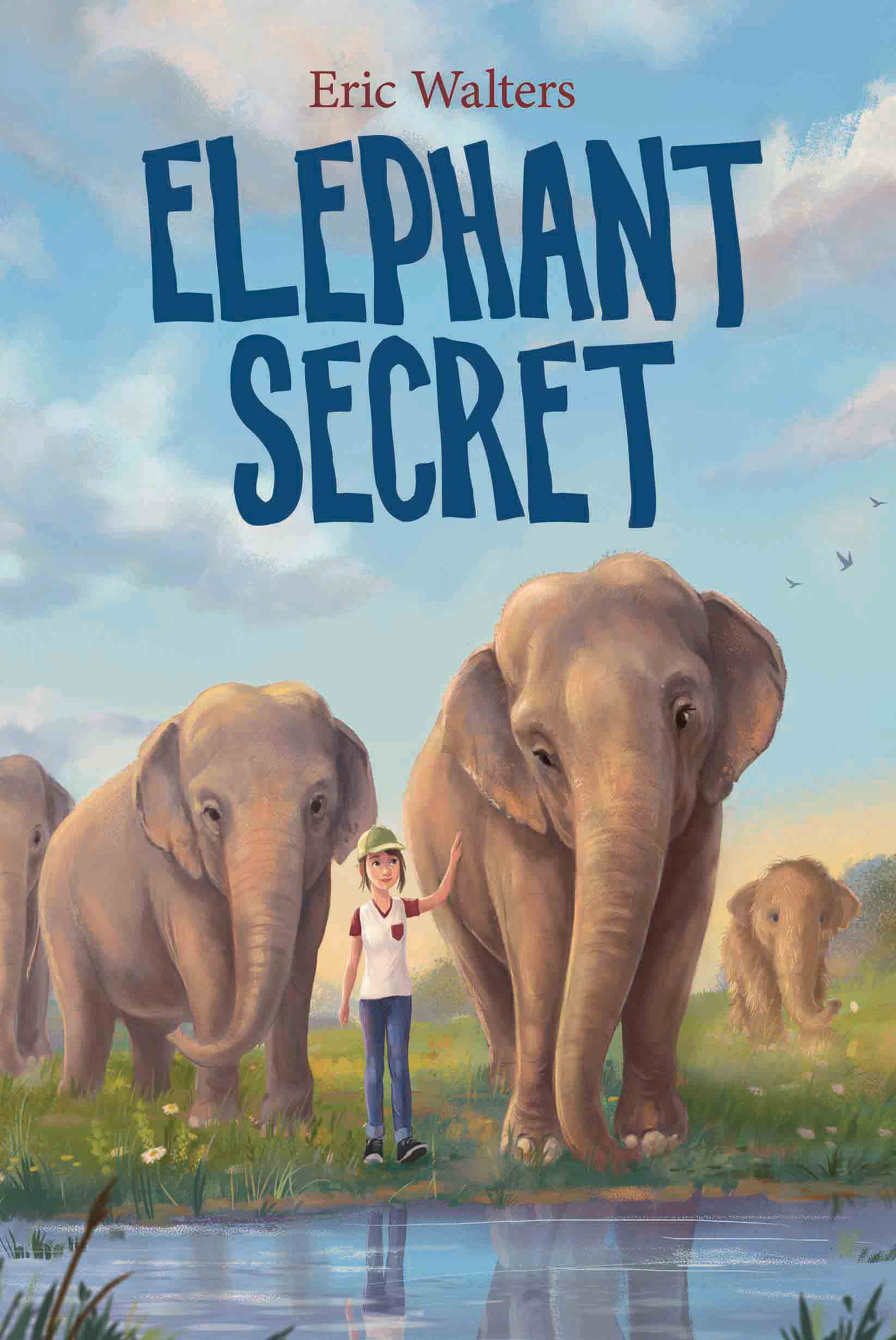