Dragons at Crumbling Castle: And Other Tales

by Terry Pratchett and Mark Beech
$8.99

Including more than one hundred black-and-white illustrations, the appealingly designed book celebrates Pratchett’s inimitable wordplay and irreverent approach to the conventions of storytelling. These accessible and mischievous tales are an ideal introduction for young readers to this beloved author. Established fans of Pratchett’s work will savor the playful presentation of the themes and ideas that inform his best-selling novels.

Mark Beech has illustrated numerous books for children, from picture books through young novels. He lives in England. Visit him at markbeechillustration.format.com

In the days of King Arthur there were no newspapers, only town criers, who went around shouting the news at the tops of their voices.

King Arthur was sitting up in bed one Sunday, eating an egg, when the Sunday town crier trooped in. Actually, there were several of them, including a man to draw the pictures, a jester for the jokes, and a small man in tights and soccer cleats who was called the Sports Page.

“DRAGONS INVADE CRUMBLING CASTLE,” shouted the News Crier (this was the headline), and then he said in a softer voice, “For full details hear page nine.”

King Arthur dropped his spoon in amazement. Dragons! All the knights were out on quests, except for Sir Lancelot—and he had gone to France for a vacation.

The Ninth Page came panting up, coughed, and said: “Thousands flee for their lives as family of green dragons burns and rampages around Crumbling Castle. . . .”

“What is King Arthur doing about this?” demanded the Editorial Crier pompously. “What do we pay our taxes for? The people of Camelot demand action. . . .”

“Throw them out and give them fourpence each,” said the king to the butler. “Then assemble the guard.”

Later that day, the king went out to the courtyard. “Now then, men,” he said. “I want a volunteer . . .” Then he adjusted his spectacles. The only other person in the courtyard was a small boy in a suit of mail much too big for him.

“Tom, John, Ron, Fred, Bill, and Jack are out sick,” said Ralph, counting on his fingers. “And William, Bert, Joe, and Albert are on vacation. James is visiting his granny. Rupert has gone hunting. And Eric . . .”

“Well then,” said the king, “Ralph, how would you like to visit Crumbling Castle? Nice scenery, excellent food, only a few dragons to kill. Take my spare suit of armor—it’s a bit roomy but quite thick.”

So Ralph got on his donkey and trotted across the drawbridge, whistling, and disappeared over the hills. When he was out of sight, he took off the armor and hid it behind a hedge, because it squeaked and was too hot, and put on his ordinary clothes.

High on a wooded hill sat a mounted figure in coal-black armor. He watched the young boy pass by, then galloped down after him on his big black horse.

“HALT IN THE NAME OF THE FRIDAY KNIGHT,” he cried in a deep voice, raising his black sword.

Ralph looked around. “Excuse me, sir,” he said. “Is this the right road to Crumbling Castle?”

“Well, yes, actually it is,” said the knight, looking rather embarrassed, and then he remembered that he was really a big bad knight and continued in a hollow voice, “BUT YOU’LL HAVE TO FIGHT ME FIRST!”

Ralph looked up in amazement as the black knight got off his horse and charged at him, waving his sword.

“Yield!” the knight yelled. Then he got his foot stuck in a rabbit hole, and he tripped over in a great clatter, like an explosion in a tin factory. Bits of armor flew everywhere.

There was silence for a moment, and then the helmet unscrewed itself, and Ralph saw that the Friday knight himself was a very small man indeed. Or, at least, he had a very small head.

“Certainly not!” said Ralph, and unsheathed his rusty sword. “I’ve won. You’ve fallen over first. I shall call you Fortnight, as my journey to Crumbling Castle and back should take no more than two weeks! You are my prisoner for that time, Sir Knight!”

There was a great deal of clanking inside the armor, and then Fortnight climbed out through a trap door in the back. His ferocious black armor was three times as big as he was.

So Ralph continued his journey to Crumbling Castle on his donkey, followed by Fortnight the Friday knight on his great black charger. After a while they became quite friendly, because Fortnight knew lots of jokes and could sing quite well. He’d belonged to a circus before he became a knight.

The next day they found a wizard sitting on a milestone, reading a book. He had the normal wizard’s uniform: long white beard, pointed hat, a sort of nightgown covered in signs and spells, and long floppy boots, which he had taken off, revealing red socks.

“Excuse me, sir,” said Ralph, because you have to be careful when talking to wizards. “Is this the way to Crumbling Castle?”

“Thunder and lightning! Yes,” said the wizard, closing his book with a snap. “Do you mind if I come too? I’ve got a few antidragon spells I’d like to try out.”

He said his name was Fossfiddle, and he was sitting by the road because his magic seven-league boots had broken down. He pointed out the pair of high brown boots by the milestone: magic boots are handy things—you can walk as far as you like in them without getting tired—but Fossfiddle’s needed a bit of work done on them.

The land around them grew grimmer and grimmer, and black mountains loomed up on either side. Gray clouds covered the sun, and a cold wind sprang up. The three of them plodded on and came to a cave hidden in a clump of thornbushes.

“We could do with a fire,” said Ralph.

“Nothing easier,” said Fossfiddle. He muttered something and produced a funny-looking glass bulb, a small hat, a banana, and a brass candlestick. It wasn’t that he was a bad wizard: he just got things mixed up. And if he had but known it, the funny-looking bulb was several centuries ahead of itself.

After Fortnight had lit a fire, they settled down around it and Ralph and Fossfiddle dozed off. But Fortnight thought he could hear something.

Crack! went a stick in the bushes. Something was sneaking toward them.

Fortnight picked up his sword and crept toward the bushes. Something was moving in them, something with very large feet. The night was very dark, and somewhere an owl hooted.

“Yield!” yelled Fortnight, and dashed into the bushes. This woke up Ralph and Fossfiddle, who heard a great cracking and bashing about. They got up and ran to Fornight’s help.

For five minutes there was no sound to be heard but swishings—and swear words when people trod on thorns. It was so dark, nobody knew if anything was sneaking up behind them, so they kept tur...

"Feature[s] characters heroic or hiss-worthy, pranks and battles aplenty, sly twists on the familiar tropes and his trademark mix of silly humor and accurate moral commentary."

"It's a pleasure to read Pratchett's reflections in his introduction and to see his signature warmth, wit, and intelligence light up these simple stories. Appearing throughout the book, Beech's amusing ink-and-wash drawings perfectly capture the magic of the tales reminiscnet of Quentin Blake's illustrations."

"My son and I discovered Terry Pratchett's books together, when he was about eleven years old. He'd be reading on his own and would start to laugh, and then eagerly read the passage aloud to me—and I'd do the same to him! Pratchett's books became a shared source of delight for us back then, and they still are today."

"Accompanied by Beech’s wiry Quentin Blake–like illustrations, as well as numerous typographical flourishes, this volume will please both its intended audience and older Pratchett completists."

"Middle grade readers who enjoy Pratchett's other works or Dalh's tales are bound to enjoy this one." 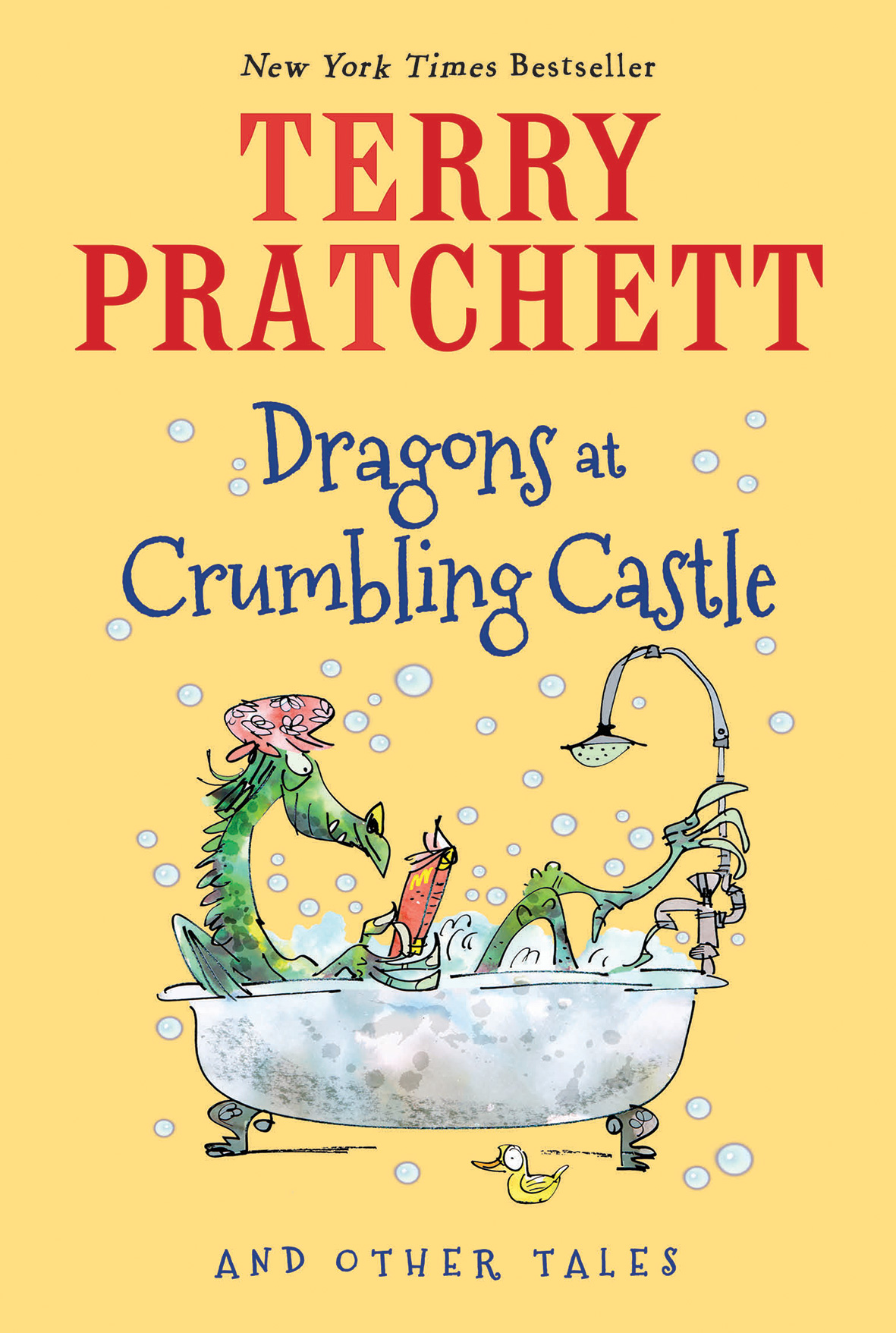