Dirt Bikes, Drones, and Other Ways to Fly

Video gamer and daredevil dirt bike rider Arlo Santiago is recruited by the U.S. military at White Sands to pilot drone missions in Pakistan. When the game becomes all too real, how will Arlo reconcile his duty with the violent death that haunts his family?

Seventeen-year-old Arlo Santiago lives for the “Drone Zone”—that free, joyful, anti-gravity feeling. He achieves the Zone with risky motorcycle stunts on New Mexico roads, or while playing his favorite video game, Drone Pilot. His gaming skills are so off-the-charts, he’s recruited by the U.S. Air Force to remotely operate real-life drones in Pakistan. How can he refuse the paycheck when his little sister’s health is at stake? This pull-no-punches novel soars, with poetic style, focus on friends and family, philosophical life-and-death musings, and vividly drawn setting of a land “at the intersection of mesa dust and tractor rust.”

About the author
Conrad Wesselhoeft

Kenya Man  explodes out of my phone:

At the corner of Sunset and La Brea.

I jerk out of REM sleep, level nine. Scramble and find my phone wedged under El Guapo’s ass, punch in.

But instead of Cam or Lobo on the other end, it’s some space cowboy.

“Hello, is this Arlo Santiago?”

Everything about the voice sounds like a jail door clanging shut.

“Am I speaking with Arlo Spencer Santiago?” “Uhhhhhhhmm . . .”

El Guapo—“The Handsome One”—arches his back and starts to hump me, his way of saying good morning. I shove him, and he tumbles ass-over-floppy-ears onto the floor. Then he pops up and grins at me.

He’s always grinning. Humping and grinning. He’s the grin- ningest, humpingest dog in the world. Probably the only stan- dard poodle in all northeast New Mexico.

I glance at the clock—6:55 a.m. Damn, just what I need, a recruiter calling me at this hour. Messing with my routine.

I’ve polished my mornings to perfection. On the one hand, I give myself Maximum Sleep (MS)—sleep to the very last mil- lisecond. On the other hand, once Kenya Man starts rapping, I’m up, moving fast. In five seconds, I’ve accelerated to Maximum Efficiency (ME). Not to say I’m totally awake; I’m not. But my body knows all the moves, how to cut the corners.

On a blackboard, you can write it this way:

I have exactly two minutes and twenty-seven seconds to piss, slap water on my face, get dressed, and eat breakfast.

But first I’ve got to deal with this tool.

“It’s an honor to speak with a world champion,” the man says. I rub sleep off my face. “Hey, who is this again?”

“Nice job yesterday on Drone Pilot,” he says. “You finally beat him.”

“Beat who?” “SergeiTashkent, of course.’” Now he has my attention.

El Guapo leaps onto the bed and thrusts his shaggy hips at me. Hump and grin, hump and grin—only God knows the mind of a high desert poodle.

“Arlo, we’ve been following you on the leaderboards for some time,” the man says. “Last night, we watched you knock Sergei out of the number one position on Drone Pilot. Sergei’s a superb UAV pilot, technically the best we’ve ever seen. And you beat him. That was extremely smart flying.”

I clamp my hand on El Guapo’s snout. He freezes mid-hump.

“Look,” I say, glancing around for my jeans. “I don’t want to join the air force.”

“I’d like to invite you to join us for war games this Saturday at White Sands.”

“You’ll get to test your skills against real pilots—some of our very best.”

“Not a plane, Arlo, a drone. You definitely know how to fly one of those. We know that very well. It’s just like your game Drone Pilot. The difference is, we make it real.”

“Dude,” I say, “this is way too much information. And I’m late for school.”

“Sure, Arlo, I’ll check in later. Start thinking about Saturday.”

Then it hits me—it’s Lobo’s Uncle Sal again—our local joker and genius entrepreneur. Owner of the best coffee shop in town, and my sky-diving instructor for the past three years.

Uncle Sal has a gift for faking voices. For some reason, I’m one of his favorite targets. Last time, he wanted me to enter a Rocky Mountain oyster eating contest sponsored by the Daughters of the American Revolution.

Lobo would’ve told him about my win yesterday. About se- riously kicking SergeiTashkent’s butt, knocking him to number two on the Drone Pilot leaderboard, which I’ve been trying to do all year.

I am now the number one drone combat pilot in the world—the virtual world, that is—until somebody kicks my butt.

In video games, when you reach number one, your butt is out there, cheeks flapping in the wind, for anybody to kick—Sergei- Tashkent, ToshiOshi, IpanemaGirl, anybody.

There are seven billion anybodies in the world.

Just the thought of Uncle Sal . . . I start to laugh. In fact, I laugh so hard I trip putting on my jeans. Damn, I’m late.

Dad walks in, all frayed, scratching, and barely employed. He taps his watch.

“Can I have five bucks for lunch?”

He winces, opens his wallet—puffy with poverty—and holds out three faded ones. Says his daily mantra: “Spend it wisely.”

“Always do,” I say, and snatch the money.

Dad runs the concession stand at Rio Loco Field. It’s a huge comedown after running a newspaper, but, hey, it pays a few bills.

Jeopardy is one of the highlights of the football season. The halftime show is ten times better than the game itself.

I dig two unmatched socks from under my bed and sniff them. It’s been five months since I’ve found clean, folded, matching socks in my top drawer. That’s one little difference in not having a mom anymore.

“A moving story about loss, love, and learning to let go.”—School Library Journal

“Features both a supporting cast lit up with larger-than-life characters and a protagonist who loves flying recklessly close to the edge but makes right choices in the clutch.”—Booklist 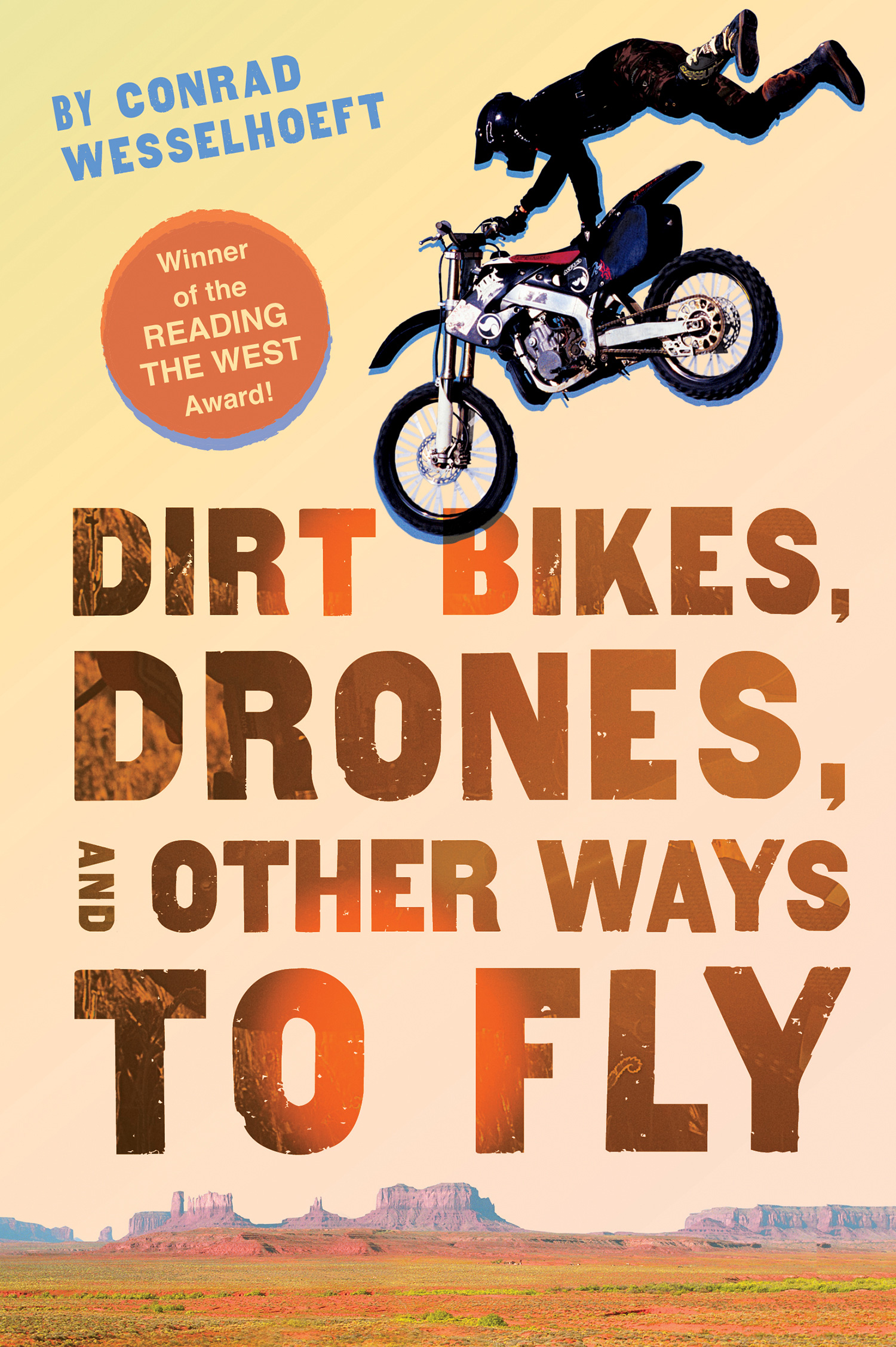