ALL THE BRIGHT PLACES meets JUNO in this heartbreaking and humorous novel about three teens in a small town whose lives intersect in ways they never expected, teaching them that there are no one-size-fits-all definitions of depression, friendship, and love.

Reggie isn’t really a romantic: she’s been hurt too often, and doesn’t let people in as a rule. Plus, when you’re dealing with the Three Stages of Depression, it’s hard to feel warm and fuzzy. When Reggie meets Snake, though, he doesn’t give her much of a choice. Snake has a neck tattoo, a Twizzler habit, and a fair share of arrogance, but he’s funny, charming, and interested in Reggie.

Definitions of Indefinable Things follows three teens as they struggle to comprehend love, friendship, and depression—and realize one definition doesn’t always cover it.

About the author
Whitney Taylor

Whitney Taylor is a YA writer who only speaks one language--fangirl. When she's not devouring books, she spends here time taking selfies, obssesing over any TV show with a love triangle, and eating too much McDonald's. She's an English and Psychology major from Virginia who likes to pretend she's a supermodel from New York City. Visit her on Twitter @WhitneyTayy, and on Instagram @whitneytaylor4.

Nothing made me want to get hit by a bus more than Tuesday night happy pill (see: Zoloft) runs. After a lengthy car ride with my mother, who spent all ten minutes singing a God-awful Christian melody and praying for the state of my wayward soul, I’d have to physically restrain my hands to keep myself from shoving the door open and rolling out onto the highway. Sometimes I prayed, too. That a piano would fall from the sky and crush my miserable, suburban existence. Or that God would set CVS on fire to spare me from having to choose between Mickey Mouse and Flintstones gummy vitamins. Since I was, quite unfortunately, still alive, I took it that God couldn’t hear me over my mother’s off-key rendition of “Amazing Grace.” Or maybe he just didn’t bother noticing the pitiful lives of Flashburn inhabitants at all.

Once we made it inside CVS, my mother always played this super annoying game of Find the Most Lame Thing and Force It on Reggie. She used to do this to my brother, Frankie, when she took him clothes shopping. Which probably explains why he turned out to be a sweater-vest-wearing, pleated-pants-enthusiast youth pastor five hundred miles away.

“Regina, look at this little notebook,” she exclaimed right on cue, lifting up a composition journal with a cartoon duck on the front. “This would be perfect for you to journal in.”

I rolled my eyes. “Great idea, Karen. I’ll write about how much I hate baby ducks inside a baby duck. It’ll be one giant eff you to ducks everywhere.”

“Don’t call me Karen,” she scolded. “You know I don’t like that. And don’t insinuate curse words.”

She adjusted her cat-eye glasses and sighed. “I just thought it would be nice for you to have a journal so you can start writing your feelings down like Dr. Rachelle advised.”

“What would be nice is if you and Dr. Rachelle stopped forcing activities on me like there’s actually a chance in—” She raised both brows in a warning. “Hades, that I’ll enjoy it.”

“We just want you to be happy, sweetheart.”

There was a difference between being happy and being distracted, but I knew Karen wouldn’t understand. And picking one of our signature back-and-forths (see: screaming matches) in the middle of the school supplies aisle seemed a bit melodramatic.

Somehow, I was able to break away from Karen with minimal objection. I was halfway through the store before she could call my name from the creams and ointment aisle, but when she did, it was something like, “Reggie, do you still have that pesky rash on your backside?”

I didn’t respond. Needless to say, her fascination regarding the condition of my ass went unsatisfied. Set on autopilot, I ended up at the back of the store where the pharmacist was rearranging cases on a shelf. When she saw me, she smiled politely and moved to the counter.

She glanced at a sheet of paper. “Birthdate?”

“Okay, that will be ready in about eight to ten minutes if you would like to wait around. Sorry for the delay. We’ve had an influx of orders with it being allergy season.”

“That’s all right. Thanks.”

I’d started scanning for a place to sit when some guy practically shoved me to the side. “Excuse me, prescription refill for Prozac. Last name Eliot,” he said to the pharmacist.

She nodded, marking the paper. “Birthdate?”

“That will be ten minutes if you would like to wait.”

He turned and caught a glimpse of my vengeful stare. Brown hair hung loosely in front of his eyes, toppling over his ears. He had this stupid, diamond-shaped tattoo on the left side of his neck that looked like it was done by one of those wannabe tattoo artists who work from their garage and use bum needles that give people bacterial infections. His grungy THE RENEGADE DYSTOPIA band T-shirt crept out from behind his acid-washed jacket.

“That band sucks,” I mumbled just as he was about to walk away.

He stopped directly in front of me. “Interesting observation,” he responded; his raspy voice sounded like he was recovering from a nasty cold. “I find that their irreverence toward the norms of modern age grunge culture is kind of their appeal.”

“Maybe to people who are so desperate to be original that they’re actually more banal than everyone else.”

He glanced down at the shirt with the stupid band. “You’re right,” he said, sliding his arms out of the jacket.

“What are you doing?”

He lifted the shirt over his head, exposing a white T-shirt underneath it. “The band is shit. I mean, they sing the same lyric eight times in a row and call it a song. It’s pathetic.”

“Then why were you wearing the shirt?”

“I guess to send a message.”

“I like shit music and need a pretentiously opinionated emo girl leaning against a rack of laxatives to help me with my taste.”

Dulcolax (see: terrible first impression) caught my eye the second I dared take a look behind my head. “Your taste in music should be the least of your worries,” I said, crossing my arms across my black sweater as if to declare the laxative display my territory. At least it wasn’t feminine products. That could have gotten awkward. “Prozac is the worst antidepressant on the market. I couldn’t fall asleep for days when I was on it.”

“Don’t forget the dizziness,” he added. “I tripped in the shower and about busted my head on the toilet. They don’t show you that on the commercials.”

“Nope. Not unless the sun was beaming through your window or you were on a bike.”

“Man,” he said, snapping his fingers. “The one time I don’t ride a bike in the shower.”

He was staring at me with a weirdly attractive grin on his face, and I felt like telling him to screw off. But there was a slight anger in his snarled mouth, like he disdained convention and flirty conversations...

"...Offbeat romance, sarcastic humor, and the philosophy of life come together in a flying bildungsroman that is both touching and entertaining in its exploration of the internal conflicts of the human condition. With plain but evocative prose and a pair of ceaselessly endearing protagonists, Definitions of Indefinable Things is perfect for readers of middle school age and above." –VOYA

"An emotionally engrossing and powerful exploration of depression and healing that many teens will find meaningful."

A compelling exploration of mental illness." 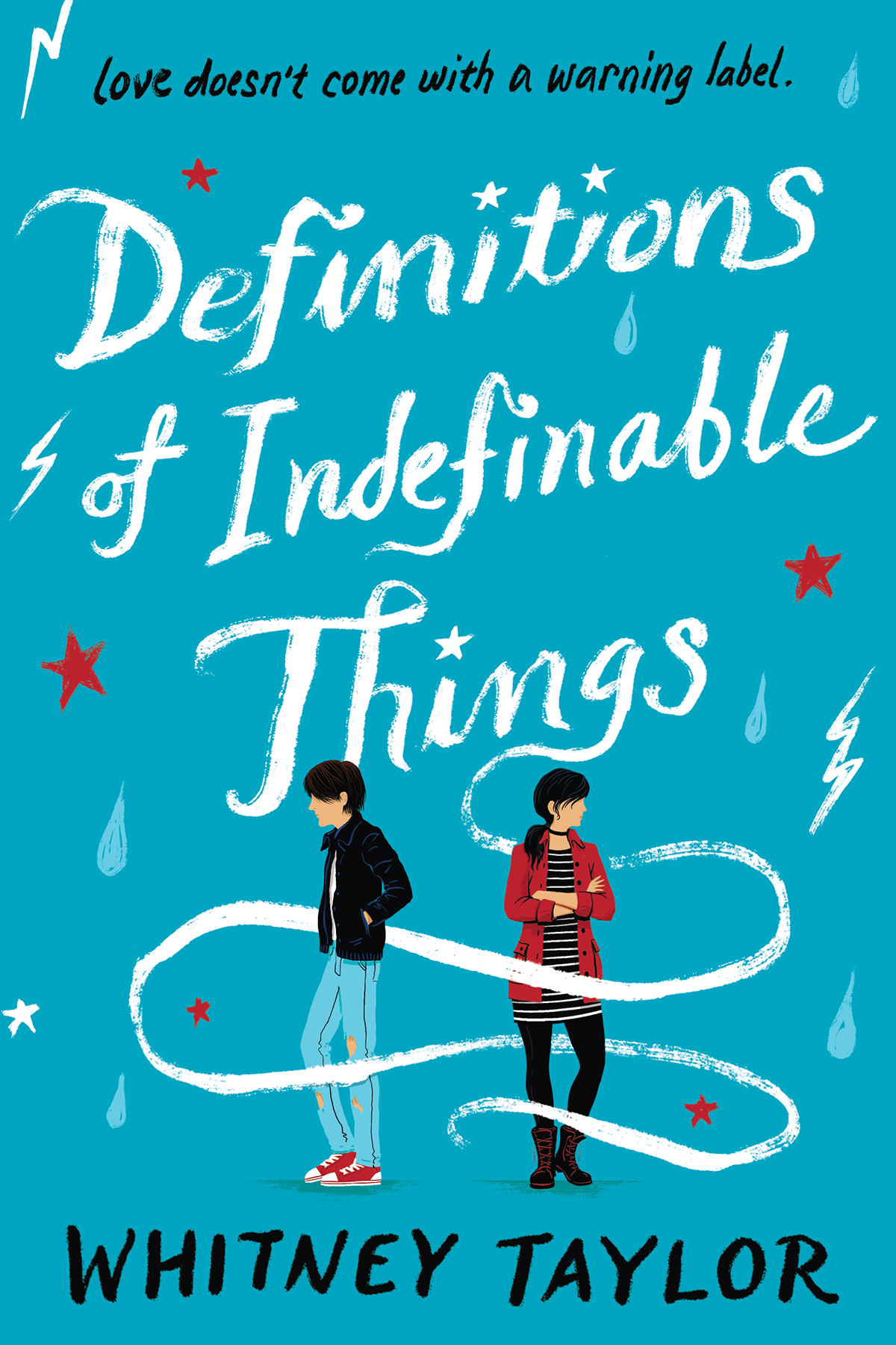