Deep: Freediving, Renegade Science, and What the Ocean Tells Us About Ourselves

The ocean's depths contain wondrous biology and clues to unimagined human abilities, as intrepid researchers and athletes are now discovering.

Deep is a voyage from the ocean’s surface to its darkest trenches, the most mysterious places on Earth. Fascinated by the sport of freediving—in which competitors descend great depths on a single breath—James Nestor embeds with a gang of oceangoing extreme athletes and renegade researchers. He finds whales that communicate with other whales hundreds of miles away, sharks that swim in unerringly straight lines through pitch-black waters, and other strange phenomena. Most illuminating of all, he learns that these abilities are reflected in our own remarkable, and often hidden, potential—including echolocation, directional sense, and the profound bodily changes humans undergo when underwater. Along the way, Nestor unlocks his own freediving skills as he communes with the pioneers who are expanding our definition of what is possible in the natural world, and in ourselves.

“Nestor pulls us below the surface into a world far beyond imagining and opens our eyes to these unseen places.” —Dallas Morning News

“This is popular science writing at its best.” —Christian Science Monitor

About the author
James Nestor

JAMES NESTOR has written for Outside Magazine, Men's Journal, Dwell Magazine, the New York Times, San Francisco Magazine, Interior Design, the San Francisco Chronicle, and numerous other publications. His longform piece "Half-Safe," about the only around-the-world journey by land and sea in the same vehicle ever attempted (and completed), was published by The Atavist. Nestor lives in San Francisco and is a member of the San Francisco Writers' Grotto.

I’m a guest here, a journalist covering a sporting event that few people have heard of: the world freediving championship. I’m sitting at a cramped desk in a seaside hotel room that overlooks a boardwalk in the resort town of Kalamata, Greece. The hotel is old and shows it in the cobweb cracks along the walls, threadbare carpet, and dirt shadows of framed pictures that once hung in dim hallways.

I’ve been sent here by Outside magazine, because the 2011 Individual Depth World Championship is a milestone for competitive freediving—the largest gathering of athletes in the history of the little-known sport. Since I’ve lived my whole life by the ocean, still spend much of my free time in it, and often write about it, my editor thought I’d be a good fit for the assignment. What he didn’t know was that I had only a superficial understanding of freediving. I hadn’t done it, didn’t know anyone who had, and had never seen it before.

I spend my first day in Kalamata reading up on the competition rules and the sport’s rising stars. I’m not impressed. I Google through photographs of competitive freedivers in mermaid outfits, flashing hang-loose signs while floating upside down in the water, and blowing intricate bubble rings from the bottom of a swimming pool. It seems like the kind of oddball hobby people take up, like badminton or Charleston dancing, so they can talk about it at cocktail parties and refer to it in their e-mail handles.

Nonetheless, I have a job to do. At five thirty the following morning, I’m at the Kalamata marina talking my way onto a twenty-seven-foot sailboat that belongs to a scruffy Quebecois expat. His is the only spectator boat allowed out at the competition, which is held in the deep open waters about ten miles from the Kalamata marina. I’m the only journalist aboard. By 8:00 a.m., we’ve tied up to a flotilla of motorboats, platforms, and gear that serves as the competitors’ jumping-off point. The divers in the first group arrive and take positions around three yellow ropes dangling off a nearby platform. An official counts down from ten. The competition begins.

What I see next will confound and terrify me.

I watch as a pencil-thin New Zealander named William Trubridge swallows a breath, upends his body, and kicks with bare feet into the crystalline water below. Trubridge struggles through the first ten feet, heaving broad strokes. Then, at about twenty feet, his body loosens, he places his arms by his sides in a skydiver pose, and he sinks steadily deeper until he vanishes. An official watching a sonar screen at the surface follows his descent, ticking off distances as he goes down: “Thirty meters . . . forty meters . . . fifty meters.”

Trubridge reaches the end of the rope, some three hundred feet down, turns around, and swims back toward the surface. Three agonizing minutes later, his tiny figure rematerializes in the deep water, like a headlight cutting through fog. He pops his head up at the surface, exhales, takes a breath, flashes an okay sign to an official, then gets out of the way to make room for the next competitor. Trubridge just dove thirty stories down and back, all on one lungful of air—no scuba gear, air tube, protective vest, or even swim fins to assist him.

The pressure at three hundred feet down is more than ten times that of the surface, strong enough to crush a Coke can. At thirty feet, the lungs collapse to half their normal size; at three hundred feet, they shrink to the size of two baseballs. And yet Trubridge and most of the other freedivers I watch on the first day resurface unscathed. The divers don’t look forced either, but natural, as if they all really belong down there. As if we all do.

I’m so dazzled by what I see that I need to tell somebody immediately. I call my mother in Southern California. She doesn’t believe me. “It’s impossible,” she says. After we talk about it, she dials some friends of hers who’ve been avid scuba divers for forty years and then calls me back. “There is an oxygen tank at the seafloor or something,” she says. “And I suggest you do your research before publishing any of this.”

But there was no oxygen tank at the end of the rope, and if there had been, and if Trubridge and the other divers had actually breathed some of it before ascending, their lungs would have exploded when the air from the tank expanded in the shallower depths, and their blood would have bubbled with nitrogen before they reached the surface. They’d die. The human body can withstand the pressures of a fast three-hundred-foot underwater ascent only in its natural state.

Some humans handle it better than others.

Over the next four days, I watch several more competitors attempt dives to around three hundred feet. Many can’t make it and turn back. They resurface with blood running down their faces from their noses, unconscious, or in cardiac arrest. The competition just keeps going on. And, somehow, this sport is legal.

For most of this group, attempting to dive deeper than anyone—even scientists—ever thought possible is worth the risk of paralysis or death. But not for all of them.

I meet a number of competitors who approach freediving with a more sane outlook. They aren’t interested in the face-off with mortality. They don’t care about breaking records or beating the other guy. They freedive because it’s the most direct and intimate way to connect with the ocean. During that three minutes beneath the surface (the average time it takes to dive a few hundred feet), the body bears only a passing resemblance to its terrestrial form and function. The ocean changes us physically, and psychically.

In a world of seven billion people, where every inch of land has been mapped, much of it developed, and too much of it destroyed, the sea remains the final unseen, untouched, and undiscovered wilderness, the planet’s last great frontier. There are no mobile phones down there, no e-mails, no tweeting, no twerking, no car keys to lose, no terrorist threats, no birthdays to forget, no penalties for late credit card payments, and no dog shit to step in before a job interview. All the stress, noise, and distractions of life are left at the surface. The ocean is the last truly quiet place on Earth.

These more philosophical freedivers get a glassy look in their eyes when they describe their experiences; it’s the same look one sees in the eyes of Buddhist monks or emergency room patients who have died and then been resuscitated minutes later. Those who have made it to the other side. And best of all, the divers will tell you, “It’s open to everyone.”

Freediving flies in the face of everything I know about surviving in the ocean; you turn your back on the surface, swim away from your only source of air, and seek out the cold, pain, and danger of deep waters. Sometimes you pass out. Sometimes you bleed out of your nose and mouth. Sometimes you don&...

iTunes Top 20 Books of the Month

BBC Book of the Week

The Week Book of the Week

“The deeper the book ventures into the ocean, the more dramatic and unusual the organisms therein and the people who observe them…Through [Nestor's] eyes and his stories, it’s a journey well worth taking.”

"Fascinating, informative, exhilarating book, and, I wager, it will at the very least have you testing how long you can hold your breath."

"An engaging exploration of the depths of the world's oceans and the human connection to the rapidly changing world below. This is popular science writing at its best."

"Rich and illuminating ... A passionate celebration of the possible and the unproven ... [Deep] will certainly enrich the thinking of anyone planning to spend time at the beach."

"Truly breathtaking ... Nestor gets right in with the competitors and rogue scientists who are unearthing mysteries of the deep and its inhabitants that we can't even imagine, in a book that's engaging and eye-popping."

"Nestor is crisp with his fun, seafaring facts; he is sober with his sprinkling of environmental bulletins. The book neverpreaches, and it’s a zippy read."

"Freediving, the sport that harnesses the mammalian dive reflex to survive deep plunges, can be a boon for marine researchers, avers James Nestor. We meet a salty cast of them, such as the 'aquanauts' of Aquarius, a marine analogue of the International Space Station submerged off the Florida Keys. Equally mesmeric are Nestor's own adventures, whether spotting bioluminescent species from a submarine in the bathypelagic zone, or freediving himself — and voyaging into humanity's amphibious origins in the process."

"Put Deep at the top of your reading list. This book will do for the oceans what Cosmos did for space. It's mind-bending, intrepid, and inspiring."

"With verve and humor, the author describes his own risk-taking attempts to understand the ocean's ancient secrets and future potential and the daring and brilliant people who have dedicated their lives to probing deeper ... [Nestor's] writing is sharp, colorful, and thrilling ... Bring[s] the ocean to life from a research perspective as well as a human one. An adventurous and frequently dazzling look at our planet's most massive habitat."

"A thrilling account, made timely by the rapidly changing state of earth’s most expansive environment." —Publishers Weekly 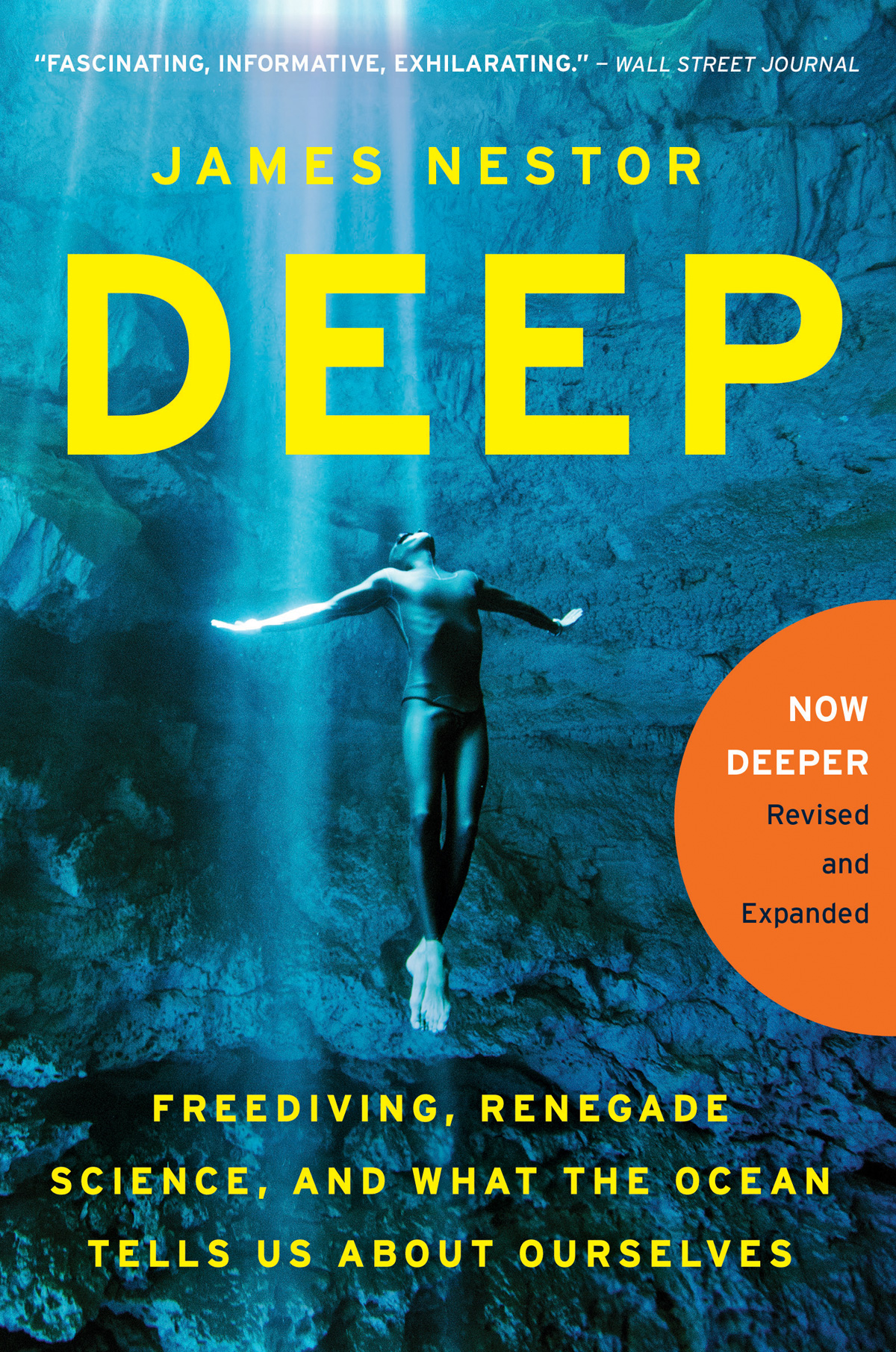