Nobel Prize-winner Jose Saramago's brilliant new novel poses the question -- what happens when the grim reaper decides there will be no more death?

Nobel Prize-winner Jose Saramago's brilliant novel poses the question—what happens when the grim reaper decides there will be no more death?

On the first day of the new year, no one dies. This of course causes consternation among politicians, religious leaders, morticians, and doctors. Among the general public, on the other hand, there is initially celebration—flags are hung out on balconies, people dance in the streets. They have achieved the great goal of humanity: eternal life. Then reality hits home—families are left to care for the permanently dying, life-insurance policies become meaningless, and funeral parlors are reduced to arranging burials for pet dogs, cats, hamsters, and parrots.

Death sits in her chilly apartment, where she lives alone with scythe and filing cabinets, and contemplates her experiment: What if no one ever died again? What if she, death with a small d, became human and were to fall in love?

The following day, no one died. this fact, being

absolutely contrary to life’s rules, provoked enormous and, in

universal history there is no mention, not even one exemplary

case, of such a phenomenon ever having occurred, for a whole

day to go by, with its generous allowance of twenty- four hours,

diurnal and nocturnal, matutinal and vespertine, without one

death from an illness, a fatal fall, or a successful suicide, not one,

not a single one. Not even from a car accident, so frequent on

festive occasions, when blithe irresponsibility and an excess of

death first. New year’s eve had failed to leave behind it the usual

calamitous trail of fatalities, as if old atropos with her great

bared teeth had decided to put aside her shears for a day. There

was, however, no shortage of blood. Bewildered, confused, distraught,

struggling to control their feelings of nausea, the firemen

bodies that, according to the mathematical logic of the collisions,

should have been well and truly dead, but which, despite

the seriousness of the injuries and lesions suffered, remained

alive and were carried off to hospital, accompanied by the shrill

sound of the ambulance sirens. None of these people would die

along the way and all would disprove the most pessimistic of

medical prognoses, There’s nothing to be done for the poor

man, it’s not even worth operating, a complete waste of time,

said the surgeon to the nurse as she was adjusting his mask. And

the day before, there would probably have been no salvation for

this particular patient, but one thing was clear, today, the victim

throughout the country. Up until the very dot of midnight

compliance with the rules, both those relating to the nub of

the matter, i.e. the termination of life, and those relating to the

many ways in which the aforementioned nub, with varying degrees

of pomp and solemnity, chooses to mark the fatal moment.

the person involved, was that of the very ancient and venerable

queen mother. At one minute to midnight on the thirty- first of

december, no one would have been so ingenuous as to bet a

spent match on the life of the royal lady. With all hope lost, with

the doctors helpless in the face of the implacable medical evidence,

the royal family, hierarchically arranged around the bed,

waited with resignation for the matriarch’s last breath, perhaps

a few words, a final edifying comment regarding the moral ed-

ucation of the beloved princes, her grandsons, perhaps a beautiful,

well- turned phrase addressed to the ever ungrateful memory

of future subjects. And then, as if time had stopped, nothing

happened. The queen mother neither improved nor deteriorated,

she remained there in suspension, her frail body hovering

on the very edge of life, threatening at any moment to tip

over onto the other side, yet bound to this side by a tenuous

thread to which, out of some strange caprice, death, because it

could only have been death, continued to keep hold. We had

passed over to the next day, and on that day, as we said at the

beginning of this tale, no one would die.

It was already late afternoon when the rumor began to

spread that, since the beginning of the new year, or more precisely

since zero hour on this first day of january, there was no

record in the whole country of anyone dying. You might think,

for example, that the rumor had its origins in the queen mother’s

her, but the truth is that the usual medical bulletin issued to the

state of the royal patient had shown visible signs of improvement

during the night, it even suggested, indeed implied,

choosing its words very carefully, that there was a chance that

her royal highness might be restored to full health. In its initial

form, the rumor might also have sprung, naturally enough,

from an undertaker’s, No one seems to want to die on this first

day of the new year, or from a hospital, That fellow in bed

other, or from a spokesman for the traffic police, It’s really odd,

you know, despite all the accidents on the road, there hasn’t been

a single death we can hold up as a warning to others. The rumor,

whose original source was never discovered, although, of course,

this hardly mattered in the light of what came afterward, soon

reached the newspapers, the radio and the television, and immediately

caused the ears of directors, assistant directors and

editors- in- chief to prick up, for these are people not only

primed to sniff out from afar the major events of world history,

they’re also trained in the ability, when it suits, to make those

events seem even more major than they really are. In a matter

of minutes, dozens of investigative journalists were out on the

street asking questions of any joe schmo who happened by, while

the ranks of telephones in the throbbing editorial offices stirred

and trembled in an identical investigatory frenzy. Calls were

made to hospitals, to the red cross, to the morgue, to funeral directors,

to the police, yes, all of them, with the understandable

exception of the secret branch, but the replies given could be

summed up in the same laconic words, There have been no

deaths. A young female television reporter had more luck when

she interviewed a passer- by, who kept glancing alternately at her

and at the camera, and who described his personal experience,

which was identical to what had happened to the queen mother,

The church clock was striking midnight, he said, when, just before

the last stroke, my grandfather, who seemed on the very

point of expiring, suddenly opened his eyes as if he’d changed

his mind about the step he was about to take, and didn’t die.

The reporter was so excited by what she’d heard that, ignoring

all his pleas and protests, No, senhora, I can’t, I have to go to the

chemist’s, my grandfather’s waiting for his prescription, she

bundled him into the news car, Come with me, your grandfather

doesn’t need prescriptions any more, she yelled, and ordered the

driver to go straight to the television studio, where, at that precise

moment, everything was being set up for a debate between

to analyze and give their views on what certain wags, the

kind who have no respect for anything, were already beginning

to refer to as a death strike. The bold reporter was, however, laboring

under the gravest of illusions, for she had interpreted the

words of her interviewee as meaning that the dying man had,

quite literally, changed his mind about the step he was about to

take, namely, to die, cash in his chips, kick the bucket, and so

had decided to turn back. Now, the words that the happy grandson

had pronounced, As if he’d changed his mind, were radically

different from a blunt, He changed his mind. An elementary

knowledge of syntax and a greater familiarity with the elasti...

"Saramago is arguably the greatest writer of our time . . . He has the power to throw a dazzling flash of lightning on his subjects, an eerily and impossibly prolonged moment of clarity that illuminates details beyond the power of sunshine to reveal."—Chicago Tribune 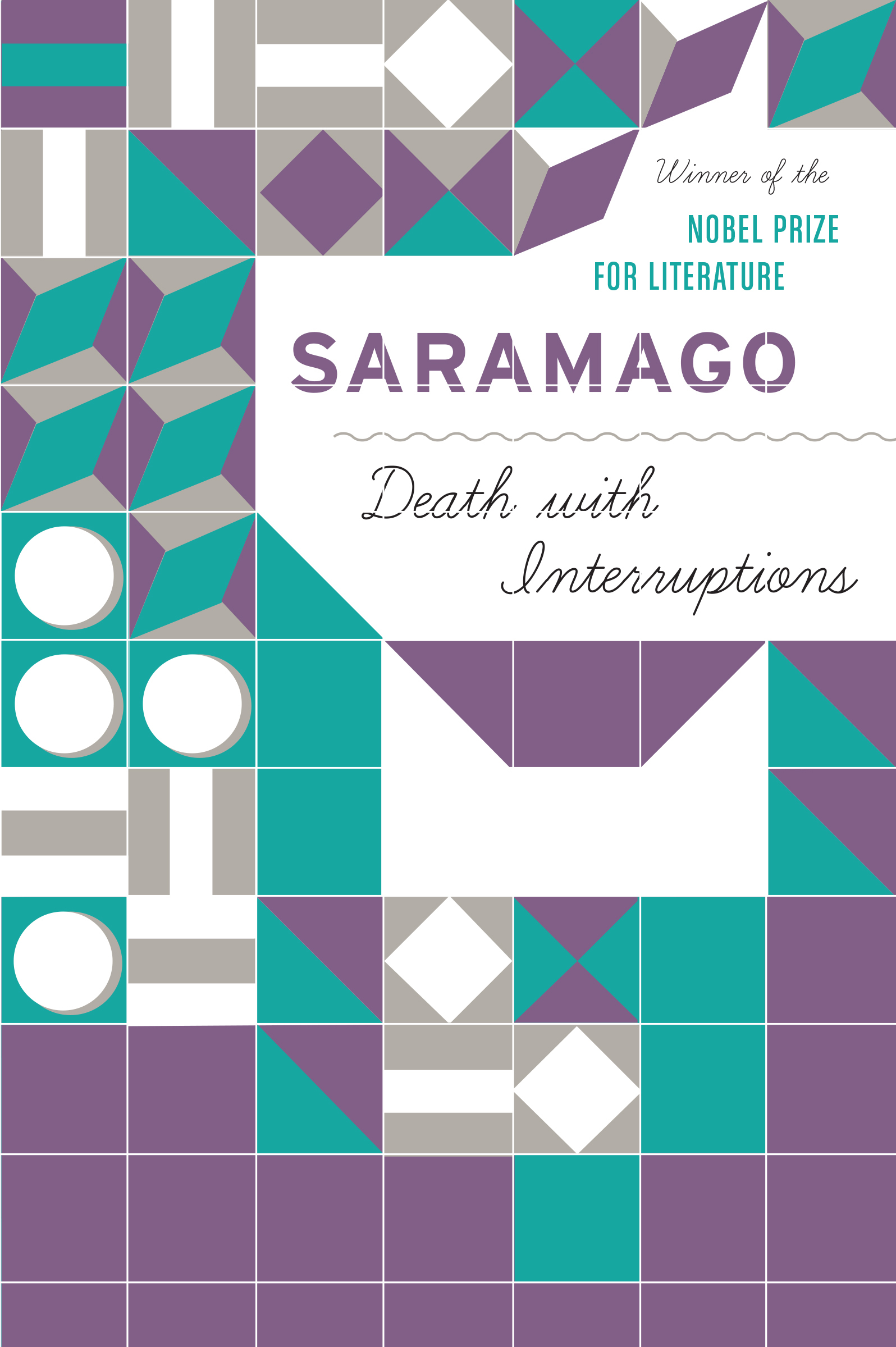