Dead Is a Killer Tune

In the seventh installment of the popular Dead Is series, Jessica and the other viragos must find who is responsible for the haunting music that is compelling Nightshade residents to commit crimes. Can they find out who is "behind the music" before it’s too late?

High school freshman Jessica Walsh is a Virago—a woman warrior who must protect her hometown from danger. And in Nightshade, California, trouble is always lurking. At the town’s Battle of the Bands, Jess’s boyfriend, Dominic, and his band, Side Effects May Vary, are up against Hamlin, a band so popular, their fans follow them everywhere. Soon, the competing musicians are doing risky, illegal, and even fatal things—and claiming that they heard strange music that compelled them to do it. Can Jess and her friends track down the tuneful tyrant before it’s too late?

About the author
Marlene Perez

Marlene Perez is the author of eight books in the Dead Is Series, including Dead Is The New Black, an ALA Quick Pick for Reluctant Young Adult Readers. She lives in Orange County, California. Visit her website at www.marleneperez.com.

The bad thing about being a virago wasn’t the mysterious whirling tattoo, my hard-as-nails trainer Flo, or even that I regularly put my life in danger to keep Nightshade safe.

All of those things I could handle, but what I couldn’t handle was arguing with my parents for the thousandth time about why I couldn’t watch my little sisters.

My best friend, Eva, had no sympathy. "Why not tell them the truth?" she asked when I called her to complain about their unreasonable attitudes.

"You have met my parents, right?" I responded. I couldn’t think of two people less likely to believe that werewolves, vampires, and witches lived in Nightshade, or that it was my sworn duty to protect them. Or fight them. It depended upon the day of the week.

A few years ago, my big brother Sean went all furry and my parents didn’t even notice.

My mom didn’t even blink when Sean started shoveling two-pound slabs of rare meat down his gullet for breakfast, lunch, and dinner.

She just mumbled something about growing boys and then asked me to do the laundry.

Eva had been talking, but I’d missed half of it, probably because I was still thinking about my parents. Or maybe because her pet raven, Poe, was croaking "Nevermore!" in the background.

"I knew mentioning Dominic would get your attention," she replied.

I didn’t even bother to deny it. "What about him?"

"I asked if you and Dominic wanted to go out with Evan and me this weekend. There’s a VP triple feature."

"Your parents or your boyfriend?"

"He’s not my boyfriend," I insisted. Dominic Gray was the lead singer of Side Effects May Vary—all six foot three, blond, blue eyes, and high cheekbones of him.

We’d gone out a few times, but calling him my boyfriend was definitely premature. Especially since I had the distinct impression he’d been avoiding me lately.

Eva lost interest in the subject of my pathetic love life and hung up a few minutes later.

I stayed by the phone and brooded. Dominic and I had grown closer since we had saved Eva from becoming a brain-munching zombie, but I still sensed some reserve in him.

Maybe it was because I was high-risk as a potential girlfriend. As a virago—a woman warrior—I got hit a lot, and sometimes nasty things wanted to eat me. I’d had a run-in with a hungry chupacabra a few months ago, but it had been quiet in Nightshade since then. Almost too quiet.

When my parents came home and let me off the hook, I headed for the library. I had a new assignment from my guitar teacher. My favorite librarian, Ms. Johns, was working at the reference desk.

"Jessica, I haven’t seen you around lately," she greeted me. Ms. Johns had a mass of curly brown hair and a smile that practically made you smile back.

"Hi, Ms. Johns. I was hoping you could help me. Does the library have any sheet music? My guitar teacher wants me to learn a new song and she’s letting me choose it."

She pointed me in the right direction, and I spent time thumbing through the selections. Nothing seemed right, though. I hated to part with my precious allowance money, but it looked like I might have to.

Ms. Johns came up as I was leaving. "No luck?" she asked.

"Not really," I said. "I’m looking for something really different."

"I know of an estate sale on Saturday," she said. "Mr. Lindquist played several instruments for years, but he’s moving to Florida and is selling almost everything. Maybe you can find something there." She wrote down the address on a piece of paper and handed it to me.

I liked the idea of performing something unusual, maybe even something my teacher, Ms. Minerva, had never heard before.

Saturday morning, it was foggy and rainy, which didn’t make Eva happy.

"Remind me why we had to get up at the crack of dawn?" Eva complained as my mom dropped us off at the estate sale.

I gestured to the dozens of cars already parked in the street in front of the house. "This is why," I told her. "Mr. Lindquist is a serious collector. Musicians from all over California are coming to this sale."

As if to prove my point, a pasty-looking guy in leather pants and a vest without a shirt stepped out of a black town car. He groaned and fumbled for his sunglasses.

I nudged Eva. "He’s clearly not used to getting up this early either."

The house was a typical-looking tract home on the outside, with a two-car garage, beige paint, and a manicured lawn. Music notes had been painted on the front door and one of the hedges was in the shape of a saxophone.

A baby grand piano stood in a position of honor in the living room, near a big bay window. Teddie Myles, the owner of the all-ages club the Black Opal, sat at the piano and touched the keys softly. Today, the purple highlights in her hair had been replaced with hot pink and lime green streaks.

On the opposite wall, above a leather couch, hung three guitars. Three amazing guitars. I went to get a closer look.

"Dominic would love this!" I exclaimed, pointing to a Rickenbacker guitar.

"What would I love?" a familiar voice asked.

I whirled around. "I didn’t know you were coming."

"Neither did I, until about an hour ago," he replied. "Aunt Katrina wanted to check it out." Dominic and his aunt were both in the band Side Effects May Vary.

Eva said, "I’m going to look for"—long pause while she figured out what to say—"something over there."

After she left, Dominic and I pretended to admire the guitars.

"I called you," I finally said, "about that triple feature tonight."

"I’ve been meaning to call you back," he said. Another long pause.

"Jessica, I wanted to talk to you about something."

"You have a strange way of showing it."

Harmony and Selena approached before Dominic could tell me whatever it was he wanted to say. Noel and Connor were trailing behind them. The guys were best friends, and I was pretty sure Noel and Harmony were dating. Connor and I had gone out a couple of times, but I broke things off and he’d avoided me ever since.

That apparently hadn’t changed because he took one look at me and nudged Noel. "Let’s check out the albums in the next room."

"What are you two talking about so intently?" Selena asked.

"This guitar," I added. I pointed to the purple Fender Stratocaster on the wall.

"Are you going to buy it, Jessica?" Selena asked. "Because if not, it would go perfectly with this outfit I just bought."

Selena didn’t even play guitar. She ...

Praise for the Dead Is series

"[Perez] delivers a wise-cracking, boy-lusting, determined sleuth of a high school protagonist . . . this quick, lighter-than-air spoof of the undead, cheerleaders and popularity is pure pleasure."—Publishers Weekly

"[A] quick, lively romp. . . . Teens looking for a breezy read will find plenty to like here."—Booklist

"Light romance and a paranormal plot are more tongue-in-cheek than scary, making this series a good introduction to the genre for younger readers."—Booklist 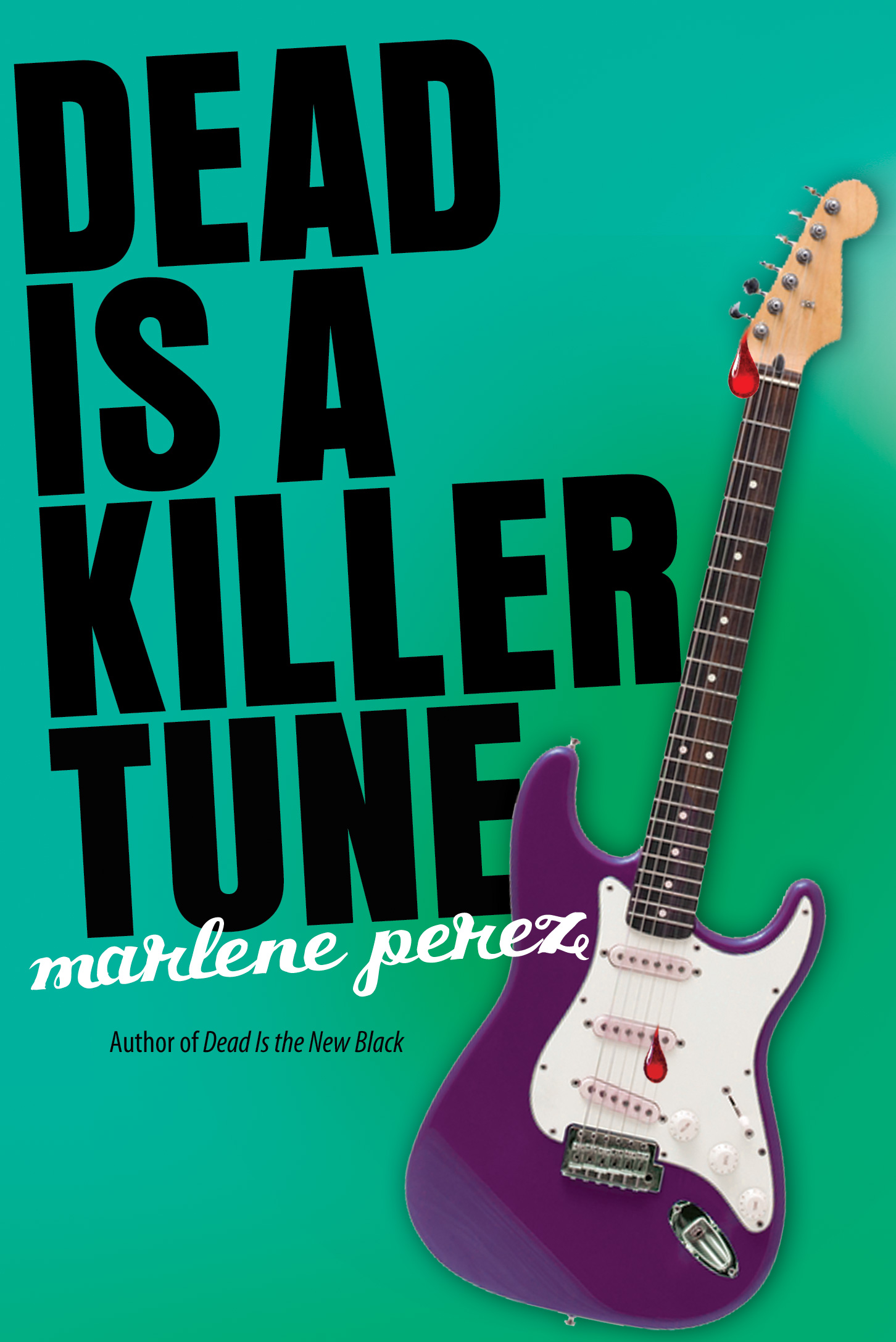