Dangerous Doses: A True Story of Cops, Counterfeiters, and the Contamination of America’s Drug Supply

In the tradition of the great investigative classics, Dangerous Doses exposes the dark side of America's pharmaceutical trade. Stolen, compromised, and counterfeit medicine increasingly makes its way into a poorly regulated distribution system—where it may reach unsuspecting patients who stake their lives on its effectiveness.

Katherine Eban's hard-hitting exploration of America's secret ring of drug counterfeiters takes us to Florida, where tireless investigators follow the trail of medicine stolen in a seemingly minor break-in as it funnels into a sprawling national network of drug polluters. Their pursuit stretches from a strip joint in South Miami to the halls of Congress as they battle entrenched political interests and uncover an increasing threat to America's health.

With the conscience of a crusading reporter, Eban has crafted a riveting narrative that shows how, when we most need protection, we may be most at risk.

About the author
Katherine Eban

Katherine Eban is a Rhodes Scholar with an M.A. in Creative Writing from the University of East Anglia. She has been covering medical fraud and health care issues for The Nation, The New Republic, Playboy, The New Yorker, Vogue, Glamour, and the New York Times Magazine. She worked as an investigations reporter for the New York Times, the New York Observer, and has been a contributing editor to New York Magazine. She lives in Park Slope, Brooklyn with her husband and Newfoundland puppy named Lola.

1. A Victim of Success

ABOARD A CRUISE SHIP TO COZUMEL, THE WEATHER SPARKLING and an Absolut and soda in hand, Marty Bradley stared at the Gulf of Mexico from inside a locked suite, his silent misery fed by thoughts of betrayal, financial ruin, and even physical danger.

He had brought sixty employees on the gleaming white ship for his company's annual blowout of dancing, gambling, and sunbathing, a reward for meeting their sales targets. But all Bradley could think of now was armed guards, locksmiths, and lie detector tests- and which of the employees on board had sold him out and gotten away with the score of their lives.

Just twenty-four hours ago, while he had been packing for the cruise, a white van had backed into an alleyway behind his Miami warehouse. Some men climbed from the van and managed to twist the dead bolt, tear off the rear metal door, and enter the warehouse around 8 P.M. Once inside, they knew exactly what to look for.

Shortly afterward, the distribution manager, René Perez, returned from his errand at Dadeland Mall and swung past the back alley as was his habit, partly because he was responsible for keeping it clear and partly because Bradley was his brother-in-law. Perez felt protective and viewed the business as a family affair.

Usually the narrow, dimly lit alley was empty. But tonight Perez saw the white van parked outside the warehouse, its motor running and its side door open. He turned and drove toward it along the dusty street. As he angled to park, a man in a long-sleeved T-shirt holding something in his hand ran from the warehouse and leapt into the van as it pulled out, tires screeching.

Perez followed, peeling down the alley behind the warehouse, almost crashing into a garbage dumpster as he struggled, unsuccessfully, to make out the license plate through the uneven street light. After about fifty yards the van barreled north onto another side street and disappeared into Miami's traffic-clogged arteries.

Stunned, Perez stopped and called Bradley at home to tell him about the burglary.

The thieves had headed directly for a freezer that contained blood products destined for patients with compromised immune systems, hemophilia, and other rare disorders. All told, they had taken 344 vials of clear liquids that for many patients meant the difference between life and death. Some of the vials cost almost $4,000 apiece. The heist was worth about $335,000.

What bothered Bradley most was not what they had taken but when. The break-in occurred just hours after the delivery of a shipment that included a rare formula called NovoSeven to help hemophiliacs form blood clots. The thieves had taken all of it. Bradley spent the next day- in the hours before boarding the cruise- hiring an armed security guard for $8,000 a month, repairing the damaged door, and installing new locks and metal gates for $150,000. He also arranged for several of his employees to take lie detector tests.

Then he reported the theft to the Bureau of Statewide Pharmaceutical Services, a regulatory requirement that was sure to solve nothing. The inspector he knew there, Cesar Arias, a tousled Cuban-American with a chipped front tooth whose heart was certainly in his job, had no juice whatsoever. One glance at the man's car, a dilapidated blue Buick that looked like it had been pulled off a junk heap, told the story of his agency's budget woes.

The local cops took a report, but they were too busy chasing cocaine and other street drugs to care much about a theft of clotting factor.

But Bradley knew the stolen vials posed a serious danger. The medicine inside was for critical care. It had to remain motionless at a constant temperature and could only be transported with careful planning. At best, it would become useless to a patient and at worst, might do harm. Bradley also worried that the men in the van would return. Or that next time they would come back armed when his employees were there.

Bradley shared these fears with two of his managers, who also stayed in their cabins during the cruise, drinking and avoiding the festivities. On the last day during the group photograph, the three men looked uneasy amid the smiling, well-tanned sales force.

Bradley was in the ship's cocktail lounge waiting to disembark when his cell phone rang. His purchasing manager, Marlene Caceras, was calling about a deal that had been offered in Bradley's absence. A small pharmaceutical wholesale company, the Stone Group, had called and sent faxes offering to sell some plasma derivatives. Bradley had done business with the fledgling company before.

The pharmaceutical wholesale market operates as an all-hours auction, with deals and discounts materializing suddenly and medicine passing through many hands. And while few patients know that these middlemen exist, much of the nation's medicine passes through companies like Bradley's BioMed Plus and the Stone Group. On this deal, the Stone Group had made a typical pitch.

But as Caceras read off the details of the offer, Bradley said, "I don't believe it." Everything she mentioned-including twenty-two vials of NovoSeven at 1.2 milligrams, another twenty-nine at 4.8 milligrams, along with specific amounts of Gammimune, Gammagard, and Iveegam, all for the steeply discounted price of $229,241-was identical to his list of stolen goods, right down to the specific quantities. The medicine was too rare and was almost never traded freely. Bradley knew the medicine was his.

All rights reserved. No part of this publication may be reproduced or transmitted in any form or by any means, electronic or mechanical, including photocopy, recording,

or any information storage and retrieval system, without permission in writing from the publisher.

Requests for permission to make copies of any part of

the work should be mailed to the following address:

"In a style reminiscent of some of the best detective storytellers, Eban takes us breathlessly through robberies, back-room deals, cluttered and dirty warehouses, crooked dealers, sociopathic profiteers, shell companies, and state and federal laws so porous that convicted felons can become prescription-drug brokers."--The Boston Globe

"A riveting account of a 2 1/2-year investigation in South Florida . . . As Eban recounts, the scam was broken wide open by a 'ragtag' group of seasoned investigators who seem as if they were cast right out of an episode of The Wire."--Bernadine Healy, U.S. News & World Report 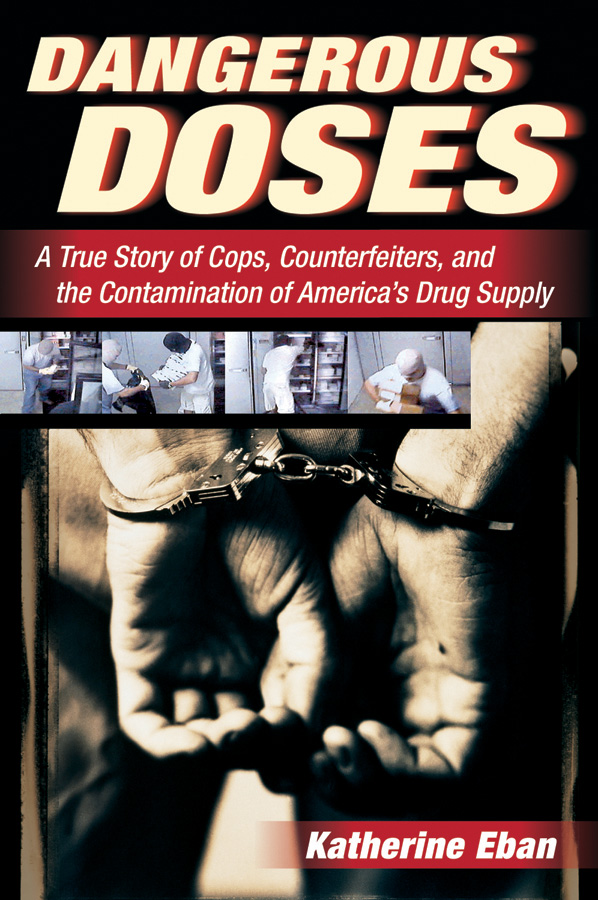