An unwelcome engagement, a mysterious plot that hints at treason--if she's not careful, Peggy's adventures in the court of King George could end in murder! This rollicking companion to Palace of Spies continues the delightful story of Peggy Fitzroy, lady in waiting, hopeless romantic, and spy.

“A rollicking spy caper in corsets. . . . This witty romp will delight fans of historical fiction as well as mystery lovers.” —Kirkus Reviews, starred review of Palace of Spies

As a lady in waiting in King George’s London court, Peggy has survived a forced betrothal, royal scandals, and an attempt or two on her life. And now she has a new problem: her horrible fiancé has returned to claim her! To save her neck, or at least her hand in marriage, Peggy joins forces with her cousin Olivia and her sweetheart, Matthew. But if she doesn’t play her cards right, her career as courtier and spy might come to an end at the bottom of the river Thames . . .

About the author
Sarah Zettel

SARAH ZETTEL is an award-winning science fiction, fantasy, romance, and mystery writer. She is married to a rocket scientist and has a cat named Buffy the Vermin Slayer. Visit her website at www.sarahzettel.com.

In which Our Heroine prepares for battle in the latest fashion and receives an unwelcome blow.

I begin this newest volume of my memoirs with a frank warning. Soon or late, there comes to the life of every confidential agent and maid of honor an order she wishes with all her heart to refuse.

In my particular case, it involved dinner.

For those as yet unfamiliar with these memoirs, my name is Margaret Preston Fitzroy, though I am more commonly known as Peggy. Until quite recently, I was an orphan girl, living in a state of dependency with my banker uncle, his kind but silly wife, and my dear, dramatic cousin, Olivia. This evening, I sat in my dressing closet at St. James’s Palace, trussed up tightly in my corsets and silk mantua, and trying to remember if I’d ordered everything necessary to entertain those same relations in royal style.

“You’re certain the kitchen agreed to the partridges?” I asked my maid, Nell Libby.

“Yes, miss,” Libby answered through clenched teeth. This was not because I had asked her this same question three or four times in the past hour. At least, not entirely. Rather, it was because she had a mouthful of silver pins and was endeavoring to fix my hair in the latest style.

“What about the jugged hares?” I demanded. My own voice was somewhat muffled from my efforts to keep my teeth from chattering. It had begun to rain outside. Even in the windowless dressing closet of my equally windowless bedchamber, I could hear the steady pounding over the roofs. Each drop carried winter’s brutal promise and dragged another icy draft across the wooden floor. My fire was roaring, and I was being positively profligate with the candles, but my rooms remained cold enough that my fingertips had achieved a truly arresting shade of blue. “And the chianti? It’s my uncle’s favorite wine. Ormand did say he’d have an extra bottle laid by for us?”

I don’t believe I had put in as much effort preparing for any court function as I had for this meal. I had spent the better part of the last two weeks arranging for room, food, and drink, all the while assuring the clerks of the household (mostly truthfully) that I could pay for it all and that, upon my sacred honor, my little entertainment would not add extra expense to the royal housekeeping.

Had it been up to me, I would have never laid eyes upon my uncle again. He might have taken me in after my mother died, but we had never warmed to each other. Matters rather came to a head this past spring when he betrothed me to a young man with whom I later shared a mutual misunderstanding. That is to say, I attacked him. To be perfectly fair, though, he did attack me first. This wholly rational argument, however, failed to carry any weight with my uncle, and his response was to throw me out into the street. That the entire unhappy affair ended with my taking up residence in the royal court came as something of a surprise to all concerned. As did the interlude in which I masqueraded as one Lady Francesca, who, it was discovered, had been murdered.

I hasten to add that none of this was actually my own doing or idea. Well, almost none. That is to say, very little.

This admittedly extraordinary run of events had an appropriately extraordinary ending. I now enjoyed a certain amount of royal favor and a post at court. It had not, however, served to mend the rift between myself and my uncle. For my part, I had rather hoped to let that particular matter lie. Unfortunately, my new mistress, Her Royal Highness Princess Caroline, had other ideas.

“Sir Oliver Pierpont is your uncle and legal guardian, Miss Fitzroy,” she reminded me, with a hard tap of the royal index finger against the back of my hand. “Whether or not you relish the relationship. You will make peace with him, or trouble will come of it.”

She was right. More important, she was Princess of Wales. That fact limited the replies I could make to being lectured or poked. I could not, for example, inform Her Royal Highness that I would much prefer to be removed to some place of quiet retirement, such as the Tower.

“I’ve made sure of everything, miss. I promise you.” Libby might have been behind me, but the face she pulled showed clearly in the looking glass on my vanity table. “Now, hold still, or I’ll have this pin right in your scalp.”

“I’m not entirely sure.”

“Then you’d better be sure you sit still, hadn’t you? Miss.”

The perceptive reader will see by this exchange that my luck with maids had not improved since we last communicated. When I first came to court, my maid was a large, raw-boned woman called Mrs. Abbott. We had what might be charitably described as a troubled relationship. The fact that I once accused her of plotting murder did not assist matters. Libby, by contrast, was a tiny girl about my own age. She was so tiny, in fact, that she had to stand on a footstool to properly pin and pomade my hair. Her olive skin and dark eyes might have indicated descent from a Spaniard, or a Roman, or a Gypsy rover. Libby pretended ignorance on the matter, and I pretended to believe her.

I might have tried to find a different, gentler person to whom I could entrust the care of my person but for one grave and overwhelming concern: Libby had mastered the New Art of Hairdressing.

It was a dread and terrible time to be a maid of honor, for we found ourselves in the midst of the storm of revolution. For women, the wig had gone out of fashion.

The wig, or more properly, the fontange, had been seen as an indispensable portion of the fashionable lady’s toilette since the days of Queen Anne. Its purpose, as far as I could tell, was to ensure woman’s rigid adherence to the first two of the Great Rules of Fashion. I will set those down here as a warning to future generations.

Rule 1: Any item of dress for ladies must be both more complicated and less comfortable than the corresponding item for gentlemen.

Rule 2: No woman may show any portion of her personage in public without it being severely, and preferably painfully, altered.

The fontange satisfied both criteria admirably. It was an assemblage of horsehair and wire framework pinned and strapped to the lady’s Delicate Head, over which her own hair was then arranged to create sufficient height and approved shape, with the whole topped off by a tall comb or similar adornment. But recently, some daring woman had appeared before the new regent of France with a smooth, sleek head of her own hair on full display. Instead of being shocked beyond endurance, the regent liked it. He liked it, and he said so. Aloud. In public.

Thus are mighty storms generated by the tiniest gust. En masse, the ladies of Versailles cast off the fontange to freely and wantonly display their own tresses. Many were scandalized, but where Versailles’s ladies led, we lesser mortals were condemned to follow.

For me, this all meant an extra hour in front of the...

Reviews
"I was completely riveted by this tale of plots against the royal house, betrayal among friends, and unreliable spies!"

"The inclusion of the Jacobite rebellion provides the catalyst for suspense and drama. All this plus a compelling heroine makes for an exciting addition to a promising series."

"Feisty, strong, and quick-witted, Peggy is a welcome change from vapid romance heroines . . . happily, at least one more title is in the works."

"Teenage girls will enjoy the focus on fashion and relationships even as Peggy boldly sidesteps her circumscribed roles as a woman and a maid of honor to reveal the truth underlying appearances." 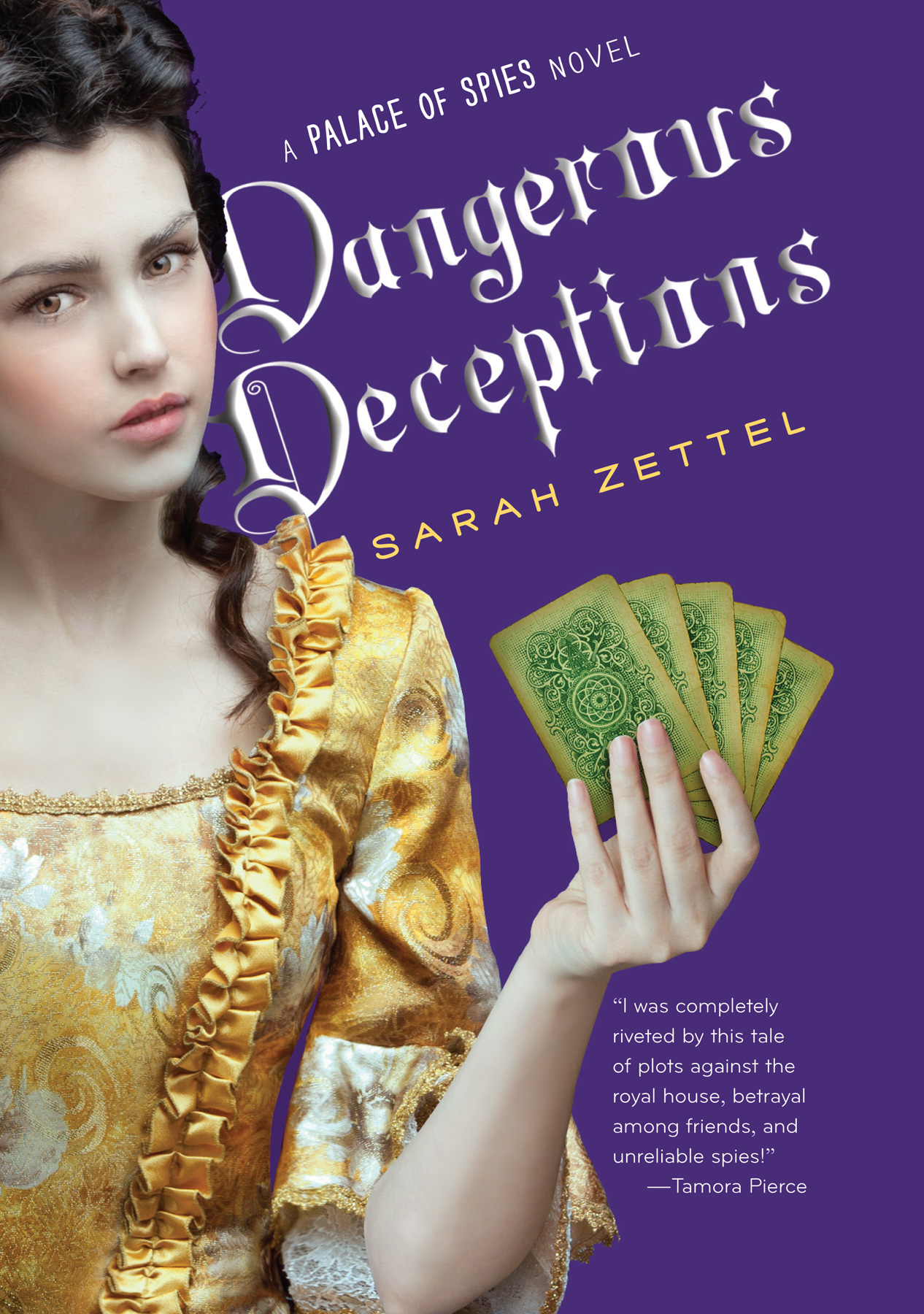