Danger at the Haunted Gate

Continue west, young pioneer—the second leg of your journey starts here—and it won't be any easier. Natural disasters, disease, and dishonest people are challenges you'll face in the wild frontier. Now, trek on the Oregon Trail to Devil's Gate! This is the second installment of four books that will take you all the way to Oregon Territory—if you make the right choices.

Continue west, young pioneer—the second leg of your journey starts here—and it won't be any easier. Natural disasters, disease, and dishonest people are challenges you'll face in the wild frontier. Now, trek on the Oregon Trail to Devil's Gate! This is the second installment of four books that will take you all the way to Oregon Territory—if you make the right choices.

In book two of this exciting choose-your-own-trail series, it's 1850 and you've been traveling for the past six weeks on foot for fifteen miles a day with your family, covered wagon full of supplies, and oxen. And congratulations—you made it to Chimney Rock. But your journey has just begun. You need to get to Devil's Gate, the halfway mark on your 2,000-mile journey west. Keep watch! Danger awaits on your way to those eerie cliffs.

Which path will you choose in the face of danger? With twenty-two possible endings, choose wrong and you'll never make it to Devil's Gate. Choose right and blaze a trail that gets you closer to Oregon City!

About the author
Excerpts

You hear the familiar blare of the morning bugle, which stirs you from a deep slumber.

“How can it be time to wake up already?” Samuel moans loudly.

“I feel like I just went to sleep,” adds Hannah.

You tug a feather from your sleeping mat and tickle Hannah’s nose. Your little sister sneezes as your kid brother giggles and rolls away. Samuel hurries out of the tent to avoid being tickled, too.

Your whole family is awake now, though it’s barely light outside. You all know the routine. You’ll help Ma build a fire to cook breakfast, while Pa takes down the tent and repacks your covered wagon. Samuel will milk the cow, and Hannah will help fill the heavy iron kettle with water for coffee.

“May I have another johnnycake?” you ask Ma when everyone sits around the campfire to eat. You’re extra hungry since you didn’t want much supper last night, and you know you have a long day of hiking beside the wagon ahead of you.

“Of course,” says Ma, as she slides another patty onto your tin plate, along with a chunk of bacon. You sigh as you bite into the salty cured meat. You’ve been eating bacon almost every day for six weeks now. It used to be one of your favorite foods before your family started traveling along the Oregon Trail, but now you wish for a fresh tomato or a fried egg. Ma has noticed that you’ve been avoiding bacon lately, and she encourages you to eat it.

“You need to eat for strength, my love,” she tells you with a smile.

You glance at the sunburned faces of your family and realize you must look the same as they do. You’ve traveled almost six hundred miles since you left Independence, Missouri, back in May.

The journey has been long, with fifteen miles of walking every day. You’ve learned to live with the pain of the blisters on your feet and the ache in your legs. The wagon is too full of stuff for you to ride in, so there’s no choice but to keep hiking day after day.

The trip has been exciting, too. So far your wagon train has mostly crossed flat plains, but you’ve also seen some huge rock formations and gorgeous waterfalls. You’ve met Native American people from the Osage and Otoe-Missouria tribes, and even been face-to-face with a grizzly bear! The bear was more excitement than you wanted. Best of all, you’ve made friends with other kids in your wagon train. Eliza and Joseph, whose father Caleb is the wagon train captain, have been the most fun.

You scramble to wipe your plate clean. Hannah runs to place the dishes in the wagon, while Ma throws dirt on the fire to put it out.

The first of the wagons starts to move, and Pa drives your oxen team to the middle of the line. You’re glad you’re not at the end today, where the dust from the other ten wagons is the worst. Sometimes it’s so thick, you cough for hours.

It’s a clear day, and you can still see Chimney Rock in the distance behind you. The tall, pointy rock is just as impressive as the first time you spotted it, several days ago. Your family had a good time camping at its base, and you carved your name on the rock, like other pioneers did before you.

Best of all, Pa used his skills as a carpenter to build things for others on the Trail in exchange for a cow, which Hannah named Daisy. Now your wagon train has three cows, which provide fresh milk. Even better, Ma hung a small container of milk on the wagon yesterday. All the shaking and bumping of the wagon turned it into creamy butter, a real treat on your johnnycakes this morning.

“Guess what’s coming up ahead?” Joseph says, as he falls into step next to you. You know that the mountainous part of the Trail is beginning, and you’ve been on the lookout for the next landmark.

“That’s right,” Joseph says. “But do you know how it got its name?”

“How?” you ask. Joseph is always full of information. When you first met him, you thought he was a know-it-all, so you didn’t really like him. But you soon realized that he isn’t a show-off. He’s just really smart and helpful, and he likes to share what he knows.

“Scotts Bluff was named for Hiram Scott, a fur trapper,” Joseph tells you.

“So?” you say. You know that fur trappers make money by trapping animals and selling their skins.

“Well, Scott got really sick out in the wilderness, and the other trappers he was with thought that since he was about to die anyway, they could just leave him alone and continue their trip without him. That was sixty miles from the bluff,” Joseph says.

You shiver, remembering how you’ve passed lots of graves along the Trail. You know that the risks of your travels include disease and death, but it’s something you don’t let yourself think about too much.

Joseph continues: “Scott didn’t die where the trappers left him, and he crawled all the way to the bluff. His bones were found there months later. That’s why Scotts Bluff is named after him.”

You stop for a minute, and make a face as you imagine that terrible journey.

“I don’t know,” replies Joseph. “But I heard it’s not easy to get through.”

That night, as you lay in your tent, you think about the scary story Joseph told you. You shiver under your warm blanket, grateful for the sounds of Samuel and Hannah’s breathing beside you, because it soothes you to sleep.

The next afternoon, you see steep cliffs rising above the plains, and you know you have almost reached Scotts Bluff.

Caleb calls a wagon train meeting when you halt for the afternoon break. You listen quietly and chew on a piece of buffalo jerky, while the grown-ups talk.

“We have a choice,” explains Caleb. “Either we try a shortcut through a gap in the cliffs, or we go the steadier, longer way around them.”

“What is the disadvantage to going around them?” Pa asks.

“We should be able to make it in a day, but the route is dangerous and unknown. There is no map.”

Everyone starts to debate. You’ve been rush... 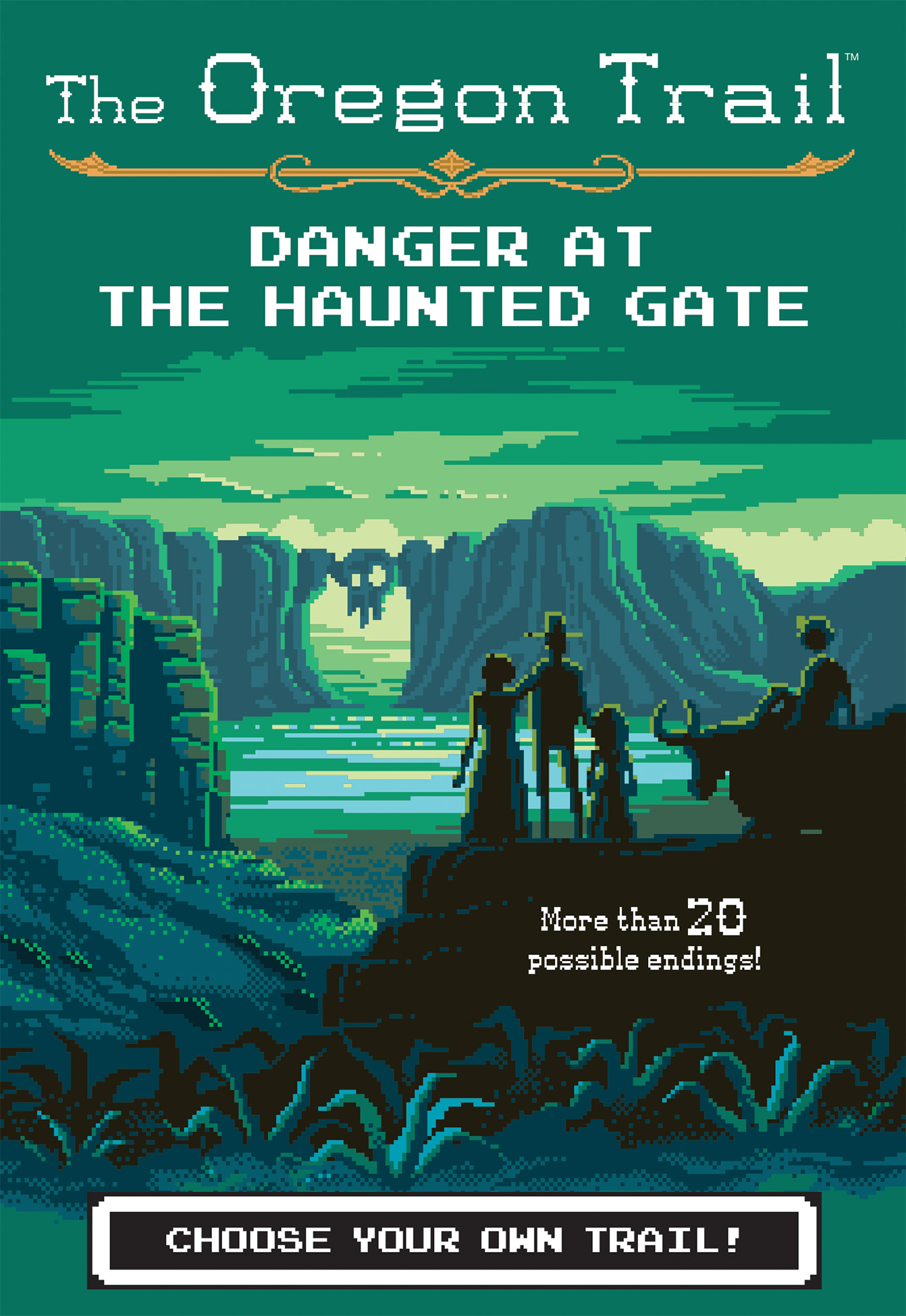