—Jami Attenberg, author of All This Could Be Yours

A #1 Irish bestseller, Sinéad Gleeson’s essays chronicle—in crystalline, tender, powerful prose—life in a body as it goes through sickness, health, motherhood, and love of all kinds.

—Jami Attenberg, author of All This Could Be Yours

A #1 Irish bestseller, Sinéad Gleeson’s essays chronicle—in crystalline, tender, powerful prose—life in a body as it goes through sickness, health, motherhood, and love of all kinds.

I have come to think of all the metal in my body as artificial stars, glistening beneath the skin, a constellation of old and new metal. A map, a tracing of connections and a guide to looking at things from different angles.

We treat the body as an afterthought, until it no longer can be. Until the pain or the pleasure is too great. Sinéad Gleeson’s life has been marked by terrible illness, including leukemia and debilitating arthritis. As a child, she bathed in the springs of Lourdes, ever hopeful that her body would cooperate, ever looking forward to the day when she could take her body for granted. But just as she turns inward to explore her own pain, and then the marvel of recovery, and then the arrival of her greatest joys—falling in love, becoming a mother—she turns her gaze outward. She delves into history, art, literature, and music, plotting the intimate experience of life in a women’s body across a wide-ranging map. From Nick Cave to Taylor Swift, Botticelli to Frida Kahlo, Louisa May Alcott to Lucy Grealy, Constellations is an investigation into the different ways of seeing, both uniquely personal and universal in its resonances.

In the tradition of some of our finest life writers, Gleeson explores—in her own spirited, generous voice—the fierceness of being alive. She has written “a book [that] every woman should read” (Eimear McBride).

About the author
Sin&eacute;ad Gleeson

SINÉAD GLEESON is a writer, editor and freelance broadcaster. She has been published in Granta, among many other places, and is the editor of three award-winning short anthologies, including The Long Gaze Back: An Anthology of Irish Women Writers. Previously, Gleeson presented The Book Show on RTÉ Radio One in Ireland. She currently lives in Dublin.

WINNER OF THE IRISH BOOK AWARD

“Bell-clear and immaculately hewn throughout, Gleeson's voice is also strikingly muscular and dexterous . . . Her voice and what she says with it is everything her body hasn’t been — vigorous, adamantine, assured . . . Powerful registers are struck, and always there is something linking the discussion back to what is for the writer the most tangibly immediate components of her life. This is where she cracks you wide open . . . You’d need a heart of stone to resist these hymns and paeans . . . A book brimming with vitality and sincerity.”

“Gleeson is an eloquent storyteller, and the stories are held in delicate balance with the analysis of her world.”

“Sinéad Gleeson’s essay collection brings together passionate, transcendent essays about bodies and art, ghosts and womanhood, grief and motherhood, and what it’s like to live in a body that fails you. Like the perfect title indicates, this is a glistening ensemble of pieces that live on their own but, all together, form a powerful emotional universe.”

“Outstanding . . . wide-ranging, intimate, and expressive . . . it’s clear that Gleeson’s insight is hard-won, and that, like the women who inspire her, she has found a way to transmute her experience into something powerful that demands to be heard.”

“Gleeson’s eye for detail, particularly the absurd or tragic, is dangerously sharp. She is a thoughtful writer who emerges from her illnesses resilient and unbowed.”

“Dazzling . . . Things are changing, thanks to tireless campaigners like Gleeson. These essays are political and they tell of how a life can be saved several times and lived to the full, despite great pain, despite great obstacles.”

“An eloquent collection of essays on health, parenthood and the brutality of being a woman inhabiting a body.”

—Harper's Bazaar, “Irish writers are taking over literature—These are the seven you need to know about”

"This stirring collection of personal essays from Irish radio broadcaster Gleeson effortlessly renders pain, both physical and emotional, into prose...While 'in illness it is hard to find the right words,' Gleeson’s strong work shows it is worth the effort to search for them."

“An extraordinary piece of writing—beautiful, life affirming, and full of heart.”

“Gleeson’s writing is honest and moving and delves deep into personal experiences of sickness, health and motherhood.”

“[Gleeson] manages to beautifully weave together the individual with the universal in a way that, if needed, puts definitively to rest the tired idea that women’s writing is personal, and therefore not political . . . Her writing has the same effect as a beautifully rendered artwork; you will want to sit and contemplate it. Sentences and ideas are woven together to create an overall effect that is mesmerizing, but with a depth that will mean the ideas presented in this book linger with you.”

“With the publication . . . of Constellations, [Gleeson’s] debut collection of essays, her own literary star will be in the ascendant.”

“[A] collection of memoir, essay, and poetry [that] reads like a novel, like a conversation with a friend, like a confession. Beautiful and important, confirmation, as if we needed it, of the ability of women (and this woman in particular) to overcome the most difficult personal circumstances.”

—Kit De Waal, for the Guardian, "The best books by women of the 21st century”

“Its translucent, engaging prose can easily slip by in a single sitting, so persuasively hypnotic is our narrator . . . An undoubtedly feminist writer, Gleeson writes with great nuance . . . Constellations, along with Emily Pine’s Notes to Self and Maggie O’Farrell’s I Am, I Am, I Am, succeeds in reclaiming the essay . . . and reinvigorating it as a living and vital thing.”

“[Gleeson’s] writing is eclectic and consummately delivered . . . Gleeson excels at combining personal stories with wider themes, and here she looks at everything from her own personal stories of illness, loss, and grief to the lives of famous artists and writers. In a publishing world of bluster and hype, thoughtful and subtle writing like Gleeson’s is very welcome.”

“Sinéad Gleeson is a writer with passion and conviction . . . [Her] new book of essays Constellations is a tidal flow of the private and deeply political world of the body. She could be described as one of the foremost feminist voices of Ireland today; an Ireland in which the body, in particular the female body, has become a furtive ground for a new mythic imaginary . . . Gleeson brings a life force to the imaginary of motherhood, love, illness, and death.”

—Jenny Offill, author of Weather, Dept. of Speculation, and others

“Sinéad Gleeson has changed the Irish literary landscape, through her advocacy for the female voice. In Constellations, we finally hear her own voice, and it comes from the blood and bones of her body’s history. Sinéad Gleeson is an absolute force: if you want to know where passion and tenacity are born, read this book.”

"Sinéad Gleeson observes the world with grace and style and dignity.  In so doing, she captures the pulse of the wound.  A beautiful and important collection of essays."

“Sinéad Gleeson has written one of those rare things, a wise and compassionate book full of tr... 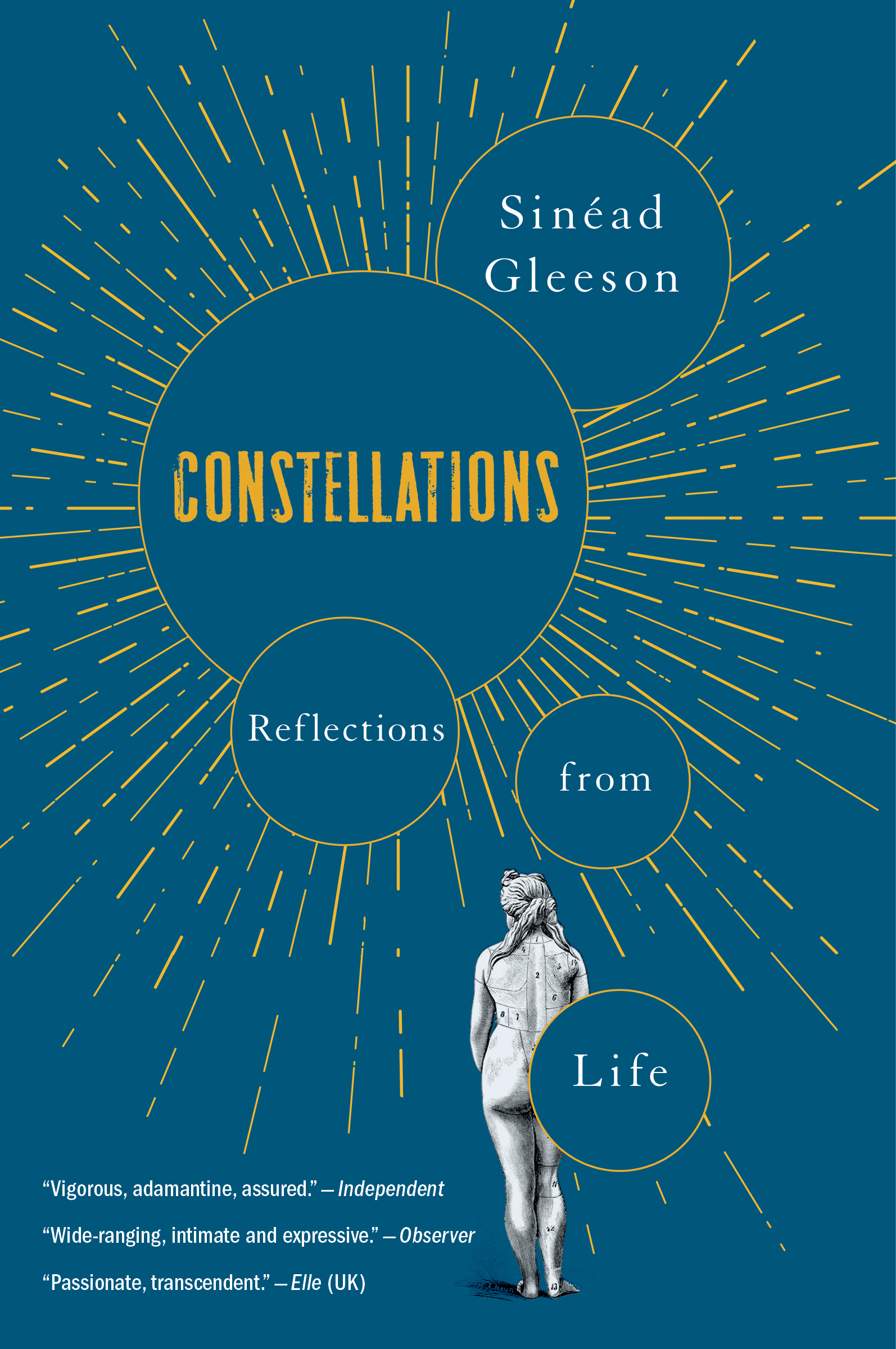